I need some help…

Attached are pictures of my Woods Bros. Driver. I bought it “New” on eBay. I’m concerned because of the condition of the insert.

What is up with the center section of the “Eye-o-Matic” ?? 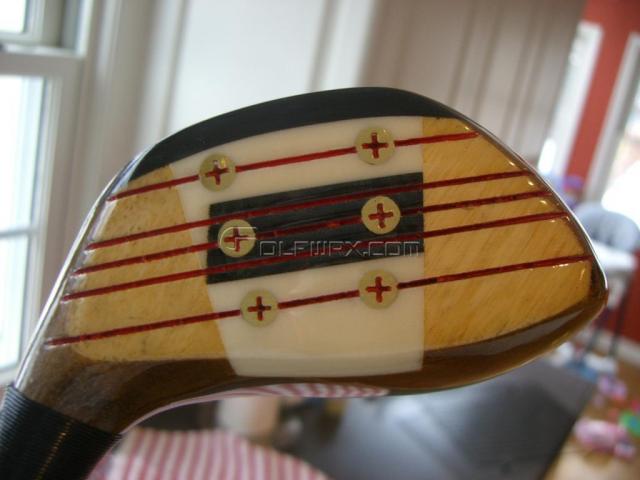 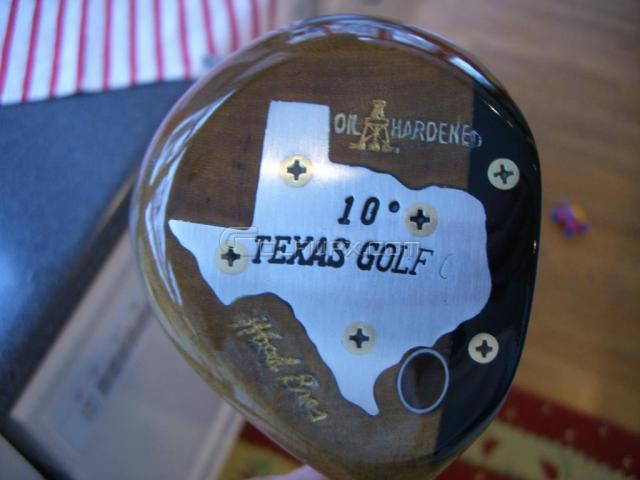 hmmmm… not that IS interesting! Perhaps you have a REAL collectors item with that odd insert.

I don’t have any way of knowing, but based on everything else in the pic it’s a hell of a good fake if it is.

It certainly has all the markings of an original mid 90s Texan. All the correct stampings are there in the correct position, ect. I know Dave Wood the founder of WB. I’ll try and run that pic by him this week and see what he says about it. You said you got the club new, then it was refinished. Was the insert like that when you got it before it was refinished?

Happy,
I sent Dave Wood a pic of the insert that you posted and here is what he said:

No, I have not seen anything like that before. If its a genuine WB Texan, the insert is NOT the original. Not even a possibility.

We made all of our inserts in-house. They were made from large sheets (think plywood) of 3/8" thick white paper fiber that was cut into 4’ x 3.5" strips. In stage 2, the centers of the white fiber strips were channel cut in a milling process. Stage 3, a 1/4" black fiber bar was epoxied and clamped into the white fiber channel. Stage 4, the 4’x3.5" W/B/W strips were cut into final inset shape in a milling process that was fixtured to render precise side-wall angles. Stage 5, the top and bottom of the insert was cut in a final fixtured process that rendered an insert ready to be installed into the wood’s precise matching female cavity. There was zero scrap.

Looking at the picture you sent, all looks right. The face profile, radius route on the black slip, the Reed Prince screws, scoring line orientation. (low whipping is suspect)
The insert is an eye sore. I suspect that its a molded ABS, or possibly an epoxy pour. Don’t know…

A couple of other things about the WB that Happy has:

Rob,
I see what you mean about the screws. I think the score lines might have been recut during the refinish and because they are slightly thicker, the screws look closer to each score line because of this. I bet a new insert was put in, then the face was rescored. This club also has the new modern wider tip shaft I think because the bore thru is slighly larger than the normal standard bore for a taper shaft. Not sure what purpose the screw has when put into the bore , but I’ll see if I can find out.

Thanks for everyone’s input.

I go the club on eBay last fall…
Originally, It had an R300 Shaft…

I did have the club “reshafted” at GolfWorks just this last month. They might have re-whipped it differently…
I did have GolfWorks “refinish” club to a different color…

I’m gonna be disappointed if indeed I got a “bad club”. If there is a way to have the club “fixed”, please let me know. I haven’t hit it yet.

Rob,
I spoke to Dave Wood today. We spoke for a long time. I did bring up the screw as he calls “the hurricane in the gulf of mexico” (Texas sole plate)… The screw really doesn’t serve much purpose and they could have done without it. He put it in his clubs really to show that the club has the original shaft. If somebody returned a club and said there was a problem with a crack in the neck or something along those lines and the screw wasn’t there, they knew it was altered and reshafted. Plus the screw gave the club a more finished look as well. Those were the 2 main reasons.

here are some pics of my Wood bros driver

I used this driver in 93 world series at Firestone. 93 International 94 Presidents Cup 95 US Open and 96 British Open…would try a few metals in between times but this always found it’s way back into my bag…

hey 96 British , maybe that makes me the last person to use a persimmon driver in a Major? they say Davis Love 3 stopped using his around the end of 95…might be a search engine look up 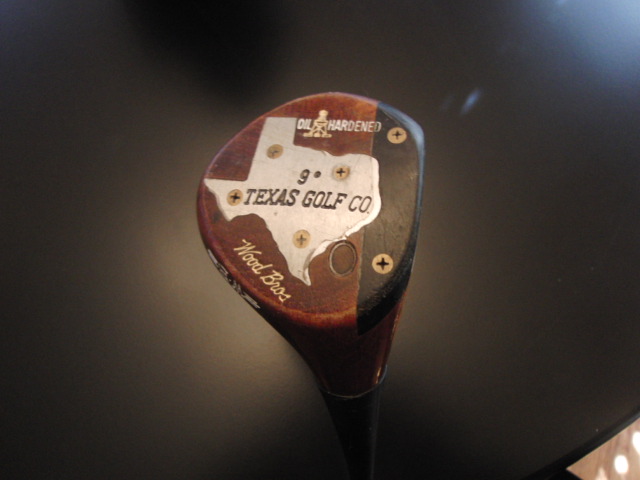 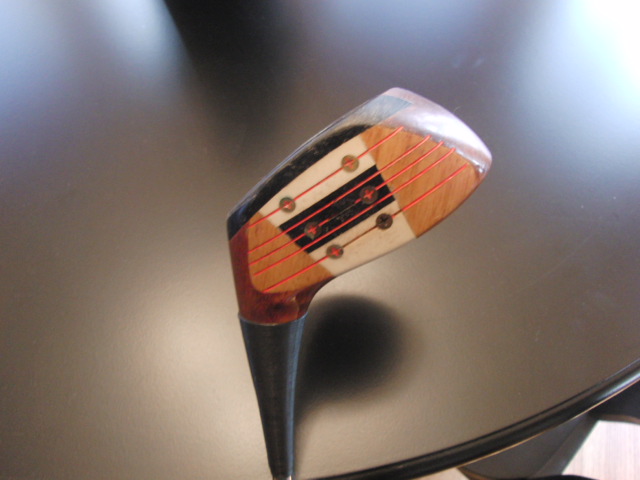 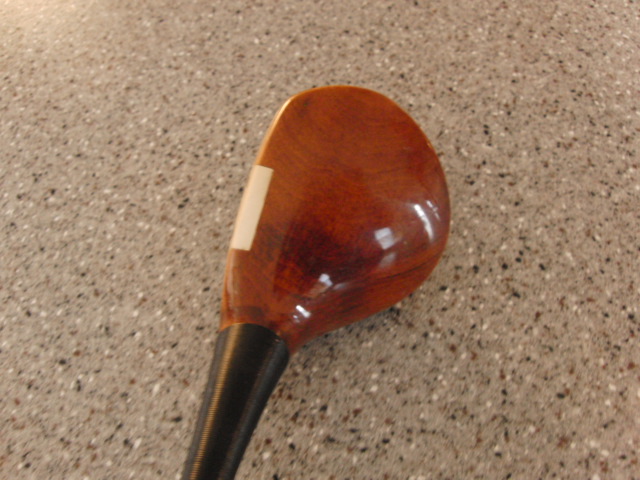 Two,
Thanks for posting the pics, funny you would post these, because I was gonna ping you and see if you would post a pic of two of some of your persimmon tour gamers. That one is great looking, awesome head shape and its still in excellent condition. I love the WB Texans, just great blocks. You sure got a lot of good play out of that one and its been around! And, yeah, you might have been one of the last Tour players to bag wood. How cool is that. Thanks again. Got the prestige balls today, btw. 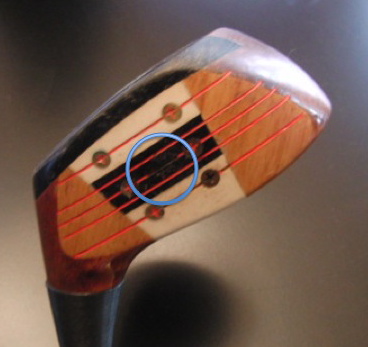 I had wash mine off so as not to embarass myself…At least no sky marks!

Bradley, your Texan really resembles the head shape of an deep face early 50s Mac. I have a 5 screws M85, the 1st “eye o matic” model , with a similar shape, min. face progression. I still like yours better

, Dave was a Master. 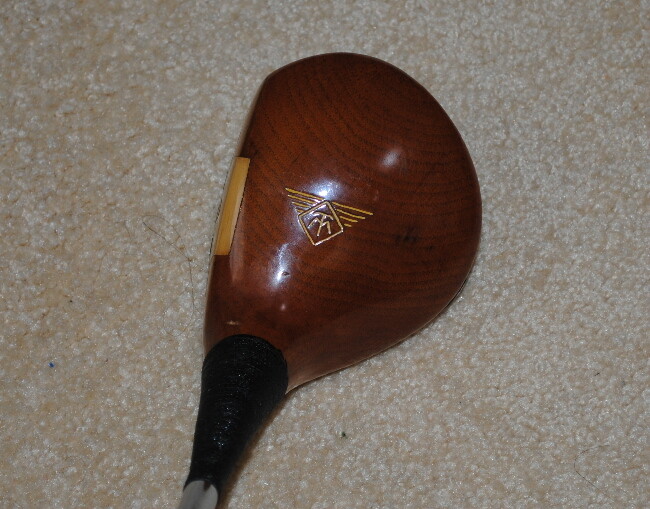 I’d like to propose a moratorium on all Wood Bros and/or pristine (or “sick”) M75/M85 driver pictures until drool-proof keyboards are readily available. At a minimum please provide advance warning of picture content so viewers can be duly prepared.

This applies primarily to Arnie, Freddie, NRG and Two (although I would like to get a look at Bradley’s TRGA winning weapon of choice off the tee)… pictures please Bradley.

I’m not sure you could’ve gotten it more central using a tee with the head clamped in a damn vise! That says it all…good stuff, man…

I had wash mine off so as not to embarass myself…At least no sky marks!

What shaft have you got in that, Bent? It’s a beautiful thing…

Here are my Wood Brothers Driver and Three wood.
Might be the world’s only 48 degree Lie angle WB?

Bom
thanks man—it’s even better in real life!!
the shaft is the original DG S300…

I just picked up a 3 wood with same shaft—this one may need some refinishing, but I havent received it yet…pics to follow…
fun stuff!!
If you drive 4 hours north and I will let you hit it to your hearts content!

the shaft is the original DG S300…

Well the reason I asked was because if the flex had have stared with an X, then I would’ve driven 4 hours north and you never would’ve seen it again

Though hitting does sound like fun…
Chat to you later…
BOM