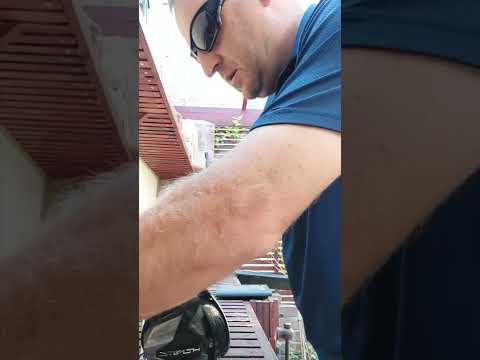 For whatever reason, I’ve not built a steel shafted modern driver yet that I loved. I have tried a few times.
I do like how you point out a modern driver head weight is very similar to persimmon. That’s a common misunderstanding. Most of the difference in total weight comes down to the shaft.

Yeah, the 2 ounce saving is almost all in the shaft. The engineers have obviously worked out there is a minimum amount of mass required in the head. You will find some that are lighter.

Interestingly hickory drivers often have very light heads, with heavy shafts so the ball goes nowhere. Took them a while to figure it out.

What steel shaft did you put in your stealth?

Excellent video NRG, thanks! Ive done this, ball got really spinny on my old callaway. And i hit dead left, bullet straight. Im very interested in how it performs being so upright…10+ degrees compared to ABS spec. Im definitely not sold on your explanation…

Have you played it?

Not played since I fitted that shaft. Out injured for the foreseeable.

Sorry to hear that, TBD then…thanks for putting in the effort. When I get my stealth, Ill try this out. I get what you’re saying, just have to try it.

I prefer the shaft switch to loading the head up with loads of weight, though I usually end up back with a graphite shaft after getting sick of my mates hitting it past me.

Instead of switching shafts have you tried back-weighting the driver? Put a 60g weight into the grip end?

My irons have lead tape under the grips, but not that much, as well as loads of weight in/on the heads.

Epoxy is drying right now on a steel shafted modern driver. Have to add some weight and a grip to it tomorrow.

Not sure the grip was a great idea, but I have big hands and appreciate back weighting. We’ll see

Youll love the feel of a wishon. Really hope you smash it!

15oz, going to be a beast that. Let us know how you get on with all that weight.

Just finished up my modern ABS, X100 extended to 46", backweighted with 10-25g tungsten plug so we’ll see how the swingweight comes out, since the plug is epoxied in.

I used a TM adapter, so im going to try all 3 heads to see what i like best.

I cant remember why we did that to this shaft, it was at least 5 years ago i used it. I think we had to to get the swingweight down from like the Gs…

Gonna be fun at least…if it does what i expect it to do, we may ne in business NRG!

I forgot to supply an update on the Wishon. Not a fan of the jumbo max grip, so I need to switch that out and try again.
BUT, It’s basically impossible to hook… I hit some slices at the range that were just incredible. When I got it just right I can hit it straight, but you really have to work.
I think it might work out with a grip change.

Keep us posted, I’m excited to hear how it works out. 46"with a steel shaft is crazy…

Pardon the golf club graveyard…shaft is far left, rest of it is rebuilt Arias irons and wedges.

But that is probably the flattest lie angle for standard setting for off the rack modern drivers that I know of. My Titleist drivers are set to 58.5 degrees lie angle at standard settings and I can only go down .75 from there.