Can ABS techniques be successfully applied to archaic golf clubs from over 100 years ago? I will soon find out.
The above video shows what I will have to work with to learn something about hickory shafted golf clubs and hopefully
a bit of history about the early pioneers of the game.

Looks like fun. I’m looking forward to some footage of those in action!

First ever shot with a hickory driver. Had to wear period gear to salute this shot off the deck.
Amazing how nice it flew on a first swing. A little butter fade with plenty of heat on it.
The feel of the shaft at impact was totally different than anything I had ever experienced.
Probably like going from an aluminum baseball bat to a wooden one. It felt quite firm during the swing,
but the impact of the ball felt like the shaft was made of rubber. Very strange indeed!

Swing looks super good as always! Im sure Hogan is smiling up above.

How much more difficult is it to hit compared to a metal shaft persimmon?

Can you feel the shaft flex?

Man i would be so afraid/hesitant to hit off the deck like you did in fear of breaking the shaft!

But of course you ball striking is far superior than mine!

I’ll know more when I get on the golf course. I only have two clubs done… and I might have to turn the 4 iron into a 1 iron because it is the longest iron I just realized. There is a 3 iron that I need to bend into a 4 iron. Then I will have a 5 iron, a 7 iron, 9 iron and W, then a putter and two woods.

I don’t like the iron heads much. The heads are too wide. It’s similar to the modern game wreckers. I might hacksaw off the toe and give it the Johnson Fernquist Tony Lema look with the squared toe. I prefer a smaller compact head. I might also have to grind down the leading edges are they are just grave diggers. Reverse bounce extreme. I don’t mind the narrow flange…but they are like razor blades.

These were probably store line models… not clubs set up for touring pros. I’ll have to research a bit to find out how the greats of that era set up their gear. Might need a trip to the library in SF or at the University of California Berkeley.

Swing looks great, as always. Is that a lead end cap or something in the first picture?

A 3 ounce fishing weight melted down and epoxied onto the back of the club. The iron heads were so light they were basically unplayable. With the shaft being solid wood, you can’t really add lead down the neck… and I don’t like to add more than half an ounce anyway doing that.

I don’t think it is any coincidence that the best ball strikers came from the next generation with heavier gear and smaller compact heads. It’s pretty comical to see that the modern club designers today are repeating the same mistakes from 100 years ago. f=ma doesn’t change change just because someone invented an iphone.

"Weight, it is inadvisable to play with light clubs. The heavier the head, within reason, the more effectually will the swing motif be implanted in the mind. Hard hitters need stiffer shafts than their fellows. Whippiness in the shaft is not a matter or personal liking at all. The stiff shaft seems to communicate some of it’s stiffness to the player. A shorter shaft lends itself to more accurate work and tends to prevent an improper use of the club. Rubber grips wear out too soon and are useless in wet weather. The upper part of the grip should be thicker so that the left hand can hold more firmly. Good hickory shafts are all to scarce and everyone ought to do their utmost to preserve those one is fortunate to possess. Wet clubs should be dried at the conclusion of a round and rubbed with a little oil. In the hot season a rubbing with oil is desirable to keep the wood from splitting.

What a great find. Im sure u chuckled reading those words lol.
Maybe send to Ely lol

These were probably store line models… not clubs set up for touring pros. I’ll have to research a bit to find out how the greats of that era set up their gear. Might need a trip to the library in SF or at the University of California Berkeley.

In case you don’t already know, there are plenty of old free golf e-books…

Also can you fly the driver over 2 beans? How far do you think you can carry it with practice?

Also can you fly the driver over 2 beans?

I cant help myself but to ask what that means? haha

Lag–what kind of ball are you going to use? Would the modern ball do harm to the woods, or have other negative side effects to the gear or swing?

I don’t think the modern ball will make much difference. I put a thin epoxy coating across the face to protect the wood… but since I am a pretty clean picker of the ball, I don’t think the pressure on the club would be more than a golfer banging down hard into the ground hitting a feathery or a gutta percha.

Because the shafts are wood, they won’t transfer as much of the energy of my swing into the ball due to the lessening of support or firmness that steel would offer. Impact feels soft even with a hard ball… because the shaft is not giving me tighter frequency response of steel. But I don’t expect the distance loss to be huge. Maybe half to one club with irons… and I would guess about 15 yards with a driver based upon what I saw hitting a couple shots off the deck. I’ll learn a lot taking them out onto the golf course when I get all the clubs set up the best I can.

My Hickory driver was already at 12.75 ounces and the shaft is equivalent to a modern X, so I just flattened it and added half an ounce. My putter is just 13 ounces, so I don’t think I an even going to try and do anything with that. I guess weight and shaft flex are just pot luck. 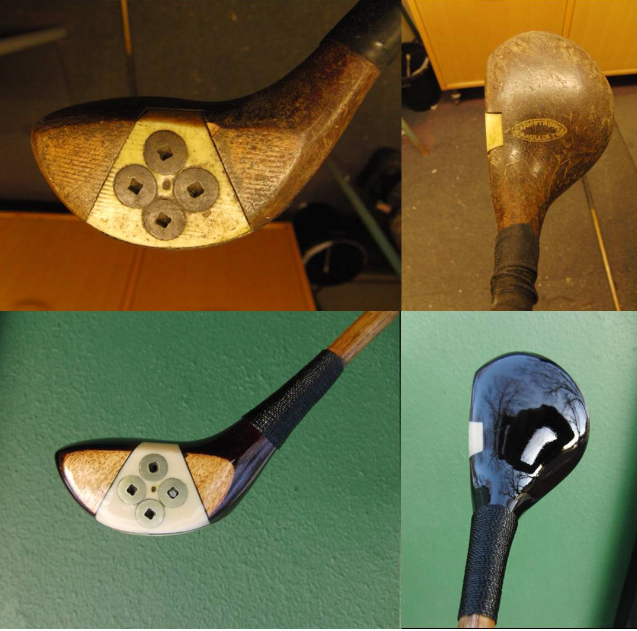 I cant help myself but to ask what that means? haha

What an interesting project! Tad Moore (the club designer) is very into hickory golf, to the extent of building new, matched sets of hickories for hickory tourney players. He also markets a modern 2-piece ball with a mesh patterned outer cover for hickory golf.

That ball is procured from the McIntyre Golf Company, who market a couple of their own balls - a similar mesh patterned ball and a modern gutta percha equivalent. The latter is handmade and expensive and there is a great web page of info on it:

There’s a good society for hickory golfers, SoHG, who run well organised tourneys. This is their great resources page but the rest of the website is well worth exploring:

There are even courses on which purely hickory golf is played on - right down to sand boxes next to the tees to allow the golfer to construct a mound of sand to tee their ball off from, to equipment to allow one to simulate different hickory golf eras. Great stuff.

Whilst it is great that hickory golf is alive and well, and has a little niche solidly carved out for itself some 60 -70 years after it was overtaken by persimmon/steel and the boom in course numbers/design that followed the 2nd WW, it is also quite sad to reflect on the possibility that a similar future might be the eventual destiny of persimmon/steel. I feel that persimmon/steel and the great “traditional” courses deserve to be more than a small, quaint niche of golfing future.

I am convinced that the best gear in the history of golf that would combine good distance with accuracy and a ball that could be worked and spun around on the greens came during the persimmon, steel, and balata age. This age also created the best golf courses and with less than perfect agronomy, players learned to play off a diversity of lies and conditions which made them much better. Finally, the best golf swings and best players came out of this era because the courses were much more interesting and articulate, required more shot shaping and accuracy off the tee as well as the precision needed to play approaches into smaller greens.

But I think the game would be far better off (as a game) if the gear limited things, rather than exploring endless possibilities.

No so dissimilar to Chess. The limits put on the movement of the various pieces are what make Chess a great game. If Chess were to explore limitless possibilities… pawns can move like rooks or bishops… or the king could move like a knight… it would lose focus as a game, and the timeless historical relevance would be diminished just as what has happened to golf.

So I think the hickory limitations are a better direction than the silliness that is going on today.

If you look at a hickory driver… the head shape did not really change in a general sense all the way into the end of the persimmon and steel age. How driver heads turned into space age titanium frying pans is beyond me. Some very very bad decision making has been going on with the governing body of this game.

If you can swing a heavy club as fast as a lighter one, you will hit the ball farther. You need speed and some weight behind it.
You can’t move the ball properly with lightweight clubs. You must have some mass, it’s the laws of physics. It has been proven.
I built my own golf clubs. The heads on irons were too thin and long. So I cut off the end and soldered it onto the back to make it heavy enough. I took the club to Forgan in Scotland and asked him to make me a whole set of them this way. It took him a week to hammer them out. So instead of names, I had him put numbers on the clubs because it was easier. No one had done that before. But the main thing was I had an iron with a shorter and more compact head and now with the weight behind the blow.