I collect all sorts of photos from different sports or disciplines that have similar movement traits to golf so I figured I’d start a thread and upload a few of them- I always think it’s interesting and helpful to see these types of connections. It’s easy get to thinking that golf is an alien practice sometimes, but it’s no different to hammering nails when it comes down to it…

I’ll start with two of my favourites… 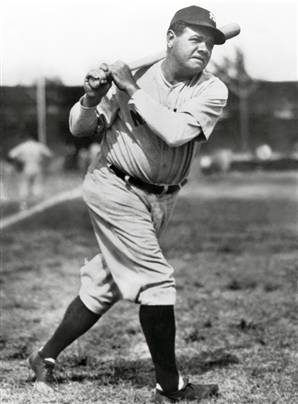 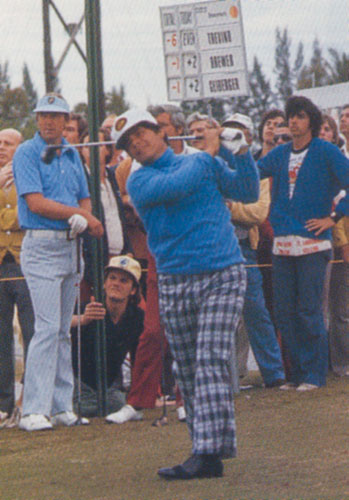 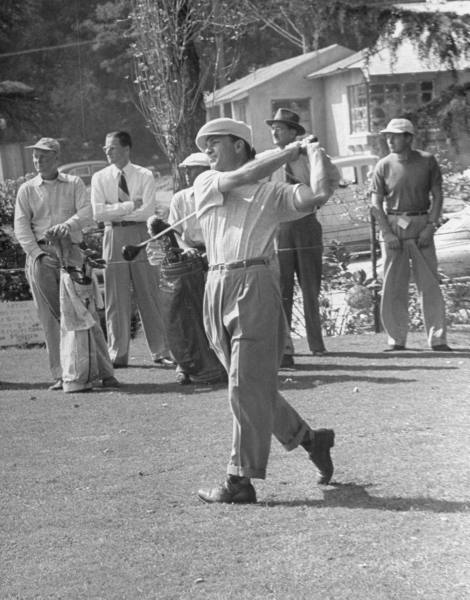 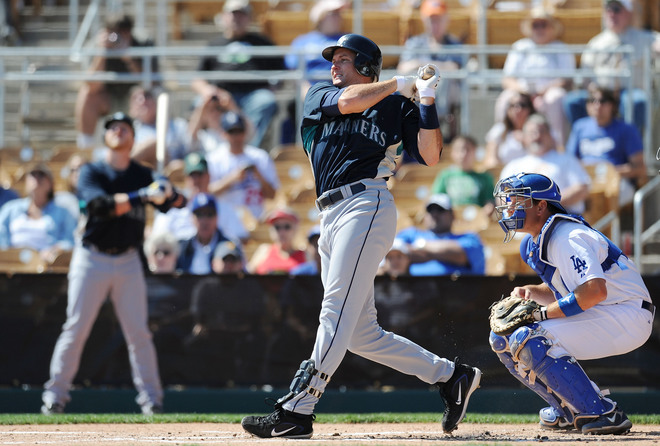 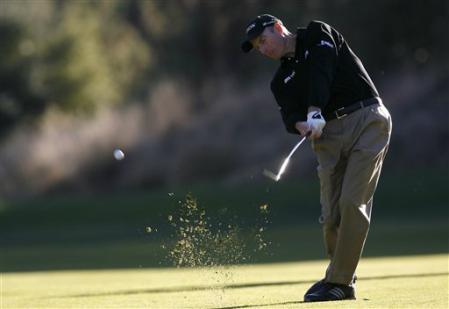 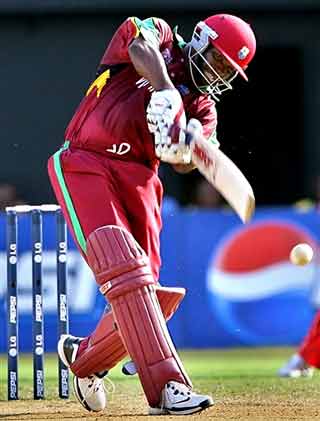 do you have more?

Yeah I’ve got a lot of stuff. I’ll keep going with them- it’s a bit of a fascination of mine. Some of them take a leap of imagination but the links are there… 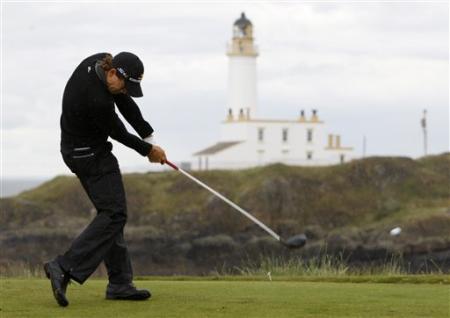 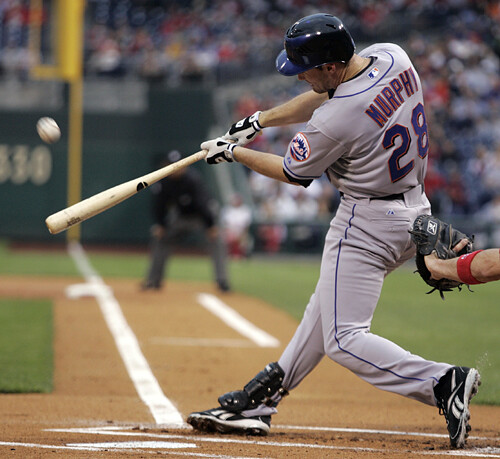 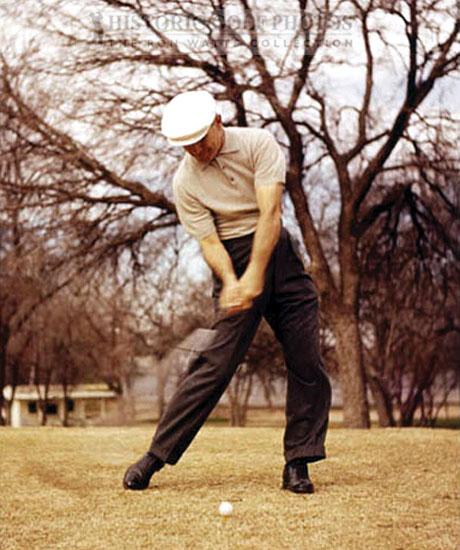 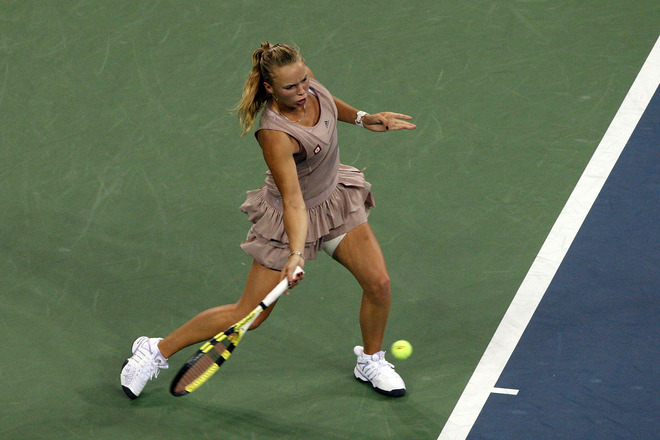 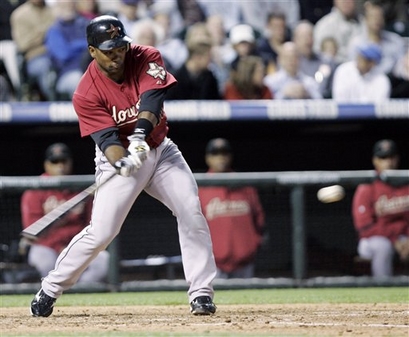 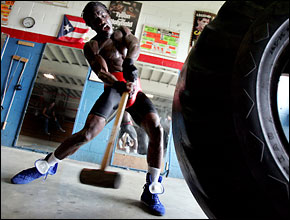 those are really cool.

I love these photos Bom!

Great pics Bom… here is a post I made in our private forum area for students. Thought it may interest you going by the pics you posted and just how close these actions are as you suggest with the photos

Postby twomasters » Sun Nov 22, 2009 10:21 pm
I just had one of my friends visit for the weekend to play some golf. His forte is actually baseball but he loves to play golf. He is the pitching coach for one of the Major league baseball teams.
Obviously as a pitching coach he is more interested in the throwing action his players use- However- he is very well versed in batting technique also as he has to watch the batters on deck and check their swings so they can decide how to pitch to them and he watches the tapes etc so they work out how to pitch to each batter. So he knows the techniques of batting and went through the various changes over the years also- which hand pulls? which hand hits? etc etc
His golf swing is pretty good. He did however have lot of hand action and pivot stop at the ball which causes him to spread the golf ball around the field a bit. So I got him working on some pivot speed after impact to get the body moving and let the hands just follow instead of them fighting his body like he had been doing. The difference was night and day- so he really got to talking about the golf wing and baseball swing as he could think of it in his terms and not be on foreign soil with the ideas.
I let him go and describe the baseball swing- how they teach the MLB players- what they look for - why the better hitters are better- why the average hitters are average- all around everything they look for as to who is a good hitter- a poor hitter- etc
He pretty much described the GOLF SWING to me- except of course the hit is from an elevated position. The lag- the pulling action- the 4.30 line in- the hitting action- the weight shift.
The only thing missing from his description was the post impact speed- As the ball club coaching believe once the ball is struck it is gone and the rest doesn’t matter much…(sound familiar???)
When he started talking about the baseball swing taking place from the feet up- I really got his attention by talking to him about ground forces and actually knowing about what I was telling him. He made particular mention of how once Mark MacGwire altered his stance, pinching his knees in (horizontal and vertical pressures ) at his batting position he was belting the ball farther and with more control and less looking effort (even with the steroids!!)- he now understood even more the logic behind what may have occurred by this stance alteration.
He spoke about some other batter of late (can’t remember his name now) who has only been a 10-15 home run hitter and has now increased his HR’s into the 30’s and is a much better hitter- He said he noticed he had shortened his arm swing, dropped the bat into a more inside path and had increased his hand speed through this shorter action… so he never struck out as much- had more power and more control!!
Where have I heard all this before?
He stayed up half the night talking about it and was dumbfounded how I had explained to him a lot of exactly what they try teach these baseball players but he hadn’t heard it spoken about with the internal feelings and the reasons why and how some of the after body motion effects happen…I got my bag out and showed him some modules and how they were all related…he was amazed
Looks like ABS thoughts may be breaking into the Major league’s now!!! Thought all that was interesting to share

Sam Byrd was a baseball player for the Yankees( known as Bath Ruth’s legs…used to be a pitch runner), then switched to professional golf…won 6 tournaments, and competed in the Masters.

I have read that his swing was described by either Bobby Jones or Hogan( can’t remember) as the best there was. Also have read that Hogan used to pick his brain about the swing. ( ref: Mike Maves’ writings)

Also, for the baseball people…isn’t the knee bend that a pitcher does during his transition a reminder of module 2?
eagle

Here is more. It takes power to get into that big back foot sit down; But it takes humungus power and training to be able to get up from there and keep the pivot (body) moving NOT hands flipping. 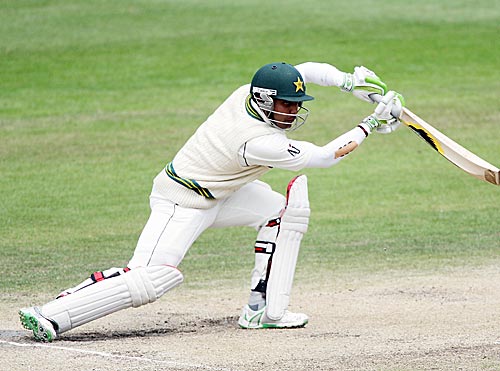 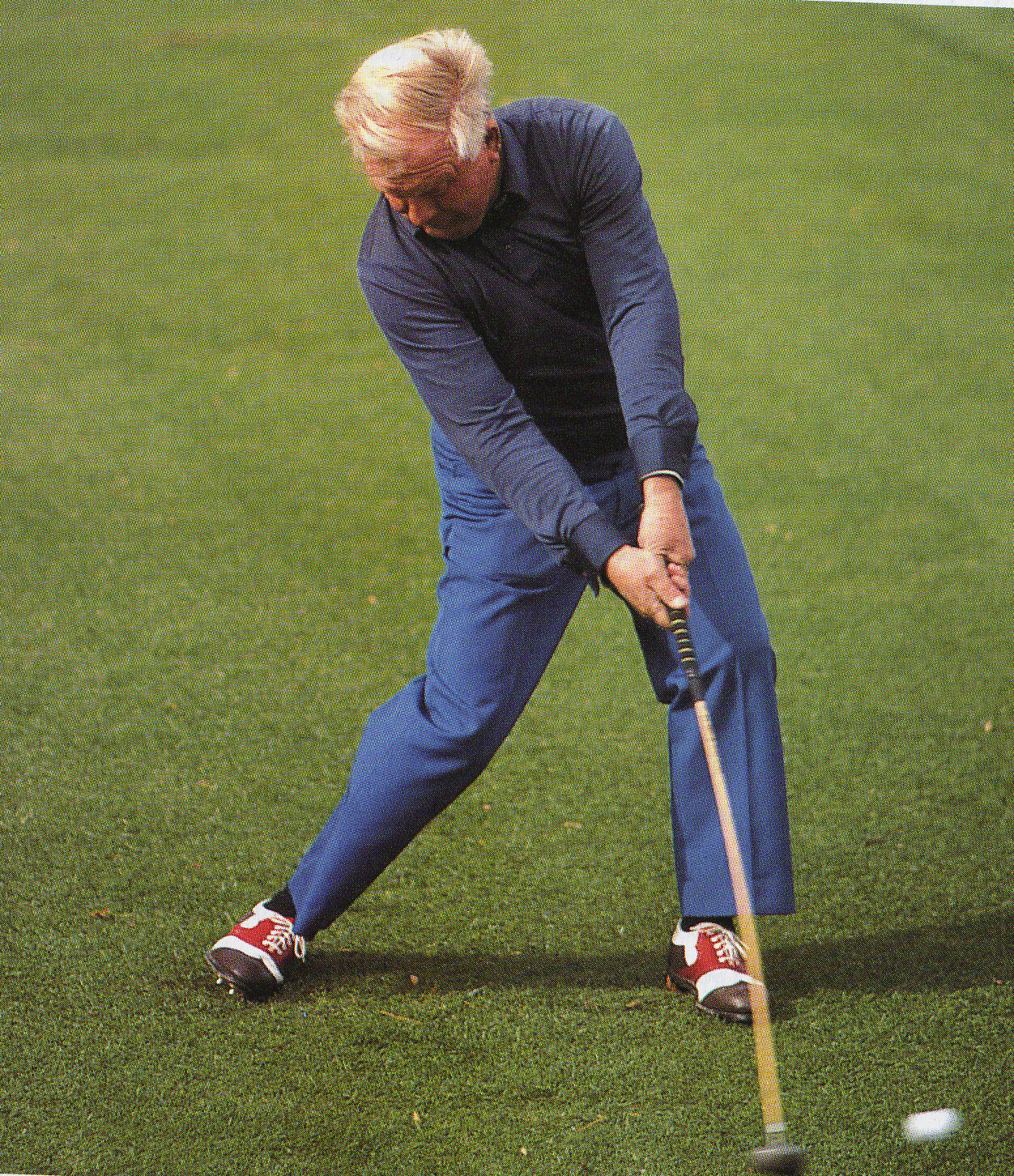 Bom, thanks for starting Small World. Thanks to everyone for posting to it. All the great images inspire and magnify learning. Talk about intent into and beyond impact, wow!

Sam Byrd was a baseball player for the Yankees( known as Bath Ruth’s legs…used to be a pitch runner), then switched to professional golf…won 6 tournaments, and competed in the Masters.

I have read that his swing was described by either Bobby Jones or Hogan( can’t remember) as the best there was. Also have read that Hogan used to pick his brain about the swing. ( ref: Mike Maves’ writings)

Also, for the baseball people…isn’t the knee bend that a pitcher does during his transition a reminder of module 2?
eagle

also…the story goes that Jimmy Ballard( “Connection”…Curtis Starnge, Hal Sutton, others) learned from Sam Byrd while working with him at an Alabama driving range.

Great stuff, Lads, I’m glad these photos register with you all. It is amazing how similarly we move in different situations, it opens up the possibility that the correct movements in the swing can be a lot more instinctive than we think- It’s one of the reasons why I believe intent is so important. If you give your brain the correct task to accomplish then it’s pretty good at getting your body to do it. But more often than not our idea of how to accomplish what we’re trying to do is the problem. Interesting stuff…

Thanks for sharing that post, Twomasters, very interesting indeed. One of the things I think about regarding post impact acceleration in baseball is the difference between lefties and righties. Lefties are naturally inclined to be better at it since their intent is towards first base which has them going that way anyway, whereas righties in order to keep accelerating well have to fight the urge to move in the direction of first base. One of the reasons I think that Babe Ruth was as good as he was- not the only reason obviously, but it didn’t hurt that he hit left handed. Another guy to look at is Ichiro Suzuki- he’s phenomenal! He’s already on the way to first before he even hits it and is the man as for as getting the bat on the ball and getting hits.

Eagle, I didn’t know that about Sam Byrd but I’ve looked at his swing a good bit since I’d heard about his link to Hogan- talk about using your legs! This guy used both of them from the start all the way through- if ever a guy looked like he was swinging a big whip with his legs it was him- it makes it even cooler that he was known as Babe Ruth’s legs-- funny… he was pretty good with the left wrist cup too!

I’ve got a little bit of a bent left elbow obsession- we’d never pull something apart with straight arms so it’s got to be important. Plus it aids in tightening the radius too… 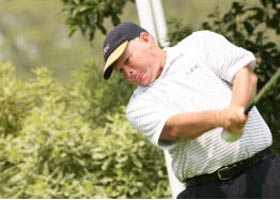 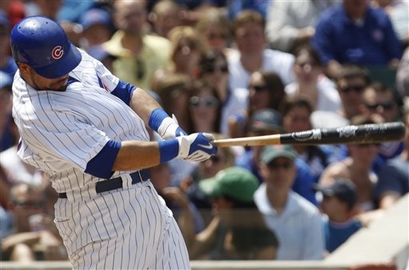 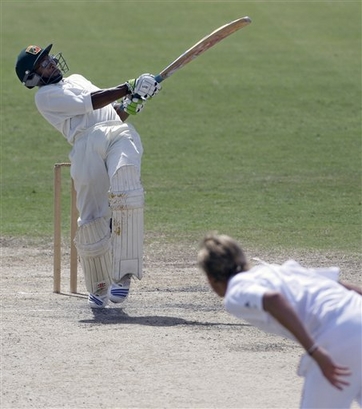 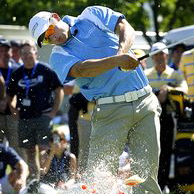 Sam Byrd
In the next frame his right heels does come off the ground. 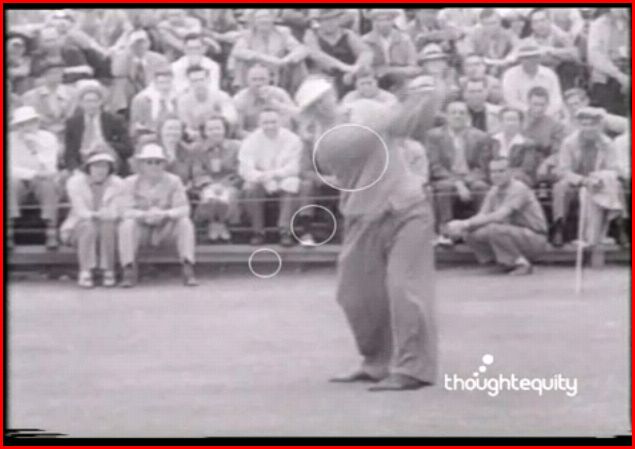 Thanks for framing that Macs… awesome 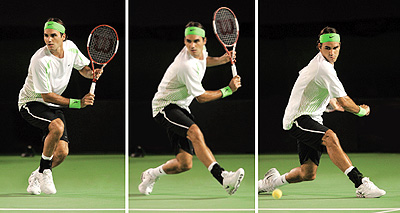 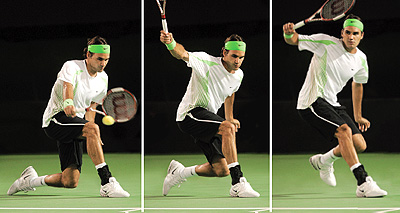 man…you’ve got a real treasure trove of this stuff…