[youtube]Use the Right Leg, not the Left to Compress the Golf Ball - YouTube

I shot this video today to demonstrate the role of the right leg in loading pressure and it’s role in pushing weight from right foot toward the target through the strike of the shot.

The idea that weight should immediately be planted into the left leg at transition as some instruction indicates is not an optimal action. The notion that the swing is governed by a powering from the ground up that starts with planting the left foot then straightening the left leg is false.

In this clip hitting a persimmon driver off the ground, my left foot does not even contact the ground until PV5 or right near finish of the swing. This ball was absolutely nailed hard. The ground up pressure comes primarily from the right leg, ankle, foot and knee.

I shot this still wearing a street shoe and you can see the right foot almost slip out on me due the forces exerted there. Next time I will lace up a proper shoe with steel spikes and really get on it.

Been following the thread over there and glad you’re weighing in (no pun intended). Always best to have real-world, practical evidence to counter armchair scientists, though I respect D and encouraged that he will soon post his swing to make his argument. The left knee staying flexed to P4 and then pulled into a straightening mode by an accelerating torso is good stuff.

Wow impressive! I bet that took a little practice to stay in balance with one leg!

Master that move to use on the first tee at Mare with students!

That’s one awesome visual John. Thanks

Impressive… reminds me of the baseball drill to hit golf balls … load the right side only!!!

I will be surprised if D posts his swing over there.

As I said over there remarkable. It has made me realize I get over on the left too soon.

Is this a new module?

The purpose of the left leg is to aid in keeping us in balance, help us stabilize our lowpoint, and by utilizing Module 2, the left leg can aid in weight transfer with a cumulative push - pull effect.

"[i]The legs do supply power to the golf swing. More the right leg than the left. It’s the responsibility of the right leg to transfer weight from the right foot to the left. While the left leg aids in balance and support, it is not the driving force.

Given the same relative pass through point at P3, a more vicious torso rotation will show the torso, hips and shoulders more open at impact. Just more pressure creating arm and club lag. Good stuff for sure… but this is only GOOD if the club has been slotted and is feeding out of the right hip pocket as Knudson described. It’s not good if the shaft is steep coming down and the lie angles are more upright than flat. [/i]"

Put a leg on the ground and suddenly it doesn’t look so unusual.

The idea that weight should immediately be planted into the left leg at transition as some instruction indicates is not an optimal action. The notion that the swing is governed by a powering from the ground up that starts with planting the left foot then straightening the left leg is false.

But for a swinger and pro slinger it is gold… He has to bring the weight and the hips to the correct impact location early, so he can brake the pivot! That is why they look to the eye somehow apealing - open hips, weight left early - but in slow motion you would detect the stall just prior to impact and the resulting slinging of the arms… Of course no pivot acceleration post impact left.

Pivot Stalling – is when the downswing pivot stops. If the body stops (for whatever reason) on the way to the body’s correct impact location, the pivot is said to have stalled early (prematurely).

What is left - Pivot Acceleration… Hard work… and for sure your pivot is influenced by leg loading and weight transfer.
[youtube]http://www.youtube.com/watch?v=wmGDUzxSanw[/youtube]

Love the new finish! Can you film that dtl and face on?

The big problem is where is the weight???

In relation to my ballposition I am on top and left… 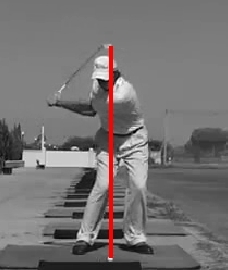 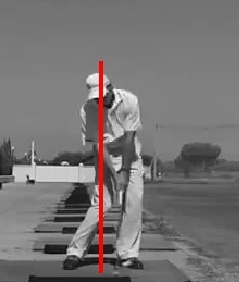 In relation to my lowpoint Iam behind and right… 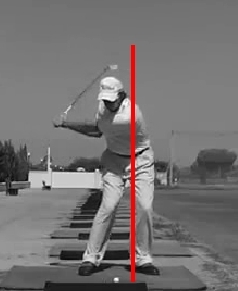 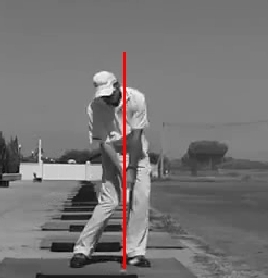 Love the new finish! Can you film that dtl and face on?

That is off topic, but who cares…

Actually it is more a vapor trail how I transfer the energy to the ball and beyound!

In my 3/4er swings it does not happen but I use the same motion: 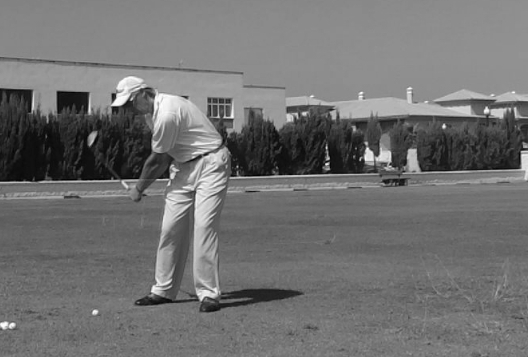 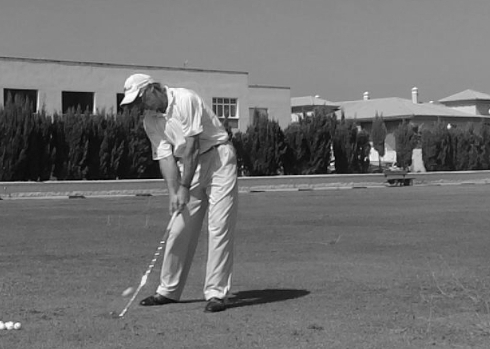 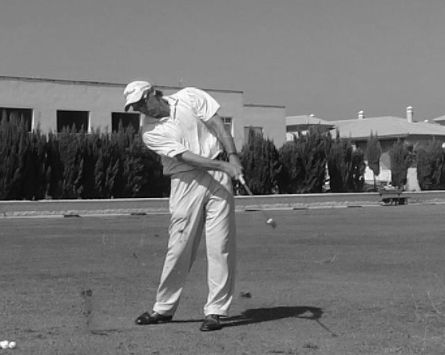 Ball position can really be an optical illusion when viewing it it 2D, video or still capture.

If you slotted deeper and worked the ball 15 degrees right of where it appears you are lined up… you would be moving your relative ball position forward. People coming OTT are moving their relative ball position backward. For this reason it’s not as important where we are set up as most think. Then if you take into consideration one’s ability to work the ball right or left in the air, that confuses things even more to the causal observer.

For instance… I could set up to a shot… know that I am way right of the pin and decide during my backswing that I am going to draw the ball left of the target into the fat of the green left of the hole.

When looking at Trevino, it looks like he had the ball very back in his stance… but actually it was positioned correctly relative to his initial flight plan.

Obviously Trevino is not playing this shot just off his right foot… although it appears that would be the case to the casual observer.

Back to right leg protocol for a moment, I am a bit confused. If we are to be “pushing off” with the right leg then wouldn’t the horizontal ground force that this excerpts be outwards which is juxtaposed to my current module 2 work?

It seems to me that the initial movement left is more of a lean than a “push”. The lunge you make in the video doesn’t come until P3 which is where the mod 2 protocol would kick in presumably?

Another observation is that while in the video you are lunging forwards there is limited pivot. Are these 2 points connected? While your left foot doesn’t hit the ground until after P4, your weight is left at impact. I know that this isn’t entirely the point that you are making but it is that not the same as trying to get ones weight left to start the downswing?

Just to say, I’m loving the mod 2 work and now this has thrown a cyber spanner in the works!

It’s a good question and one I was suspecting would surface… good insight.

You are exactly correct. It is a fall left… but that fall is not immediate…it’s a fall down also. We go downward into the right foot then the push with the right foot to move mass left is also a pull left with the left foot as in Module #2. You push and pull at the same time… just as you push and pull with the shoulders. Left shoulder pulls because it is ahead of the ball… right shoulder pushes because it is behind the ball. So same thing with the feet.

The purpose of the video is not to negate the importance of the left foot… it is to downplay the quick move to the left foot that has been all the craze since S @ T. Sideways and tears.

Still frames are very deceptive. If you look at many of the great strikers… it appears that their weight is left if you are thinking of a static capture or picture. Certainly if you look at the picture of me just before impact with my left foot off the ground… it sure looks like weight is left… and I would agree that mass is left… but there is obviously no pressure in my left foot or into the ground because my foot is off the ground. In this case… my right foot is taking on extra work… it’s pushing… it’s straightening… and you are correct… that the Module #2 is not fully engaged because module 2 requires that both feet be on the ground to create opposing forces which directs energy toward our chi or core. So the real result is that we can increase rotational speed by using true leverage.