[b]I bought some of these—I know—I said I was done—and I am—and I MEAN IT THIS TIME!!

pics when I get 'em—

another 35 dollars down the drain!!

just think- that $35 could have bought you a ferrule and a grip on a new titanium monster!

[b]I bought some of these—I know—I said I was done—and I am—and I MEAN IT THIS TIME!!

pics when I get 'em—

another 35 dollars down the drain!!

Looking forward to seeing the pics!

Not $35 down the drain. Ya gotta have quality backups on hand.

picked up these gems last week…

no cracks, heads and inserts are great… these will be next on the refinishing table.

[b]Another small sampling----
2M turned me on to these—

I know nothing about them, but if anyone knows a history-send it in please !
Spalding Driver 3-4 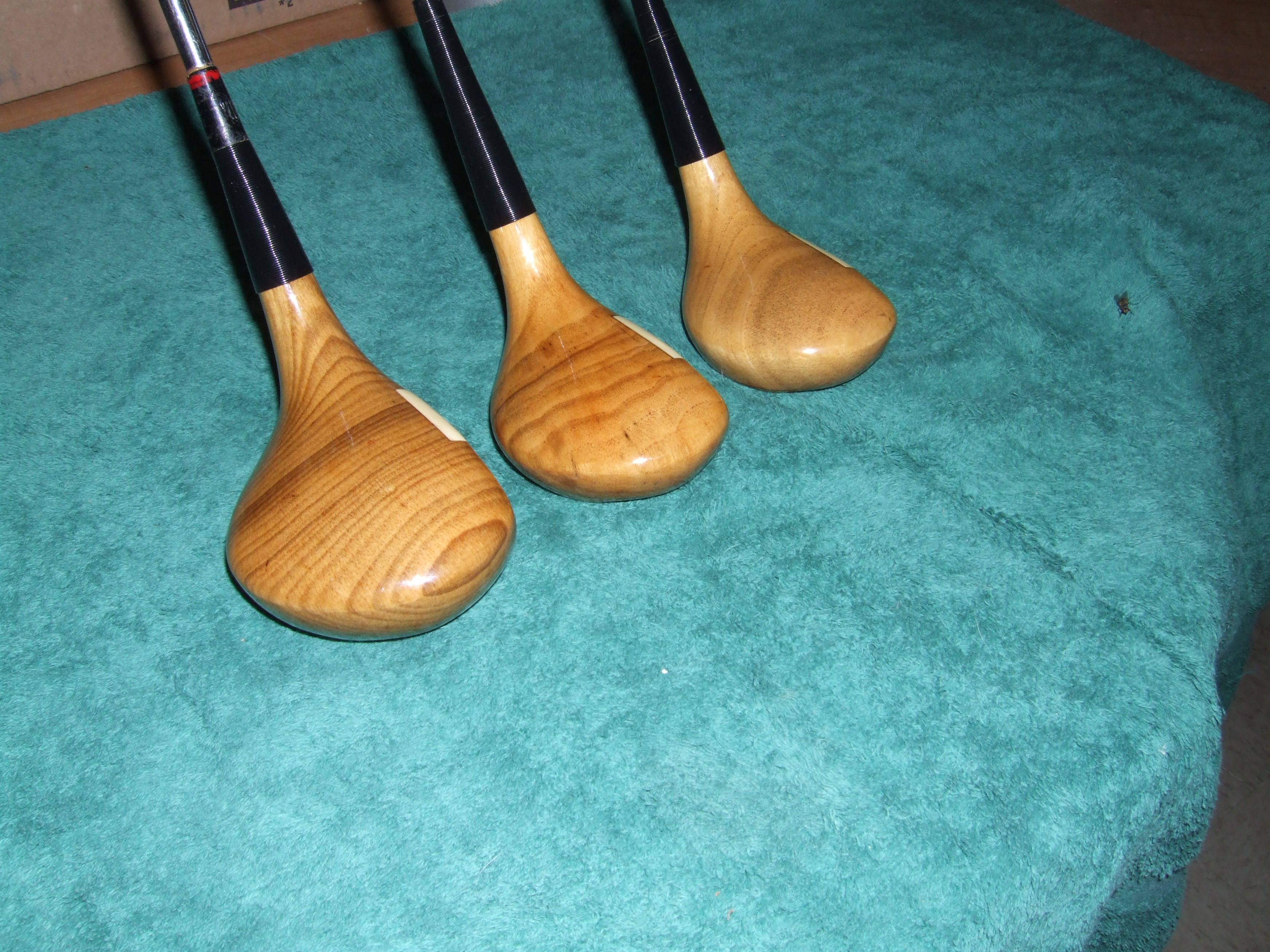 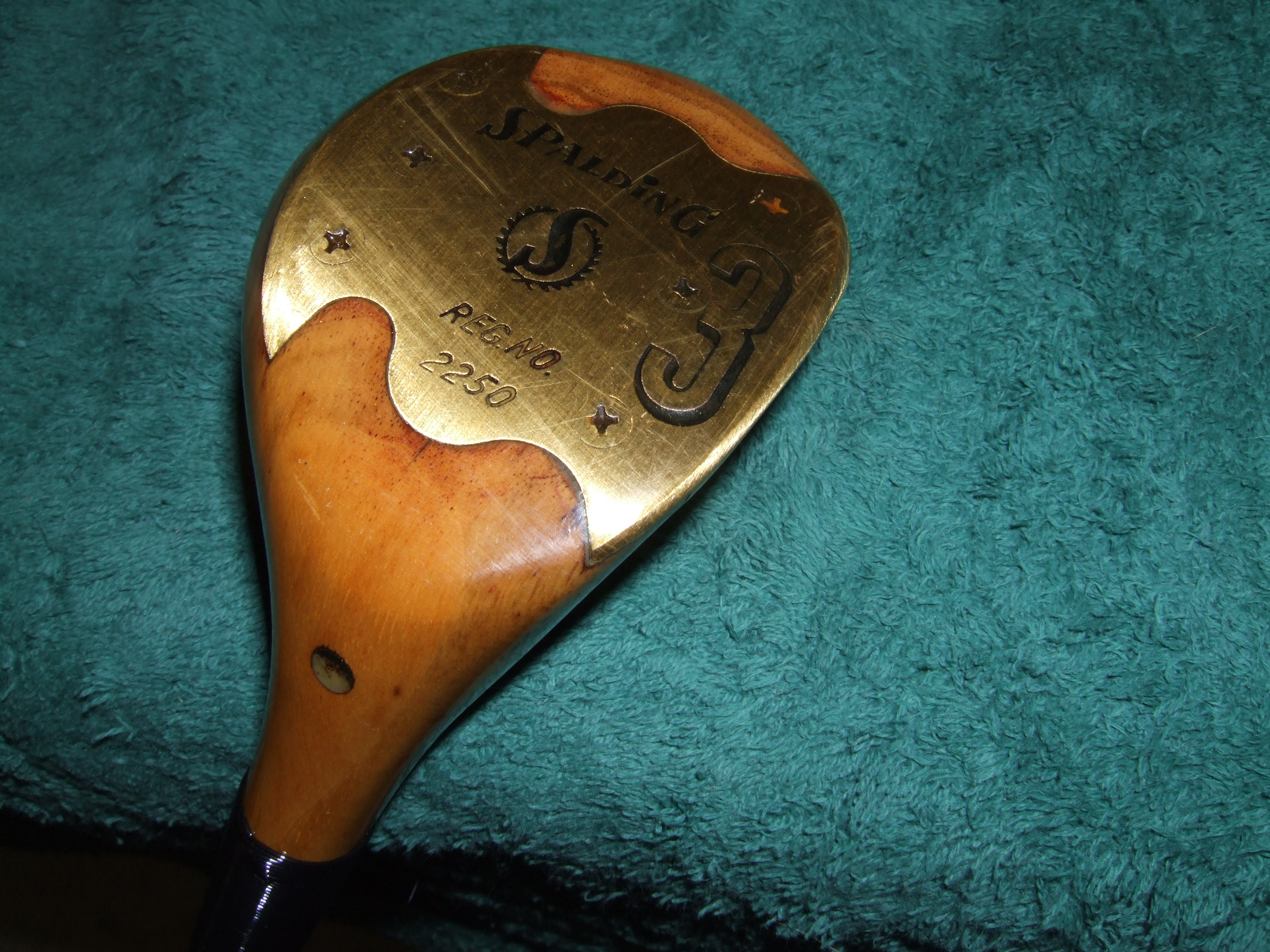 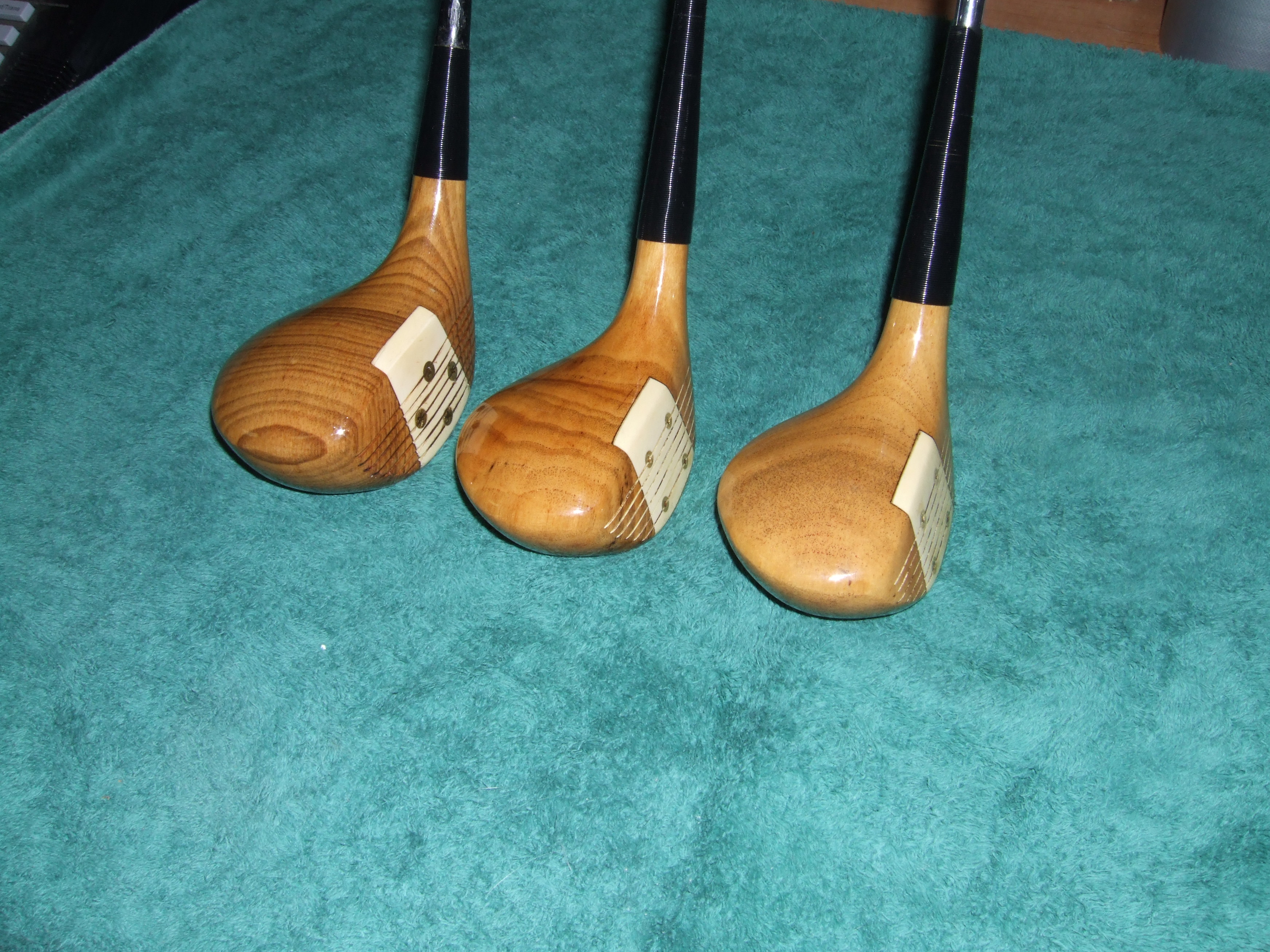 Nice- I really liked the look of the grain working it’s way from the face/inlay backwards to the rear. I always have been a grain watcher on persimmons!! Don’t know why but that looks good to me- sort of like an alignment tool also. Never liked the grains that criss crossed at diagonal angles as much
I remember having some of those woods years ago when I was given stuff by Spalding. I liked them - that’s why I pointed them out. I think you’ll like them too Bent

Nice one Bentshaft - Let us know how they play!

Two - I know very little about grain patterns. I hear people say from time to time that there is a preferred grain pattern with the concentric U grain in the toe but its all a mystery to me. Anything you can share or is just a beauty in the eye of the beholder type thing?

Arnie,
I don’t know much technically about if the grains help with the endurance or performance of the club.
I was just going by my personal preference like you suggested.
If you look at the 3 woods that bent just got.

The left one has a strong grain pattern. You can really see the pattern running through the club- even forming circles on the toe and running up the neck area
The middle one has a distinct grain running through the center and only very light grains towards the heel/neck and toe area
The right has only minimal grain.
I like the one on the left- It has the grain running strongly through the club which I would use to help me with alignment purposes. More importantly–It shows power to me- It screams out-- ‘’'I am full of grain and am aged and am strong and will not be broken or destroyed"— Doesn’t that sound weird? But that’s my line of thinking on them

Funny- because when I was younger and could remember how to cut back-re-stain-re-lacquer and re-shaft these pieces of art I used to try and finish all my woods in this same light color.
In fact many of them I wouldn’t even stain (I am betting that’s what happened with these ones)…I would just cut them back nice and smooth them up and put lacquer on them and let the natural color of the wood be the focus- and that really makes the grain visible by just using lacquer and not staining them.
The beauty of the old woods- you could call them art because as you can see no two entirely looked the same exact because of the wood they used or the color they used to stain or the different color inlays used or screws used-= beautiful stuff 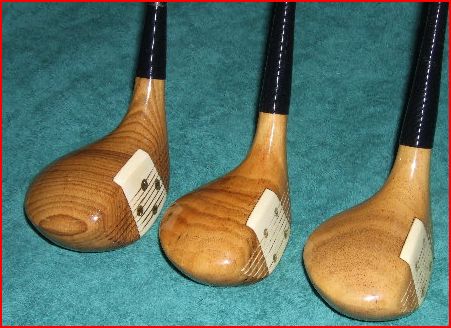 Got myself a 3 and 4 wood today from one of the shops at Bundall. Conditions are not the best but I thought I might give them a try and perhaps spend a bit of time trying to restore them to the best of my ability. Spent AUD 25 for both so it’s not like I splashed out anyway… 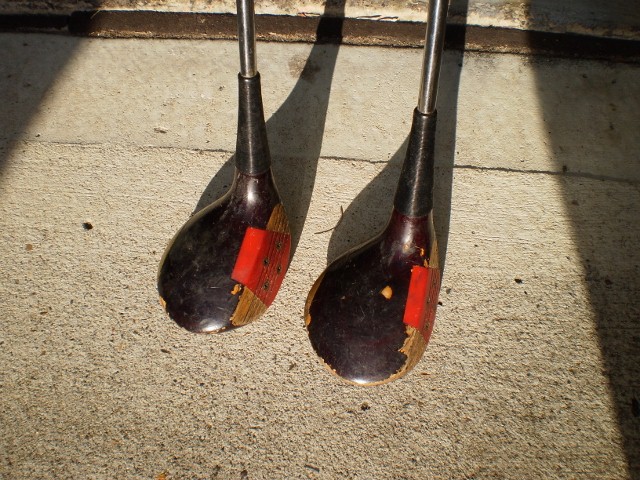 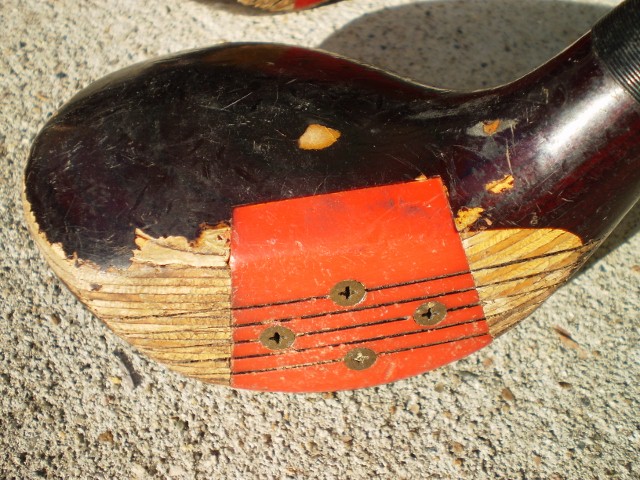 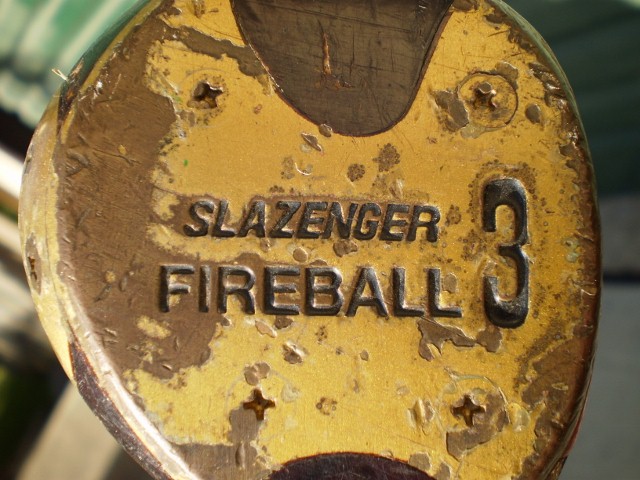 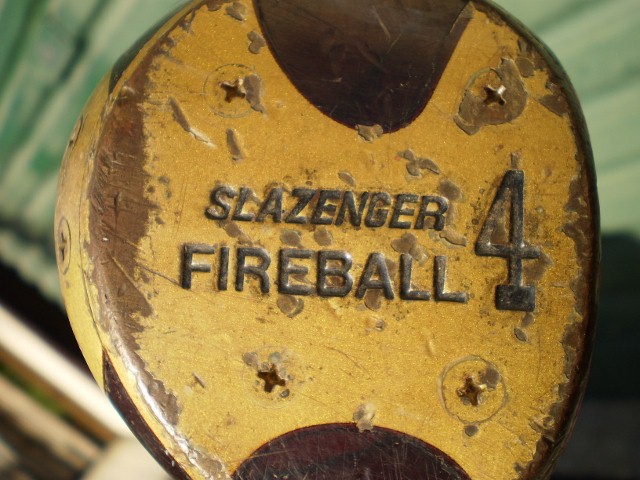 I’ve been trying to get a nice set of Hogan Woods to go with my beloved Hogan PC blades.

I remember last year at our club league wind up, we had ‘old school’ day and many were finding the old stuff impossible to hit… I loved the blades, but had been using them, but I was forced to borrow a set of old Northwestern woods from my brother-in-law. They were really beat, and the ‘grips’ were ‘illegal’ because they were game improvement grips (that still cracks me up).

This ain’t an Ebay find, but maybe even better. I’ve been looking for a set of Dynapower Turfriders vintage 1962, and have had no joy at the Bay. There’s a golf repair/resale shop that’s been around for an eon or two. I haven’t been there in a long while, and when I was in the general vicinity had a wild hair, and thought might as well look.

I looked through all the used sets – a lot on consignment and came up old bladeless. I finally asked him if he had any, and he laughed and said there was no point in taking any in because there was nobody to buy them. I then inquired if he had any in his dungeon he had forgotten about. Long story happy and short – in a dark corner next to the thumb screw set up – 2 through PW Turfriders ala 1962, aside for the cobwebs in pretty good shape. He gouged me almost as much as you’d pay for a dozen discount Pro V’s. Friend is going to flatten and stiff shaft them. When I get them back I’ll send in the visuals.

flop
Have you ever hit Dynas before?
I love all my old stuff but the Dynas (mine are 1965) are easily my favorite clubs!
Enjoy my brother—just an awesome feel those things are!

Hey Pippolo
I want to see the “after” pics as well—fun project!

Played them today in the mud. When Lag’s mandates are applied the feel is awesome. Can’t wait to get the new shafts and flattening done. The good old heavy feel makes the light things I’ve been hitting feel like plastic toys. Having a higher number to go the same distance is fine by me. I’ll trade look how far for look how close any day.

Oops! By higher I meant more club, should have said lower. The other thing that occurred to me is that my old swing was very vertical, and I had to go to graphite because my wrists have taken a lot of beating over the years. The old pork chop divots were taking too big a toll. Now with the flatter - just take a strip of bacon swing - steel shafts are again my friends. Another cool development from using Lag’s system.

Hey Pippolo
I want to see the “after” pics as well—fun project!

Now, does anyone have a good book on restoration of old clubs…

[b]This is my last iron set for awhile!! I got my Hagens, I got my Dynas, but if you want some old clubs, how the hell can you not have some Hogans?!?!

1967 Percussions
2-E (that E wedge is sweet)
Havent hit them too much as my love affair with the Dynas continues…
GREAT shape—good grooves—they may have touched up the paintfill
They came with brand new Lamkin Crosslines—didnt look they have ever been used, but I will probably have my guy blow them off
and add 2 wraps and put them back on…
At 3 bucks a grip, that’s 27 dollars right there… 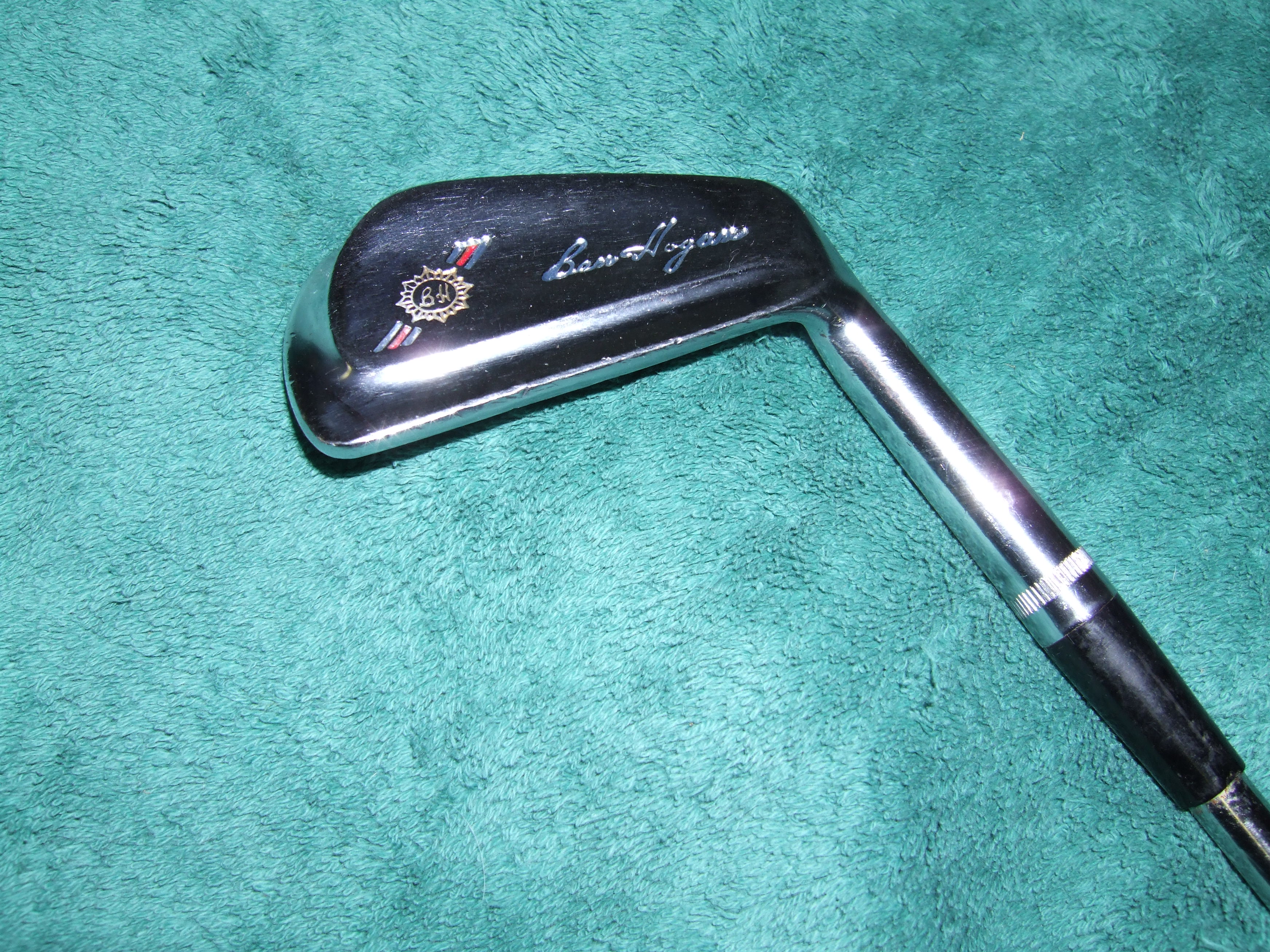 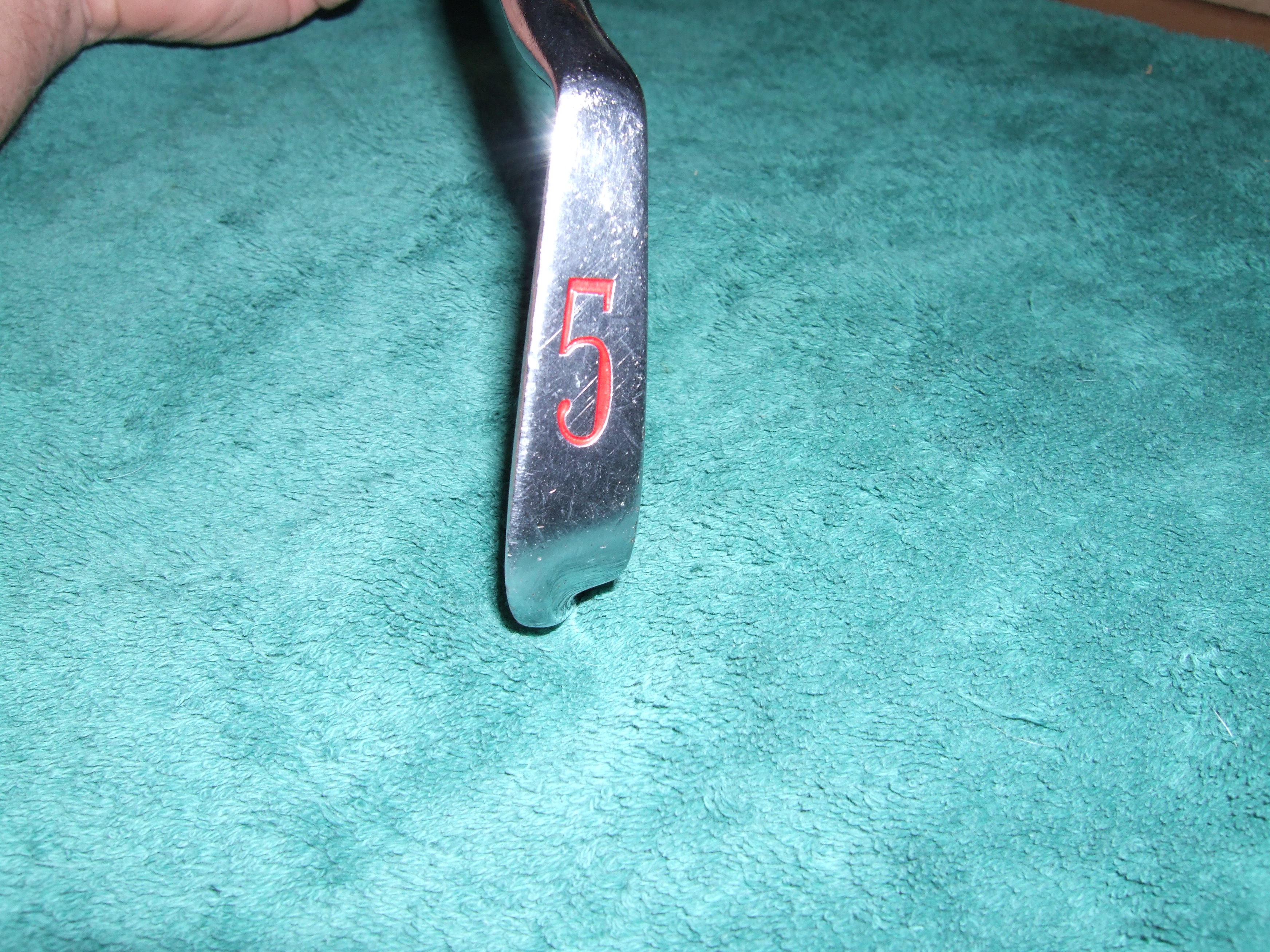 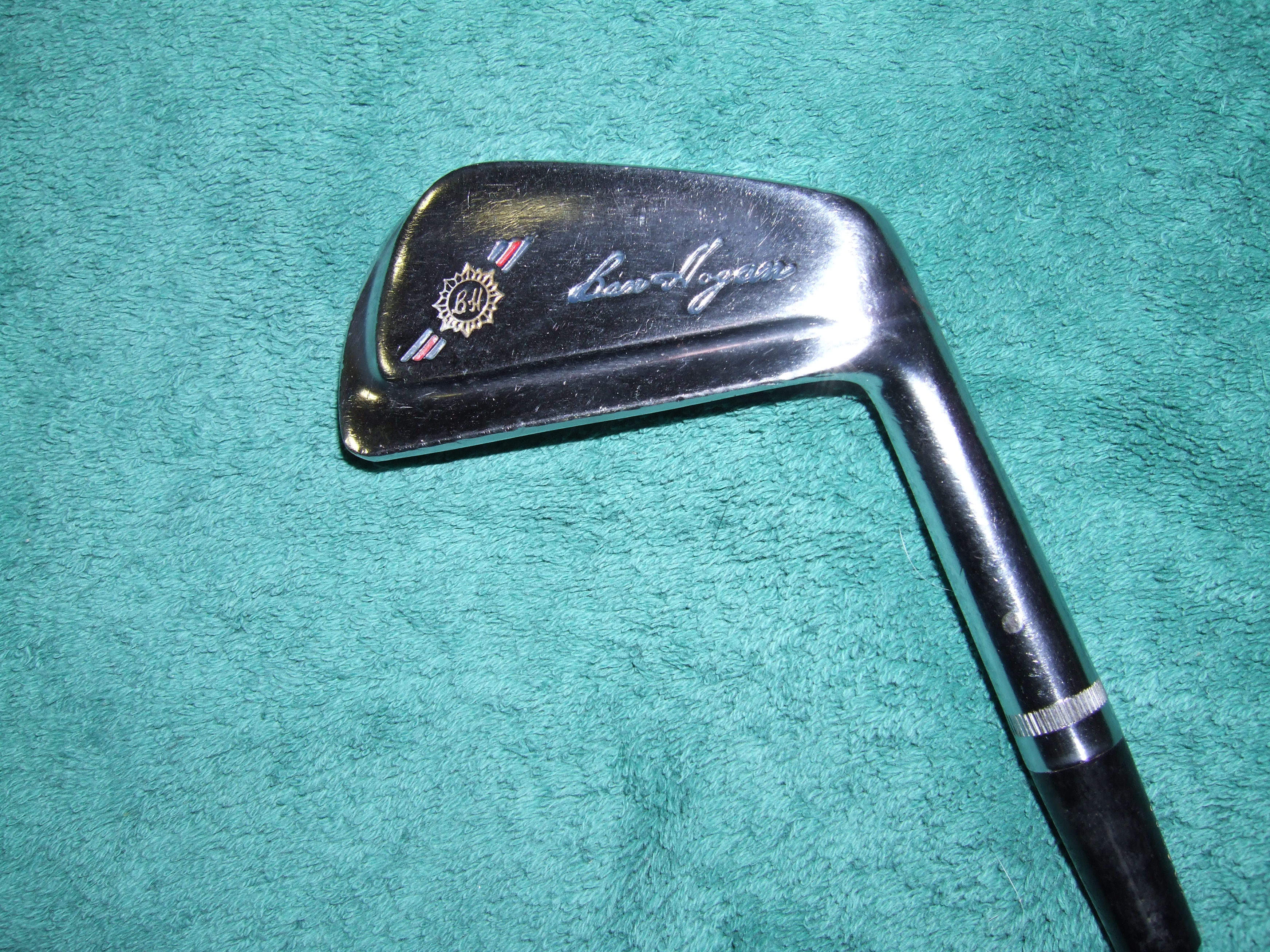 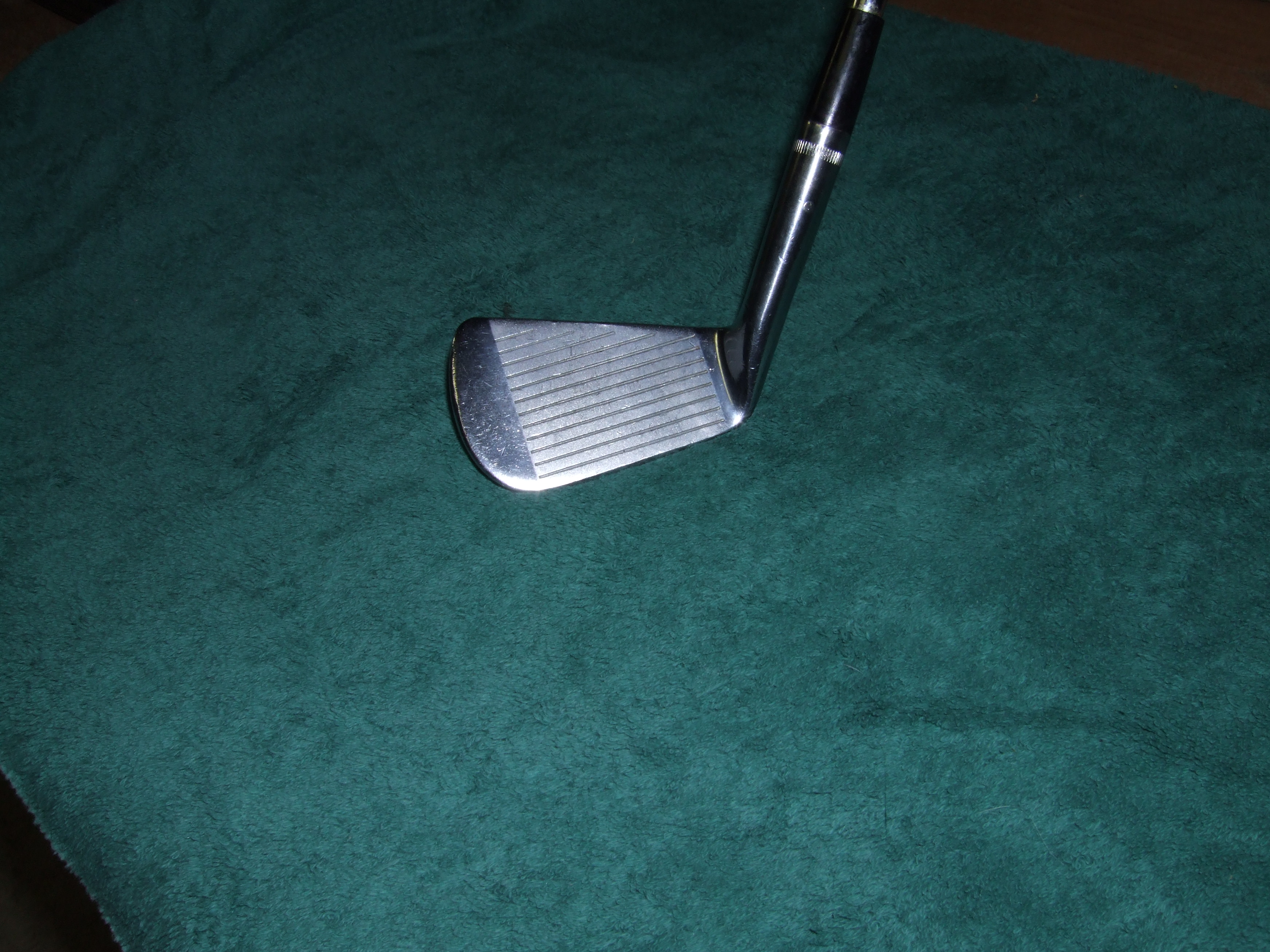 I’ve been trying to get a nice set of Hogan Woods to go with my beloved Hogan PC blades.

Prot,
I have some 1967 Hogan Personal Speed Slot 1,3,4,5 woods that came with my '63 Hogan IPT irons. They are in great shape. Let me know if you have any interest in them. I seem to prefer the MG Tourney woods.

There’s “clean”, and then there’s “clean”! Perhaps the most “no frills” look I’ve ever seen in an iron design. 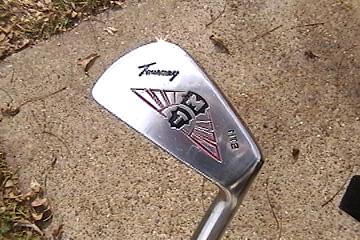 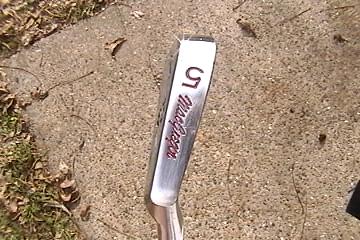 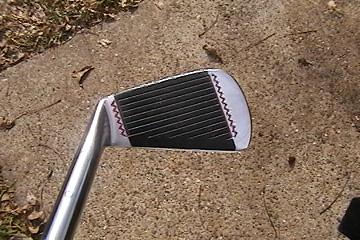 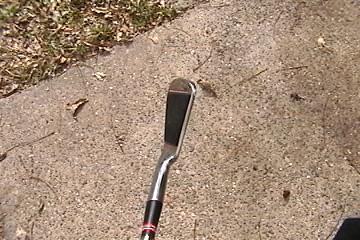