During our band rehearsal the other day for an upcoming Halloween gig…I had a cool experience.

Our guitar players don’t like drummers stepping on, or playing over, their solo leads. During one of those solo leads I just sat back and was playing some basic patterns between the ride cymbal and snare waiting for the transition. It was a longer than usual solo for him which pisses me off sometimes…like he thinks I have nothing better to do with my time other than to watch him get his ya ya’s off. Anyway, I’m glad he took longer this time.

I started to drift away during his solo and the first thing that caught my attention was my snare- which is 10 lug. As I was looking at it, it reminded my of the Sunburst logo- which is only an 8 pointer- but it was pretty similar. Next I saw how my R hand and stick were attacking the snare head. The drumstick is attacking from a 4:30 relationship to the circular snare head. I was having a good time with this. Next I saw my feet position. My right foot is perpendicular and my L foot on the hats is about 22* angled in relationship to the right foot. Needless to say, I was becoming engrossed with these and many other, observations while guitar george was doing his thing…to the point that I missed my mark on the transitional return. They looked at me as if to say “are you still with us?”

When we finished the song they asked what happened. I told them I was somewhere in Texas…but they had no idea what that meant.

Great stuff, RR… it’s funny, as I was reading this I was thinking to myself, ‘there is just no way he was ready to come back in when it was time’… sure enough, you didn’t let me down! Sounds like you were in a better place anyway…
Cheers…

We gotta be the only forum in the univese with a Renaissance Rat.

Try Skynard’s That Smell and Golden Earring’s Twighlight Zone or the Zombies’ She’s Not There. The rats hair will be on fire for sure…what’s left of it!

Took this drum stuff a little deeper into the abyss today but came out not smelling like whiskey bottles and brand new cars!

It occurred to me that from an aerial view there is a 45* (4:30) relationship between the top-center of a kick drum ( point 1) and the middle of the batter head of a floor tom (point 2) located to the right side of the kit. So from address, I rolled open the blade to expose the serial numbers to the target line and from the top my intention was to come right through the middle of that floor tom’s shell with the club. To make it a little easier…for those who know how kits are set up…I imagined the floor toms badge to be on that line at it’s inner most location (point 2). Or in other words…the badge was at 4:30 on the drums shell.

I even adjusted the posture a little bit. It felt like I was partially sitting on a drum throne.

My wrists were even different…both set down a little bit. It felt like I would be able to attack a snare drum with a matched grip. Imagine you are sitting on a throne with the snare drum at addomen level. Now if the throne’s height does not change but the snare drum is lowered to the floor…in order to catch the tip of the stick and butt end of the stick on the rim at the same time…the wrists will have to be set down. Like sealing the wrists.

Really like this image as it’s something I’m familiar with and can sense where and what the club is doing in relationship to my imaginary kit…since I sometimes play drums with my eyes closed anyway. Made it real easy.

It even did wonders for alignment. More on that later. Might have to give Guitar George a pat on the back next time I see him…and for unknowingly getting me on this path.

All you drummers out there…forget going through the floor tom…once loaded and fully rolled at the top, drop that pupply to attack from underneath the ride cymbal! Almost forgot…the ball is on the heel portion of the bass drum pedal

Not sure how many stick men out there besides Lag…but played around with something really cool and powerful in terms of intentions and imagery. This actually came to me a few days ago and put through its paces this morning.

Once dropped on top of 4:30…my sole intention was to hit a rim shot. A rim shot, for those that don’t know, is when the stick handle area, and stick tip area contact a surface at the same moment: an area near the handle on the drum’s rim, and the stick head on the drum head itself. The contact happens at the same time…but there is also a very late hitting action with the lead hand in the process that still saves R wrist bend.

Anyway…I was imagining a marching bass drum…which are very large…resting on the ground almost on a line parallel to 4:30 but left of the left foot, and behind left a little. May have to do some art work to show this.

Once dropped to what I call, a loaded 4:30 line, my only intention was to turn hard level left to hit that rim shot- knowing the handle of the club will have to stay close to me and move left, so that the rim shot can be executed correctly. Hard to describe…but really a cool intention for me…perhaps my best one yet!

Range Rat, your description of the imaginary bass drum position is understood. I used to play the drums years ago. With this rim shot into the bass intention, does it seem to you that you have to hold shaft flex way past the impact? In order to execute the rim shot? Or the head would get there first? Great imagery idea. Thanks.

Hmmm, I play drums on a digital keyboard. I better hide.

does it seem to you that you have to hold shaft flex way past the impact? In order to execute the rim shot? Or the head would get there first?

Right on…yeah, way past. What I really like about it is that the handle of the club has to get real close to you while going hard left with the turn in order to execute the rim shot. Pretty nice feeling and visual for me. All I’m seeing are two lines: the 4:30 line to load on top of…and the leading edge line of the bass hoop- right through the middle of the drum…whereas those two lines are for all practical purposes parallel…like a parallelogram.

Glad to hear there are other thumpers out there…digital or otherwise.

Texas Radio and the big beat sounds pretty good to me lately!

Sorry to say I need a visual crutch to help my crippled imagination creep further down rim shot nirvana road.

So, when you have time, it will be good to see your 4:30 marching band base drum rim shot artwork.
Thanks.

With or without lugs?

Ok Teebox…no problem…give me a little time to fire up the Paint program. 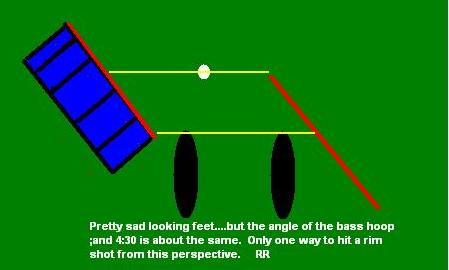 That was quick RR.

OK, that’s a bit different than I first imagined. Glad I asked. Nice work. Thanks for the cheese.

I thought you meant this… 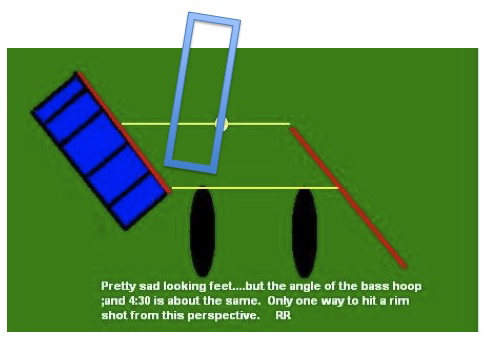 No…my intention was way ahead of the ball…which everything is nowadays. But I think your drawing fits within my intention Bom…but to me I feel your drums position as a pass through position when rotating the forearms and going hard left…while saving R wrist bend.

I suppose an old tractor tire could be used as well with the same positioning.

Hard with this Paint program for me to get the perspective correct…but something like this: 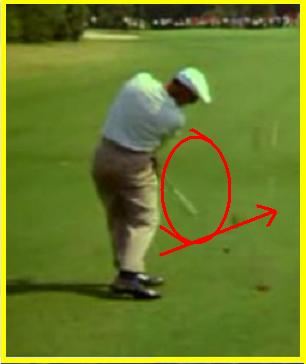 Gotta go left and level real hard to rim it.

Range Rat’s drawing was pretty close to what I thought. I imagined the drum a little more left and behind the left foot from his previous post. Just a fantastic intention (rim shot onto the drum). Thanks again.

No…my intention was way ahead of the ball…which everything is nowadays. But I think your drawing fits within my intention Bom…but to me I feel your drums position as a pass through position when rotating the forearms and going hard left…while saving R wrist bend.

I suppose an old tractor tire could be used as well with the same positioning.

Yeah I can see how it would be on the journey, alright. Cool…

I also like how the sound of a well struck shot compares to a rimshot.

P.S.
I think you have enough ‘Paint reps’ under your belt, so it’s time to graduate you to a more advanced program.
It’s free, easy to use and you can create better artwork with it

Will you take the red pill?