Hard to imagine a more “textbook” action working the golf club through the strike. P3, P4, PV5 spot on as far as capture frame positions created by Trevino’s internal dynamics.

Sometimes I think it’s interesting to view the swings of the greats as they get older, because while Lee is certainly still very strong here in is 70’s, he is probably having to rely more upon technique than the athleticism he exhibited 40 years before. I think the same about Hogan also. I feel Hogan’s swing was best refined later in his career.

So many key points here in Trevino’s swing. First how open his clubface is at P3. The shaft very deeply slotted on the 4:30 line. Notice how level the shoulders rotate, and how his hips move in every frame while keeping good earth connection in his right foot. The club works left here better than when he was younger because he had to level out his rotation as he got older due to lower back problems created by the dipping right shoulder . Had he swung like this way when he was younger, he may have hit the ball longer.

It’s fascinating to see how Lee gets the shaft slotted and working behind him. Very unique obviously and it’s really for this
exact reason why I don’t spend a lot of time preaching backswing swing plane or that a perfect set up is somehow going to get a golfer to arrive at a world class transition.

Trevino breaks all conventional rules here, yet if you follow the path of the clubhead, there is a beauty and logic to how it works into a flow from a deliberate manipulation of the hands. Furyk takes a very similar route, just more upright before it slots. Hubert Green took a similar path back also, but from the hands not working so far out and away from his body.

Its amazing how well he still swings it. Ive spent alot of time looking at his swing. My friend gave me some footage of him hitting balls back in the 80s from all different angles and he was talking though the whole thing, and two main things i remember from it is that he talked about how his leftside never slows down through the shot, and it actually speeds up through impact and he thought that’s one of the reasons he was so accurate. And he also mentioned that he could bring the club from his finish position back to the ball and the face would still be square and not rolled over and he said that he didnt think many players could do that.

In that video he doesn’t appear to be hitting the ball out to the right anywhere as much as you would expect and the ball position looks more to the left. Any thoughts on why that may be?

For one, we don’t know exactly where he is aiming or what his shot shape intent was… and the position of the camera would affect where we see the ball taking off. The further the camera is positioned to the right of where it is now… the farther right the ball would appear to take off from. How far the camera is from the ball and the type of lens also have an affect.

I would speculate that with a more level shoulder rotation, he may not be aiming as far left as he used to.

It would be great to see that footage that your friend gave you if possible. That sounds interesting. I agree with you too Lag about swings as they get older. I think that when you start taking some of the speed out of them you can see their intentions more clearly. We should be trying to find out as much as possible about Trevino while he is still around. He really doesn’t have that much stuff out there compared to say Nicklaus or Player and yet he was a more consistent striker than anyone.

Back in the early 1990’s I was able to watch Trevino play quite a bit at the Transamerica Senior Tour Event In Napa(Silverado).
He absolutely had control of his golf ball. Pretty amazing. The guy just hit bullets all day. I expected to see him hit all fades and he really worked the ball around in all directions.

I’ve read power golf, 5 fundamentals and knudson’s natural golf. can someone recommend a must read from trevino?

“Groove Your Golf Swing My Way” by Lee Trevino. Unfortunately it’s a somewhat rare out of print first edition. The current price for a used copy on Amazon is approaching $200.00. A better option might be to check out some old time used bookstores (if you live near a metro area) and see if you can get lucky.

While we’re on Trevino, I’m hoping Lag, Two or someone from the community can help me reconcile some observations I can’t wrap my head around regarding the proper use of forearm rotation.

In the first picture of Trevino, Lag mentions that the clubface is open at P3. But to me, the toe appears to be standing straight up which (when I try and replicate that position) is as closed as it can possibly be when I’m at P3. To me, an “open” club face is when you could place a shotglass on the clubface and serve that glass right to the ball. At the top, this creates that Hogan “cup” in my wrist.

When Trevino is at the top, he seems to be doing the Show God the Time Move, what to me appears to be a bowed left wrist. To accomplish this, for me, I have to reverse the Hogan advice to fan the blade open and instead torque the club in the opposite direction and just hold that move back to the ball. Hit the ball with the back of the left hand (for RH golfers).

Since Mod 1 I’ve been working on fanning the blade open on the backswing, and rolling it back closed on the downswing (the rolling back starts right at transition) without letting the toe roll over for as long as possible after impact. Should I be rolling it closed on the way back, Show God the Time and hold that back to the ball??

To make matters worse, as a chronic over-analyzer I’m trying to sift through Martin Ayers’ “twirl”, Brian Manzella’s “twistaway”, Martin Hall’s “rolling the knuckles down” and the ABS explanations of “torque” in order to better to understand all this, and the different explanations literally all lead to different places.

I thought this was Mod 1 stuff I had down in the first week, but then I read Hogan and he said to do the exact opposite of what you think you should be doing in order to do it right!

IMO you are spot on with your observation about the clubface at the start of the gif. It is perfectly square to the plane and stays there into impact. The simple answer is that it’s not ABS standard protocol. Because his L hand grip is so strong to start…he does roll his L forearm going back but it only gets the club near square…not wide open as w/ a Hogan L hand grip. ABS release is max clockwise rotation into impact then none post-impact. Trevino is more right hand under the left (note still not the right hand rolling over the left like Couples or Singh). Because he isn’t rolling the forearms into impact he has to use a massive lower body effort and pivot to get left (along w/ open stance and ball back).

Not every piece of every great player is ABS. Trevino is also also steep shoulders and digs beaver pelt divots.

USGA Films recently produced an excellent hour long film on Trevino winning at Merion in 1971. It was aired in the Golf Channel several times last week. This was well done, telling the story of Trevino’s rise from nothing, and the difficulty of the course. If it airs again I highly recommend it.
An interesting vignette is that Nicklaus’ words of encouragement to Trevino at Doral that year had a very positive effect.

[size=150]“Trevino was good. He was VERY good. And he was smart. You know I always believe that Trevino and Ben Hogan were the best two ball strikers I ever saw. And I think Trevino was a lot like Hogan in how he figured out a golf course and how to play it”.[/size]

Also from an article: 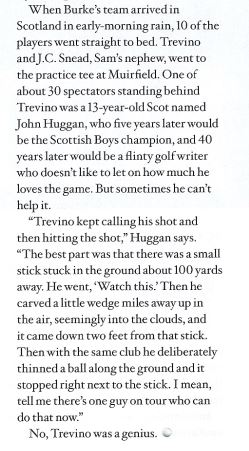 That was a great show on Trevino.
I loved how described winning in Tuscon…“I was hitting it so good, I wouldn’t even look at the ball after I hit it, just hand the club to my caddy and listen to the roar of the crowd”.

That’s the kind of thing we don’t see anymore. 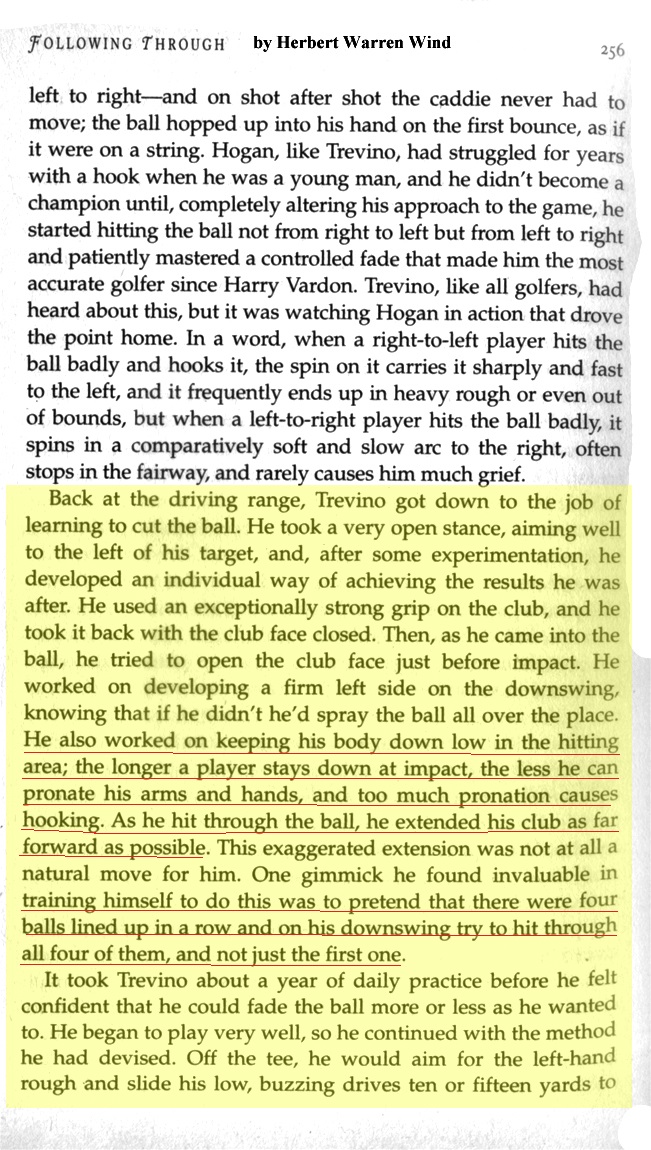 Some great Trevino mojo here. Embed was not working.