An ABS student sent me a video of Lynn Blake hitting an impact bag, and asked if this was him demonstrating
module #1.

This is dead hand…right arm throw… pivot stall stuff… not consistent with what great ball strikers do.

Great strikers have great post impact pivots… not just throwing the right arm at the ball… disconnecting the left arm from the body.

maybe if you are trying to hit a wedge out of 2ft rough. Yikes!

Why would Yoda be demonstrating ‘module 1’ in any case?

He has no idea what module 1 is, is unlikely to have ever visited this site and seeing as the video says “Copyright 2005” would have being demonstrating module 1(which he wasn’t doing) almost 4 years before anyone had heard of it!

Thats the video in its entirety.

I think taking a picture from it and using it out of context is unfair and misleading Lag.

I want to be clear that I think debate is useful and healthy and is where progress lies.

A constructive criticism of the clip in its entirety would be useful I am sure.

I’ve met Yoda a few times as I’ve worked with probably his main protege, Ted Fort, on the golf swing. Somebody who knows that asked me about the pic and what I thought. I think the pic is misleading, but I still think Lag’s point is in tact. I think in the video, Lynn is just telling the golfer about keeping the left wrist flat at impact and feel like it’s flat thru impact. He’s exagerrating the point and the #4 PP gets disconnected.

OTOH, Lynn does not personally use a pattern like John’s nor does he teach it. It’s pretty obvious looking at the videos. Yes, I know that Lynn can use a variety of different patterns and I have a boatload of respect for his teaching, but it’s not Lag’s pattern nor does he teach it. And that to me was the original point of Lag’s post.

I want to be clear that I think debate is useful and healthy and is where progress lies.

A constructive criticism of the clip in its entirety would be useful I am sure.

Lag wasn’t being critical of Lynn Blake’s teaching. An ABS student asked if that was what we should look like in Module #1. And the answer is “hell no”. From what lag is teaching and the motions of great ball strikers…I’ve never seen any pics of Hogan, Trevino, Knudson, etc. in that position…unless somebody has a pic of one of the masters hitting a punch cut.

who could possibly mistake the position Yoda is in to where module one asks you to be?

They should really take up fishing!

It would however be an awesome cover drive in cricket

I think the image of Lynn Blake is very useful for comparing TGM hitting and ABS hitting. Lynn stresses a lot the Flat Left Wrist at impact, and to demonstrate it he will exagerate the position such that the left arm disconnects. Nevertheless, Lynn’s demonstration does encourage a pivot stall, in my opinion. So there is a danger for some students of that method of forcing a flat left wrist without the pivot to sustain it, which can result in some pretty horrid shots. I don’t think Lynn actually hits the ball anywhere near that position - maybe in a chip shot, but not a full shot.

In ABS, I don’t think of a flat left wrist any more - if I achieve one, it will be through the physics of my swing and if I see that on a video of my swing I’ll know it’s a good sign that things are improving.

I can’t say the post sat too well with me either. But two’s cover drive cracked me up.

In ABS, I don’t think of a flat left wrist any more - if I achieve one, it will be through the physics of my swing and if I see that on a video of my swing I’ll know it’s a good sign that things are improving

This guy does not think about the FLW either. 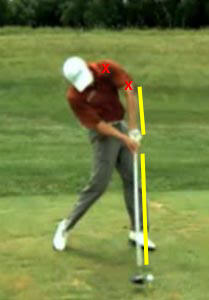 who could possibly mistake the position Yoda is in to where module one asks you to be?

They should really take up fishing!

I hate to say it because I would never want another ABS student to not feel totally free to ask any question, BUT… it sounds like a setup to me. Lag’s mod 1 video is much too clear to mistake the posted video as being similar to any module 1 activity if one is paying attention. I love it how most of Lag’s stuff stands on it’s own… I hate it when another instructor has to be used as an example.

Delete this if I’m OOB on this Lag,

The supplementary module 1 video makes it very clear, but I could imagine someone coming from LB’s camp being confused as to why something recommended there is no longer here. I think Lag’s post made that clear and had purpose–I just felt it sounded a bit disrespectful towards Lynn.

I’ve met Yoda a few times as I’ve worked with probably his main protege, Ted Fort, on the golf swing. Somebody who knows that asked me about the pic and what I thought.

Does this mean R3J asked the question. If yes then it makes sense because I believe R3J has not seen the module video.
At any rate I dont see any disrespect. Just highlighting the difference. Lag’s swing and his methodology was shredded apart at LBG “4 barrell hitting” thread with no ill feelings.

No way of knowing without asking Lynn what was in his mind when hitting the bag in the photo. BUT - the TGM concept of “blasting the arms off of the chest during release” is widely known and is in fact, a fatal swing flaw that Homer and most instructors, whether TGM or non-TGM, are not aware of . The arms come off of the chest in an effective golf swing only AFTER impact and only from momentum, NOT from an an active muscle-powered “swinging” or “hitting” motion of either arm.

Therefore, I have learned, that if one student could pose such a question, certainly there could be many others with the same question.

This is about clarifying that what Lynn is promoting and what we are doing here at ABS should not be confused in any way.

The photo I posted is for educational purposes, to show WHY I don’t agree with Lynn Blake. This has nothing to do with respect.

I certainly didn’t feel disrespected when someone posted my swing over on LB’s site which apparently was a hot topic for debate over there.

Any discussion about the golf swing is open to debate on these public forums… and we have had several of LBG’s students pop in over here from time to time to debate concepts and ideas. I always welcome them.

If anyone who had doubts about if Lynn hitting the bag and what we are doing here are similar concepts… and this is now cleared up… and… it is understood that this is NOT what we are doing… then this post has served it’s purpose.

This is great module 1 stuff…kindly posted by Twomasters in an earlier thread. 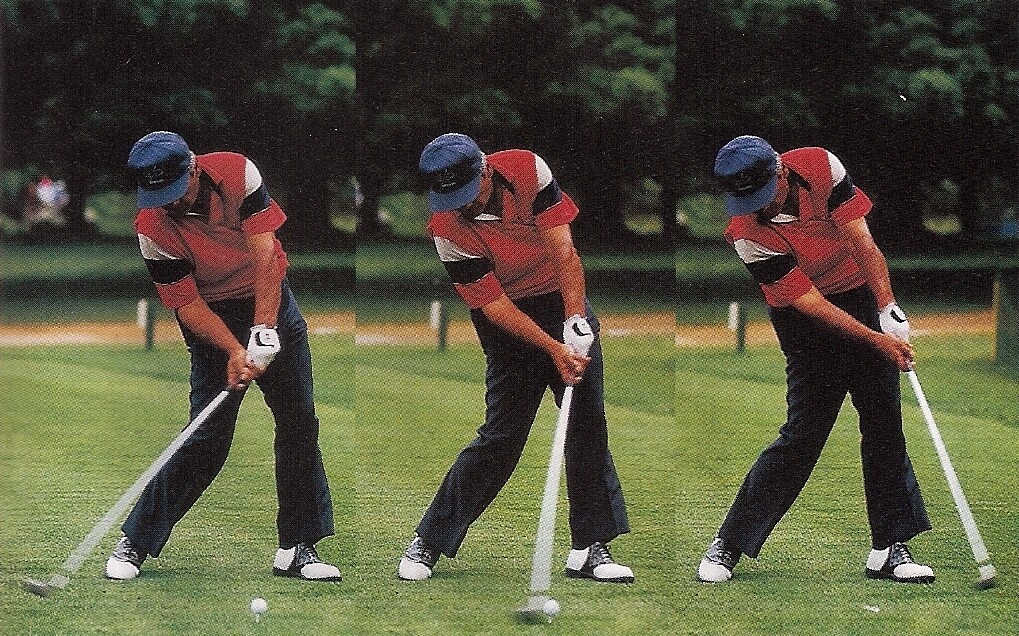 I think taking a picture from it and using it out of context is unfair and misleading Lag.

Lynn clearly posted his video on a very public site called YOUTUBE! So very fair game for debate there mate.

Nothing misleading here… in Lynn’s video, he DOES NOT mention the pivot… he DOES mention TGM 1,2, and 3 pressure points.
Obviously Lynn doesn’t think much about pressure point #4, which Homer called “The master accumulator”

Lynn in this video compares what he is doing to Hogan… now, do you really want to talk about misleading?

Hogan would NEVER disconnect the arms from the body like this…

Nothing misleading going on from this end.

Oh, by the way… module #1 has been in use by great players since before Walter Hagen. Like I have said a million times…
nothing new…!

Interesting you would choose that picture of Trevino…

If anyone would be disconnecting just past impact it would be Trevino, because he aimed his body 30 degrees left of the target, and literally pushed his shots out to right field. Trevino’s masterful technique still shows us proper connection of the pivot, arms, hands and club. Exactly what you should be doing.

Lynn is very clear that he believes you should de-loft the club, disconnect the arms from the body at impact and force a flat left wrist void of post impact pivot thrust, and drive the right arm which will inevitably lead to clubface alignment issues, just as Homer warned against.

Do this? bring lots of golf balls…

Lag’s mod 1 video is much too clear to mistake the posted video as being similar to any module 1 activity if one is paying attention. I hate it when another instructor has to be used as an example.

Robbo, not out of line at all…

These threads, and LTLGM’s have debated much hotter topics than this over the years!

Whether or not this was a set up… (I don’t think it was) I can assure you… of all the “first attempt” module #1 videos I view, in over 70% of them… the student is doing what Lynn is promoting here… it’s VERY common… and this MUST be addressed because… this is not what great ball strikers do… AND… I can speak from direct and personal knowledge, that this kind of methodology is going to make hitting a golf ball much more difficult than it needs to be… Lynn is driving that club so off plane it’s frightening.

As far as using Lynn Blake as an example… LYNN posted this on HIS public YOUTUBE, not me… so when you do that… you are opening up yourself as a topic for public debate, just as my youtube videos or Maves’ or anyone else is fair game for a November Turkey shoot…

If Lynn is going to compare that intention to Hogan… and post that publicly? I am more than open to having respectful discussion about his claims.

Who wants to defend that protocol?