Hey guys, new here but i know a little i think lol…anyways i was curious how you guys felt about hogans spine angle at address…it seems to remain constant throughout the bag, same of driver and PW…is this recommended or should it change depending on club selection

caddy view? or down the line view?

Down the line…im not sure what caddy view is tho

I believe face on is caddy view. 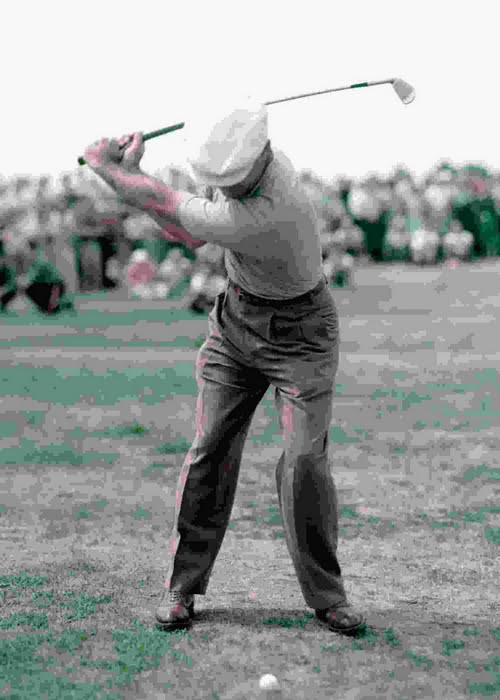 okay so i mean DTL…if you compare pictures of hogan hitting a PW or driver his spine angle is the same at address he just changes how close his hands are to his body…what are everybodys thoughts on this???

That is exactly what I try to do also…
If we are using a pivot driven golf swing, then the more erect the spine, the better, assuming we are going to turn flat and utilize the geometry of a flat or more level turn. The faster the left shoulder moves away from the ball post impact, the more pivot thrust we will have. This is also why players with really broad shoulders can absolutely smash it.

I played behind Ian Woosnam in the Australian Open at Royal Sydney and got to see first hand how he smashed it with such a level turn. I also saw where he was driving the ball to on the course. Very long, and not a big guy…

I don’t see any reason to be bending over the ball too much even if you are tall… you can always just bend your knees more.

As a pivot driven hitter, swing radius is NOT the objective. We want a big rotational turn, but the tighter we can keep the arcs, the faster we can turn.
Much like a figure skater going into a spin, they pull everything in.

If you take a close look at Hogan, you will see the arms are packed close to the body well past impact, and even a little bend in the left arm is a nod to resisting the outward pull of CF…

Okay, in true over-analytical fashion, I will illustrate what ‘adrwcav’ is referring to. I remember grabbing some pics of Hogan that were annotated with spine angles, etc. so here we go. I don’t like analyzing static photos too much but spine angle can be pretty important especially if you keep changing it. The first one is Hogan with a driver and the second is Hogan with a 7 iron (supposedly). The spine angle is pretty much 30 degrees in both cases and the only thing that changes is the distance of the hands from the body. As the club geets longer, Hogan’s hands move farther away from his body. I drew some angles on Lag’s pics (second one is not quite DTL) for comparison purposes. The spine angles of Hogan and Lag are virtually the same. Lag’s hands seem to be closer to his body overall, no matter which club he is using. I like the more hanging hand position of Lag if I were to choose between the two. However, check out the spine angle of Knudson…it is pretty close to 45 degrees! And Lag is taller than Knudson. That is one bent over dude. But it certainly seemed to work for him. I remember Jim Hardy saying that Hogan was his model for the ‘one plane swing’ and he advocates being as bent over as you can (like Knudson)to be effective at a one plane swing. Hogan just isn’t that bent over with a spine angle of 30 degrees (it feels upright if you try it) I don’t care what Jim Hardy says.
Also, my personal experience is the more upright I stand and the closer my hands are to my body through the impact zone, the easier my arms seem rotate through the ball from P3. And as I stated in the Axis Tilt thread, the more level (to the ground) I turn my shoulders, the less I come over the top (as long as my hips or shoulders continue rotating through impact). I may be the exception on that one though. 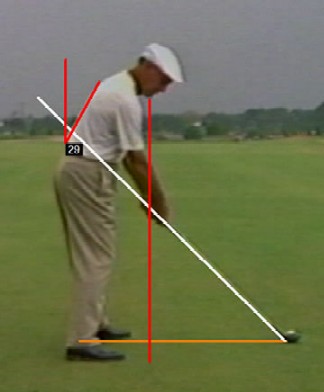 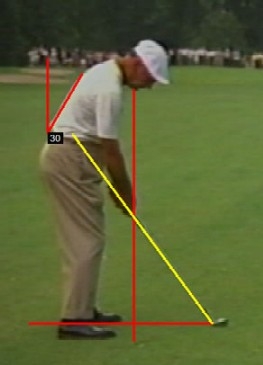 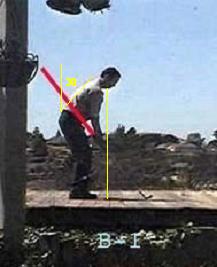 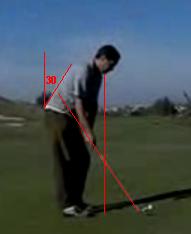 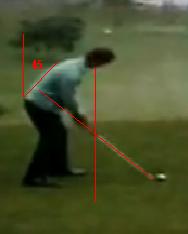 So what do you think is the best viable option…thanks for the pics btw…im curious to know if any of this would affect the lie angle of your clubs…also what is the desired impact fix in practical and TGM terms…thanks guys, just tryin to learn a little bit here and there…gonna start Lags course after the season

We are all built differently, but we can work toward similar objectives…
If we are going after a pivot driven hitting protocol, then maximum swing radius and how much we can crank on the shaft at transition all goes out the window.

A tall player like George Archer, bent his knees a lot to lower his center of gravity… good logic to that. He knew the advantages of a flatter entry into impact.

The more we bend our knees, the more erect we can get with our spine. A shorter player like Woosnam, can stand with his legs straighter and also keep an erect spine. The more flat rounded swing is easily accessible for shorter players… Ian Woosnam was very very long in his prime, and stood about 5-6?

Where a player sets their hands at address has only as much affect upon where the hands come into impact as they want or don’t want. I could go on and on with examples of players hands coming into impact on a different plane than at address… Even super pure golf swings such as Mac O’Grady, have hands that come into impact higher than address. Mac sets his hands very low to try to feel a closeness, and lots of wrist cock retained through impact, however, his hands come in significantly higher due to the outward pull of CF… but his intentions are spot on. Good stuff.

Knudson like to address the ball out on the toe of the club to allow for a bit of outward force happening in spite of his attempt to resist it.

Fuzzy, did the opposite, and put the ball right into the heel so he would remind himself that he would have to pull it in tight through impact to encourage connection and the CF fight…

I teach the student proper impact DYNAMICS that then create the geometry as an after affect… then allow the student to find their way back to and address or takeaway that feels right for them… as this is supported by all the different address and backswing protocols used by countless great players.

Thanks for the response Lag…ill be joining your class soon (i was the college kid who emailed you last week)…im prolly getting a little to analytical for my own good but im really trying to figure a lot of this stuff out…distance from the ball, spine tilt, hand height, ect…just wanna make sure things are perfect at address

thanks…look forward to your response

Welcome, and look forward to getting started.

Lots of fun concepts to learn on the path to properly striking a golf ball.

As you move through the course you will learn that your set up will likely change and evolve once you get a feel for how to correctly release the club actively into the impact arena. Everything takes shape from the epicenter of the golf swing, both pre and post impact.

As far as your clubs, the different lengths were designed very insightfully years ago for very practical reasons. All this will be covered as we progress.

You’ll love the Hogan PC’s … I have a set of them myself and are one of my favorite blades to play. Congrats!

However, check out the spine angle of Knudson…it is pretty close to 45 degrees! And Lag is taller than Knudson. That is one bent over dude.

We suspected before that the snapshot of Knudson was taken from a widescreen tele that stretched him horizontally. His shoes otherwise look to be about size 15 and note how wide the driver head looks. Correcting the image looks more natural and would give him a 35 deg angle. 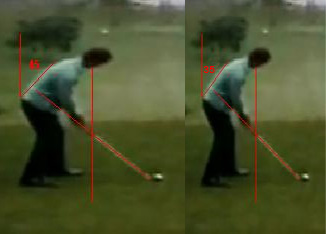 Are there any pictures in his book that might confirm this?

Good eye. I just thought it looked funny because of the quality. I was surprised that it was 45 degrees when I measured it for that original post but considering the description in some articles of how bent over he was, I just figured the 45 degrees confirmed the description. Now I wonder…

This is exactly why I don’t obsess over measuring angles, other than the clubs I use…

Each student is built different, and will be accessing a slightly different 4:30 entry. Knee bends will vary, torso angles…
but certain principles remain the same… more relationships… We can all apply correct pressures into the right joints at the right time, and keep stess upon the shaft and move it on plane…

This is why everyone’s swing will look different, but will be seeking a sameness in dynamic quality and intent.

I just watched 3 hours of MORAD stuff this last weekend that a student sent me, and my thought is that there is WAY too much talk about angles and positions… Mac definitely wants everyone to swing precisely like he does. I really don’t think he talks enough about how these angles are created through dynamic motion. Never really talks about it. I do believe he knows, but maybe he doesn’t focus on it as I think he should.

His students looked completely lost like deer in headlights.

Lag,
I agree Morad is a bit overwheming with numbers and it’s great that Mac did the work to figure exactness but trying to move your hips ,shoulders,knees in degrees might be more simplified by moving them 2to 1 ratio and so on.

another quick thought…is it okay to come into impact with the shaft pointing under the elbow plane…i consistently do this…good or bad?

bag work takes care of it for you…
You’ll simply feel where the support needs to be because of the force of the bag hit.
People get into trouble hitting just golf balls because the small light ball offers little resistance for us to leverage against.

Lag,
I agree Morad is a bit overwheming with numbers and it’s great that Mac did the work to figure exactness but trying to move your hips ,shoulders,knees in degrees might be more simplified by moving them 2to 1 ratio and so on.

But even 2 to 1 - how can a mathematical ratio (or specific angles) mean anything to a completely organic substance such as the body, or even a tree? We have no straight lines in us, no right angles, our ball joints aren’t perfect, we’re not even perfectly symmetrical. We simply aren’t an industrial machine. Average figures apply to no-one in particular–I really don’t see the point of it all.