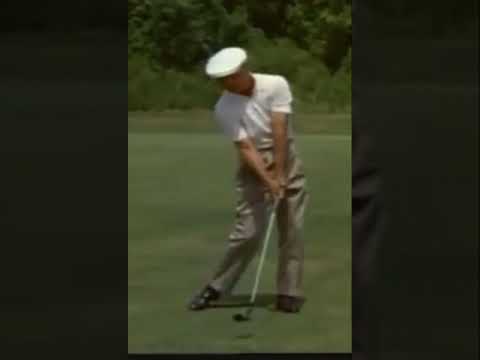 I’ll ask a dumb question. What does HIT release mean? I was guessing you mean a hitter’s release like what is promoted in abs. I wasn’t sure if that was an acronym or something else though.

No, you’re fine. Yeah hitting protocol. Just pointing out that Hogan released the club and that it didn’t pass the hands. The active intentions are to line it up like he did in the short video.

You stated that the club did not pass his hands in that short video.

However, that was not a full golf swing action, but an abbreviated demo-move.

In his full golf swing action featured in that video, the clubshaft bypassed his hands after impact - as seen in these capture images from that video.

He cannot possibly be “holding shaft flex” in image 3 because the clubshaft has bypassed his lead arm (from an angular rotational perspective).

He cannot possibly be “holding shaft flex” in image 3 because the clubshaft has bypassed his lead arm (from an angular rotational perspective).

The clubhead releasing pass the hands doesn’t mean anything so long as the torso continues to turn. It’s a release, but not to be confused with a Phil Mickelson type of swinger’s release, where the trail arm is straight AT IMPACT or shortly after. 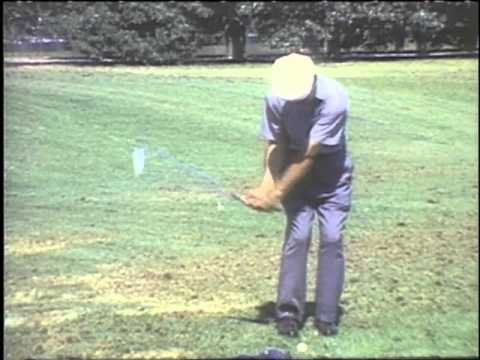 ✂️ The closest Hogan gets to stopping and stalling...

He’s still got a slightly bent back right wrist and flat left, the club is rotating round the left forearm via left wrist supination, club hasn’t passed his hands aka left arm flying wedge intact aka rhythm etc. You can even see the shadow in the back of the right hand. I’ve only seen one clear picture, ever, where he has right hand in flexion and suggestive of left hand in extension, driving the ball at Oakmont 1953 in grey attire and white cap, presumably hitting a draw and one video, Carnoustie 1953 black top, where you can surmise his hand action, again presumably hitting a draw/modified his hand action because of the hard turf.

Many videos that despite the low frame rate, show an intact flat left wrist through the strike even with the left wrist going from flexion to extension, indicating the club hasn’t bypassed his hands insofar as an intact LAFW. Especially those from behind.

Here’s a few that show his left wrist rotated to advance the club and didn’t break down:

I also think you see holding shaft flex, eg against an impact bag, as TGM handle dragging. Nursing the deadweight, drag the wet mop et. Whereas I interpret what lag as saying is the whole of the profile of the club is eg against an impact bag, pinned against the bag. The hands are aggressively rotating the clubhead end into the bag, the pull of the torso rotation is creating stress at the grip and the entirety of the club is pinned. Without pull it’s a flip. Without clubhead being rotated in it’s a less forceful drag.

Yes, that would be correct…

I think that in the 4th image that you presented of Hogan, he cannot be “holding shaft flex” because the clubshaft has bypassed his lead arm from an angular rotational perspective. Note that his trail wrist has straightened in that image, while it was significantly bent in all the other images. Note that his trail forearm even looks slightly pronated in that image and that his clubface is rolled over so that it is not square to the clubhead path.

I have seen a number of Hogan capture images soon after impact that look similar to that 4th image - where the clubshaft has bypassed the lead arm (from an angular rotational perspective) and where the trail wrist has straightened/flexed too soon after impact.

Look at how fast the clubshaft is bypassing his lead arm between image 3 => image 4.

I was going to post the picture from Leadbetter’s book, his left wrist hasn’t broken down even at that later point.

4th image you can still see pressure against his right index finger and shadow in the right wrist showing it’s not completely flattened out.

The row of images from SWWOG as I’ve said you can see the same.

Insofar as all that might indicate holding shaft flex I think it could.

But all this is not relevant. I can’t emphasise that enough. Just a tangential discussion whereas the images are effective by being suggestive in a big sense and I think players improve by looking at big concepts and big feels and intentions and causes, not micro analysis of what are effects.

So none of this focus on the minutiae is relevant. What’s relevant is what he was intending to do and the result it produced.

What makes bad players hit successful shots? What makes relatively poor drivers of the ball still be able to be accurate and long enough to play the tour? It’s not just that the stars align mentally and they have an absence of clutter. It’s that in those moments they swing the club in rhythm.

I think John’s description of orbit pull and intent to hold shaft flex through that and focus on hitting acceleration is the most convincing explanation as to how the best ballstrikers reproduce rhythm. And why lesser players don’t.

I would be genuinely more interested Jeff if you could describe the feels and intentions that worked best for you and produced the best results under pressure of competition. Especially in comparison to John’s concepts. I find that sort of discussion more substantive, rather than one person who can say first hand how something is, whereas the other presents speculation as to how someone else might be doing something.

If you look at the 4th image of Hogan, note that his lead humerus is much more externally rotated so that his lead antecubital fossa faces the camera. That excessive degree of external rotation of the lead humerus causes the clubshaft to bypass the lead arm (from an angular rotational perspective) even if the lead wrist does not breakdown (rapidly extend) post-impact. Under those conditions, I do not believe that it is possible to “hold shaft flex” during the early followthrough. It is irrelevant whether his right index finger is applying pressure against the aft side of the club handle (as you suggested) if the club is bypassing the lead arm (from an angular rotational perspective).

You stated that Hogan tried to “hold shaft flex” into his early followthrough on every shot. That is pure conjecture on your part.

I can accept that Hogan could be “holding shaft flex” in these early followthrough images.

In this particular swing action’s early followthrough, he is rotating his pelvis/torso much more assertively counterclockwise and his hands are moving very much inside-left. Note that he keeps his lead humerus internally rotated throughout his early followthrough and he does not allow the clubshaft to bypass his lead arm (from an angular rotational perspective). He also maintains a bent trail wrist to well beyond impact.

However, in the following particular swing action’s early followthrough, he is manifesting a totally different biomechanical approach.

He is not directing his hands inside-left very much. He is allowing his lead humerus to externally rotate a lot and that causes the clubshaft to bypass his lead arm (from an angular rotational perspective). He allows his trail wrist to fully straighten in such a manner that his trail hand rolls over his lead hand (which has rotated much more counterclockwise than in the first set of capture images so that his lead palm is facing the camera in image 4).

I cannot audaciously claim that I know what’s Hogan mental intent was in this particular swing action, and whether the biomechanical differences happening in the early followthrough are intentional, or not. However, in this particular swing action my suspicion is that Hogan was not mentally focused on the “ABS-idea” of “holding shaft flex” to well beyond impact in the manner that John Erickson recommends.

I know it’s conjecture Jeff, that’s obvious? Same as what you are doing. All you are saying, as nauseum is ‘look at this picture, this attitude of club and/or body part suggests to me he isn’t doing what John is saying he is doing’. I get it. I suspect everyone has got that. Repeatedly.

Again the SWWOG video I have two thing to point out but it’s clear you are missing the point now. I don’t think you understand what John means.

I don’t think it’s audacious to offer your opinion and in fact, you immediately go and do so.

Jeff, please tell us about your personal experience of forces and pressures and feels, especially under competition conditions, and perhaps how they do or do not relate to what John promotes.

Apparently, he might be doing one or the other or a mix of both and it could be different between swings.

I’ve read the term “angular rotational perspective” on the forum more than I care to count, but what in the hell is it?

You wanted to know how I recommend that a golfer should perform a release action through impact.

Here is my answer.

Sorry please post here mate and not promote your own forum. Sorry.

Also not interested in what you recommend as such - what you have felt and especially under pressure what has worked not worked. Especially as appertains to this discussion.

Also I did do you the courtesy of hitting that link and sorry, had to stop reading after I saw the amount of detail.

You can’t base your observation on still images of Hogan because he is accelerating far beyond the ball like all great ballstrikers. All the content that I comment on of Hogan are live action for a reason because of the dynamic of a hitting protocol. Mickelson (swinging protocol) can be shown with a still image because he “throws” ALL of his acceleration AT the ball and doesn’t have ANY left post-impact (i.e., P4). Hogan or anyone that uses their pivot “pulls” the shaft THROUGH impact (hitting protocol). The benefits are better accuracy because you have more control with a pulling motion versus a pushing/throwing motion. An analogy of pushing/throwing is like Curling in the Olympics without teammates. A pulling motion would be like the Snatch lift. All you need is just enough acceleration to complete the lift, but having more won’t hurt and if anything it makes your move easier. Hogan’s acceleration is so great that even at P5(!) the club is still carrying speed. 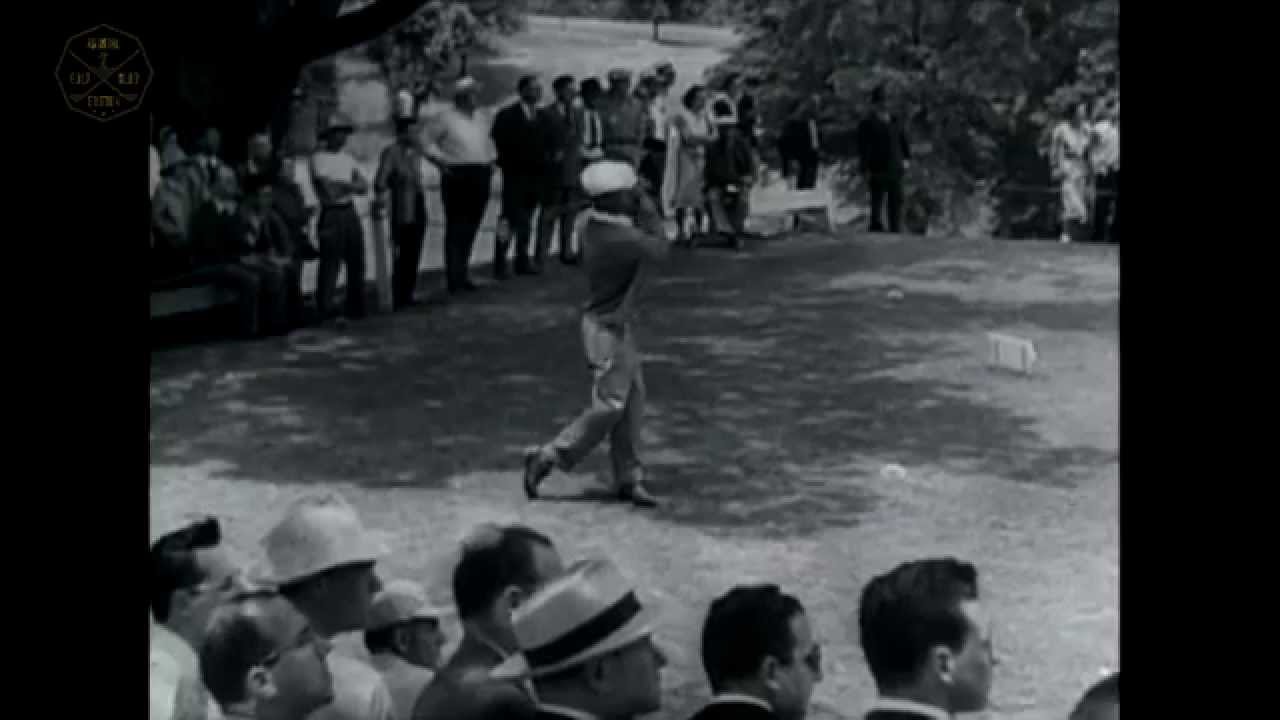