This is an amazing coincidence! I kid you not - I was just searching for this illustration at work on the Internet (didn’t have my copy of 5 Lessons here…I know, shame on me) as the action that Hogan is portraying is what I’ve worked into my pre-shot routine to get a feeling of the sequence of firing through the impact zone and the heaviness of holding wrist cock.

Note most specifically, Hogan’s shoulders move very little from P3 to past impact. The hands are firing! Hence the butt end of the club pointing back to the belly button…not that Sean Foley “move the whole shaft with bent left wrist” crap he’s trying to get Tiger to do. Then (last pic), module 3 really engages!

A second note: the similarity of Hogan and Lag is completely coincidental and probably not germane to any discussions on this forum. Oh, and these aren’t the droids you are looking for.

I’m struck by how much distance the hands cover relative to the body in the initial downswing–it doesn’t seem so much like the hips providing a free ride but the hands dropping first then the free ride into P3. I don’t know, I hope to look back in amusement at these early posts in a year or two.

I know Lag doesn’t encourage overblown comparisons but I always like looking at this pic so I thought I would share it for those who haven’t seen it. 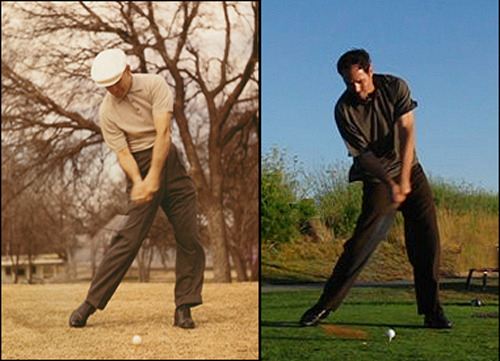 Well, having burned Hogan’s action into my mind (as I’m sure most of you have), I was actually trying to understand the individual modifications that Lag has tried to incorporate into his swing by blending some of his favorite actions from knudson, hogan, moe, etc… I was actually looking at this particular sequence and noticing that his action from this view is quite unique and not an attempt to be a carbon copy of hogan. Then when I came across this illustration, which also doesn’t look like hogan’s swing at full speed, I recognized that once again it must be all about the ‘intentions’. Obviously impressive that John can duplicate these positions at full speed with a 2 iron.

Incredibly deceptive sequence out of 5 Lessons imo… at least as it relates to ABS. Figure 7 seems to be way out of sorts compared to what Lag is teaching. A full “dual horizontal hinge action” as far as I can tell… extreme clubface rotation with the right arm crossing over the left.

I agree that the drill in the illustration and the video link is more of a ‘dead hands’ type swing, with the elbows pinned which isn’t exactly CF/horizontal hinge (i think). Seems to me that it’s just a drill to get novices learning what it feels like to be connected. However he does tend to make his practice swings like this, and it did surprise me to see ‘lag’ hitting all of those same positions in this hitters/CP intentioned swing.

I don’t think anyone is saying that “5 Lessons” at face value isn’t loaded with feel vs real issues, and Lag has been able to decipher many of them. The Hogan vid looks quite a bit different to me compared to the book pics.

There is much to be learned from the matching “7th picture” from Lag’s sequence that provides important clarification/differentation.

Great vid. Note the way either foot leads the way back and through. Billy Casper’s step away is in there, as is his downswing…

Incredibly deceptive sequence out of 5 Lessons imo… at least as it relates to ABS. Figure 7 seems to be way out of sorts compared to what Lag is teaching. A full “dual horizontal hinge action” as far as I can tell… extreme clubface rotation with the right arm crossing over the left.

Agreed, Robbo, so many of his thoughts were misleading or misunderstood to say the least…

Correct, it isn’t what we are supposed to do verbatim. However, what I take from it is the cupped left wrist, finding 4:30 line in a relaxed manner, and fire the hands. Then I add: keep the right elbow bent, hold wrist cock and then let module 3 take over without crossing over.

I agree - there are things in that Hogan illustration that don’t fit what we do, but I think there’s enough there that I like the mental image.

Take it to 29 seconds and start the tape. What do you see immediately–it’s almost imperceptible…

Are you referring to the footwork in the “practice swing” video? Or something in Hogan’s takeaway in “feel vs real”?
Thanks Paul

Are you referring to the footwork in the “practice swing” video? Or something in Hogan’s takeaway in “feel vs real”?
Thanks Paul

At 29 seconds where he’s addressing the ball before pulling it back. It looks like he pulls the handle of the club behind his right hip, not laterally back, causing a lagging club in the takeaway which sets off a chainreaction at the top where in transition, the body moves forward while the clubhead is still moving and settling in to the top. So his first move is this. You can also get this effect by pulling the right elbow back first before anything else. Just fun to speculate…

I don’t think anyone can objectively look at that video and the 5-lessons illustration and NOT say hogan was a swinger. Now we will never know what Hogan was truly feeling as intention of certain body parts during a real golf shot on the course {compared to practice swings or vids made for the public} but this vid really changes my thinking about Hogan and I can now only assume his right hands statement just meant a late slap.

I do know that Hogan looks to have many different looking swings. Many appear “dead arms/hands” swings and some not. Some do have the look of a CF ‘crossover’ release and others do not. This only adds to the confusion of classifying Hogan and I suppose all camps could be right depending on what evidence one uses to show. Weird. Maybe Hogans secret is that he mastered CP AND CF and used whatever was best for the day. Who knows anymore.

It is confusing, no doubt. This is how I have assimilated what I now know of the works of Slicefixer, Mike Maves, Manzella, and of course ‘Lag’, not having taken a formal lesson YET from any of them.

In the video that you mention, Hogan is ‘clutching his sides’ and simply rotating back and forth, while allowing the arms and club to be carried passively. You will notice that he is of course more upright (and less knee bend) and therefore is NOT truly engaging his Pivot or any significant ground forces as he would be IF playing a real shot.

Now, I hesitate to post this, but it is merely an ‘excerpt’ from Mive Maves ebook “Secret in the Dirt” (credit given). It is only a small part of his explanation of the ‘cup to bow’ or ‘tripping the shaft’ as he calls it. A more complete explanation can be had if you do read the entire book, which I feel has tremendous insight and shares much in common with ‘Lags’ teaching philosophy. Anyway, it appears to me that Hogan did ‘hit’ if that means to actively (although subconsciously) turn the clubface to square, this has been discussed in another thread on this site where the X and Y forces on the shaft were discussed in reference to ‘the string drill’.

Excerpt:
"Now the reason that this works is that you are pressuring the shaft only up
and down with the left hand and directly forward with the right, because the
bonus of this little “trip” maneuver is that the right hand moves into a
powerful position to push; and this is where Hogan tells us he wishes he had
3 right hands. He meant that! Everyone has looked for this move in the
impact area, or as the first move in the downswing, and has not seen it
because it is not there. He spelled it out quite plainly in Five Lessons if you
simply look at the drawings on page 98, where it is quite clear that the turn
of the handle happens after what he described as the “Free Ride” of the
hands and arms, with the plane shift initiated by the hip turn in transition.
The effect of this realignment is what I have always called “Tripping the
Shaft”. Tripping the shaft puts it back into alignment both to be pulled best
by the left hand and to be pushed best with the right, while retaining the
right side leverage point necessary to take advantage of the newfound
leverage at the bottom. The club rockets through, and does so squarely. It is
square to its arc before it even passes the back foot and remains so through
impact.

For it to work, however, you must still have right side pressure and the
hands must be coming into the hitting area. This means that Hogan’s move
is useless unless you can execute the correct pivot. To execute Hogan’s pivot
you must actively use the ground as I have described earlier. You must
accept the dirt as your most critical point of leverage and commit yourself to
using it. " (Secret in the Dirt)