There have been some remarkable photographs taken at just the right instant to show the raw emotion of the situation: 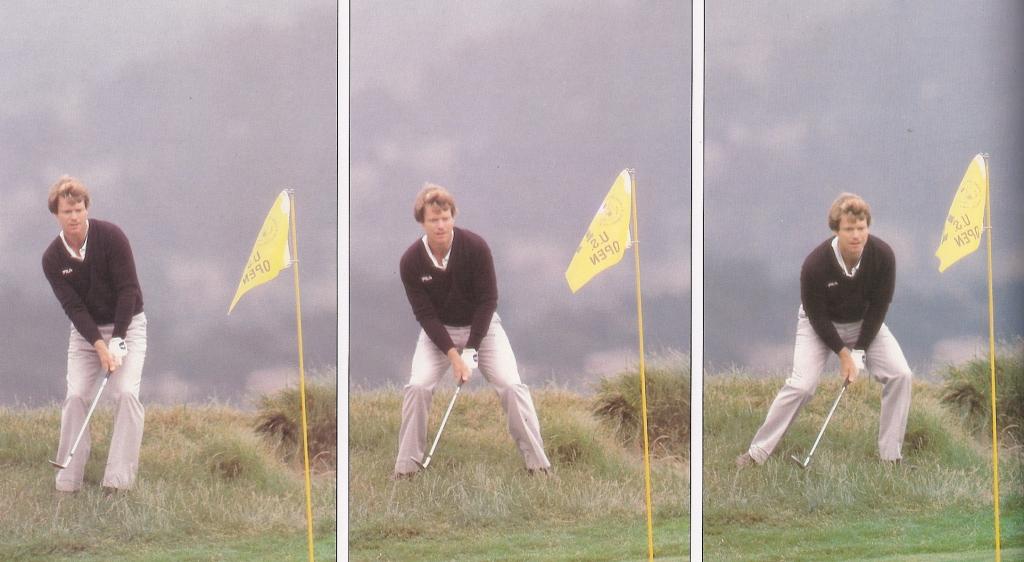 True sportsmanship and respect for each other- Tom Watson and Jack Nicklaus walk off arm in arm after their epic “Duel In The Sun” at Turnberry in the 1977 Open Championship… they were so far and above the competition that week Hubert Green finished 3rd a distant 10 strokes in arrears.
No-one will ever forget the heroics both these greats of the game hit each other with right down to the wire with both players birdieing the 72nd hole for Watson to clinch his one stroke triumph 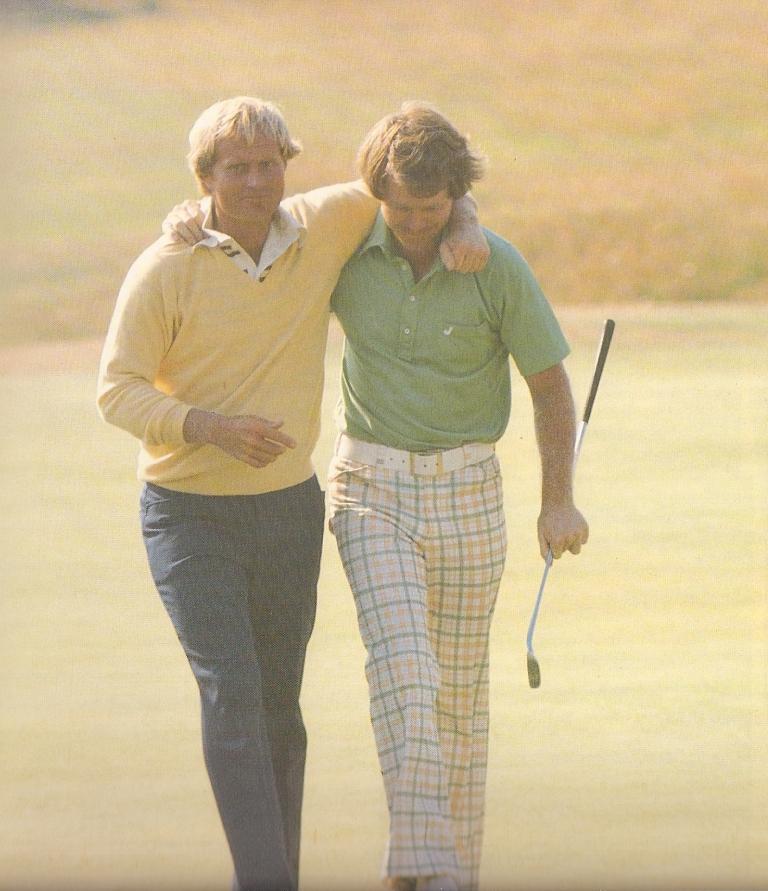 Seve Ballesteros- always one for theatrics managed to pull off one of his greatest achievements by holing a birdie putt on the 18th green at St.Andrews in 1984 , which would eventually be the winning stroke. You can see the sheer joy on his face as he knew his dream of winning The Open at the home of golf was about to come to fruition. 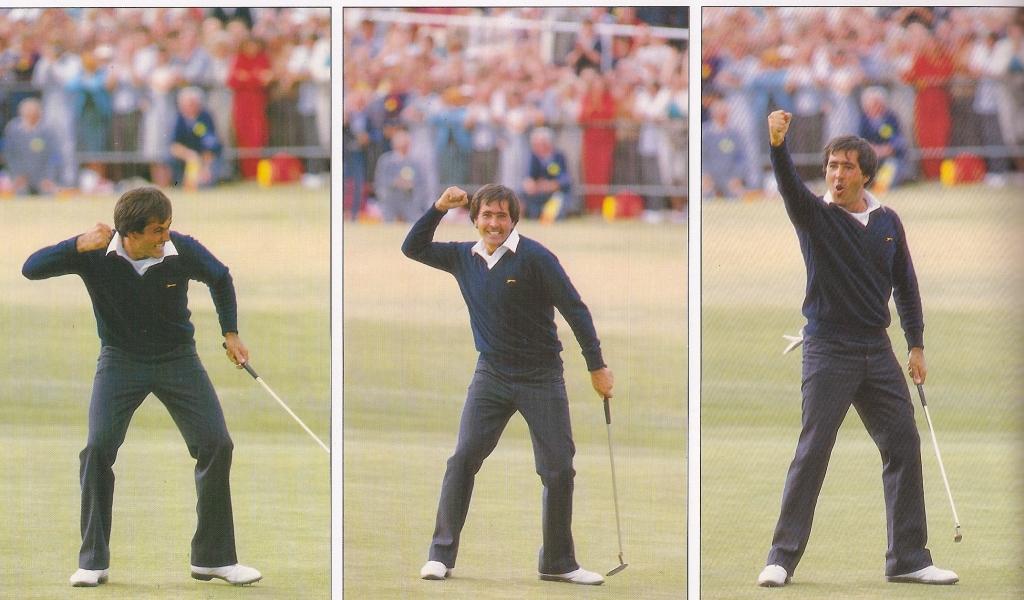 Sam Torrance captured at the moment of disbelief at holing the winning putt in the 1985 Ryder Cup at The Belfry. This putt clinched the Ryder Cup for the British/European team for the first time in 28 years and a grand celebration was had by all that evening. It started a terrific run for the Europeans at the Ryder Cup as they found new confidence 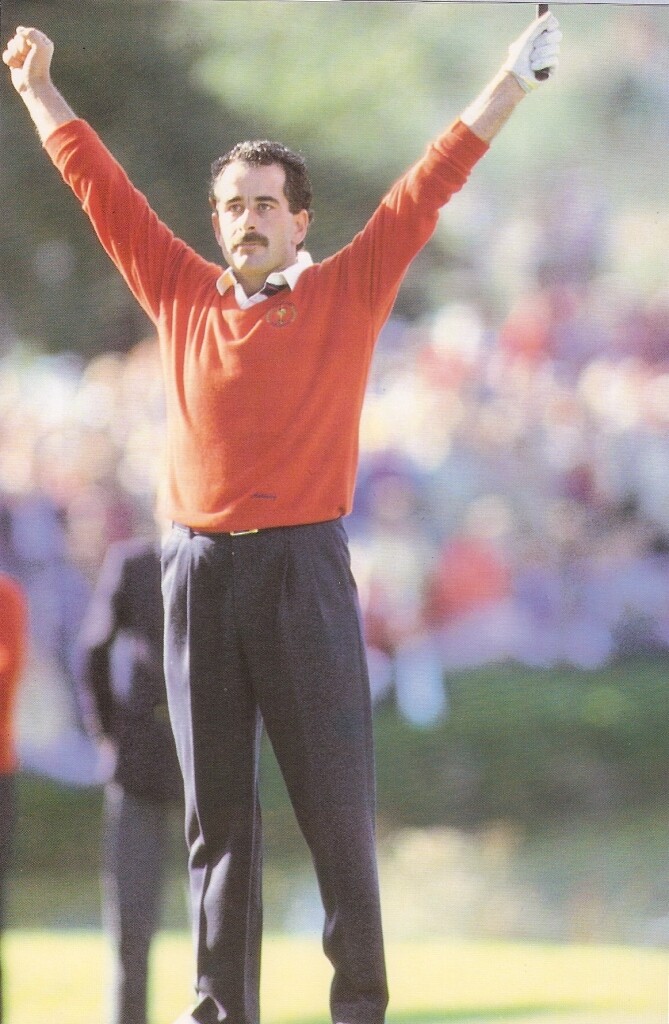 Larry Mize- 1987 Masters
After Seve Ballesteros was eliminated on the first playoff hole it looked like Greg Norman was finally going to get his green jacket he so desperately wanted…with Mize missing the 11th green 30 yards right of the flag and Norman safely on the edge of the green it seemed a Norman 2 putt par would be enough—until Mize holed this incredible pitch and run up the slope and down into the hole
Mize became the first ever Masters Champion to be home grown and raised in Augusta, Georgia 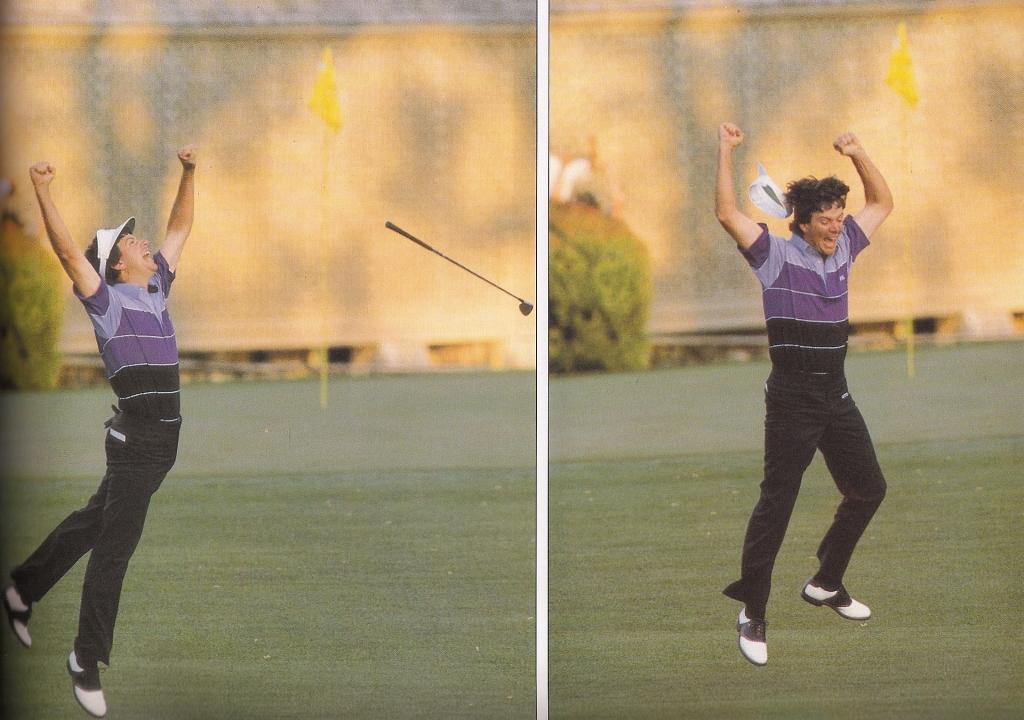 Tze Chung Chen (T.C Chen) watching his ball in disbelief
the scene…Oakland Hills in Michigan …1985 United States Open
TC had a double eagle/albatross in his first round and continued his great play by equalling the then record score for 36 holes and 54 holes in US Open history. He held a 4 stroke lead coming to the 5th hole on that fateful sunday where he flared a 4 iron just short and right of the 5th green. He then managed to double hit his chip shop almost flicking the ball backwards to the left as the ball caught his clubface on his follow through. he was penalized for a moving ball violation and ended the hole with a quadruple bogey 8 on the par 4 hole…and as fate would have it he would eventually lose by 1 stroke to Andy North
you can see the official/gallery marshal in the background signaling that Chen in fact hit the ball twice 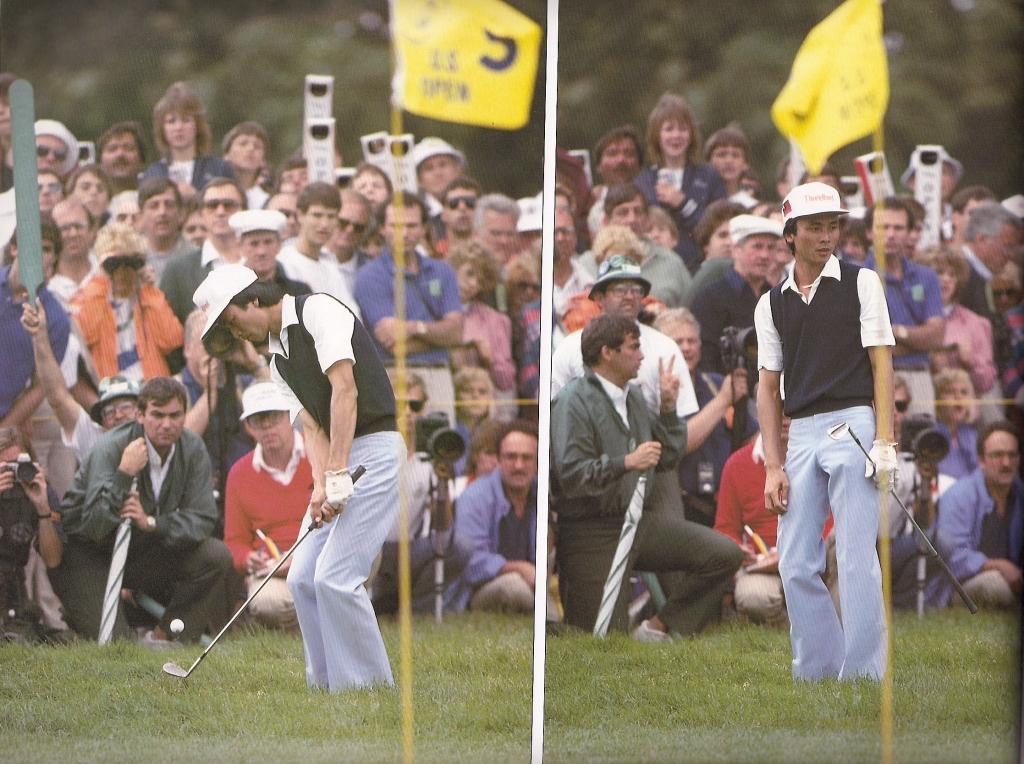 Tway playing stellar golf on the back nine had pegged back Norman’s lead and they were all tied coming to the 72nd hole. After Tway dumped his approach into the front right bunker from heavy rough it seemed Norman would be in the driver’s seat-- with a downhill green breaking severely from right to left, Tway exploded out and jumped for joy as his bunker stroke hit the flag and dropped in for birdie and he was now a major champion 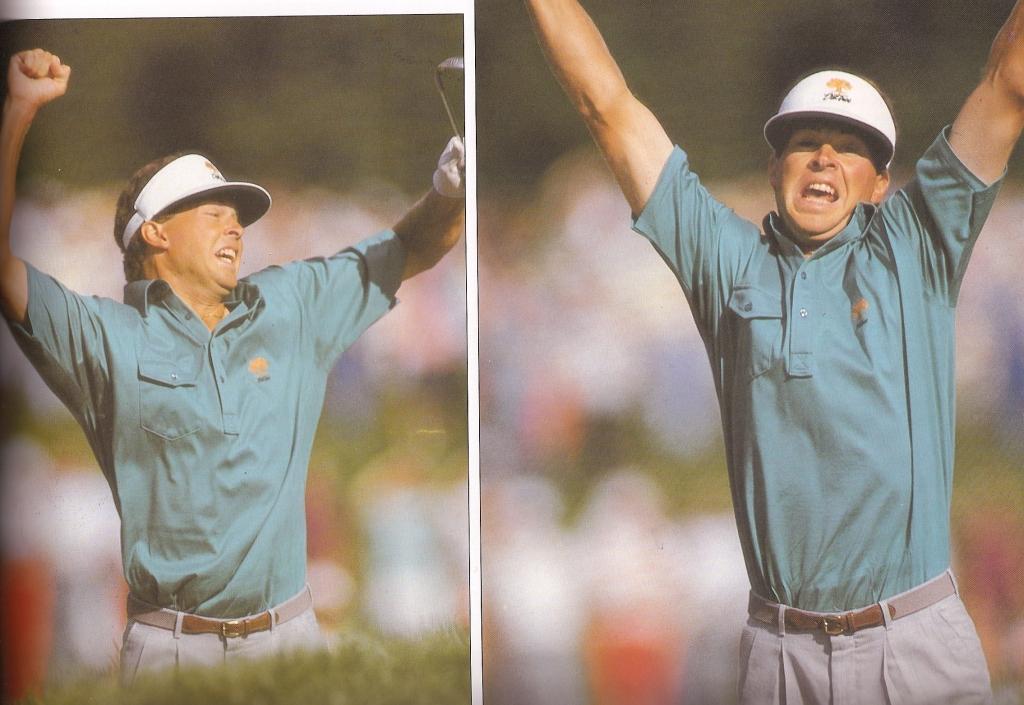 Jack and Jackie Nicklaus- 1986 US Masters 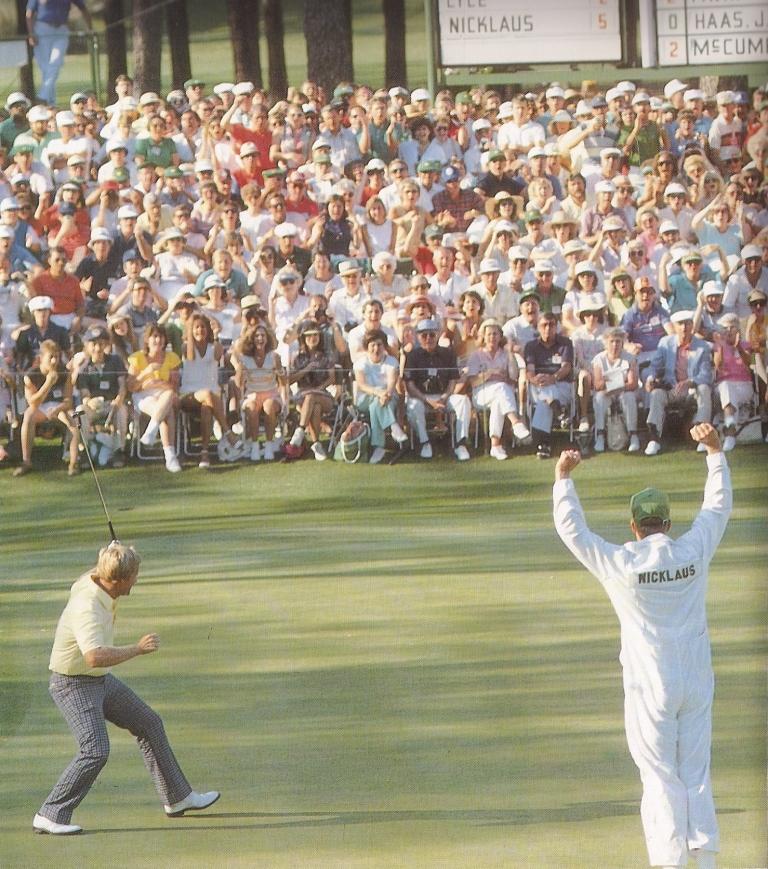 Curtis Strange 1985 US Masters
After shooting an opening round of 80, Curtis Strange bounced back into contention with a second round 65 and by the time he came to the 13th hole on sunday he had the lead and was about to make Masters history.
After a good drive on 13 he decided to go at the green with a fairway wood in an attempt to increase his lead-- the move backfired as he dunked his second shot into Rae’s creek and made bogey. He would suffer the same fate on the 15th hole a few moments later and Bernhard Langer would charge past and steal the green jacket from his back. 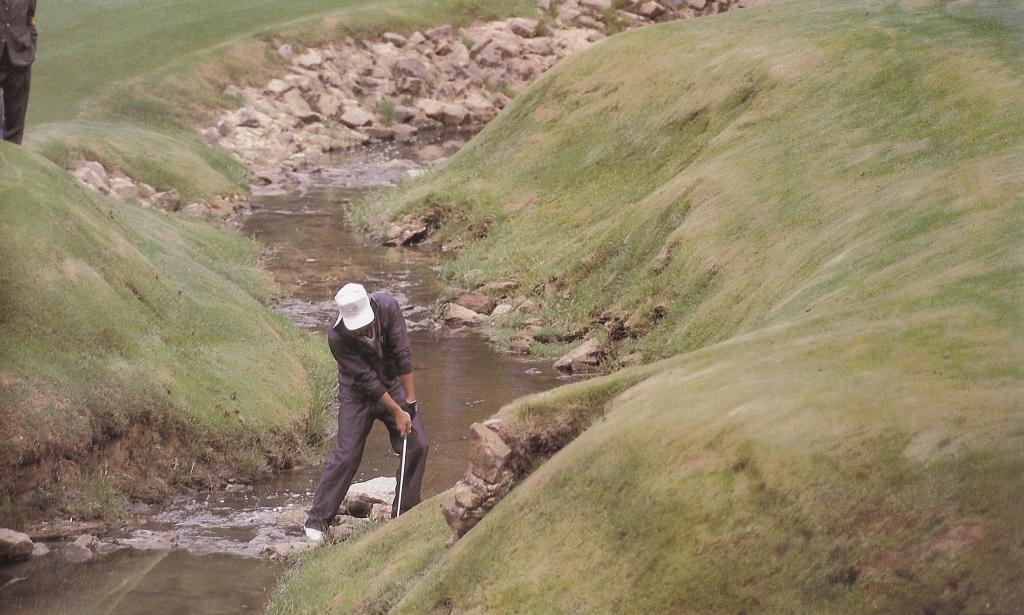 The event moved across the street to the new TPC at Sawgrass. The first tournament stadium course. It was too tough according to many players and many showed their disgust.
Jerry Pate came out on top that week --even using an orange golf ball !!— and proceeded to throw commissioner Deane Beman and course designer Pete Dye into the lake surrounding the 18th green for building such a beast of a course…before taking the plunge himself 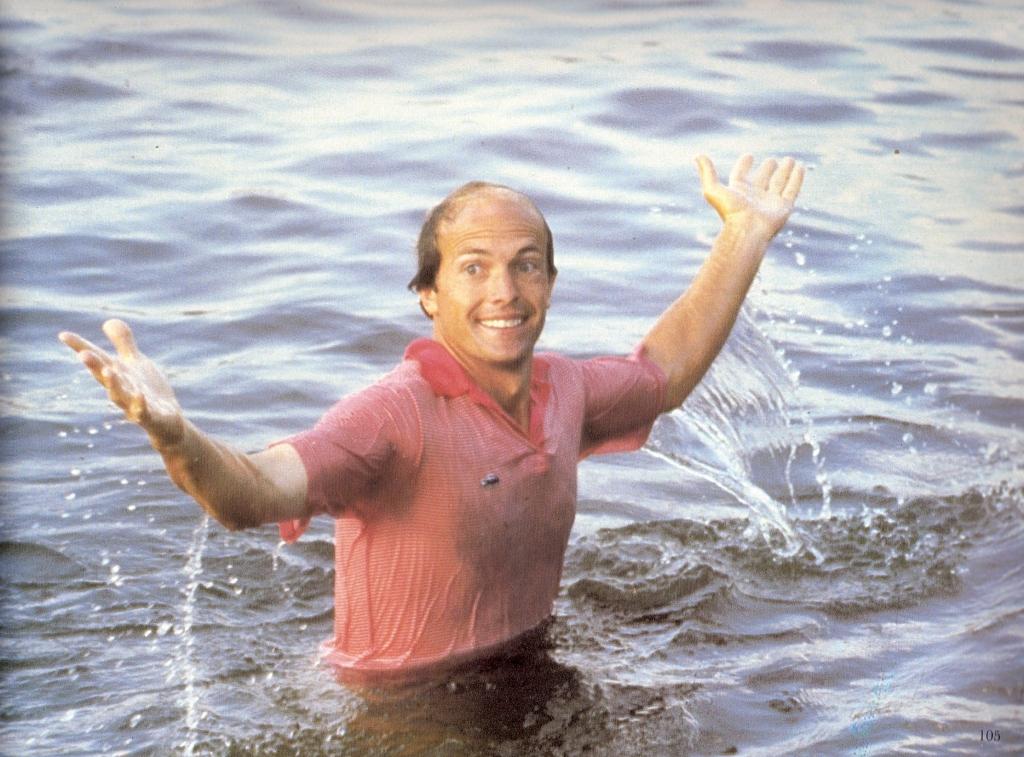 Long regarded as the greatest golf photograph ever- Black and White seems to capture the moment- although there is also a color re-sketch of it.
Hogan’s second shot to the 72nd hole needing a par 4 to tie 15 months after his accident on legs that were beaten and battered and 36 holes were played on the final day
there is a lot to see in this photo

What do you think the divot reveals, if anything?

What do you think the divot reveals, if anything?

Great observations there TM. The gallery must really have known Ben Hogan was going to pure that shot judging by how close they were to the action. Lots of history in that shot/photo.

Here’s a cool photo of Greg Norman on the other side of the lens- snapping shots of his teammates Rodger Davis and David Graham as Australia are about to win the Dunhill Cup at St. Andrews Old Course 1986 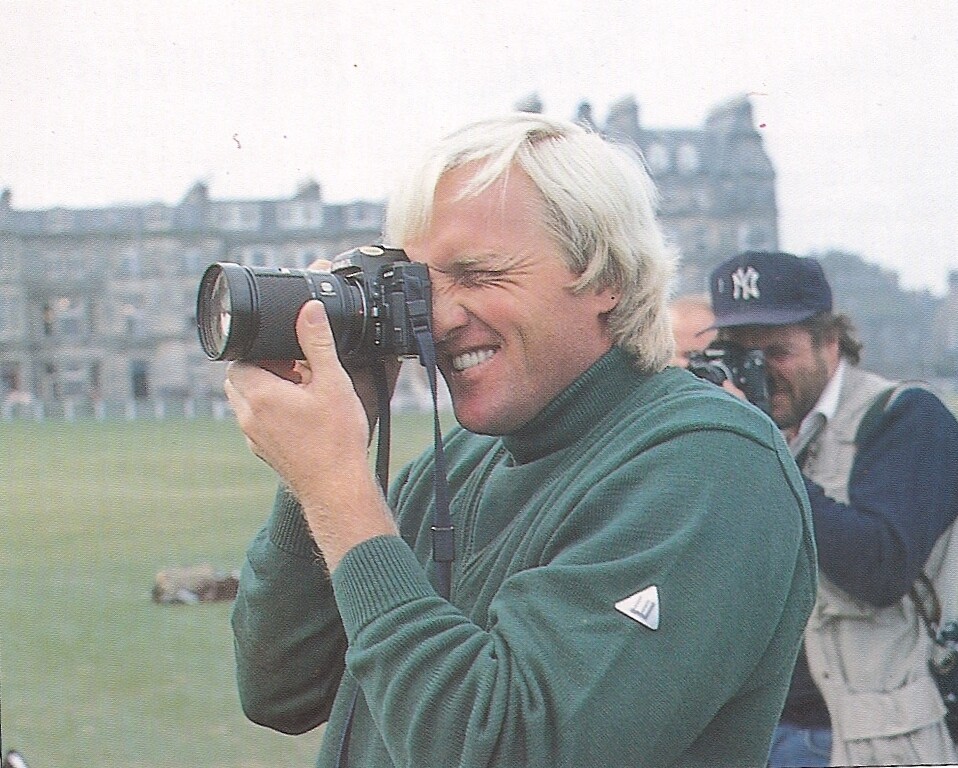 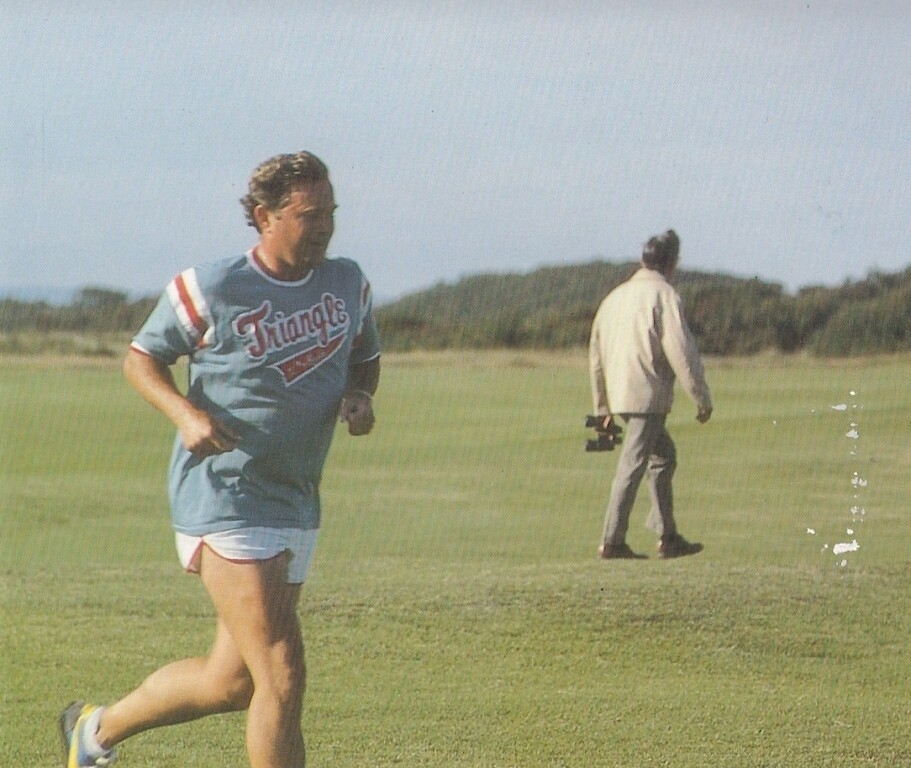 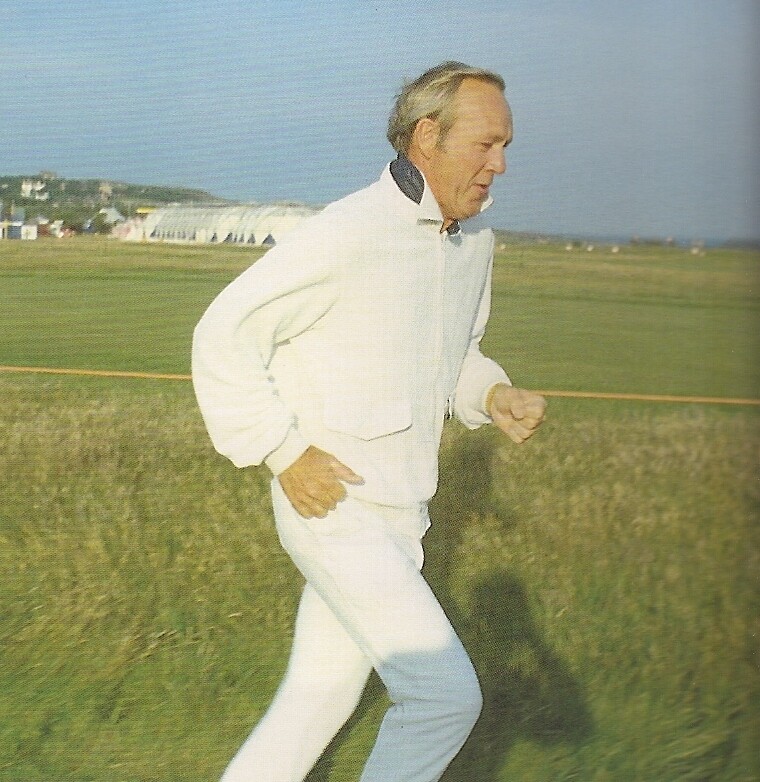 The King- Arnold Palmer in a more relaxed mood 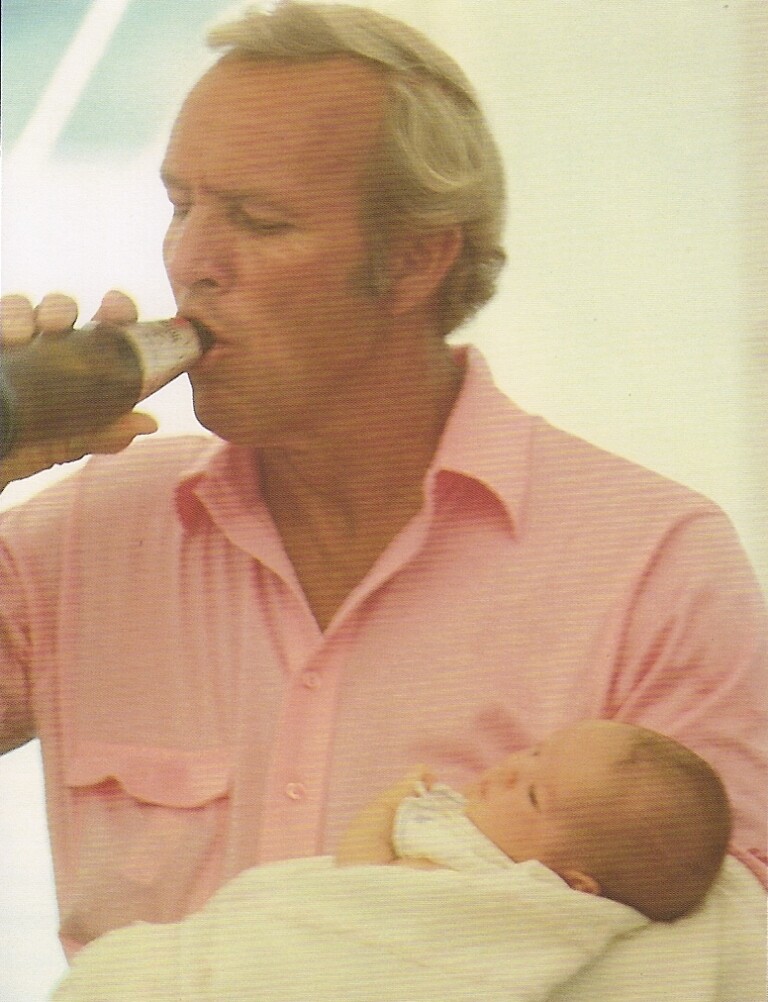 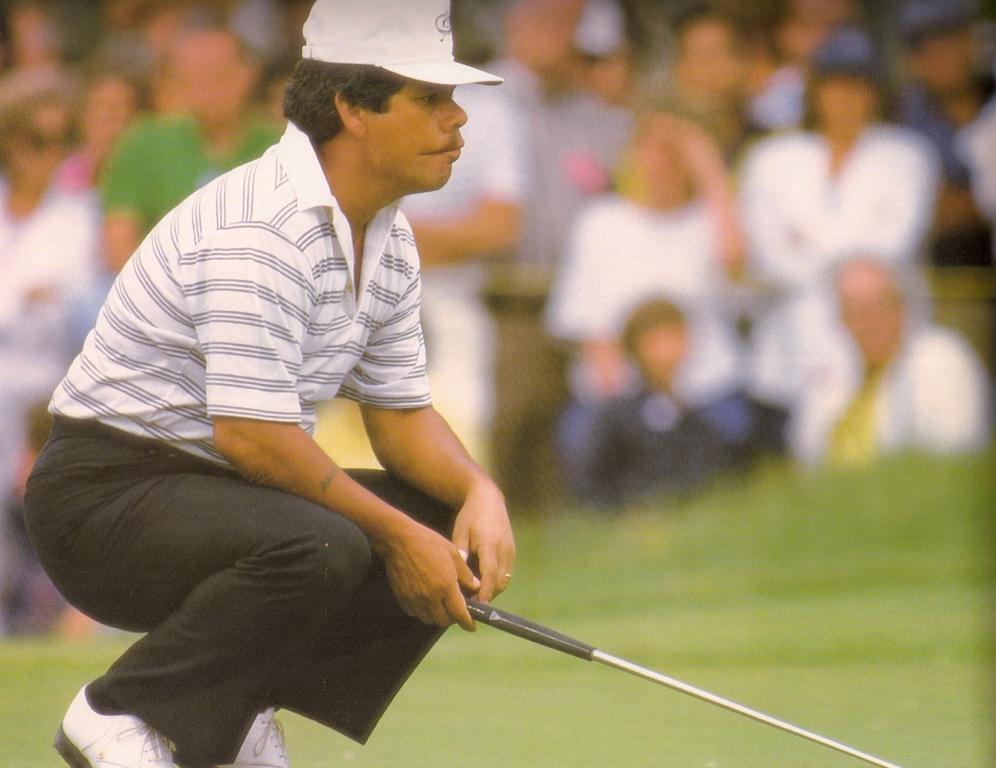 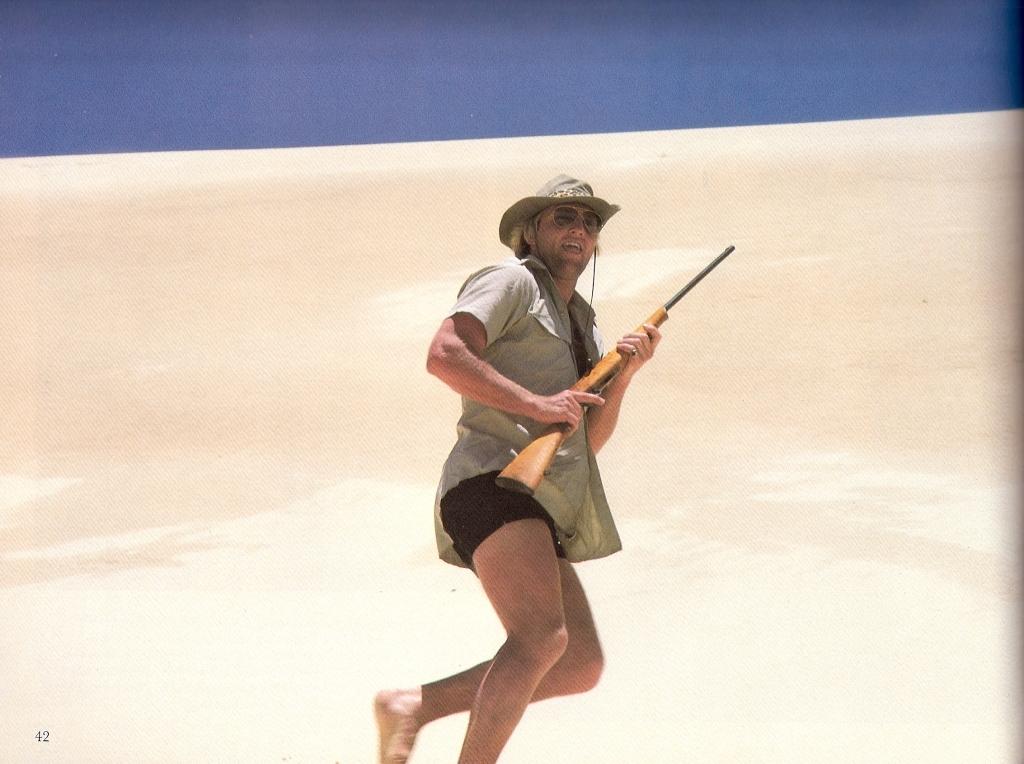