I have just completed flattening out 6 Persimmons and am offering 4 of them for sale, 2 are already taken by a fellow student.

All are built the best I can to Lags specifications. All have ½ inch tipped TTX100 shafts, full cord grips with 2 wraps of tape. All have lead added to the head and are butt weighted with lead tape under the grip to bring the SWs back down. All are heavy in both swing weight (D5) and dead weight. The dead weights are a guide only (just done on my kitchen scales till I invest in some really accurate scales) All of them sit great to my eye, either square or slightly open.

I would like to point out that I am not a professional golf clubmaker. I have done the best i can to do a good job and I hope to be flattening out some more soon. I have done 14 of these now and have had 2 of them crack (the first 2), though it was after a fair bit of use and I have significantly changed how I form the neck area since then, so hopefully that won’t happen again.

If anyone has any questions or would like some more photos let me know.

Macgregor M85 Driver Eye-O-Matic
Lie 48 degrees
Length 43 inches
Dead weight 13 1/2 ounces
Colour Black Opaque stain Semi Gloss
Perfect U grain on this one. Really small head. Finished this one in black as you tend to get less attention on the first tee with a black persimmon 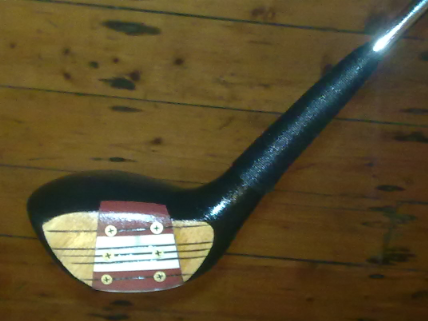 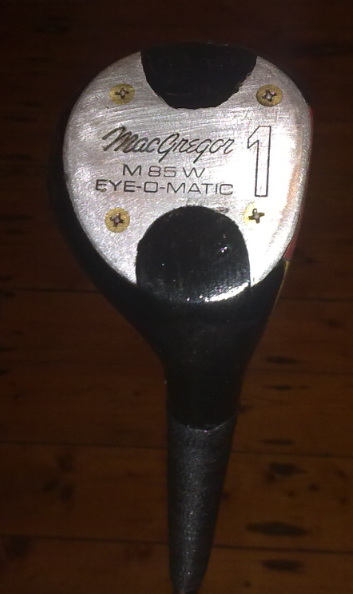 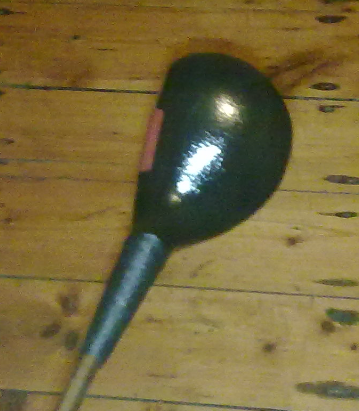 Macgregor Tourney DX George Bayer Driver
Yellow/Black Keyway insert
Lie 46 degrees
Length 43.5 inches
Dead weight 14 Ounces (Very Heavy. Lag likes to practice with 14 ounces)
Colour Rosewood Opaque stain Semi Gloss
Deep faced so quite a big head. Possibly suited to a smaller player cause of the lie angle. Have left the original finish on the face as it will hold up better than the lacquer that I have been using 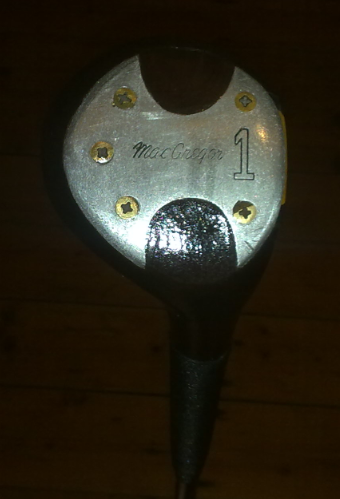 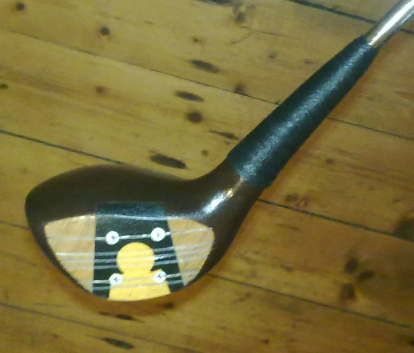 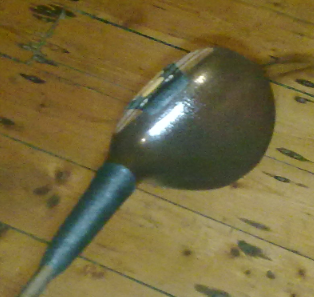 Macgregor M75W 3 wood.
V top Eye-O-Matic insert
Lie 51 degrees
Length 42 inches
Dead weight just under 14 ounces
Colour Black Opaque stain Semi Gloss
This is a real cracker imo. Perfect grain. The wood was so hard that the drill made a different noise when drilling into it. Looks like there has been some rebuilding done on the face (not by Me) towards the heel. 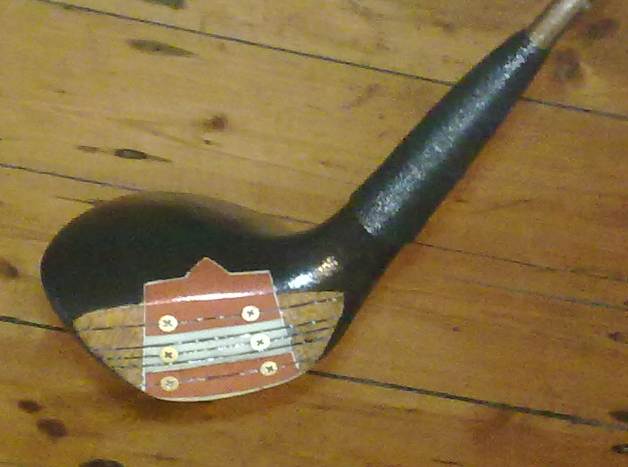 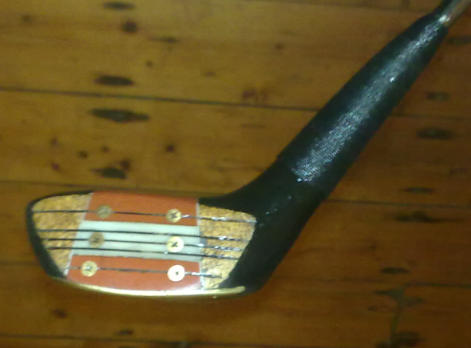 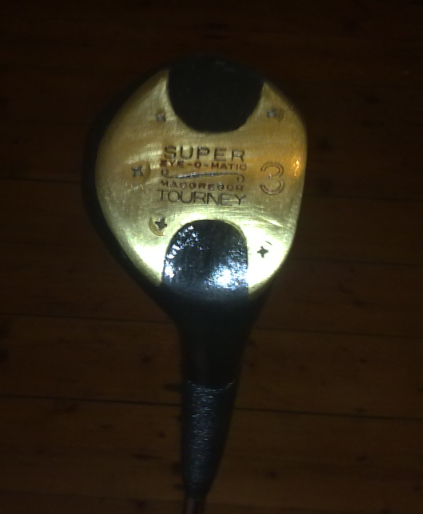 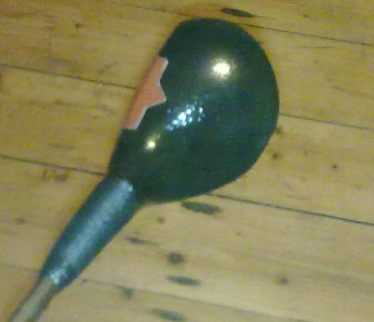 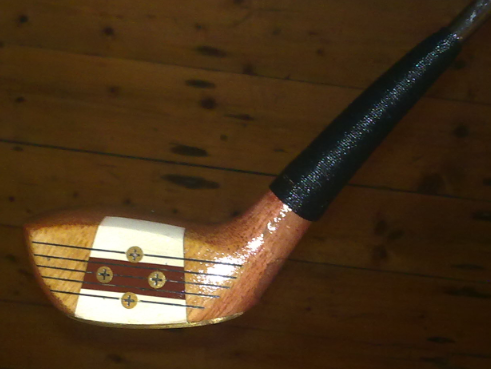 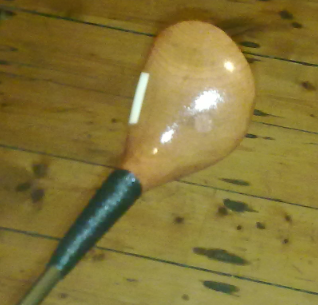 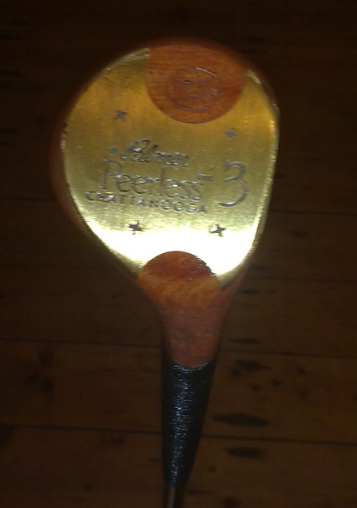 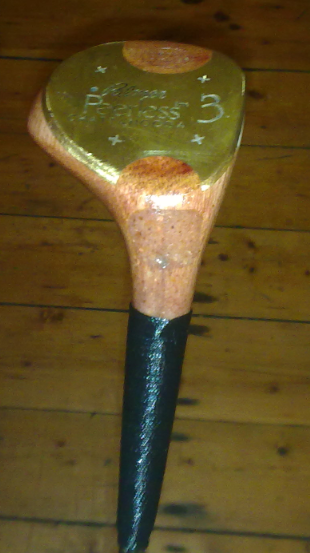 Great stuff…
Now I can say there is a company that makes flattened persimmons!
Changing golf swings one persimmon at a time!

Are they all the same lie angle? Roughly 48 degrees?

NRG
do you pin them after reshafting. I have used the same epoxy (brought at the same exact store as Lag’s) but have universally ended up with loosened shafts and had to try to pin them. In some of them I ended up just leaving the broken drill bit. I think Lag never hits the ground with his woods may be a reason.

Did you remember to file down or rough up the shafts with a file? You have to do this for the epoxy to hold. Epoxy doesn’t hold well on a polished stainless steel surface… you have to rough it up with the edge of a file. Then you glue it.

I did everything but nothing other than a pin or a broken drill bit worked. I even tried a 4500 PSI epoxy. I have been thinking about the filling of the head with the epoxy/saw dust mix we use to refill the hosel. When I redrill mine it comes out as long threads of rubbery material throught the grooves of the drill bit. How can you fill it up with some kind of cement that has more structure to it.

I’ve refinished and flattened 4 or 5 drivers now with no issues. I use Golfsmith’s 2-part epoxy (the 24 hour cure version) for both filling the bored out area prior to redrilling and for final bonding of the head. The redrilling produces powdery extracted material, not the rubbery strings you described.

It seems it may be harder to find now as the quickset “tour van” stuff seems to be more popular.

I don’t pin them.

I really do rough up the tip of the shaft as much as possible, remove all of the chrome. I use the square edge of the file to take small chunks out of the shaft at various angles so that the epoxy has something to stick to.

I now also form the neck area, from the heel to the ferrule area (or where the whipping would start from) at 4 1/2 inches, on my early efforts it was only 3 1/2 inches, so that should give some additional strength and SW as well.

I’ve started using a twine to do the whipping, (rather than the plastic type) which i find i can put on much tighter and I put it on while a coat of lacquer is a bit still tacky, then i apply more lacquer to the whipping once fitted, hopefully that to give it some more structure.

The 2 of mine that cracked weren’t a breakdown in the epoxy, but literally cracks in the wood. One after hitting thousands of range balls, the other after almost a full seasons play.

The prices are low for the artisanship and decisions NRG invested to achieve trusty finished products. If I could, I would grab that M85W driver and 3-wood in a heart beat because they are a steal, a great deal imho. I have an M85W driver with manufacturer’s standard lie that I like very much, but I wonder how much better it would serve me if the lie would be about 48 degrees. However, I do not have the required guts to lower the lie myself for fear of ruining the club.

Thanks for your kind words.

I don’t see how anyone can go through Lags course here without having all of their clubs set up really flat. If I were to try to hit a normal lie angle club now with my release, then I could only see it going way left. Now i am not saying that the driver has to be a Persimmon, (you may have seen that I have bent a metal driver flat too) but surely it does have to be flat.? I couldn’t imagine playing with some clubs flat and others standard, that would mess with my brain, but thats just me.

I had a student out here earlier this week, and he was hooking the ball, so I set him up with a set of flattened out irons, and immediately the hook was gone. However, he was still hooking his upright driver, so I handed him my flattened persimmon, and he would make the same swing and couldn’t hook it.

He had a very aggressive strong release, and rather than try to “fix” something in his swing, in this case he simply needed to have his gear match an already flat golf swing.

There have certainly been some great players who have used more upright gear… but I don’t see any advantages to it.
By flattening your lie angles, you move the left side “possibility” parameter vector more toward the target. It gives you the green light to strike harder with the hands and forearm rotation through impact which aids significantly if you are interested in holding shaft flex. It stabilizes low point with a flatter entry for crisper contact just like a high pitch in baseball. It naturally embraces a pivot driven golf swing and discourages independent arm action in the swing.

I was almost ready to post this to you, NRG, but then I saw that Lag reinforced your message. So it is both to you and to Lag.

I cannot resist your logic and will lay one of my persimmon MacGregor drivers on the sacrificial flattening chopping block, but not my small headed M85W that I mentioned. Instead it’s a MacGregor custom oil hardened persimmon numbered 0000/0000. It looks very much like a Super Eye-O-Matic M85W I have, but weighs less. It’s a good candidate to sacrifice if I do screw it up. If it turns out OK, I may not need to work on the small headed M85W, or I can delay it.

I may work on a Titleist 2-Wood or a MacGregor 3-wood at the same time.

I also wanted to provide a testimonial for the work that NRG does on flattening persimmons. I have 5 persimmons now that Neil has worked on for me: a set (1,3,5) of Maxfli Pro Specials from the 80’s and just last week I took delivery of a deep face Irving King Shreveport, LA 32B driver and a Nicklaus SEOM 5 wood. This afternoon I had my first chance to go out a play a few holes with them and even though there was frost on the ground and the main greens were closed I was excited to give them a try along with some flattened 1969 Dynapower “bulletbacks” that I had never had the chance to take out before (life is tough with 40 different vintage iron sets

!). I’m happy to say that I couldn’t have been more happy with the work that Neil has done. Both clubs were as solid as can be and the driver every bit as good as the wonderful Titleist that features in Lags persimmon flattening tutorial. Anyone who knows how attached I am to that club will know that is high praise indeed. So thank you Neil and I look forward to buying more clubs from you in the future. We are lucky to have you here in the UK.

P.S Thanks to Robbo also for tipping me off on the IK as a nice deep face choice. 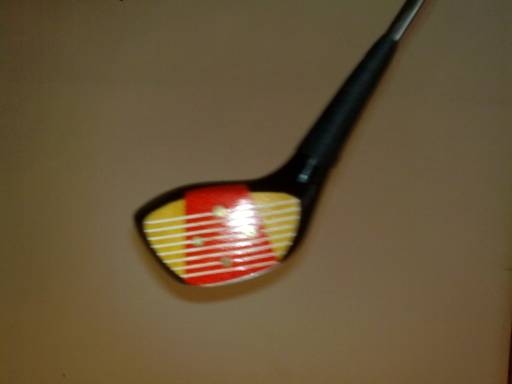 If the club has a pin, then draw a line down the shaft line through the middle of where the pin was and use that as a guide when drilling your hole. I set the club in the vice with this line is as close to vertical as possible, just seems easier that way. I also drill in a bit closer to the clubface than that line, that way you can sit the club just a little bit open.

I don’t want to get too sentimental here, but it does give me a great feeling knowing that you are out there playing with “my” clubs.

I look forward to alleviating your collection of classic blades some more in the future. Those MTs are my favourite blade by a mile.

Congratulations to… surprise, surprise… Addington Arnie on the acquisition of the Macgregor DX George Bayer Driver. (Arnie, you really should see someone about this problem you have collecting all these clubs). That is going to be a great training/practice club for you I think.

And great news too for me with these on the way. 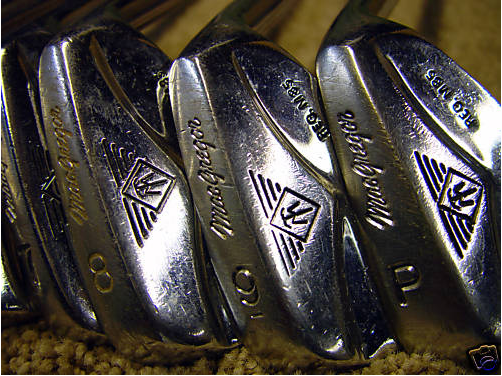 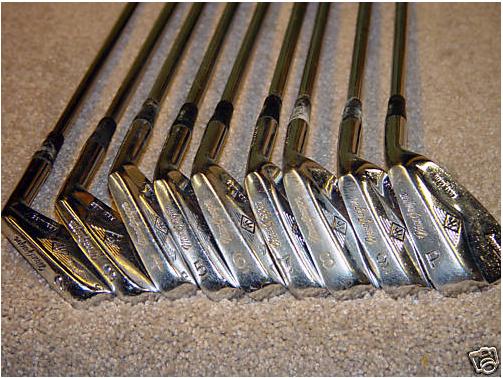 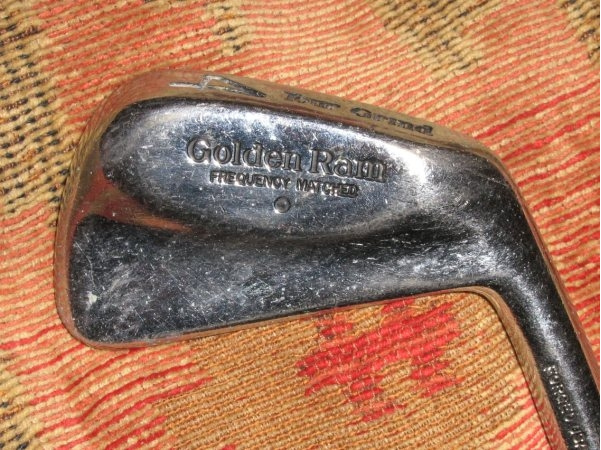 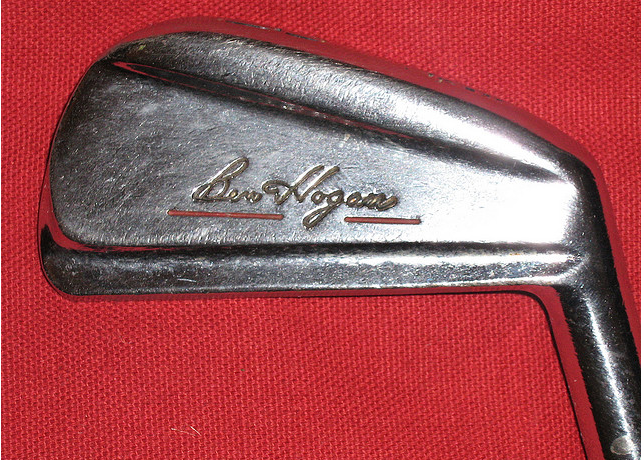 Those M85s and Golden Rams are going to be getting some dead weight added.

Thats my personal collection up to 16 sets of blades and 35 Persimmons now. If anyone else wants to trade some blades in the loft, for a flattened persimmon, then I am all ears.