I thought it might be interesting to list out some of the classic persimmon drivers of all time for those who play persimmon, are thinking of doing so or indeed for those who just like looking at the pics. I’m learning as I am going along and having a ball whilst doing it!

Today was a red letter day for me as my shipment from the US turned up containing a set of MacGregor Centennials which were made to celebrate the MacGregor centenary in 1997 and which contains reproductions of 4 of the most famous drivers MacGregor ever made:

The 693 - the original classic wood made between 1949 and 1952
The M85 - the first wood to feature the eye-o-matic fibre insert made between 1952 and 1957 - Freddie couples was winning with the original right up until the early 90’s
The M09 LFF - introduced in 1950 this is probably the most deep faced of the group and we all know that LFF stood for Let the F***** Fly!
The 945 - with a slightly more rounded toe and Jack Nicklaus patronage this is probably the member of the group with the most majors to its record

The package also contained an original refurbed M85 and a set of Cleveland Classic 10th Anniversary Woods (1, 3, 4). My thanks to Fred C in Mass for helping me pull these together, we had some fun tracking down these beauties! All are quite wonderful and I am feeling a little giddy this afternoon. Will post some pics when I work out how

So what other classic or modern persimmons should I keep my eye out for in the future?

Here are some pics of the Cleveland Classic 10th Anniversary woods - S300U shafts and tour wraps - I hit some balatas with these today and they felt just great! 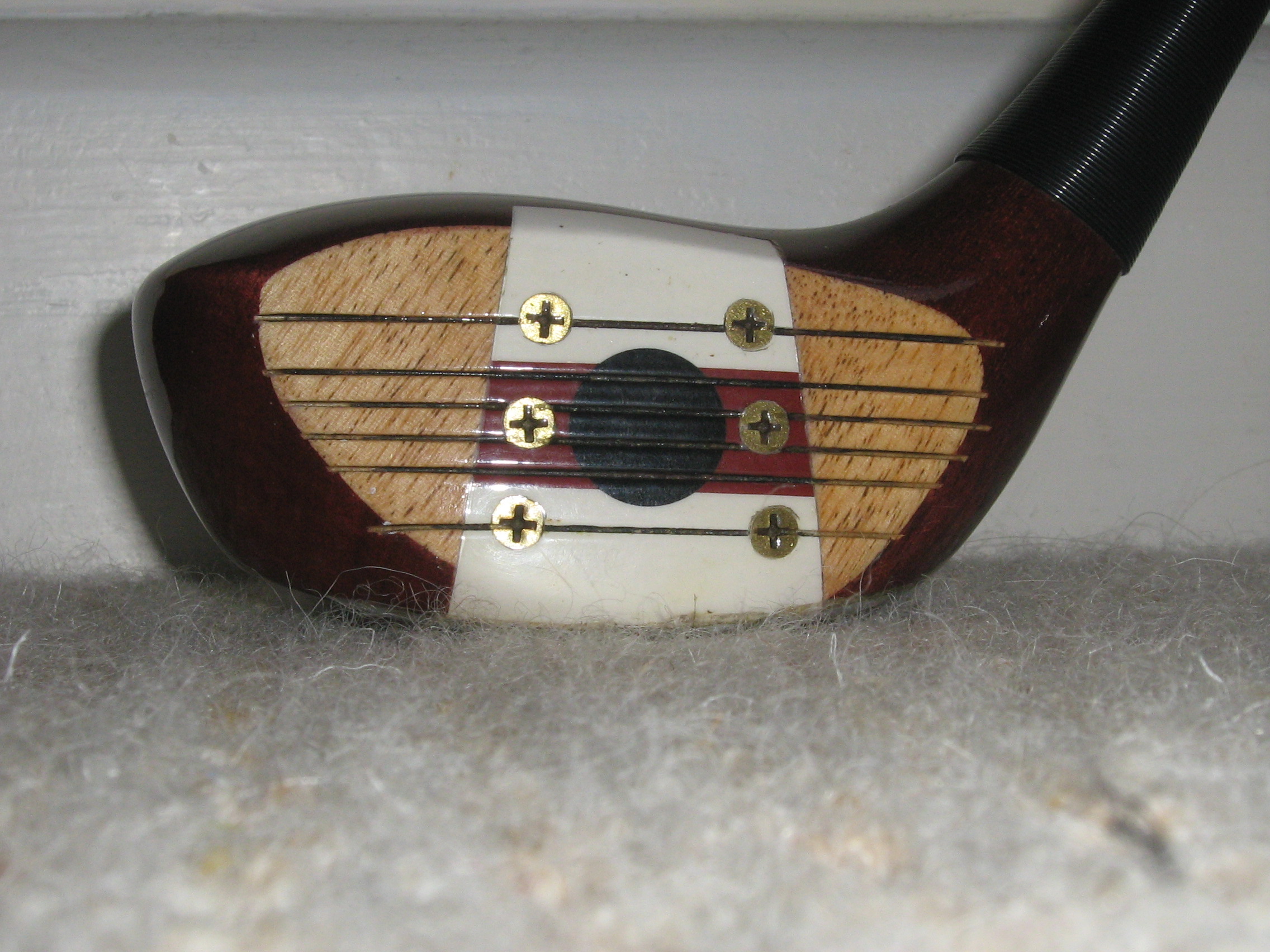 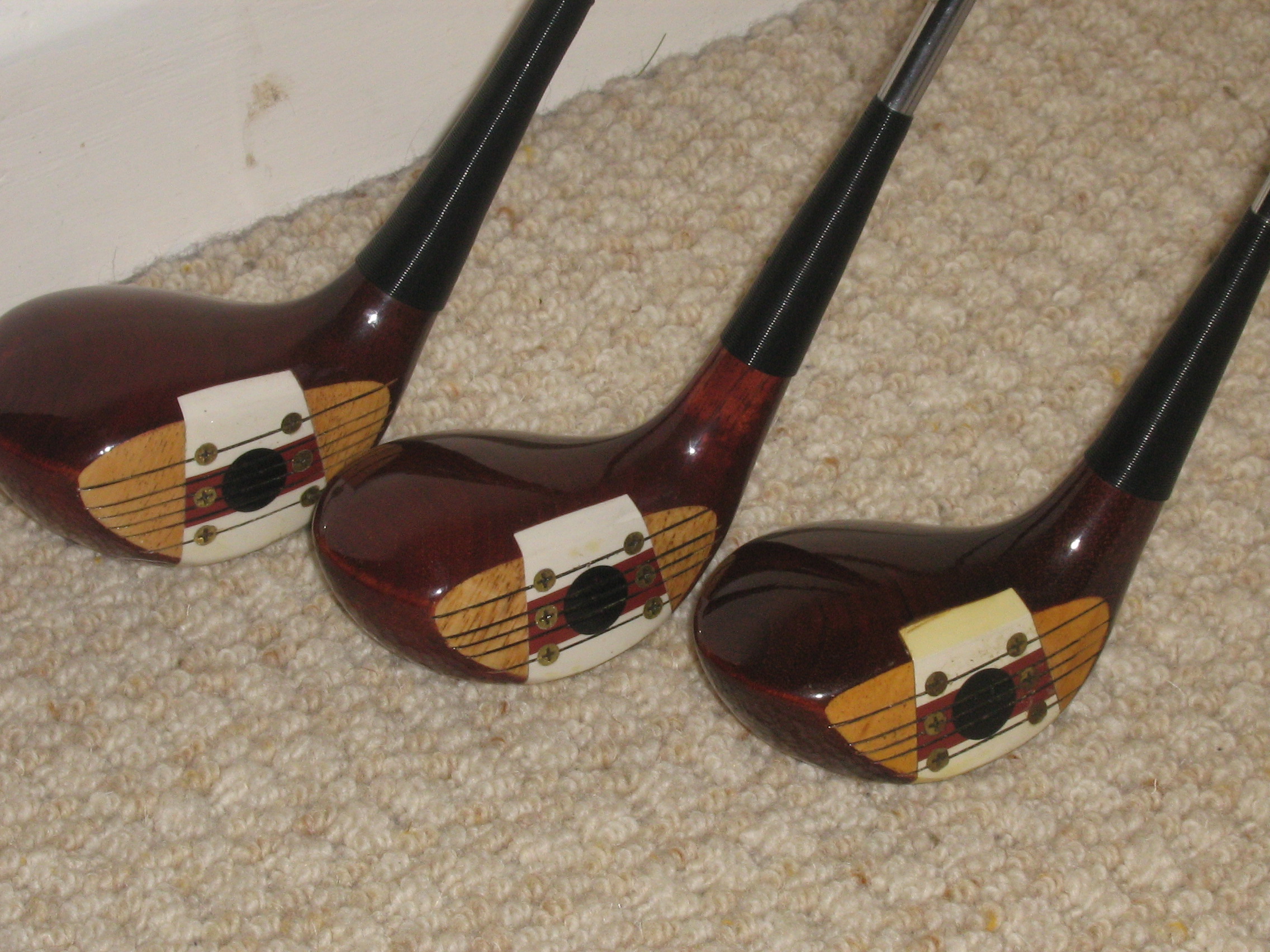 here are a few of my beauties!

I got myself an old Spalding Straight flight 1 and 3 wood and Wilson Jerry Pate Driver thinking they were persimmons. The spalding someone told me are actually a kind of a polymer and not true wood and the Wilson is a laminate wood. Does it make any difference if they are not true persimmon woods.

macs,
I don’t know about polymer but laminated woods deteriorate much quicker. they are not ONE solid block shaped into one unit like persimmon- they are many layers basically glued together- so you can see the quality and life span of laminated woods would be not so long on the whole.
As far as a hit- they play similar, but they make a different sound because of the formation- layered versus whole.
From my past experience laminated woods tended to chip away around the outside of inlay/insert area after a lot of hits (or mishits!!!)

The original velocitized on the left, late 70’s remake on the right…
both are great clubs…

Of course, back then, everyone wanted the original! Who can complain now though!

I have just retrieved my old Cobra blades and beloved Cobra driver from a mate’s garage and will launch an assault post some re gripping.

Think I bought them second hand in the late 80’s or early 90’s but can’t find any information on when they were first released.

Hope someone can help. 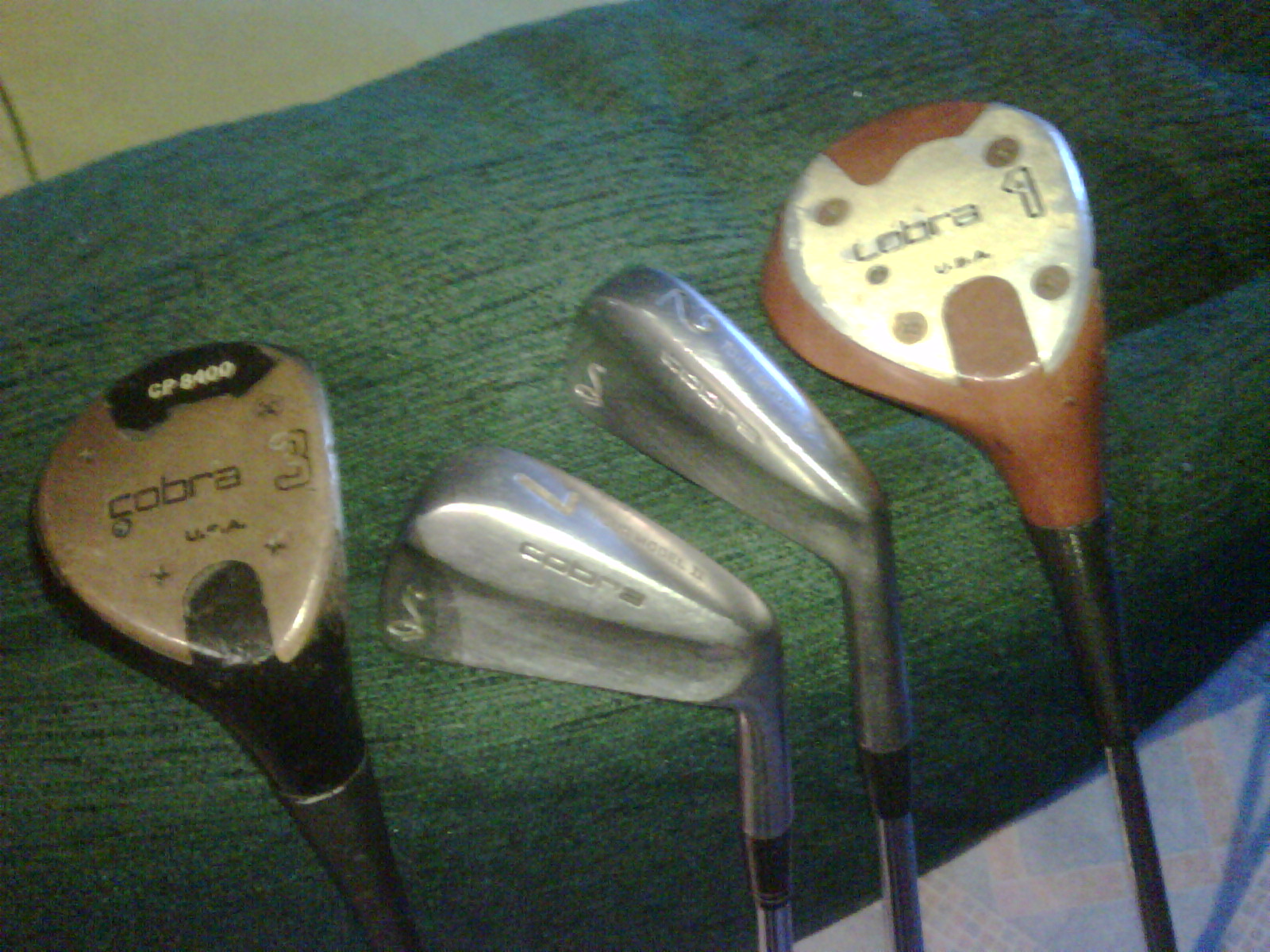 According to ironfinder.com, these are from 1982-1984. Look unlike anything else they did in recent history.

Thanks Bagger, that’s definitely them.

Found this quote from Mitch Voges mentioning the gamma fire inserts introduced into the persimmon game way back in the 70’s.
They are hard to find these days, but the concept back then was to have the hardest insert possible. The gamma’s where the answer.

A lifelong garage tinkerer, Voges always was fascinated by the idea of marrying high-tech fitting and instruction. After winning the Amateur, he was the elder statesman on the 1991 Walker Cup team, which included collegians Phil Mickelson and David Duval. (Voges taught some of the younger players how to tie their ties.) Before the matches, he cornered then-USGA technical director Frank Thomas and asked, “What’s better for players—Cycolac or gamma-fire inserts? Surlyn, lithium or balata balls? And what kind of shaft?

I’ll get some better pics of it up soon…

I can’t believe I finally located a Wood Bros driver on ebay!!

A nice blondie, 10 degrees of loft, with an X100 in it. It’s in fantastic shape. The lacquer on the insert is showing some wear, but that’s the only place on the whole head. Definitely looks like “a player” had used it with a tight wear pattern. 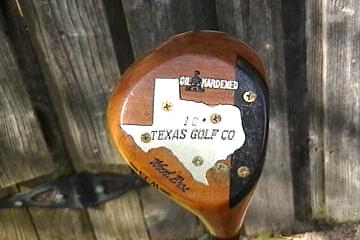 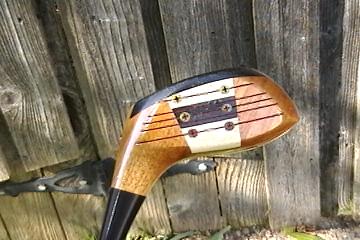 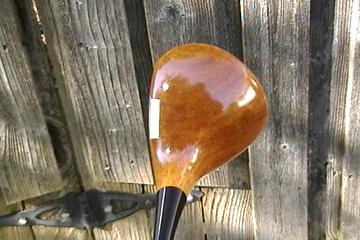 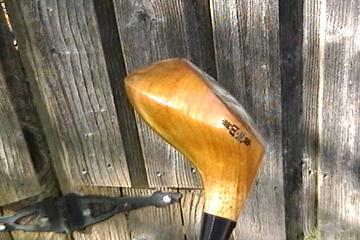 I should have known that if someone else here was going to manage to locate a “WB” on the net it would be you!

Can’t wait to hear about it and see some pics! Hit a few balls tonite with mine and it’s a winner. Love the X100 in it too. Makes me wish some of my Hogan persimmons had the Apex 5 in them.

Keep us posted on that WB,

For that reason Hogan was big on stiff shafts. He felt the looser shafts would be much more likely to fail you under pressure.
I know if I go out with a driver with even an S300, left is much more an option on the course than if I have a tipped X shaft.

Just noticed that there is another wood bros driver for sale on ebay at the moment. A special “Masters” version:
LINK TO THE EBAY PAGE

I see more persimmon drivers showing up on ebay at the moment again (there was a great McG Toney Penna driver for sale last week, went for < $50, and now there’s a McG M09T LFF for sale too). End of the season is approaching i guess. People are cleaning up their garages and sheds.

Thanks 88245. I was lucky to stumble across it, and although there were a couple of pics of it I fully expected to see something cosmetically wrong when I received it. But for that price and the fact that I was getting it for play and not for putting it on a wall, it was worth the $30 just to see.

I was talking with someone who used to work with one of the Wood brothers and he said that at some point they moved the production to Japan. The “pre-move” drivers are apparently more valuable. Not sure how to tell the difference.

Looks like you got a much better deal on the Seve persimmons you just got last week Arnie.
These ones start at 1500 pounds!!

Looks like you got a much better deal on the Seve persimmons you just got last week Arnie.
These ones start at 1500 pounds!!

Yeah I saw those ones on ebay…and had a laugh

The ones I bought are very slightly different as they have the limited edition no: 232/999 on the sole and 4 rather than 2 screws on the face I think. Personally I think mine are far more valuable having been crafted by the famous Dave Ballester himself… 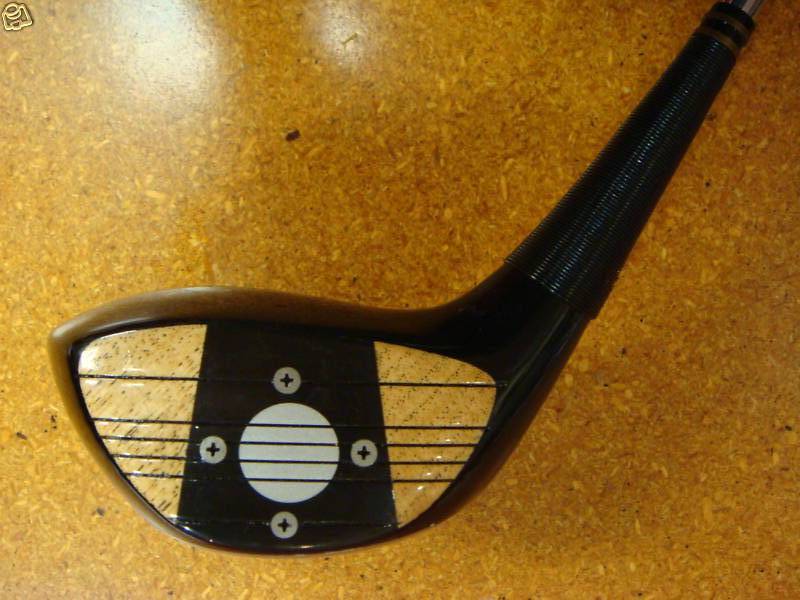 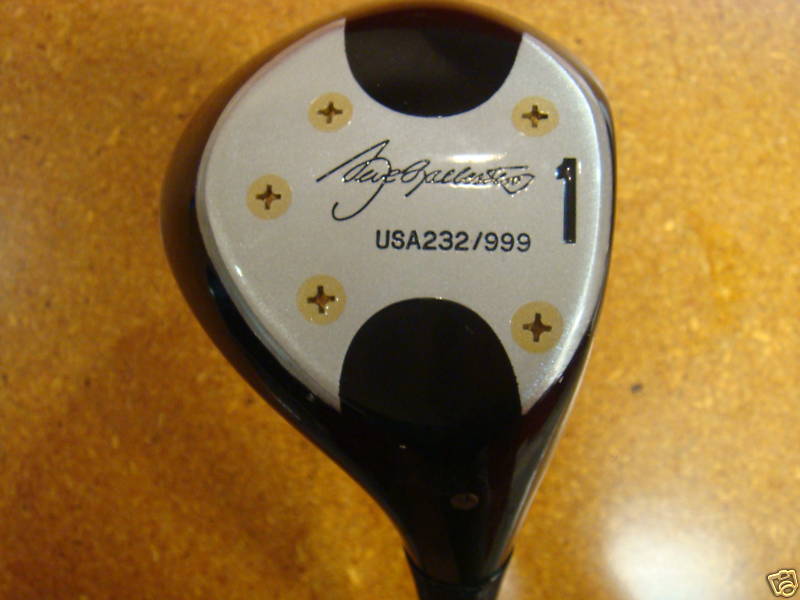 Aiguille will be getting this legendary block. I started with a really pure classic 1950’s MacGregor M85 persimmon block, (look at the perfect grain on this one)
pulled the old shaft, filled the old hole, then re drilled a new one at 45 degrees…dropped in an a tipped X100 (1 inch tip) Reformed the new neck,
epoxied it in, re set the lie as well. Grinded it down to 9 degrees. Refinished it, then re whipped it, and re gripped it…

But this thing is PUUUURRE…