This is my first post though have come across ABS many times with great discussions and info.

Was wondering if anyone knows anything about reshafting these irons?
Ive read that some Walter Hagen models had an unusual tip size, taper but smaller than standard.
Any help would be much appreciated.
Thanks

I have a set of 73 haig ultras and the shafts are a nightmare to get out. I have read Maltby say they were threaded. At least they aren’t pinned. I haven’t successfully removed any yet. I wasn’t planning on reshafting them, but the 7 iron shaft broke off in the hosel, so I need to redo all of them.

I removed some shafts fom Macgregor VIP Limited split soles a while back and they seamed to have a kind of thread down the hosel. Not sure of this is the same thing.

It took a lot of heating before I could twist them out (though Im no expert). Wouldnt like to heat the Haig Ultra’s for too long in case the plugs melted.

Hopefully someone else will have some more experience of this and the shaft tip size.

I’ve got a set of 1970 Haig Ultras and I tried to reshaft them (they were 1 inch shorter than “standard”) so I thought, no big deal, just replace them with newer stiffer shafts and all will be good. I took the 7 Iron first and had a hell of a time getting the shaft out. Add in the rubber insert that makes it look like a borethru and it really is a pain. After heating and heating I couldn’t get it off. I just burned alot of the rubber insert. I ended up cutting the shaft down to about 3 inches from the hosel, clamping it to a vise while crushing the shaft flat and then twisting and pulling until I finally got it off.

Come to find out it has a “unique” taper size smaller than the standard taperered shafts. You will need to either taper bore them or bore them for a parallel shaft if you want to use a newer shaft. I had heard that Wilson had special sized shafts for the Haig Ultras and it is true. I don’t know where you would find the rubber inserts to replace them with.

Needless to say, I didn’t do the other shafts and now have a 7Iron head than needs to be bored and reshafted. Might just find a replacement 7iron and just call it quits. It’s not like I have never reshafted/built sets of clubs before either. I have probably built 6 sets from scratch and reshafted 4 sets with newer shafts.

If I knew then what I knew now, I never would of touched them other than maybe putting in shaft extenders.

My advice, leave well enough alone when it comes to the Haigs. Just play them as is.

Yes, many of them are threaded. Often they can be screwed off. Some of the old Spalding’s the same thing.
Lesson learned… look for the ones with the red bands on the shafts… those will be stock stiff…(X really by today’s standards)
Some of the earlier ones will be heavy enough, and my 62’s came stock with no offset, and pretty flat also… didn’t need to do much to them.

One way to get a stubborn shaft is to cut it flush with the hosel and then use a Tap set to go through the the bore thus eliminating the left over shaft piece by piece. best to with two step taps (makes it easier). Lots of elbow greese but wont wreck the club head.

wow, not an easy task by the sounds of things.

Was thinking perhaps removing the shafts with a fair amount of heat and then re-filling the plug holes with some other material such as epoxy - not sure if the bore goes all the way through though?

Re-boring for the standard shafts also sounds like a headache so may just leave alone as recommended.

Thanks fo the advice

Those old shafts weren’t designed to come out and at least a couple in the set always seem to be a nightmare to get out, sometimes the rust themselves in. Best left and find a set that already have stiff shafts imo, easier/cheaper in the long run.

Am pretty sure the bore will go all the way through, but it will step down at the end of the old shaft. Reboring for parallel shafts will require a pillar drill.

Was thinking perhaps removing the shafts with a fair amount of heat and then re-filling the plug holes with some other material such as epoxy - not sure if the bore goes all the way through though?

Yep, the bore does go through all the way through but it is smaller than the hosel hole. Mine are the 1970 Haig Ultras. I assume yours will be similar. The shaft bottoms out on a circular edge then the smaller bore goes down from there. I think the idea was to take weight away from the hosel and allow the COG to be closer to the middle of the face. The older irons tend to have heavier/longer hosels so the sweetspot tends to be towards the heel. Technology ahead of it’s time maybe?

You may need to put something down the bore/hosel to plug it before the expoxy can go in. Otherwise it would just drip down the shaft.

But yes, it will probably take more time/tooling to do a good job of it than it would be to just get another set with your specs.

BTW, I do love how those Haigs look and play. I wanted to make them my classic club gamers but being an inch short of “standard” made me want to reshaft them. What a mistake. At least I only pulled one shaft (7Iron) after a major struggle. I’m going to try to bore it to parallel and get it to standard length. I’ll add extensions to the others and have a complete set to play (2-PW).

Good luck with the 7 Iron. My set need stiffer shafts so will probably take a chance on the adjustments since they cost next to nothing on ebay.

I also really like the look of the club heads, very similar in appearance to Hogan Apex II’s though obviously released several years earlier…

Indeed they are beautiful. When you hear the word muscle back, they sure live up to their name. The designer came up with some sweet looking clubs that’s for sure. Nowadays, things are plastic injected cavity backs with clunky head shapes. I don’t know how anyone can setup to them let alone hit them. So offset, oversized, thick toplines with hosels that stick out like a sore thumb. A good tool is clean, simple and effective.

I also have a set of Hogan 1977-78 Apex blades. Also a great set. Blade on blade technology. They are a little lighter than the Haigs but still play great. No wonder Mizuno copies the Hogan blades of yesteryear. Classic never goes outta style.

yep, couldnt agree more, the latest ‘cavity bricks’ are beyond belief. Its almost painful looking in some new golf equipment stores these days.

I’ll take classic blades any day. Clubs once played by some of the greats of the game can be picked up for next to nothing.

Ive included a picture which shows the shaft, it has a .355 taper tip but there is an extra step on the end with another 14-15mm’s that fits into the bore. One of the plugs was slightly warped due to heat transfer but looks OK.

Anyway, hope this helps someone else. 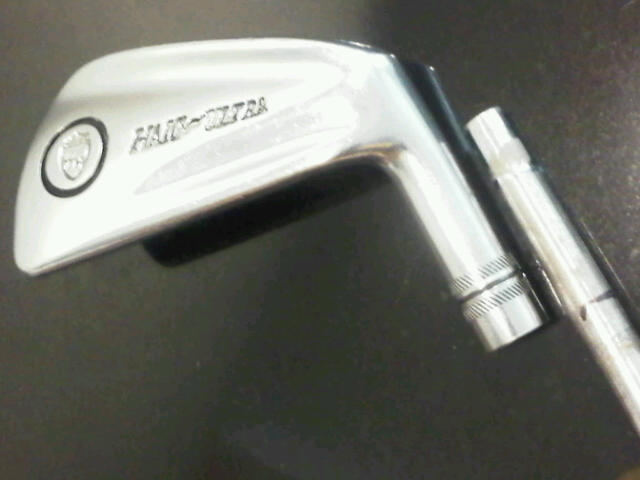 Ive included a picture which shows the shaft, it has a .355 taper tip but there is an extra step on the end with another 14-15mm’s that fits into the bore. One of the plugs was slightly warped due to heat transfer but looks OK.

Anyway, hope this helps someone else.

What kind of shaft remover tool? I might go give mine another try…

Sorry, actually it was an extractor ‘machine’ not really a tool as such. The model was a Weiss-Gibson Ultimate Extractor - I went back and took this picture.

Presumably equal force needs to be applied with the design of the Haig shafts. 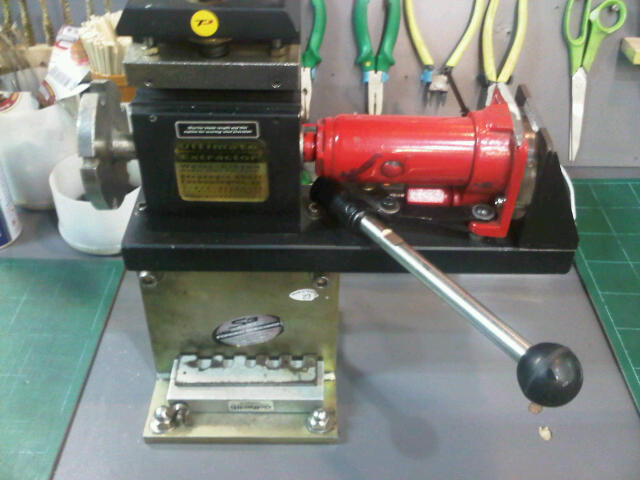 I successfully got all mine pulled this evening. The rubber plugs were shot though.

These were the most stubborn set I’ve ever done, but they’re such beautiful heads I am glad to have them ready for new shafts.

So what are you going to do about that last 14-15mm’s? Just not put it down that low with a new tapered shaft?

are all haigs a pain in the arse?

I would love to find a set and put new shafts in but i don’t like messing with too much more than pins ala early hogan and macs.

i had a real nice set from the 70s that i got rid of years ago. if i knew then what i know now. ditto my 88 redlines that i had
in college…

i am a stupid

So far, they have been the most pain in the butt clubs to work on and I have built/reshafted about a dozen sets over the years. Odd tapered shafts with rubber hosel plugs (they are not bore thru).

If you can find them with the stiffness you want and don’t mind adding shaft extensions to get the length you need, they are some mighty pretty clubs. They hit well too! I started reshafting my set but after a major ordeal just getting the shaft outta my 7 iron, I stopped. I’ll finish the 7Iron but am going to leave the others alone. Maybe add shaft extensions.

I guess this goes with the thinking of other ABS club setups. Get what you want in the set you buy rather than getting close to what you want and spending the time/effort tweaking it.

I reshafted my Hogan Apex irons and the pin was no problem (I got a set of pin punches). Just standard tapered shafts to replace them with. Paid about $18 for the clubs at Goodwill and about $110 for the DG shafts and about $50 for new grips. Spent less than $200 for a great set. Add in my time and tools and it’s a bit more but it was a labor of love so I don’t count that. I don’t do this for a living.