One of the secrets in the dirt beyond divots, ground pressures, hard work and determination is the fact that we have two things in ‘the dirt’- literally our feet.

Interesting look perhaps for some relative to the workings of the feet and legs while walking, and putting on the abstract cap for a moment, when Lag talks about heel heavy first, what hits first when walking…hmmmm…the heel then toe. Then the heel accelerates, are we talking the foot heel, or the club head heel. Of course there is no turning aspect to this, but the principle holds.

Starts to make sense when finding out that when walking we are actually falling forward. 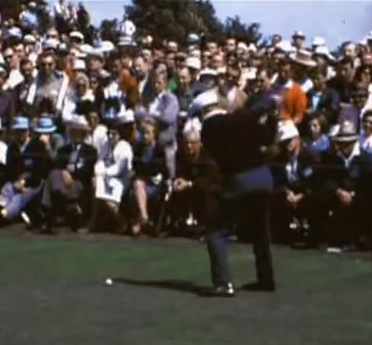 Check out the 2 minute mark:

BTW, did you see my Petty post over on the DIRT. I thought I was a stroke of genius. LOL

That swing at about the 7:00 mark - the one that is shown for seveal minutes - is interesting to me with respect to his stance and the flight of the ball. Player is addressing the ball with a slightly closed stance, yet hits a low fade.
Also, the point made about balance at the end of the swing (or lack thereof) resonates.

If you look at many of the persimmon and steel era players they setup with closed feet, at least with the longer clubs…Hogan, Sneed, Player, Palmer…to name a few. In a pivot driven swing the feet will have no determination on shot shape, and they used the closed stance, I think, to allow for more range of motion in the BS so they would spend their pivot too soon on the DS. Today they like to set up square, turn the hips very little, spin the hips and then throw the arms because they have expended the pivot too soon. These old guys knew what they were doing!

When explained in that way, this makes perfect sense.
In fact, I need some help with the BS turn, so I’m going to experiment with that a little. Explains why with a slightly open stance I may not turn adequately on the BS.
I feel like I can make an adequate pivot on DS even within a sli closed setup, but not adequate turn on the BS with that setup.
Thank you.
Of course I imagine with the shorter clubs, this doesn’t apply as much if at all.

I think it is self evident, but I meant to say the old guys turned more freely on the BS so they would NOT expend their pivot too soon.

BTW, did you see my Petty post over on the DIRT. I thought I was a stroke of genius. LOL

I did and it was…nice disc jockey work Johnny Fever.

Interesting that Defransesco comments about Player ‘walking down the street’…I don’t really watch Wayne’s stuff: talks too slow, and long, with too many lines for me, and my ADD kicks in and I tune out, but thanks for narrowing it down to that part of the tape…good stuff…and from Ben:

The back, let me repeat, remains as naturally erect as it is when you are walking down a fairway.