After completing the Cleveland 4-wood and getting a chance to play a couple of rounds with it (it’s a keeper for sure) I decided to tackle a 3 wood next. I didn’t quite get the 4-wood as flat as I wanted, but I managed to get this 3w set up at about 45 or 46 degrees. Although the pin on this one popped out as I drilled thru it I had a heck of a time getting the remaining piece of it punched thru so the shaft would “release”. I finally got the head off but it was very uncooperative.

This is a Tommy Armour I’ve had since the 80’s. It was in decent shape but had a couple of nicks the result of some clumsy footwork while wearing steel spikes back in “the day”. It had that typical reddish tudor finish (like the driver that Lag uses in his manual) which I sanded totally off. I like the natural look of the wood and will simply finish this in a clear coat with no stain.

Here are some in-process pics:

Robbo
How do you make the plate all shiny and new.

Robbo
How do you make the plate all shiny and new.

I hope it plays as well as it looks Robbo because it looks sensational!

Thanks Arnie. I had an opportunity to hit some range balls last night and it performs very well on center face hits (no surprise there), but it’s much lighter than I want (C7/C8 and about 390 grams) so I have some work to do. Not sure if the X100 is that much heavier or if I could have sanded that much headweight off. I haven’t tried removing the soleplate off any persimmons yet but I’m going to have to learn how. I suspect some heat will be involved.

I was wondering how headlight these things would get with all that wood taken out, keep in mind the ‘playing swingweight’ will be even less than the balance scale shows because of the additional mass under the whipping which doesn’t transfer behind the ball.

Removing soleplates without a hot tipped driver is tricky. First of all it will obviosly have to be resanded and clearcoated afterward. You have to secure it in a vice in a way that doesn’t damage the wood yet is secure enough to unscrew the plate without stripping the wood or the countersinks, stripping or cracking here is pretty much the death of the club. Then you have to heat the end of a philips driver to melt through the clearcoat. Remove all the screws before popping the clearcoat, again to avoid stripping. Work the plate off slowly from both sides and there will be a hole in the middle of the wood for weight rings. Hopefully the new shaft isn’t in this space, watching the how-to, I saw the new shaft gets dangerously close to it. If I were to do one of these projects I WOULD REMOVE THE PLATE BEFORE I DRILL to keep the shaft out of the space and away from the soleplate. Now if everything is ok measure the space, usually it’s about a inch and get some washers or spacers to snugly fit. You can buy weight rings from Maltby or another golf repair co but regular thick spacers from the hardware store work fine. With the plate off put the club on the balance scale and then insert one spacer to figure how many swingweights it’s worth and then add as many as you need to get the finished swingweight you want. EVERY SINGLE SPACER HAS TO BE EPOXIED INDIVIDUALLY AND IT HAS TO COMPLETELY SET OVERNIGHT BEFORE REATTACHING THE SOLEPLATE. If anything comes loose it has to be done over from scratch as the spacers are no longer part of the clubhead and are floating in space during the golf swing not doing anything but rattling around.

After you’re satisfied that everything is perfect screw the soleplate back on. I always like to brush a little epoxy around the threads of the screws so that it’s really stable and permanent, also I don’t have to screw them in so tight it begins to strip the holes, just get them dead flush with the plate. You can also epoxy the plate to the wood if you want, I usually don’t unless the wood is really old or beginning to crack underneath. Leet the screws set and then do the varnish or clearcoat and finish the rest up.

You can also simply drill into the back of the club and melt in a couple old fishing weights… then fill in with a bit of epoxy.
I brought my Hogan driver up to 14.5 ounces and a D-7 swing weight.

After playing around with the Wilson Laminate Jerry Pate driver I am on a roll. These titliest are my next project. I think they dont even need any sanding. May I will give the driver face a little fine rub and clear coat. You can even save the whipping if you dont have any. 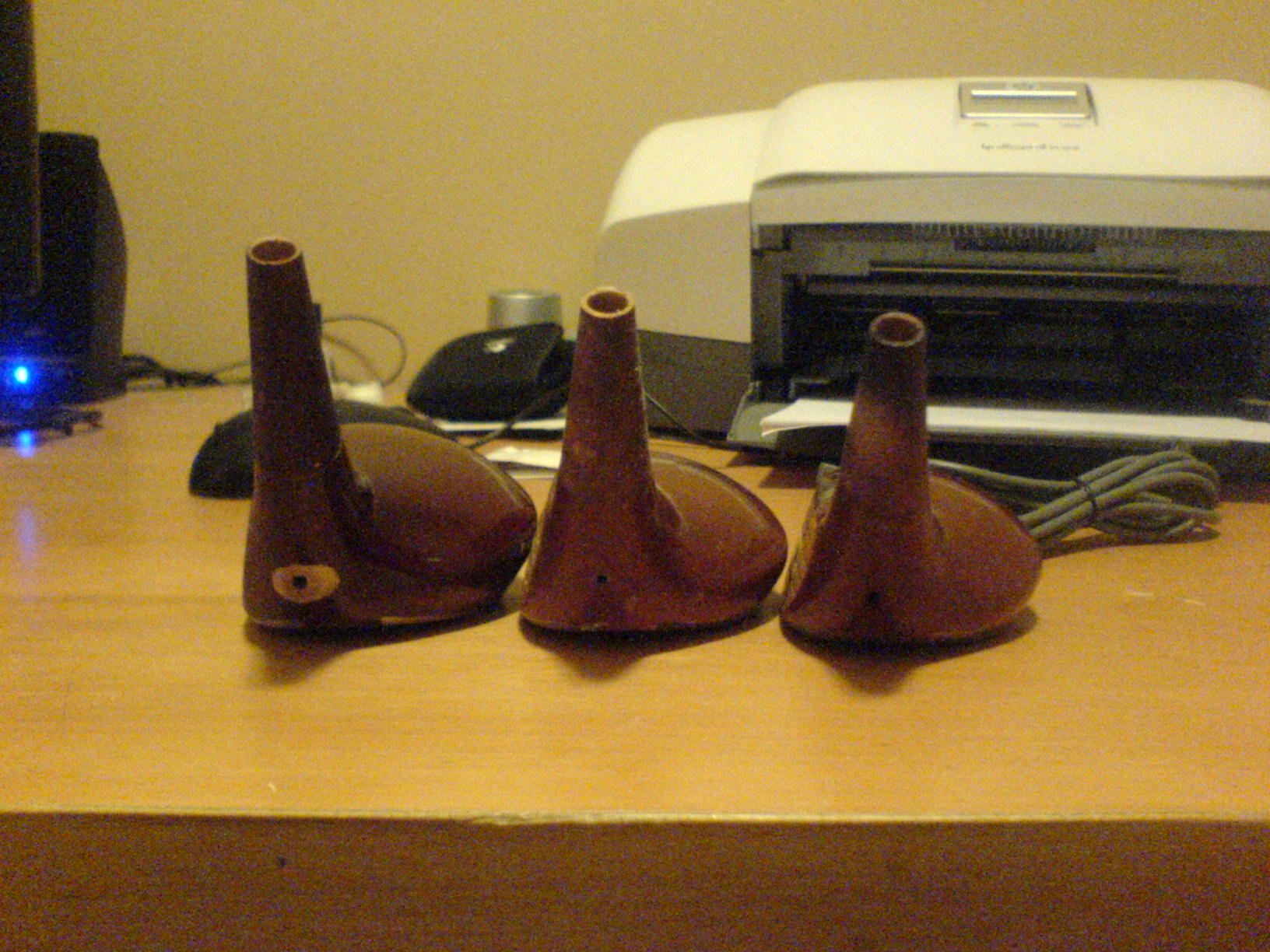 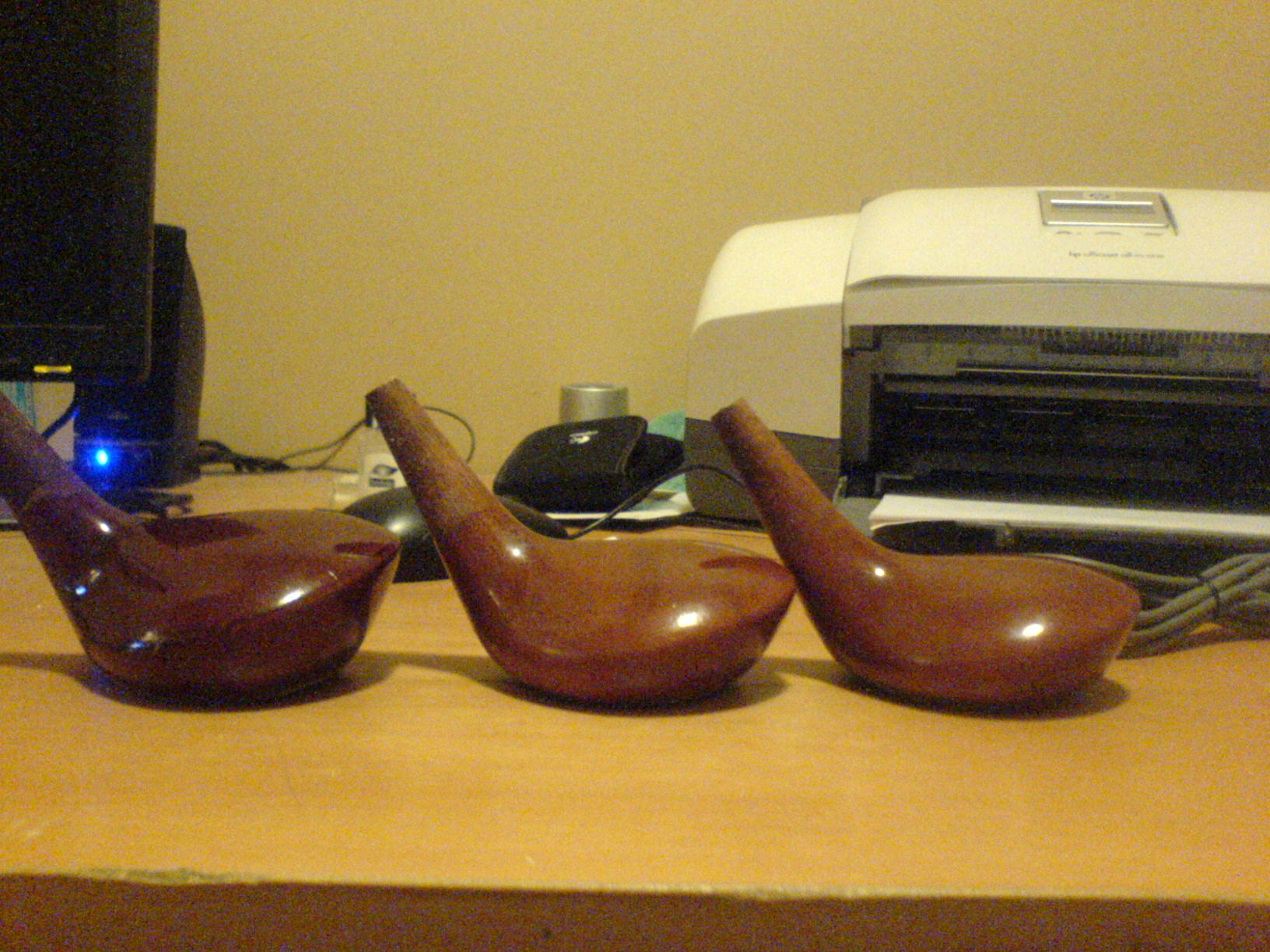 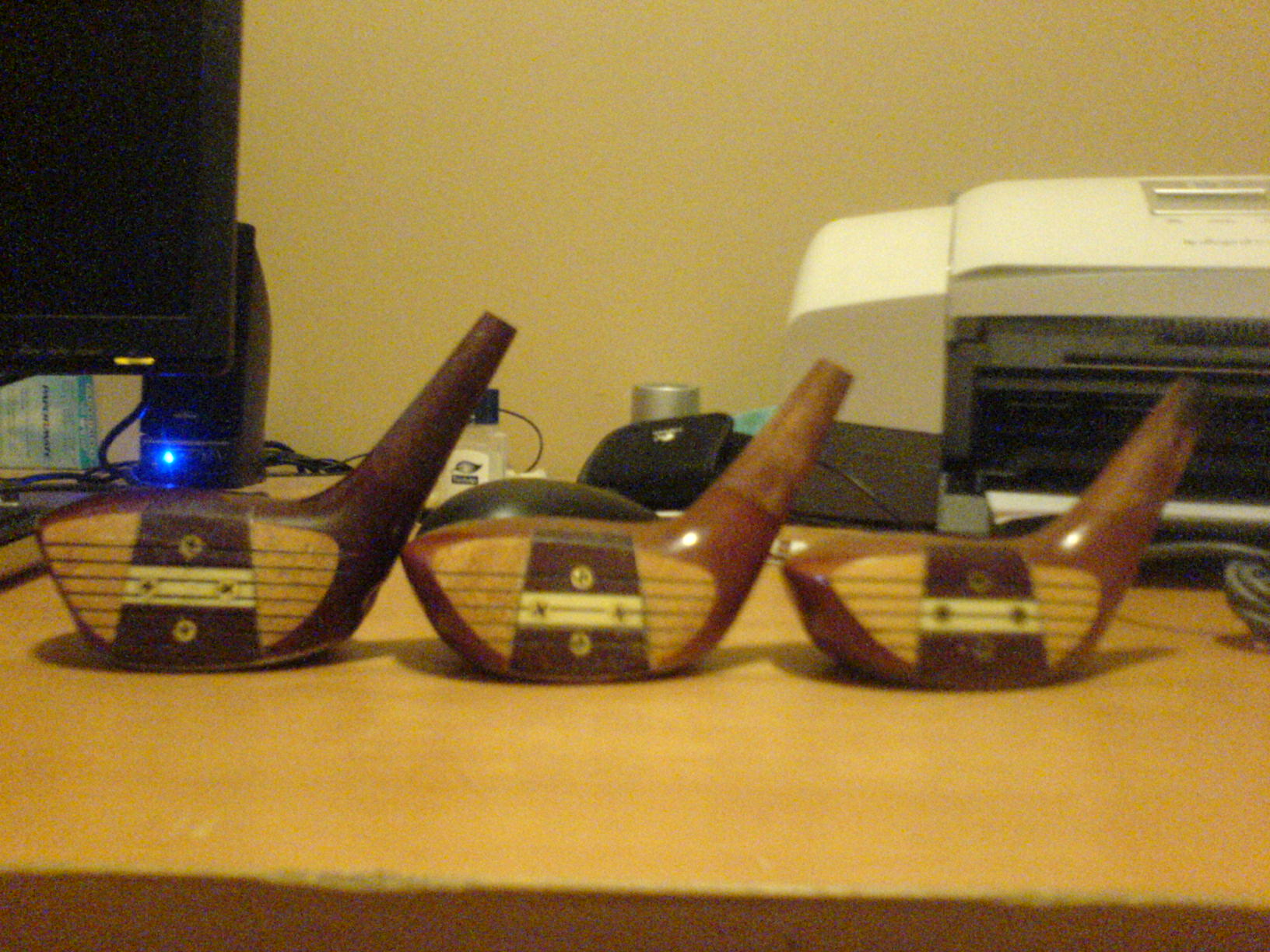 Have you found yourself doing a mini victory dance when you get those pins to pop out like they’re supposed to?

Robbo
I didnt do a dance but it was so addictive I went on to unshaft 10 more woods (including some stupic laminates). Our garage is darn cold during the winter and I wanted to finish the hard part before the wife comes back. So now I can take it easy and work with one head at a time. My assembled wilson has dried now. I have a little protractor but I think one good way is to take a picture and then drae a rectangle along the shaft in MS Paint. If it looks like a square the angle is close to 45’ (see picture). 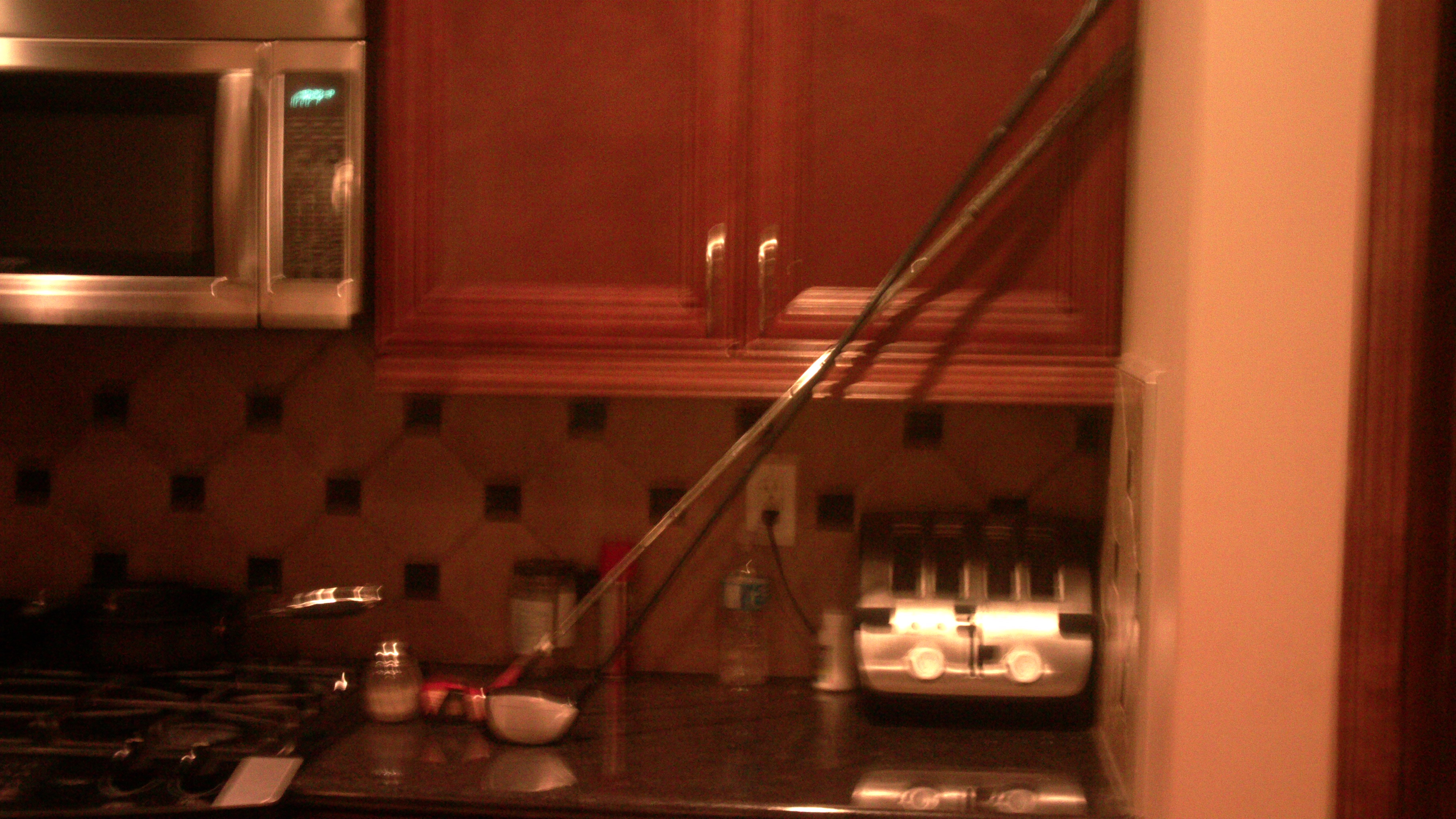 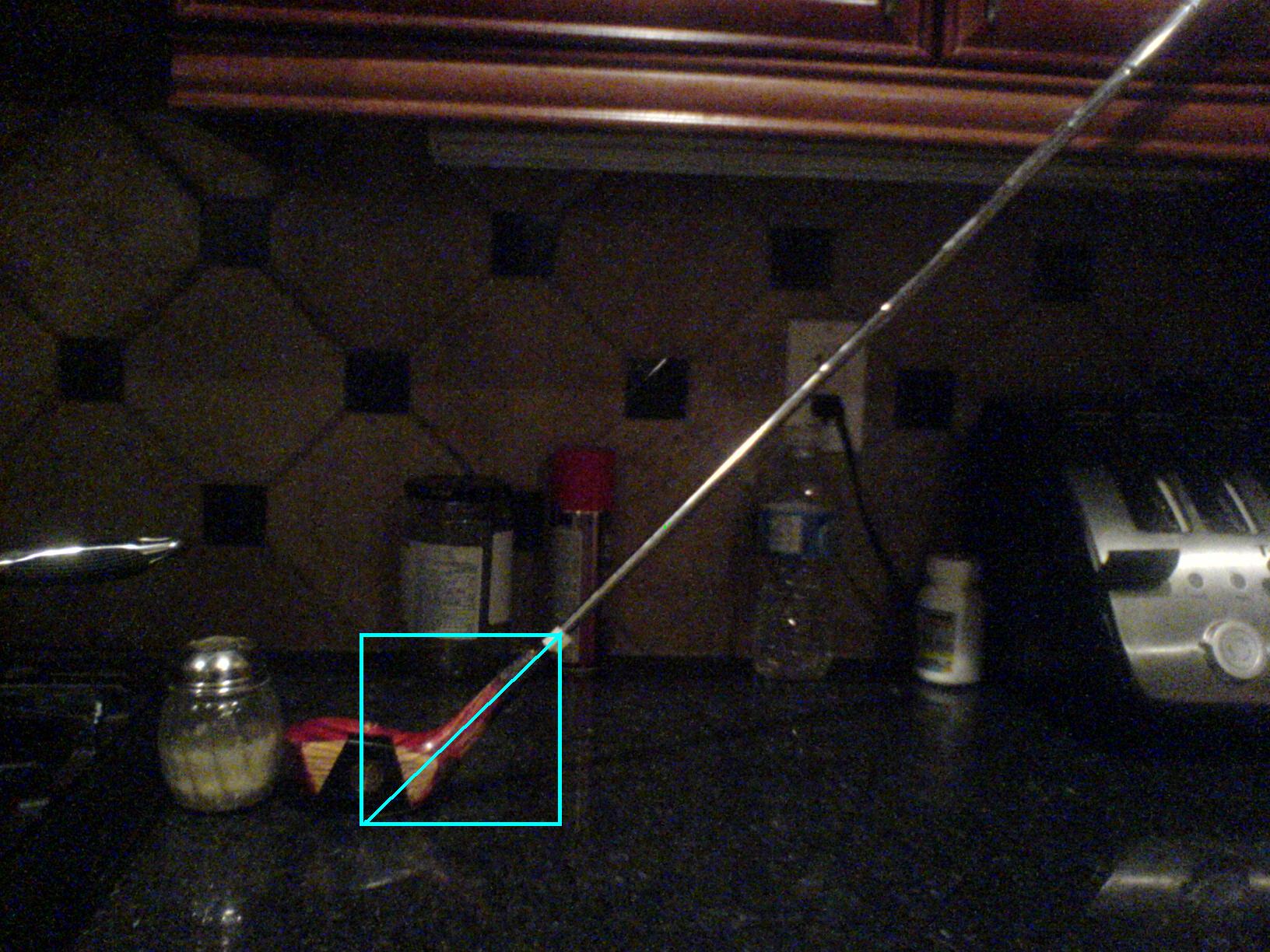 I have one of the old magnetic base lie angle protractors from Gsmith so I can lay that on the shaft and get a decent read.
I suspect that once you’ve done 4 or 5 of these you’ll be able to eyeball it to the degree!

The wall tiles in the back tell the whole story…

“Golf should be played from a 45 degree angle”

Managed to flatten the driver to complement the 3-wood. This baby is flat - in the 45 degree range:

Also took Lag’s suggestion of back-weighting the 3-wood. Drilled a 3/8" diameter hole in the back, added some tungsten powder and epoxied it in place. Get’s it up to D2-D3 and 14 ounces overall:

I’m bout 4 years behind a lot of ABS-ers but wondering if Laminates can be done or Womens Persimmons as they seem more available and sometimes are in better condition…?