So, I have been on Module 1 for about 3 1/2 weeks now. Avereging 150 reps a day each hand, and then 150 with both hands. Had several lightbulb moments, and really enjoying the process. The weather was unseasonably comfortable here in Texas this week, so this evening, my dad and I went out to play 9 holes on my home course…here’s the scorecard. 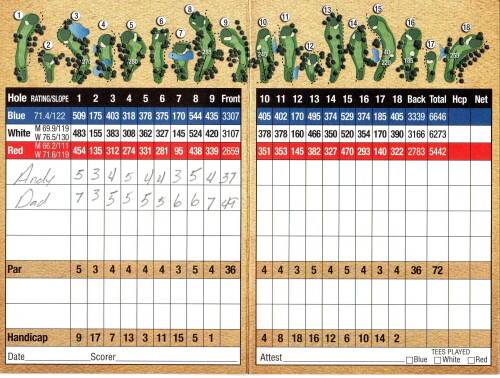 I hit 8 out of 9 GIR…lowest score I have ever shot…ever. Had 6 putts for birdie all between 6-10 feet. One was a little hot, went in and bounced out…the others missed by mere inches. The potential was there to sheet even par or a few under. A little background about me; I started playing Golf in 1978 when I was about 9 years old. Played A LOT through middle school, and sporadically into high school, with my last round being in the summer of 1990. Decided about 3 months ago to pick the game back up, and have completely immersed myself back in it. I am almost exclusively self taught, save for a few lessons back in the early 1980’s. I stumbled onto ABS via Al Barkow’s website when I was trying to gather some info. on Hogan and Snead. Biggest LB moments from Mod 1: late wrist rotation/release, pitch elbow, role of the right foot on downsing, and wrist interaction (lag) w/heavy club during transaction. Before starting ABS, my average score was somewhere in the mid to high eighties, with the occasional 82 or 83, which is pretty much where I left off in 1990.

For any of you guys on the fence, the ABS course is just fantastic, and a great value…Lag is a fantastic and very knowledgeable teacher, and Bradley Hughes’ interaction here is just priceless. Additionally, I want all of you guys to know how much I appreciate all your interaction here, and how much it has helped my swing, and overall game.

Lastly, this is the first time my dad and I have played Golf together in 22 years…what a privelege it was for him to be there when I shot my best score to date.

Thanks again Lag, Bradley, and all you guys here…looking forward to Mod.2 and much more!

Welcome back to the game, ABS and new lower scores…Congrats, a little dedicated hard work with the eagle eye of Lag is paying off already!

Well the event was actually yesterday…but eventful nonetheless…and just wanted to get a few thoughts off my chest.

Hadn’t played in quite a while and started to really practice hard a few days before with some old Haig irons and laminates…it took awhile in practice to get them going but it sure paid off. Although it was just a large scramble event…there are some pretty decent local players in it. Had we made more very simple putts we might have won.

But as to ball striking: I was asked after the outing by one in our group if my clubs were legal. He said that I was hardly “swinging” ( I grinned to myself ) and out-driving everyone and hitting greens with seemingly little effort… ( that’s when the duck on the pond image brought another self-imposed grin ). He was correct…I was piping all day to whatever I looked at. Hit nearly every green…not exactly all close but very servicable. A cool one was to an island green like Sawgrass…it played 152 and I carassed a 7I to 6 feet for bird.

I center cut every fairway except 4 of them. It was 50* outside with 15mph winds. Each time I missed was when I tried to hit it into the next county…the pivot stalled I guess and I snapped hooked each one of them. But for the shots on the day I took the pre-impact hook, post-impact slice feel and intention to a more micro-level. I was actually trying to impart opposing spins on the ball- probably the same effect as the pre-impact stuff…it just seemed to make the intention to do that with a hitting motion a little easier to do if that makes any sense.

Great day…gotta get more offset removed from the old hardware…I think I want the faces bent as open as can be…almost to look like one can’t hit them…this stuff is the best…it really is!

I had the rare and very special opportunity to watch TM hit some balls the other day. It was like… Golf Imagery for the Soul… really inspiring.
I took those images to the course with me yesterday and was hitting the ball pretty darn good for me.
Someone who was standing by and watched me hit said, “Wow, that ball was motivated !”
They could be the nicest words anyone has ever said to me