So we know Lag wishes there were more long iron shots on tour these days… I couldn’t help think of him on Saturday.

Steve Stricker and Woods were teamed together. The weather was cold for them and everyone was quite a bit shorter off the tee (did you see how many people couldn’t reach that 29X yard par 4?).

Tiger’s driver was a bit of a pull I believe, he still had 233 yards to the green on a Par 5. He pulled out three iron and absolutely drilled it for a kick in eagle. Anyone else catch that? Hate him or love him, this guy loves long irons.

This year when he lost to Y.E. Yang on the final hole in the PGA championship, they both had long shots to the green and Tiger pulled out a long iron. Yang pulled out a hybrid and threaded a needle with a tree some what in his path, and dropped it by the hole, pretty much insuring the win. Someone (hybrid fan) said see? Even Tiger can’t beat a lesser skilled player using a hybrid. I called horse poop on that one. I would give Yang 20 more re-tries at that shot and I don’t think 2 of them would have been that good. I’m sure Tiger enjoyed laying a whoopin’ to him on Sunday though.

Anyway, I was just wondering if anyone caught that great 3 iron he it from 233 yards.

YE had purposely practiced that specific shot from that area in the practice round too.

That shot was the highlight of the president’s cup for me, if we are talking about a single shot. The DTL shot was just amazing stuff, with the ball starting out low and taking off like a rocket. You don’t see that reaction very often from him on shots besides putts, so you know he got all of it.

Overall play though, I thought Tim Clark was amazing, especially on Sunday. Zach Johnson played pretty well and just got steamrolled. I have a friend that played against Clark in college that says he could practically hit sprinkler heads with anything in the bag. That’s obviously an exaggeration but I think it goes along well with Lag’s earlier comments on Clark’s control of the ball.

prot,
Myself and Lag were about 30 feet from Tiger when he hit that shot.
Stricker drove off that 18th hole as they were playing foursomes.
Clark drove for the Internationals and Weir pulled his 2nd shot right of the green (he seemed to hit a lot of pull, hooky shots that day)
Tiger flat out flushed that shot just as we all knew he would. My guess is it was 4 iron looking at the loft and head shape from our angle
Tiger just has a very different iron swing than he does with his driver.
On the driver he swings WAY TOO fast from transition, gets up on his right toe early, loses his grip with the ground, flicks the club out and tries to save it. That is his driver swing 7 times out of 10 and the driving accuracy stats show it.
His iron swing is much more grounded. His right foot stays down longer for ground support. He rotates his body through nicely without flipping at the ball. He finishes in a high, club face held off position. It is a much more controlled swing. It is power yes, but it is designed for accuracy also.
There is NO other reason why he would have two different style swing other than the fact that his driver is too light. He has lost feel for where the clubhead is and sprays it all over the map. He may well be one of the best iron players in the world, but the driver is a huge issue, which he seems to seemingly always get away with, because the courses are reasonably wide open in set up and accuracy is not a premium.
Very sad, but true- that driving it straight more or less means nothing

yes, we were right there, and it was a fine golf shot… controlled swing, properly shaped and struck with the sound of great compression. I agree with Twomasters… Tiger is using two different golf swings because of the difference in comparable head weights from iron to driver. Tiger needs a heavier driver in his hands so he can feel the club, as do many of the other guys.

Furyk, and Clark were the only others that really impressed with controlling the golf ball, and I suppose Striker also, but I don’t think his golf swing would do well if he had to be hitting bucket full of long irons like we did the day before at The Olympic Club. The straight arm stiff wristed action is fine for short irons, and a super lightweight driver.

But in all honesty, and I really mean this without prejudice, the best ball striking I saw all week was Twomaster’s 68 at Pasa Tiempo on Thursday, hitting every fairway with a vintage persimmon driver. Working the ball with total control left or right, into the proper position of the fairway that is required on such a Alister MacKenzie masterpiece of golf course architecture.

Here are 2 different set of pics of Tiger '09

We get taught all this in this course. It helps to understand and train so we can reach our highest level. Not critiquing Tiger as he is obviously awesome. But the differences should be noted- and looked at to see why one club he can’t find the earth with and the others he is outstanding 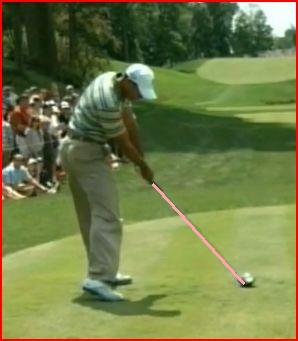 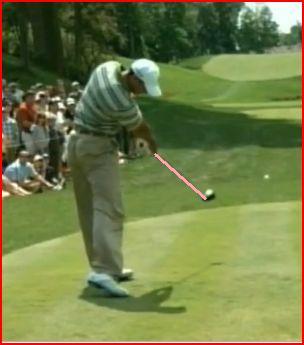 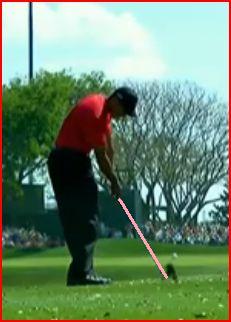 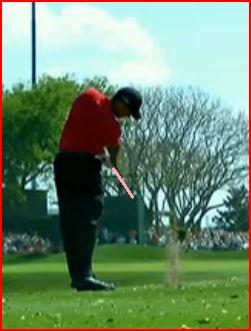 Four of the great drivers of the golf ball. You wouldn’t see these guys hitting it all over the map. These swings developed from a time when it was critical to place the ball in the fairway. Miller was also very long off the tee
and used that to his advantage along with very accurate driving to pepper the pins and take it as low as about anyone ever has when his putter was working.