Tiger and getting "Stuck"

Been hearing about this “stuck” stuff for dad-burned years now, and seems Butch couldn’t get him un-stuck…now looks like Hank can’t either. What does that say for a teacher who has the best student in the world?

I don’t even understand what it means( for the golf swing that is). I thought we wanted it low, down , behind, “deep”. Can someone explain and elaborate?

Been hearing about this “stuck” stuff for dad-burned years now, and seems Butch couldn’t get him un-stuck…now looks like Hank can’t either. What does that say for a teacher who has the best student in the world?

I don’t even understand what it means( for the golf swing that is). I thought we wanted it low, down , behind, “deep”. Can someone explain and elaborate?

eagle,
I feel that Tiger, when going full throttle, seems to start the down swing with a very quick vigorous vertical down screwing motion of his torso, a real power move, which can result immediately in a very large torque around the vertical axis. Likely too much torque for the rest not being able to follow immediately with the same vigor. If instead he would start a bit smoother to explode more towards impact he would not get stuck. Perhaps he is a victim having got too much raw power and does not always succeed harnessing the various contributions harmoniously.

I honestly don’t know how his ‘coaches’ can’t get it – as he has two totally different swings for his driver and off the rest of his clubs.
If he can shoot the scores he shoots from halfway up pine trees it would be amazing what he would do when he gets ‘unstuck’ 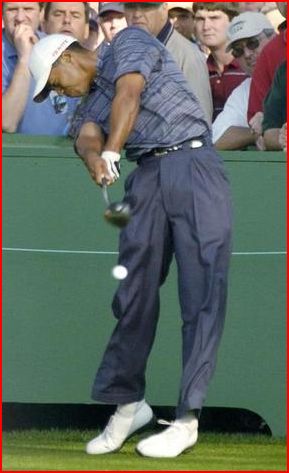 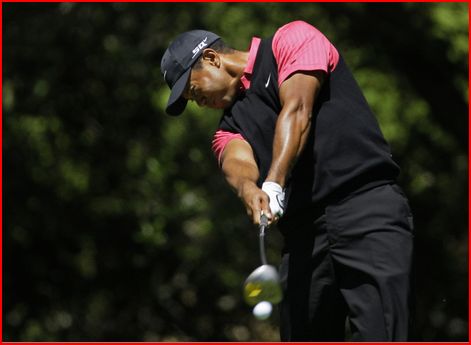 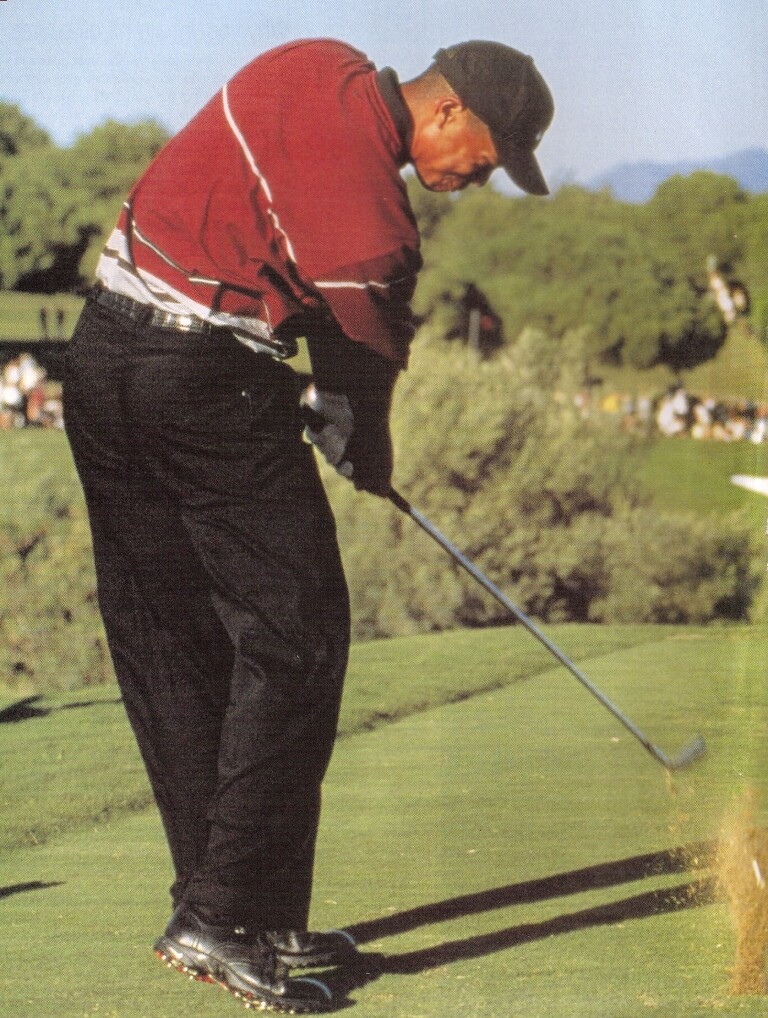 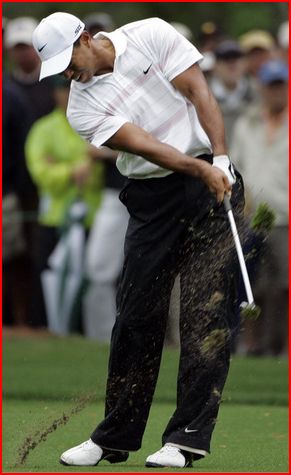 Twomasters wrote:
[b]‘STUCK’ is a really poor word that Tiger and the media and announcers use to describe what he does…he doesn’t get stuck at all

I honestly don’t know how his ‘coaches’ can’t get it – as he has two totally different swings for his driver and off the rest of his clubs.
If he can shoot the scores he shoots from halfway up pine trees it would be amazing what he would do when he gets ‘unstuck’

He is a vertical shoulder right fielder with driver- much more open shoulder left swinging with his irons…any ABS student can see this and it is without doubt the root of his driver evil.[/b]

Thanks. Yes, you do wonder what he’ll shoot when he gets un-stuck and his putting gets back to his normal. Or what he would have shot using 1 iron off the tee like he did at the British Open that year, even though Augusta puts such a premium on distance.

Although it would be an effect over a cause…I’m still struck by the action of the trail hand R thumb distal phalanx- the thumb nail area. In the first two pictures that area is almost curved upward- like he’s holding on to a pencil. No fight going on there.

In the 3rd picture we can’t see, but the last picture the thumb nail is most certainly bent down…way more fight going on

In Haney’s defence he is well aware of Tigers issues and Tiger has commented that he was working with Hank to try and quieten his lower body. The issue is they don’t know how to fix the problem.
Tiger has lower body mechanic issues,Tiger can’t slow his lower body down he has tried. This is how tigers body naturally create speed, tiger need to re train his biomechanics and power generation process to how his body naturally creates speed.
Tiger’s lower body continues to accelerate and doesn’t decelerate or stabilise at impact. As a result his lower body continues to accelerate into impact and beyond, He has to over accelerate his upper body and arms to try and keep up with his lower body. he spins out and hits a block with his driver.

Good luck to Tiger and Hank, they can try what they like, they need to search beyond mechanics to fix tigers issues.
We can’t criticize Hank for Tigers issues it’s beyond his field of mechanics.

Tiger is raw ability,to play and score he is unbelievable. To chop it like he did and come 4th was amazing.
The bottom line is the object of golf is to shot the lowest score possible and no matter how tiger hits it, he always find a way to shoot low amazing.

yup, but that will end when he is no longer the best putter on the planet…chip and putt all you like but you’ll not win from the bush…guarenteed. By the way,where have all the O.B. stakes gone? MAYBE HE SHOULD GO TO THE GYM AND WORKOUT?

I think that 3rd picture down shows just how disastrous Haney has been to Tiger. That photo is from the 90’s when Tiger really didn’t miss as many fairways as is assumed- he doesn’t even get it there with his irons these days. The shots he’s hit with his driver and 3w over the last few years are scary bad- it’s amazing to me that he can’t figure out that he’s too good to hit those shots and still thinks it’s because he can’t master the stuff Haney is teaching him. If he and Haney both understand he has lower body issues then why has he gotten more and more explosive down there? The 3w he hit off of 13 in the last round was just madness. He’s hitting duff sky drivers and snap hooks and slice blocks. It’s almost funny. As for his left hand grip?! If you’re going to crazy with your lower body, and you know that you can’t stop it, at least balance it out with a strong grip just for the hell of it. It speaks to his stubbornness that he keeps going with it. I suppose it’s part of what makes him great, but he has to reach his limit as hard as he has to fight for every swing he makes. I still have a sneaking suspicion that Haney actually works for the rest of the tour pros- in the same way that I’m sure Rafa Benitez works for Manchester Utd… it’s the only conclusion I can draw…
The bottom line with Tiger, IMO, is that he is so much better than everyone else. They kept talking about who was going to step into Tiger’s shoes in his absence but really what we got to see was normal behaviour, nobody plays well every week like Tiger does, not to that level. Over the course of a year maybe there’s dominance but not every week like the way he does it. It’s him against the world basically, and each week a different member of the world team steps up to take him on. He normalized what he does in our minds because he does it all the time, but all you have to do is look at the times he was away to see how it works for the mortals. It’s possible that Tiger has become Phil’s motivation too looking at how he stepped up last week, who knows…
I agree with Twomasters, if he starts hitting his driver NEAR the fairway, it will be silly- maybe he knows that already and prefers the challenge

When you hit down on the ball, the more you hit down, the more th path rotates out to the right. Tiger’s ‘stock’ shot with the driver is a draw and he can keep it pretty low.

But, his problem shot is block. Which is a path and face going well out to the right of the target.

At it’s base, Tiger’ issue is he can’t control the clubface. It gets wiiiiide open and he blocks it dead right. I don’t think he has an issue with getting stuck, I think his base issue is his left hand grip. Haney has him grip the club in the palm of his left hand intead of more in the fingers like most of us do and like Hogan talks about in ‘5 Lessons.’ One of the things that appealed to me about ABS is stuff like the grip you sort of figure out on your own as what allows you to do the Modules most efficiently. However, I have a hard time believing there are many golfers who could do Module 1 with the grip in the palm of the left hand.

To me, that’s the main issue. He’s got a lot of #3 Power Accumulator with a palm grip. Trying to square that clubface up with that palm grip is hard…face gets wide open, block comes into play.

I’d also suggest he stop hitting down so much with the driver. This would make it ‘more okay’ to swing right with the driver, allow him to get the path more square to the target and hit it further. But maybe he wouldn’t like the trajectory.

Haney is a 1 Plane Swing teacher. When I got back into the game I was introduced to some golfers who were 1 plane swing proponents. None of them could hit a driver worth a lick but did have some success with their irons. To me, the 1 plane swing stuff seems factually inaccurate and not necessary so I avoided it. When I later learned that Haney was a 1 Plane Swing teacher, it didn’t surprise me that Tiger had such issues with the driver.

1 thing I don’t like about ! Plane Swing theory is that the #4 PP gets disconnected early in the backswing which I think makes it hard to re-connect it on the downswing.

Tiger is one of the best upright iron players ever… Hale Irwin also.

I love his iron swing… I don’t like his driver swing.

Echoing “TwoMasters” I agree, he has two completely different swings.
Also, two completely different golf clubs. I don’t know his iron specs, but I would guess he might have
15 ounce irons, and a 10.5 ounce driver that simply is not consistent with how he built his golf swing.
Those kind of clubs are going to be over acceleration black holes for guys like Tiger, and others.

He’s throwing the right hand and arm at it, but not against anything (weight), so he simply can’t feel the club, and every swing is like playing the red and black in Vegas. He get’s steeper with the shoulders to try to compensate which stalls the pivot some… and that is probably not the best way to go…

I don’t really blame him… and I disagree that it is a biomechanical issue, because he can flush his long irons fine.
It’s the crap gear everyone is using, and he feels he has to use it because you can hit it farther… sure… but not straighter…
but the tour courses are wide open, no OB anywhere as Paul said, rough is not really factor, and Tiger is a great Houdini out of the trees, and he never gets a bad break it seems… so it is what it is.

All in all I think Tiger is a fantastic striker… I don’t think he would be having this issue if he was hitting persimmon… but he doesn’t want to give up 40 yards on 7500 yard courses… I don’t blame him.

Stinger anyone? One of my favorite drills for improving ones timing re rotation vs. arms/club position is the STOP SHORT…an abreviated follow thru. Perhaps this is why he almost never misses a fairway when using the punch or “stinger” swing? My thoughts… Paulsy

sure, because by doing that, you keep the hands and the torso connected and working in unison. Keeping the left shoulder ahead of the hands is inhibits independent arm movement, keeping the arms in spoke mode. No one did this better than
Arnold Palmer in his prime.