So I have been experimenting with my putter. Added a new light weight shaft. Began using a new mind set on the greens. More of chipping mentality and after my round yesterday feel like I have lost the feel of my putter head. I had several chances early in the round to convert on putt from within 10ft for birdie and couldnt do it. I know the shaft that is in my putter now is longer which could cause the swing weight of the putter to change so I am thinking off cutting it down to the original length and adding weight inside the shaft in the form of lead in an attempt to increase the swing weight. I want to try to get the swing weight up to close to the swing weight of my wedges.

What are you all using for putters? Lag what is the swing weight of your putter? I know you have been putting a lot better as of late.

Any thoughts are welcome,

My new set-up wih my TP Mills and added wieght. I played with lag and his putter reminds me of JAWs he has teeth coming out of the bottom of that bad boy.

Here;s what I have been working with my Set-up first of all I use module 1 My address for my stance I put my toes pointing toward each other (pigeon toe) I lay my hips,kness and shoulders to my 4:30 line and squezee my knees together(slight Bubble Drill). With this set up it allows me to swing freely wih my arms pinned in close to my chest.
My PutterI added lead tape to the back of my TP Mills putter and at the bottom of the grip area I did this as an expermint. Im really starting to like it, I can actully roll the rock with this set-up well. 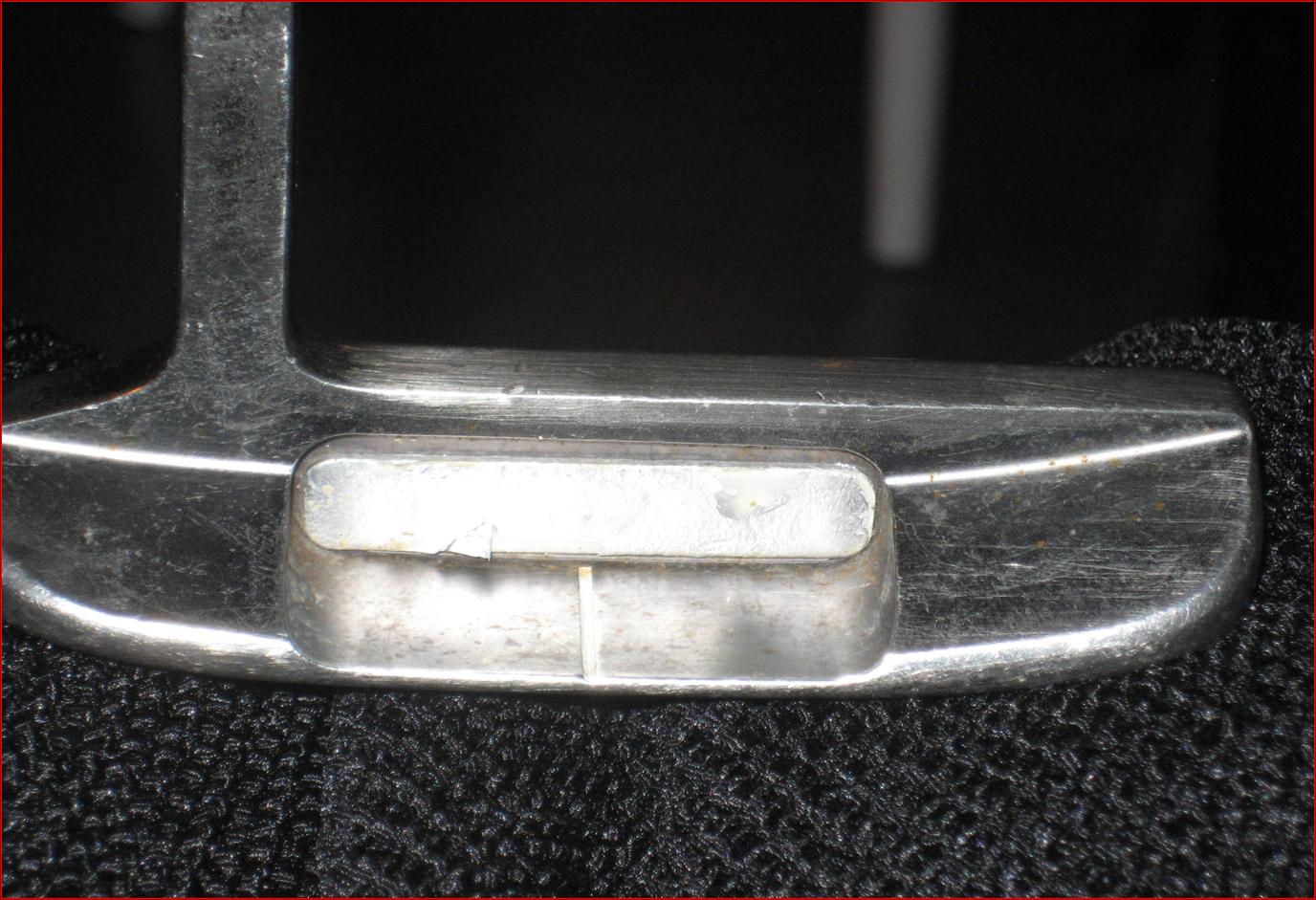 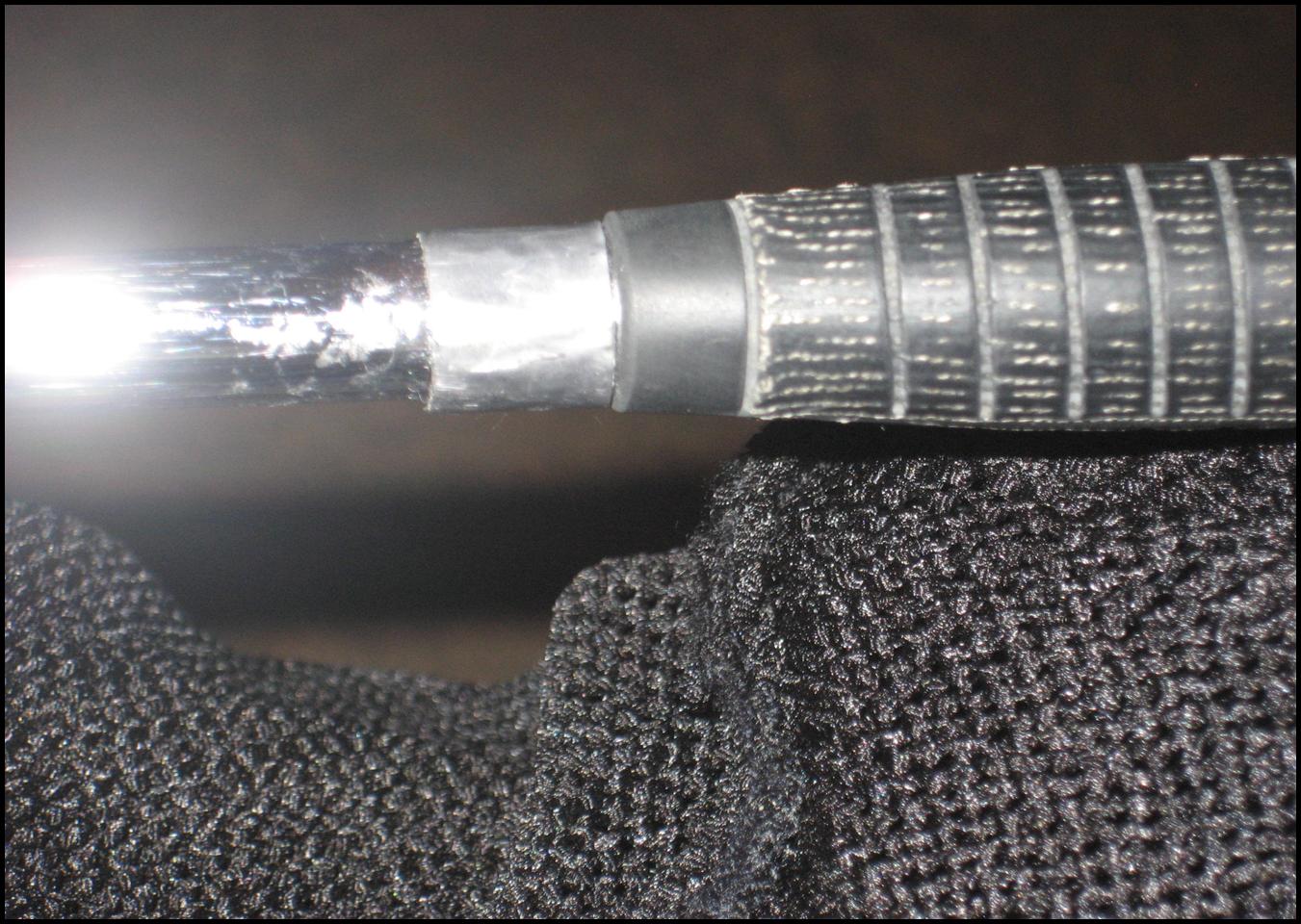 I bent my julius boros putter way flat some time ago. It’s now more in tune with the rest of my clubs. I have to set up closed to the 4:30 line or else I’ll hit my right knee on the way back.

Not using the “Jaws” putter anymore… still heavy at 18 ounces though. Definitely still putting the lights out. After not playing for two weeks, being sick
all last weekend and earlier this week, played with Barkow today out at The Metropolitan and with zero practice, three putted the first green which was a bit
disappointing. However, after rolling in three birdies in a row on 6- 7- 8, toss in a kick in on #4 that turned a sour start into a front nine 33. Wind picked up on the back
but just hit fairways and greens and put together a bogey free back nine with another bird on 17 for a 68. Of course we all know how important putting is to scoring
but it’s extra compelling to see it in my own game first hand. Today’s round a year ago would have been a… hit 14 greens and shoot 72 kind of round. I enjoy playing
golf regardless of what I score, but it is interesting to keep going out with some adversity and still make a few putts. Putting well does put you into a different frame
of mind. It’s easier to feel more positive about results. After I rolled in a nice birdie from 20 feet on #7, Barkow said “that’s three in a row” and I said no… just two,
as he was thinking my birdie on #3 was part of the string I suppose. I told him I’ll just birdie this hole (#8) to get the three in a row. With such a positive affirmation,
I stuck a 7 iron 8 feet and rolled that one in. On the 9th tee I said, ok… 4 in a row here… and had a good chance from about 12 feet which I narrowly missed.

There is no doubt that the power of “the flow” or the feeling of stringing them together. Whether it’s birdies for a pro… or pars in a row for a 15 marker… it’s always
a nice feeling to be in that kind of head space or "zone’.

Back to my putter specs… just have it set up now like a real golf club and now simply applying golf swing concepts to the greens as compared to living to two
opposing universes. It’s all one game now… only took me 43 years to figure that one out.

Lag - what did Al think of your putting methods? He seems like a pretty good putting idea filter.

One of Al’s ideas is to allow the right hand to control the club… and I am allowing that feeling to flow in my stroke more now than ever.
If I had to choose to putt with one hand or the other, it would be the right hand. I spent a lot of time in the past trying to keep the hands
out of the stroke using only a rocking of the shoulders, but that action never became natural to me no matter how much I practiced. Allowing
the right wrist to bend back is tremendously valuable to “touch” and “feel for speed”. There is no way I am ever going to believe that the big
muscles of the back and shoulders are going to offer the kind of sensitivity and touch that smaller wrist muscles will allow. So in other words,
just like the golf swing, I am using both, not trying to isolate one or the other.

That was a fine round, and kinda out of the blue after being sick and the layoff. Isn’t there a saying about that?..watch out for the wounded animal or something? Another point to ponder about this mysterious magical game. I bet you have a wonderful feeling in your veins after such a round…I wish it could be bottled…or put into a red pill!

THREE birdies in a row! I’ve never experienced that in over 50 years, but I realize for you top level guys it is not necessarily a rarity…and people at my level have our own “zone” metrics…like a string of pars. My longest string(so far) of birds is only 2.

I wonder what’s the longest string some of you guys have achieved?

I have done 4 in a row many times. 5 in a row a few times, and 6 in a row once or twice. Sometimes it’s just how the holes come up in their order. A short par 4 then a
par 5, then another short par 4, a medium length par 4, followed by another par 5 then a short par 3. That’s a stretch some courses might give you that make it
more than possible. You’re not likely going to do that through “amen corner”.

One day I will post my string of birdie so for now It will be pars and Bogey’s. The flat sick and fairway and greens will be on my mind every time I play.

So after hanging out at lags place for awhile we got my gear all set up.

A Full set of Macgregor M75s, 6 degrees flat. Added a bit of lead tape to the PW and 9 to get it up to weight. The M75s are rocking a new set of project x 6.5s and golf pride half cords. Macgregor persimmon 2 wood. Tossed out all of my modern gear except for my putter. Taylor made rossa with a regular leather winn grip. The putter has a project X shaft in it. Cut to the same length as my pitching wedge with lead filling a huge portion of the shaft. In my hand the putter and PW feel the exact same and are nearly the same weight.

So far with the new set up going from chipping to putting is nearly the same and my distance control has been amazing because I can feel the difference between 6" of distance in my body. We also bent the putter to match the PW in lie so its now 6 degrees flat as well. Its also a little bit lofted so I can have a nice forward press and use the same motion for chipping and putting.

The results so far are pretty remarkable. In my last 2 rounds I have converted Sandy pars from over 15 feet 6 times. Additionally I’ve made 6 putts over 30ft. If only I could get my ball striking and my putting to match up Id be playing some pretty incredible golf.

Got out for a quick nine in the 35 mph wind that we had at mare island yesterday AKA the mare scare. shot 4 over. The round was highlighted by driving my ball over the back of the par 5 5th hole after hitting 2 wood, 2 wood. That and hitting the pin on 9 and making a 3 footer for bird.