Does anyone have a good game plan for removing stubborn screws on sole plates/inserts? I’ve tried heating the sole plate first, heating a 2nd screw driver red hot before attempting with another cool temp. screwdriver, and using Frearson (Reed & Prince) screwdrivers…If all else fails, I presently drill them out but is there a better method?

Thanks for your help

I warm up the entire clubhead up on a radiator so the heat doesn’t excape too quickly from the screwdriver tip.

Before resorting to drilling them out, I use an “easy out” or “quick out” or “screw extractor” (not sure what they are called over there) which you screw into a damaged screwhead to screw it out. Its better than drilling them out cause you aren’t left with a big hole where you would like to fit a new screw.

If that fails then drill it out and glue in a wood dowel.

Here’s a quote from the local supply house, “Spiral screw extractors are used for removing pieces of broken screws. Insert the screw extractor into the hole where the piece of threaded screw is located, strike the end of the extractor with the hammer until you are sure that the extractor is set, then turn it counter clockwise using an adjustable wrench.”

IMHO: Sometimes using an adjustable wrench can strip the corners of a screw extractor and ruin it. Using a tap wrench instead of an adjustable wrench is less likely to strip the corners off the head of the extractor and can work the extractor more efficiently than the wrench. The tap wrench applies more uniform vertical pressure and torque to drive the extractor. The downside is the additional cost for the tap wrench, maybe around $20.00. After a few tough screws are defeated, the $20.00 should not feel so expensive.

Here’s an image of extractors and tap wrench: http://en.wikipedia.org/wiki/Screw_extractor

I would go for this type of extractor (and pre-drill a pilot hole in the screw head while there is still some screw head left). 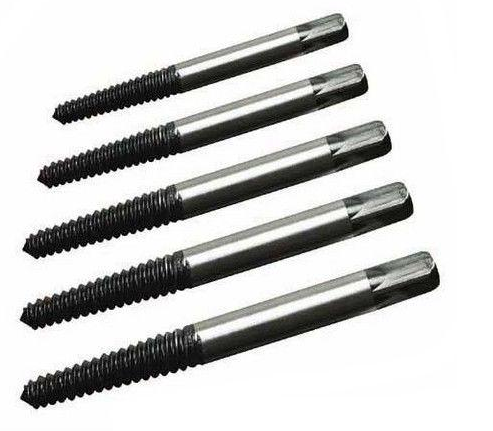 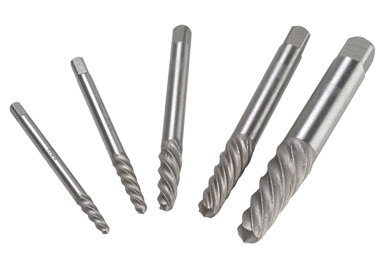 NRG,
The starter hole makes life better for sure.
Those extractors in your pic look much more effective than the extractors I’ve used and cussed.
Are your recommended screw extractors (aka “easy outs”) the “Sears Schroeder HI-TRAC 5-pc. Fine Thread Screw Extractor Set” ?
Thanks.
1T

Thanks for your input 1T…Yes, I’m very familiar with the old tap wrench…I used to design and build electrical panels and have tapped many a hole (calm down CC). The funny part to me was that it was easier to tap holes with a drill with a little practice. But you’re right $20 is cheap if you plan to refurb several clubs…

NRG…I’ll make sure that it’s a fine pitch set too. Sounds like the extractors are probably like taps and are very brittle. Looks like you need to be careful when using them.

From a quick Google - it looks like it’s them.

A thought or two about screws. The very first and simplest thing to do is to make sure that the screw head is clean and that the screwdriver or bit fits perfectly. Often, a smaller headed driver/bit works well.

Consider investing in a micro butane/propane torch that will allow you to place direct heat on a very small area but be “oh so careful”. They are not too expensive and Harbor Freight and others have them. Fuel comes from the cigarette and cigar areas at the local market. More heat is usually the answer and saves the trouble of a #1 easy-out and a small drill bit. I rarely meet a screw that can’t be defeated with this method but you must watch any surrounding wood areas for potential burning as you apply heat so be careful. Make sure the bit fits well.

Just as a follow-up, I went to the local Big Box and purchased a BenzOmatic micro torch…Unfortunately they didn’t have ideal screw extractors at the time…

Really like how this little guy performs. Might need to tweak out the safety switch though. I had another practice driver head with 4 stuck screws. The first 3 came out right away and the 4th wasn’t so easy without burning the head. Wish I had this tool many moons ago…

I took some temp readings as I was doing it. It was interesting to me that even though the heat was concentrated on the screw head, the sole plate had higher readings as soon as the heat source was removed…The screw was 130 degrees and the plate 160 degrees…I did burn the head a little on the bottom, but think it has added some character to it.

I think I remember Rat saying that you could place a small piece of copper pipe or something over/around the screw to contain the heat when heating it like that, so as not to burn the surrounding areas.

What about a spray bottle filled with ice water and spritz the surrounding area often while giving all the heat to the screw?

Or wrap a real cold wash cloths around the area while heating only the screw?

Thanks for the suggestions RR & NRG…FYI the micro torch that I recently bought comes with a “hot blower” attachment which should help too. Maybe it’s one of CC’s old flames.

I took some temp readings as I was doing it. It was interesting to me that even though the heat was concentrated on the screw head, the sole plate had higher readings as soon as the heat source was removed…The screw was 130 degrees and the plate 160 degrees…I did burn the head a little on the bottom, but think it has added some character to it.

Not a shocker since the sole plate is probably made of aluminum if it’s a driver, brass if it’s another wood (try a magnet to see if it sticks). It will wick the heat away very fast from the steel/brass screws at quicker rate.

) and holding it on the screw for a little while to heat up the screw all the way down to the glue under it before turning. More of a press and wait then turn because you want a deep heat, not just a hot tip but cold bottom. The glue needs to melt all the way down deep to make it easier to unscrew.

(Oh oh, the Captain has to show up now, how can he resist?

I’ve found the best way to defeat stubborn screws is to heat them with a soldering iron. This will concentrate the heat directly to the screw head and penetrate right thru it, without burning the clubhead or discoloring the soleplate. It works much better than a mini butane torch.