Interesting to see Tom Lehman and Mark O Meara near the top after the first round. Todd Hamilton also. Seems there is a comfort element that certain players feel playing over there. Seeing both younger and older players in the mix tells me it’s a true test of golf. Clearly not the typical one dimensional game usually played in pro golf.

Should be an interesting week.

Any ABSers have plans to see any of the action live this week?

I have really enjoyed the hard and fast conditions. They softened it up a bit for round two because players were complaining. Tiger is going to be tough to beat because he doesn’t have to hit a driver. I would like to see Lee Westwood play two more solid rounds and claim his first major.

The harder faster surfaces force players to consider what that ball is going to be doing when it hits the ground. So this of course requires more thought into the shotmaking aspect of the game… combining trajectory and shot shape elements. Much more interesting.

It also makes one want to watch what the other players ball is doing as it bounces around in the fairway, short of the green or on the surface.

It’s refreshing to see a golf course where the grass is not one homogeneous color of lush green from 1 to 18.

What’s Jimenez wearing on his left arm? Anyone know?

I agree with the fast conditions. I just wish every hole did not look the same. Its crazy to see the ball run over sixty yards on tee shots! I think the fairways are faster than anything I have putted on! lol!

My mom is a occupational therapist who watches golf told me that Jimenez had tendinitis because of that thing and then I went and looked it up.
From pga.com
"Jimenez, who is playing with padding under his left elbow because of tendinitis, became the oldest winner in European Tour history when he won the Hong Kong Open last year at 48 years, 318 days

From the UK newspaper “The Guardian” on Friday 19 July:-

Jiménez only recently returned to the game after breaking a leg in a skiing accident and he is also suffering from tennis elbow in his left arm which he says is a result of the layoff which has caused the tendons to become inflamed once he began playing and practising again. He sees a physiotherapist for half an hour every morning to regain full mobility.

This is INTENSE!!! What a tournament!!

I’m happy to see the last two majors… how they have set up the courses. Both great courses, and set up in a way that has taken the bomb and gouge aspect out of the game. The history of golf is not bomb and gouge. If the major events are for giving the games best players a platform to shine, then these last two events have been successful.

Phil was there at Merion. While he came up short there, you can tell by watching him play that he WANTS to win. Phil doesn’t always strike the ball great… or even putt great… but when he is in contention… you can tell his heart is 100% in it. Tiger and Phil are this generations great players… with Els right there also… and Cabrera, while he doesn’t win on the regular tour often, he has the right stuff also when the chips are down.

The great players have a way to get it done. To keep their heads together, and adjust and adapt their games whether or not they are striking it or rolling it perfectly.

If the course is a great championship layout, and it’s set up correctly, it brings the cream to the top. Merion, Muirfield are good examples. The list of champions and Muirfield certainly supports.

Statistically Westwood I’m sure is a better ball striker… but that was certainly not the case on Sunday at Muirfield where it really counts. Phil struck the ball with fine precision, and has the ability to work the magic on the greens as we have seen many times. It’s also to his credit to have won two weeks in a row… winning the Scottish Open the previous week.

This is the kind of golf I like to see.

It’s been an amazing year if you look at Cabrera - Scott… Phil - Rose… Phil - Westwood.

I clipped this from his second shot to the last, pretty good either way you look at it.

Btw, it seems like every time I log on here these days, the site crashes and I get that ‘general error’ message, not sure if you guys are having problems… 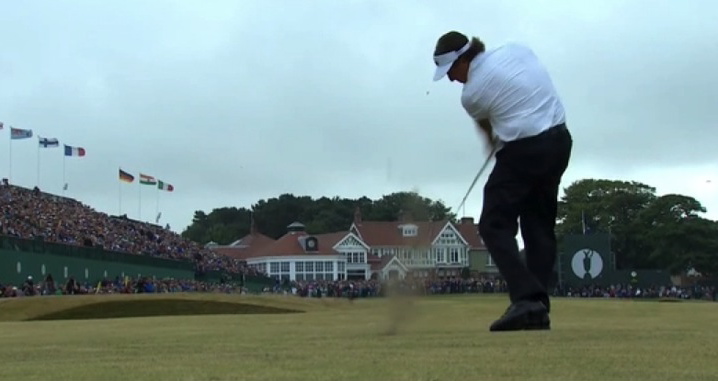 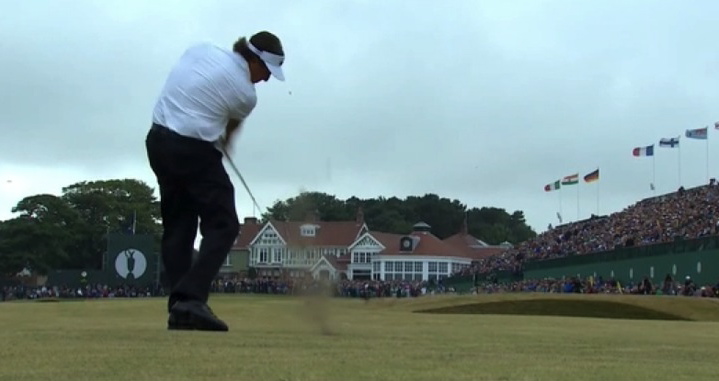 It seems a lot of the guys are using a swingers release for the driver and a hitter’s release for the shorter irons. It gets harder to square up the face with a longer club especially the frying pan drivers, so most feel they have to throw the right arm at it to assist. Probably one of the reasons accuracy suffers with it from time to time. It’s not impossible to do it, but you really need delayed, then very fast explosive rotation to do it.

It’s such a breath of fresh air to see the last couple majors set up to where the players first thought from the tee is to get the ball into the fairway… if not which side of the fairway and with a specific distance in mind also.

Playing the ground game also seemed to put the better players on the first page of the board.

Yeah, to see tee shots be as important as they should be has been great. And I was delighted Muirfield stood up in that way too, it would’ve been a shame had it been beaten up. Though I get the sense the R&A, and the club itself, were never going to let that happen. The ground game is a real marker of skill, and you’d have to say that it was a very strong leader board for all four days. I didn’t get to see much of the US Open unfortunately.
I reckon Phil’s ball striking understanding in his short irons feeds out into his bag, and is maybe also finally getting him to figure out the uselessness of the frying pan driver concept. Tiger could probably do with paying attention seeing as he hasn’t looked good with the driver ever since he switched to graphite back in the day- he hasn’t swung it particularly well with the club either, though you’d have to say there’s a chicken and egg issue in play there. I’d say Tiger has narrowed his major chances to two a year because of his driving, even for as good and as gutsy as he is, to put his mid to long iron game under bad driving pressure for 4 rounds is a big ask. He looked tired or something like that in the last round.
Phil came from the pack perfectly, it makes perfect sense for him to do that in hindsight. The online betting here had him at 20-1 with 6 to play… not bad money!