This was in the spring of 1999 when I was teaching my 5 year old daughter to hit a moving baseball. I notice that with the super lite bat she would kinda swing wildly and miss the ball more than not.So off to the shed where I grabbed my old heavy wooden Louisville Slugger.I handed her the bat and at first she could barely lift it,however once balance was attained and the bat positioned correctly she was consistently connecting with the ball…providing Daddy is doing good pitches.After a few switches back and forth from the lite bat to heavy(she wanted the lite one) it became conclusive that heavy was where its at. This got me thinking about some other things more golf related. At the time I was giving free junior swing clinics at a local range on saturday mornings. So all the moms and dads would bring their young pups out for the fun.Alot of these kids were equipped with new kiddy clubs with the graphite shafts and super small grips and really short to fit the 4-6,7 year olds. But a few kids would have old mens clubs either cut down or not.So here is what I did…one saturday morn I proposed a contest which was really a cover for my “Minor Experiment” …I selected 4 boys about the same age and size,4 clubs 5-7 irons, 2 of which were custom high tecq kiddy clubs and 2 that were cut down mens heavy 5 irons.The competition was a simple hitting targets and distances.Unbelievable,when the boys had the custom kiddy light weight clubs they would swing them around wildly like a drunkin sailor barely ever making contact. I noticed that they kept there body pretty still while they flailed the clubs around with there arms only. On the other hand,the heavy clubs drew a completely different result…the boys were having to use different muscle groups and better balance because the weight of the club dictated they do so in order to connect with he ball.After a few back and forth exchanges of the clubs and a few questionable stares from the parents(I don’t think anyone caught on) it was a FOR SURE…they heavy stuff outperformed by a huge margin.I am quite certain that I pissed off alot of parents that morning when their little golfer was hitting it better with the old rusting heavyass mens cut down 5 iron then the $300.00 custom kiddy clubs…it was fun and very enlightning…OK, now this is only my opinion but I believe that we are a very lazy society overall, given that,is it any wonder that we demand lighter and lighter clubs? The manufacturers will comply with our demands for EASIER to lift and swing clubs to suit the interests of the shareholders.This however leads to a problem with the golf swing cause little Billy will never learn to swing his body while holding a club.He will only learn to swing the club while holding his body.Is it any wonder why its getting harder and harder to find a quality MOTION!!! My fathers comment yesterday was that “the swings in the 40s and 50s were far better than any of the moves we find in this era” Food for thought people. Paulsy

Great stuff Paulsy…makes so much sense.

I wonder if baseball was the same way back in the day. When I was a kid in the 50"s, I had a bat in which the handle had to be about 2"in diameter. I think it was a Ty Cobb or Honus Wagner model. I don’t recall the name, but I think is was from a time earlier than 1950. It probably forced one to get strong in the arms and wrists and then maybe forced the entire body to be more active to get that bat, the size and weight of a small tree, moving.

Some of the PGA guys I know, and that teach kids clinics, pontificate the benefits of light, new stuff- just the opposite. And to be frank…before I found this site, I was in that lighter is better camp for kids.

I think the entire golf club “butt weighting” concept seems really lost into the past.

Barkow was telling me that all the guys were doing that back in the day, even Nicklaus. All the lead tape under the grips and stuff.

I just put together a classic 60’s MacGregor keyhole driver and set it up at just under 15 ounces, and it came out E-3
I played it with Al up at Northwood yesterday, and hit it well. What it did is make me grip the club firmer, and really engage my pivot even more. It was shocking how much different, or heavier it felt than a club only an ounce lighter.

There is obviously a point of diminishing returns, but I suspect most players ideal clubhead weight, given some time to bone up to it, would be much heavier than most would imagine. There is no doubt that one extra ounce of weight with the multiplying effect of CF is very significant to the golf ball. It is something you can really feel, and the ball acts very differently.

I am also a kid from the 50’s. I enjoy your posts and your insights…keep em comin!!

Good idea…sounds like a natural fit for Bom…whatd’ya think 222? Any pictures or stats of bats back then.

Wish I could remember the name on the bat, but in the 50’s, it had to be about 20-30 years old at that time- I think. It certainly wasn’t the type being used at the time. It almost looked antique.

Thanks for all the thoughts, Paulsy… very interesting. I remember Tiger blaming his rolled takeaway on using heavy clubs when he was a kid- sounds like it was training and helping him in ways that he might not have been aware of…

RR,
Was it a Kren’s Special by any chance? Joseph Kren was a German bat maker that used to make bats for all the greats back in the day, even a lot of the guys who were on staff with Louisville Slugger etc. would have him make their bats. I picked one up in a garage sale a few years ago for a quarter! It’s worth a few bucks but I wouldn’t sell it. I don’t know any numbers but this one is certainly quite heavy and a little shorter than the standard bats I’ve come across. Interestingly, maybe in a similar way to golf clubs, it’s a little narrower in the barrel with a slightly longer taper going through the bat. Modern bats seem to have a sharper taper angle.
Maybe that helps…

I’m certain the name was of an American ballplayer…and I can’t remember the manufacturer either…just that the handle was huge!

Was poking around the WWW and found out that in 1859 the maximum diameter of a bat was 2.5 inches—so the handle could be that diameter as well.

Overall length has not changed over time…maximum allowable is 42"

Wow…wish I knew to keep that bat…it was at least 2" in diameter…maybe more…could be worth some bucks.

Good idea…sounds like a natural fit for Bom…whatd’ya think 222? Any pictures or stats of bats back then.

Wish I could remember the name on the bat, but in the 50’s, it had to be about 20-30 years old at that time- I think. It certainly wasn’t the type being used at the time. It almost looked antique.

HERE…and the steel 12 lb pipe I usenot for swinging but rather for posing in different sections of my motion to increase muscle awareness. 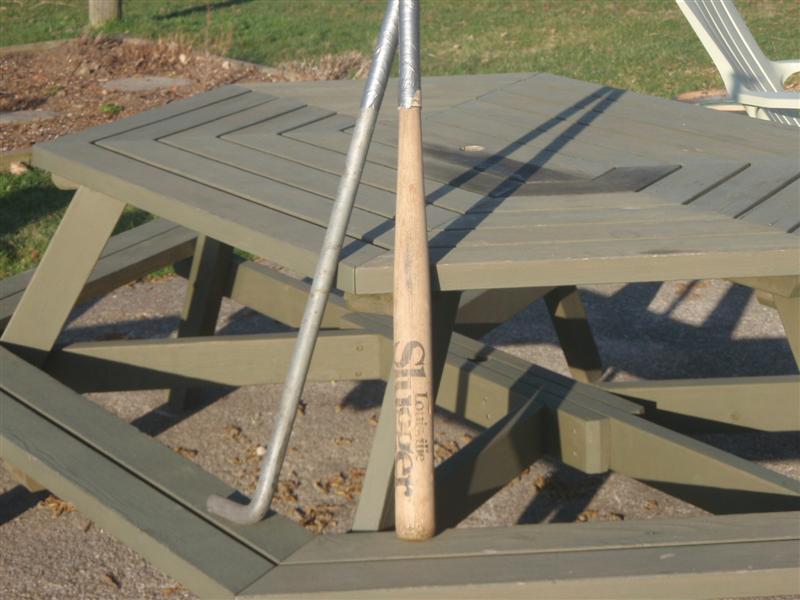 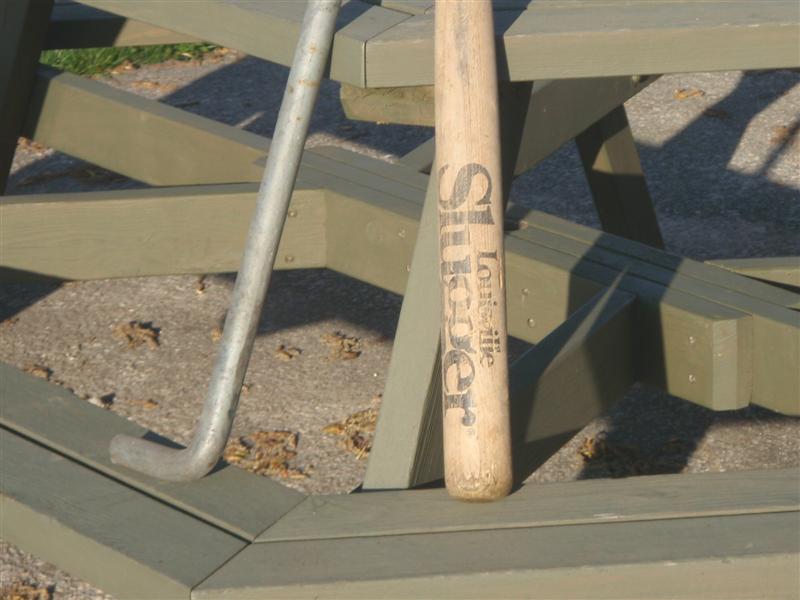 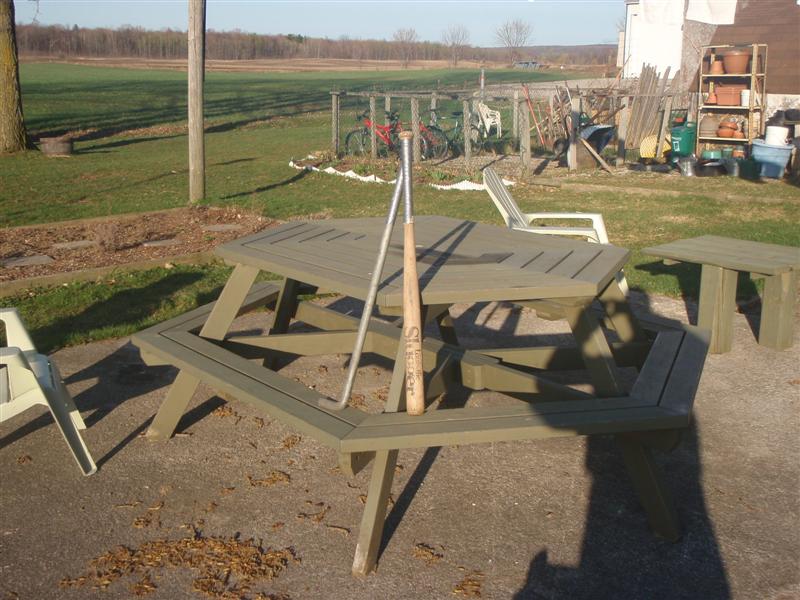 So while we are on the subject, I have some early 80’s Hogan Apex II’s in great condition. I got them flattened and the swingweight came back pretty light. I know people use lead tape, but wouldn’t that throw the balance of the club off a bit? Like wouldn’t they have chosen a different shaft in the head was considerably heavier? I’d love to just throw some tape on there, but am a little worried I might be losing some balance if I do it.

I wouldn’t be too concerned about that sb
Look at the pics below of Olazabal and Langers clubs…tape all over them
At Pasatiempo CC in Santa Cruz, California they have the set of irons that their local hero Juli Inkster used when she won the US Women’s Open a few years back.
there is lead tape absolutely caked on them…like makeup on a 10 dollar hooker…in fact I don’t think I have ever seen so much lead stuck on a club.
Lag will back that up… we both stood there looking at them as we eyed them at approximately the same time as we were studying the glass case with her goodies, and both let out a collective Holy S&iT when we both noticed it 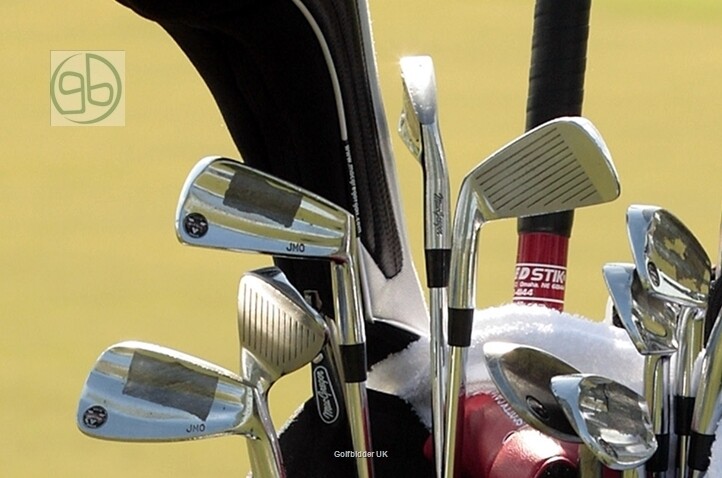 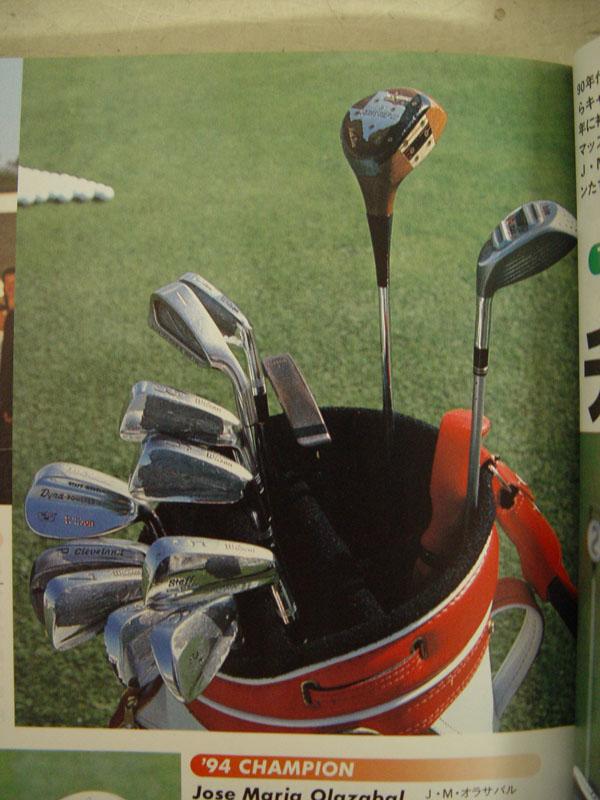 I thought I’d post what it a club looks like that has enough lead tape on it to go from D2 to D6. 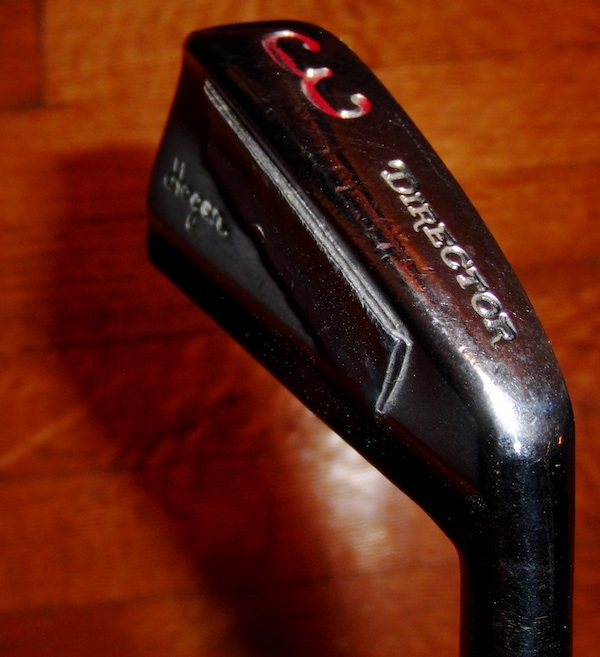 You are just fine going up to 16 ounce overall weight in your irons… I move mine progressively heavier into the shorter irons.
Where heavy clubs really help is with distance control with your shots… because it takes a lot more effort to get the clubhead moving at a rate that will send the ball over a green.

Adding weight to the heads will increase the swingweight … which for most iron sets is fine. D4 to D6 is fine also. Most irons come stock around D0 to D1. The overall weight of the club has much more to do with impact dynamics than swingweight.

13.5 even up to 14 should be fine with your woods also. Moe and Knudson were said to have used 16 ounce drivers.

Great pictures Paulsy…I’m sure the bat I had back in the day wasn’t a “Louisville”…and the handle size may have been a little bigger…says a lot about heavier gear pressuring dynamics of motion for the better.

Your picture also made me think of another cross-applicable situation. The picture has a couple of bikes in it. Back in the day bikes were very, very heavy…and perhaps wider, harder to start in motion, etc. Made me think that perhaps the heavier bike made it easier to find one’s optimal balance quicker versus today’s lighter bikes. Just a thought.

Oh, there out there but constantly on the move,deers,rabbits,coyotes,wild turkeys, etc…ha,ha. I tell my friends thats how I HUNT!!