The golf courses of Melbourne Australia are admired the world over by all the greats in every facet of golf- players, writers, designers
I thought I would post a bunch of photos of the great courses there for everyone’s enjoyment. The bunkering and different approach shots the courses offer are untouchable in the world of golf.
There are great areas of the world such as the Monterrey Peninsula and the links of Ireland, Scotland and England, but the Melbourne sandbelt is far and away the greatest collection of golf courses in the world in such a small area.
For those who have never been there- ENJOY 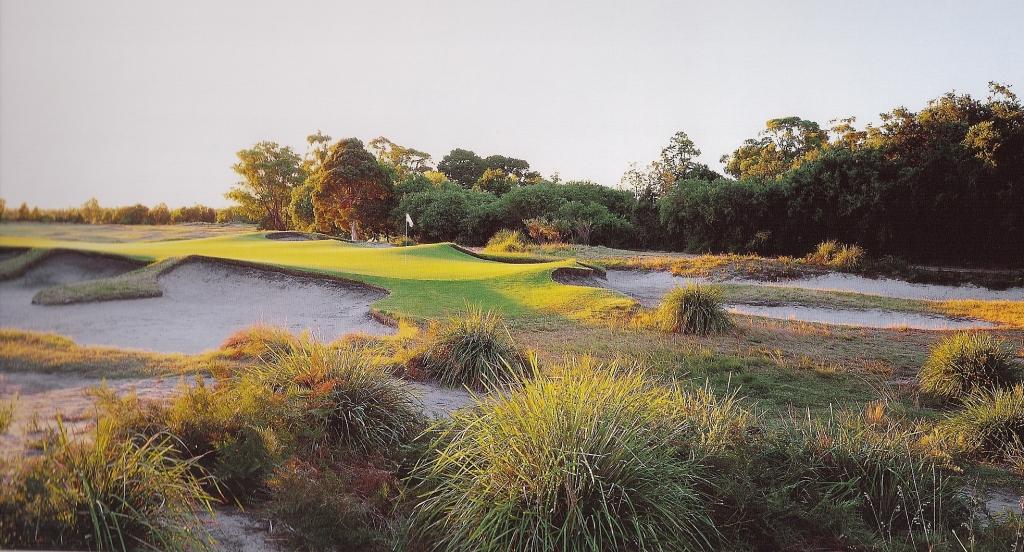 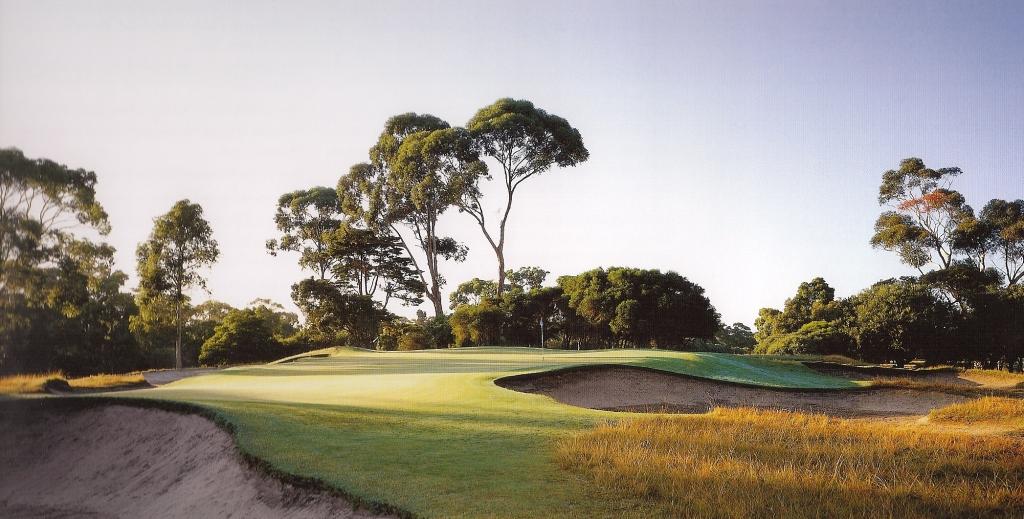 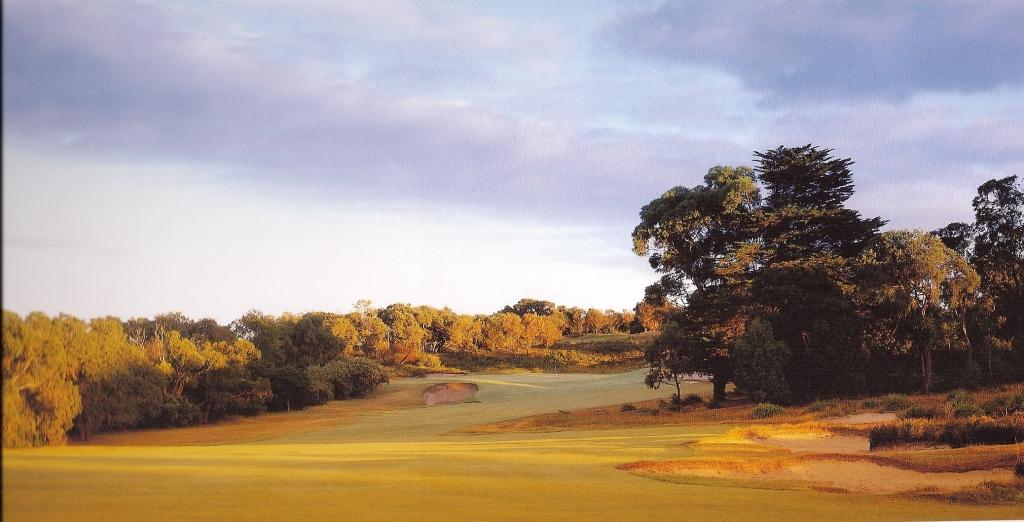 "Forty years of traveling the world playing professional golf has confirmed to me that the Sandbelt region region contains more championship courses than any other golfing destination. They have stood the test of time, and most great players have tried to tame them. Where else in the world can you stay in one location, play a championship golf course every day for a month, and not travel more than 25 kilometres? "
Bruce Devlin

“Nowhere in the world have I seen a group of golf courses as good as those occupying the Melbourne Sandbelt region. These are natural courses, influenced mainly by the MacKenzie look. As a designer, Dr. Alister MacKenzie was well ahead of his time. He had a wonderful gift that very few designers come close to these days”
Bill Dunk

The Sandbelt golf courses of Melbourne are famous throughout the international golfing fraternity. Having played in many places around the world, I am convinced that this great collection of golf courses cannot be surpassed. We are very fortunate"
Bob Shearer

Here is what awaits the golfer who tries to reach this hole in two shots.-- Beautiful contours and bunkering 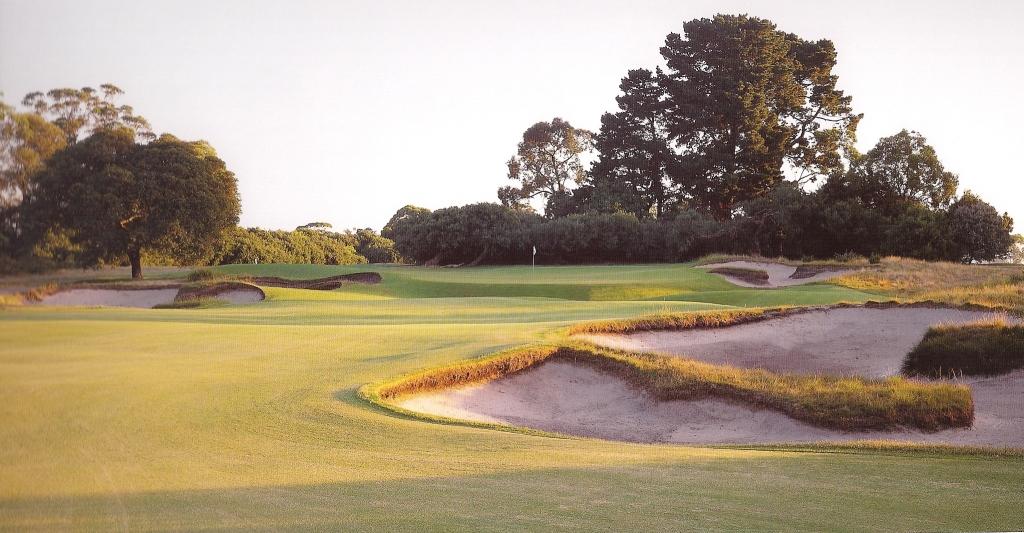 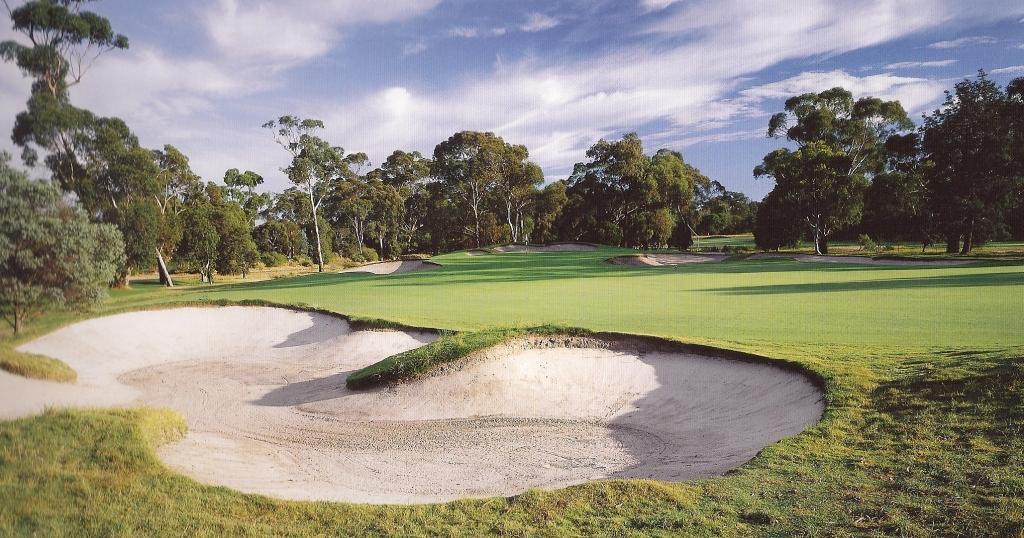 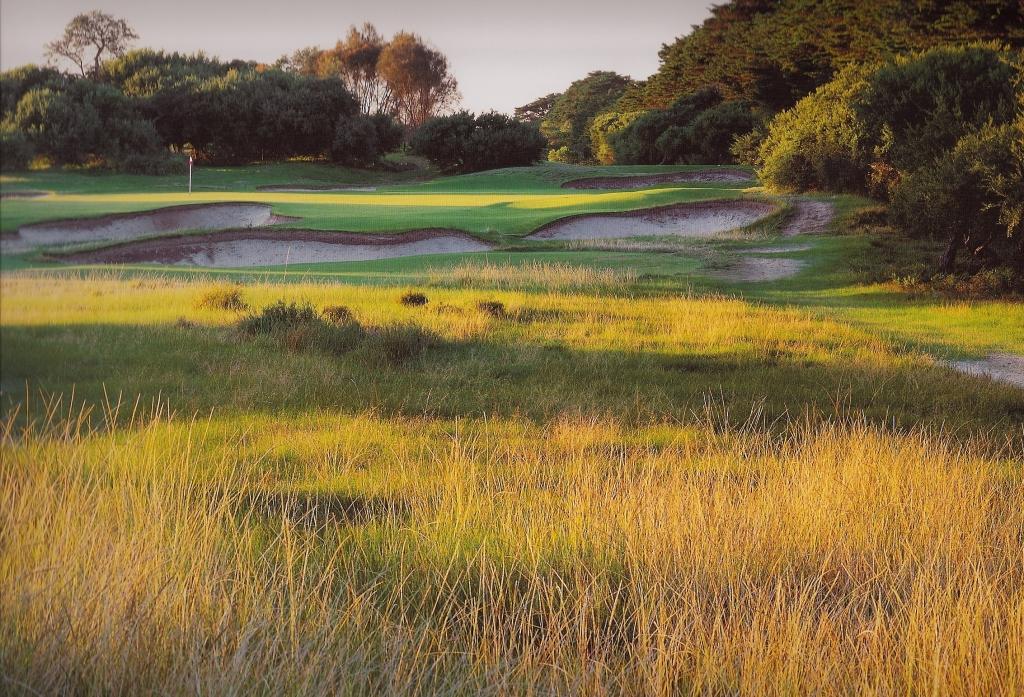 The “Sandbelt”, as it is referred to, receives it’s name from the sand based landscape the courses are built upon. The courses are very natural, produced with a horse and a scoop and the elements dictate the playing conditions with minimal water used to water the fairways and surroundings…Just let nature take it’s course.
Dr. Alister MacKenzie stamped his name on many of these courses during a tour to Australia in the 1920’s as he re-designed the existing layouts and excavated the greatest bunkers seen on any golf courses in the world. The bunkers consist of a firm base with a thin layer of sand that permits wayward shots to roll around the faces of the bunkers and settle in the base. They are deep but fair and beautiful to look at even though they are considered a hazard. Buried lies are pretty much non existent, but that does not diminish the challenges faced when confronting a shot from one of these yawning chasms.
The greens are normally very fast, probably as fast as anywhere in the world on a daily basis. Yet the attraction of the Sandbelt is the playability. The courses have all stood up to the challenges of professional golfers the world over who have graced their fairways, yet still offer the average or beginner golfer a unique experience by offering them options on each hole unlike most of today’s ‘supercharged’ courses that are far too difficult for everyone bar the highly skilled professional.
Even the most severe rainstorm residue will disappear and soak into the sand based ground and golf can be played again almost immediately without the player even realizing that the area they are playing was puddled with water 30 minutes earlier.
The fairways are lined with gum trees and a low scrub called ‘tea-tree’, which makes accuracy a premium otherwise you had better bring plenty of golf balls with you. The courses are not tricked up with water hazards or railroad ties…just pure golf with visual challenges.
The “Sandbelt” is considered by many to comprise of Royal Melbourne, Kingston Heath, Metropolitan, Commonwealth, Victoria, Yarra Yarra and Huntingdale golf clubs. You could almost throw a blanket over the proximity of these 7 courses which is the main reason they are considered as THE Sandbelt. There are however many other courses in Melbourne within a 20 mile radius that are world quality courses with a sand base and the look of the other sandbelt courses. Why courses such as Peninsula, Long Island, Woodlands, Kingswood, Spring Valley are left out of Sandbelt discussion probably has more to do with the fact that they haven’t staged high profile events but they are all works of art to some degree and certainly shouldn’t be left out of any talk about the great courses of Melbourne.
For those who haven’t played in Melbourne…St.Andrews is the home of golf…Augusta is the mecca of golf…Pebble Beach is the beauty of golf…but the Sandbelt is golf at it’s finest

Another great example of the bunker design on the sandbelt. You can see the firm edges that repel the ball down onto the flat area of the bunker. This design would certainly save on raking time for the ground staff as they don’t have to rake the harder edges of the bunkers , only the lower playing area where the sand is. 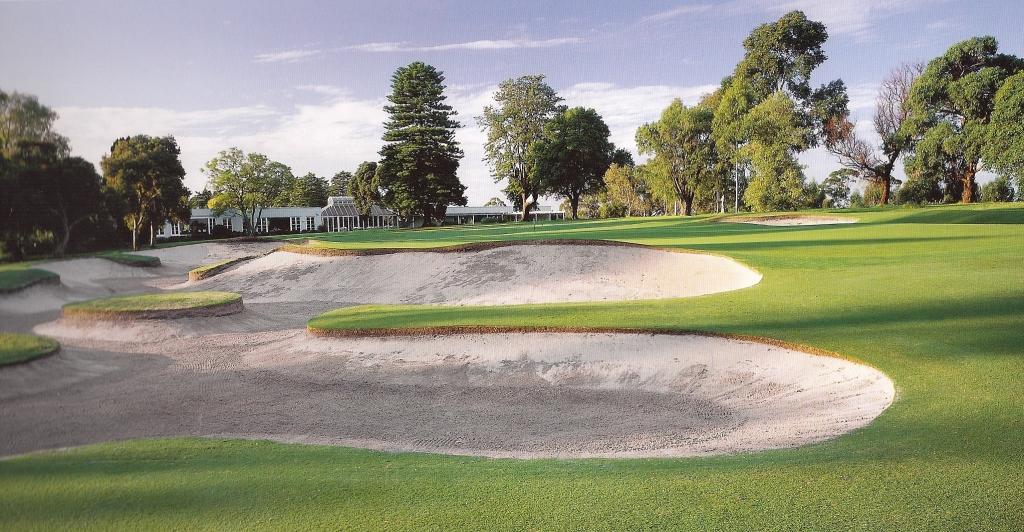 A small target with trees protecting the both sides of the hole. The wind can really play havoc with the ball once it gets past the trees as the direction and strength of the wind is difficult to judge when standing on the tee. 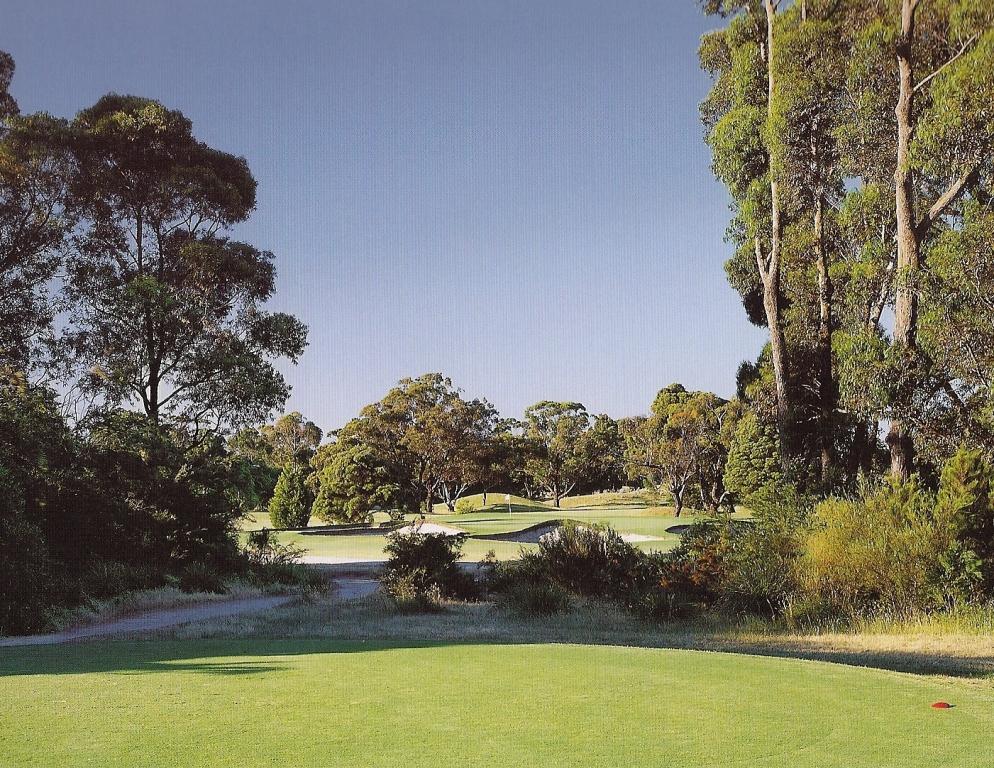 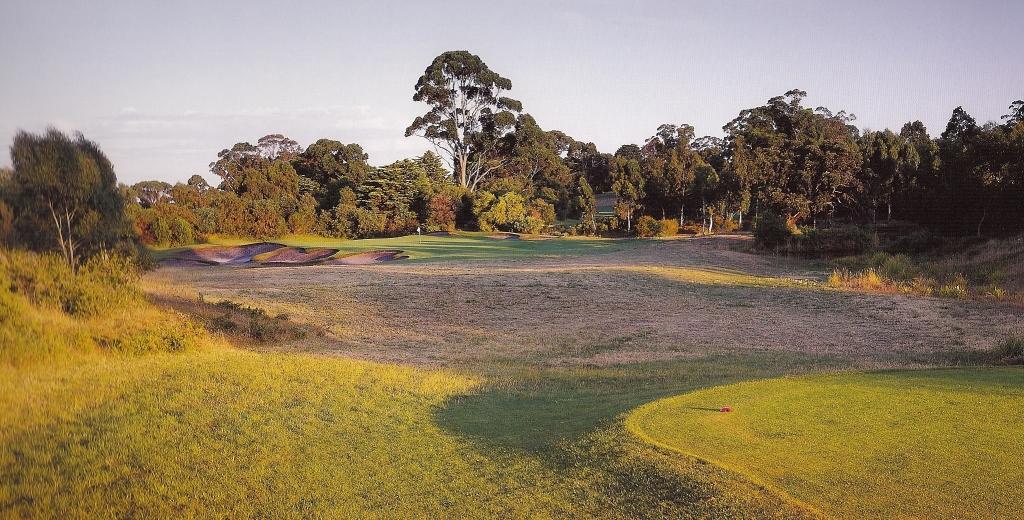 This hole used to be the 8th of the composite course. They recently re routed the holes and it became the 12th (due to the Presidents Cup in 1998) - Why I don’t know, it was much better when played in it’s previous sequence. When an event is played at Royal Melbourne they entwine holes from both the east and the west course to keep all 18 holes inside the one main gated area, as the east and west courses on their own stretch across local roads and would provide a logistic nightmare to get player’s and fans around the course by crossing roads.

One of the absolute best short par 4 holes in the world. It makes you wonder why every hole has to be set at 450 yards or more by todays’ course designers.
Attempt to drive the green at your own risk…tea tree all around to gobble up an errant drive. A huge bunker awaits the mishit drive. There are deep bunkers just over the green to the right of the flag which provide difficulty. A swale short of the green to repel a drive that doesn’t have quite enough strength to reach. Sand and scrub short left to provide difficulty for a short chip shot if you decide to attack.
The hole is best played with a long iron straight up the fairway which leaves a pitch shot of approx 60 yards back up the throat of the green. This opens up the angle of approach to the green and provides a safe route without much risk.
The elements of weather come into play. A truly magnificent hole that shows the ART of true golf design.— providing options for all skill levels 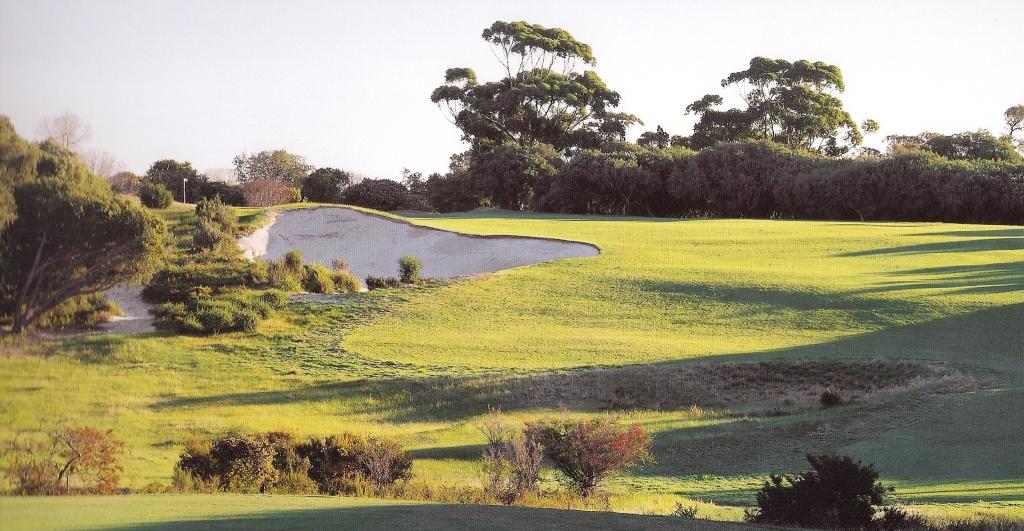 Two,
Thanks for posting these great images.
Can’t find the words to say how potent their impact is.

A great par 3. A slightly uphill tee shot with the elevated green just out of full view.The green gives the player the run up option to the right side. When the pin position is left like on tournament days, you had better take enough club to carry the left bunker otherwise your next shot will be tough and a certain bogey will result. Safe way to play is a slight draw up the front right side and allow the green to release the ball and give yourself a 20-30 foot putt for birdie. No need to be greedy here- Par is a good score 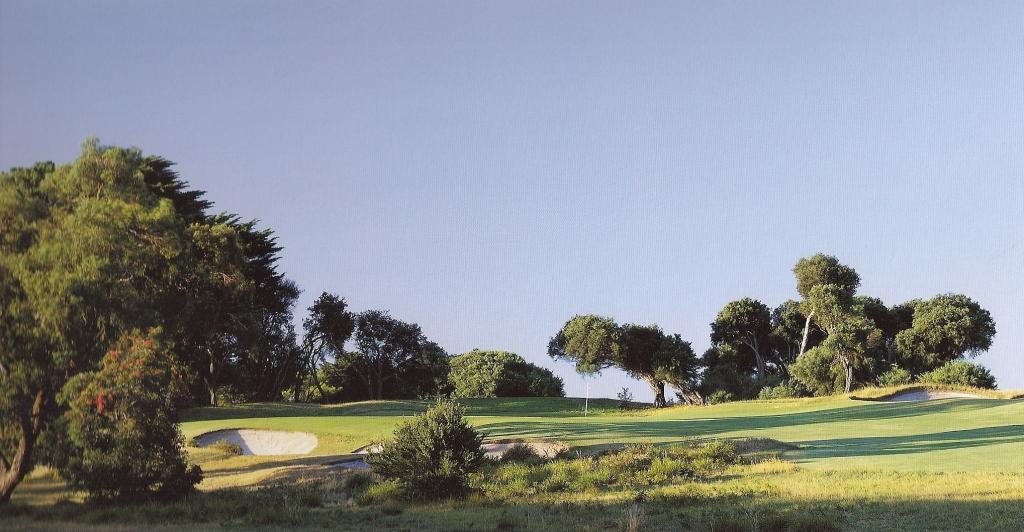 IT DOESN’T GET ANY BETTER- Nick Faldo

" When I was winning major championships in the late 1980’s and early 1990’s, a section of the media chastised me for not laughing or smiling enough on the golf course. ‘It’s no laughing matter’, I would tell them. ‘The more I smile the less I concentrate, but don’t worry, I smile when I go home and look in the trophy cabinet’.
Well, I smile a lot more nowadays- both on and off the course. I certainly smile when i contemplate playing golf within Melbourne’s marvelous Sandbelt region, and I laugh inwardly whenever I hear Australians knocking the weather in Melbourne. ‘You should try living in England. We get all four seasons in one day also: winter, winter, winter and winter’.
For we golfers, the point about the climate is that it dictates the conditions we play in. And in my opinion the golfing conditions in Melbourne are just about perfect. Florida? Palm Springs?- No- nothing like as good. For one thing, the conditions are far too predictable. Moreover, Americans sometimes confuse the word ‘conditions’ with ‘conditioning’. The finest courses in the world are not necessarily the greenest or the prettiest and very rarely are they among the best groomed.
I think the best courses are the most ‘natural’ courses- those that integrate, or appear to integrate, seamlessly with their surroundings. Typically, these surroundings are sandy, scrubby and more rugged than pretty; and the presence or strength of the wind at such places is invariably a crucial factor.
The above description might seem like a definition of British linksland, but it describes the essential character of the Melbourne Sandbelt.
I confess I haven’t played as many of the Sandbelt courses as I would like to, and indeed intend to, but I feel I have got to know Royal Melbourne and Kingston Heath fairly well over the years.Both would make it into my personal top 10 list of favourite courses, and when my mind turns to golf course design, as it does increasingly so these days, no two layouts influence or inspire my thoughts more than those two.
I know I am not alone in believing that Kingston heath may have the best fairway and greenside bunkering in the world. I used the word ‘integrate’ above, and the way the bunkers here blend into and emerge from the adjacent native scrub is quite fascinating. By today’s standards, the acreage upon which Kingston Heath stands is almost ridiculously small, yet you would never know this when you play the course. I have also used the word ‘seamless’ and again it is appropriate; from the moment you tee off at Kingston Heath until you hole out on the 18th green, your mind focuses on nothing but the golf course and golfers. It is one splendid field of golf.
Royal Melbourne outscores Kingston Heath in almost every department. The immense scale and topography of the West Course in particular never fails to impress, although it is the level of strategy inherent in that course’s layout- inherent in just about every shot- that really sets it apart.
From the tee, the West Course is somewhat reminiscent of Augusta National in that the fairways are wide and undulating, yet there is always an optimal position to aim for. The green complexes, however, are more intricate at Royal Melbourne. Both courses sport magnificent putting surfaces, lightning fast and full of contour, but the greenside bunkers are far superior at Royal Melbourne, and the range of shots you can play onto and around the greens call for, I believe, a greater level of imagination and yes, strategy.
I’m not sure that I really want to nail my colours to the mast, but…the West Course at Royal Melbourne might just be THE BEST GOLF COURSE IN THE WORLD…period. "

Very high praise indeed…here is a photo of the West Course 2nd green area. A par 5 that is a regular birdie for the pros but disaster looms for any mishit from the tee all the way to the green. 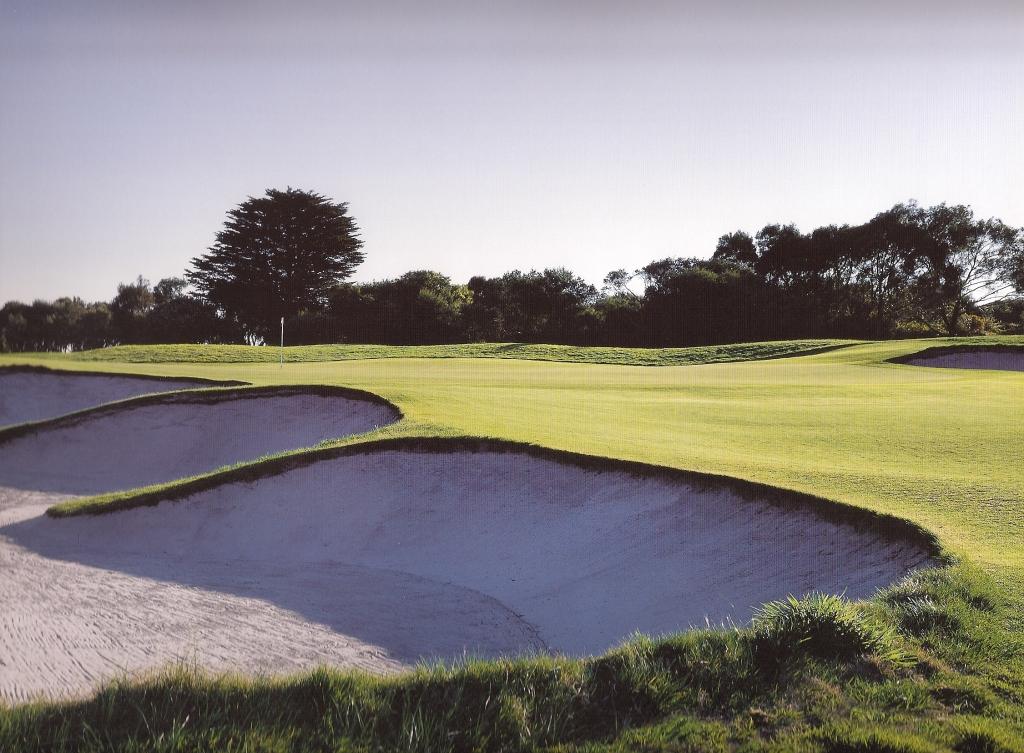