I found the website today and was very glad to see that they are still around:

Without any reservation the greatest golf bags ever made. Get ready for sticker shock, but a very few things in this life are worth it and this is most definitely one of them. I’ve had a black Jacobsen signature walker for pushing 15 years and when I go, this bag is going in the box with me. I figure I’d post the site on here, as over the years I’ve seen very few of them around and just today two people asked me about the bag while I was on the range. Probably walked about 20,000 miles with it slung backwards over my right shoulder, sometimes I catch myself leaning left a little without it… If the classic clubs are a great painting, this is the frame.

Probably not too badly priced when you consider $150 stand bags only last a season or two. Bit concerned about the weight of leather though–do you have all 14 in it lcdv?

I’ve never weighed it but I know it’s way lighter than the lightest PING stand bag. Maybe 3 lb total and balanced better than the rest, too. I can only carry a bag on the right side with my bad left knee, this is the only one that doesn’t make my shoulder hurt. I used to worry about setting it down on wet grass but all these years later it looks better than the new ones. Nothing like real patina. Plus they’ll put a monogram or logo on for free. The best warranty ever too, a friend sent an old bag in with a small tear for repair and they sent him a new bag. It was probably 7 years old at the time. Looking at the site the other day I could remember the smell when it was new. One of the best scents ever. Ask my wife, when I die this bag with my Hogans and a dozen Titleist 1’s and 3’s are going in the casket with me.

I must say I’m surprised - I would have never guessed it was light. It was that, the price and the awkwardness of lying it down compared to a stand bag that steered me away from the MacKenzies when I purchased a new stand bag earlier this year, but I’m getting sick of the poor quality from the major manufacturers.

So do you find it awkward that the bag doesn’t stand up, making changing club choices a bit painful or just generally picking it up?

Ping recently released a Sunday bag which has the strap always stands upwards I thought might be a good idea. 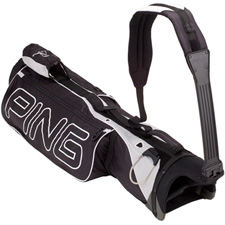 i have one of those ping bags. The standing strap is a clever innovation. It is very useful you can just pick the bag up without even having to bend your knees. I much prefer this over the old ping l8 bags with the stand. I used to hate the stupid feet of that bag.

On the pther hand i would trade my ping bag for a mackenzie walker without hesitation. Those bags look grest and like you say, they will most likely outlive all modern bags by at least 15 to 20 years.

Those Mackenzie bags are the ultimate. Having to lay your bag on the ground, or lean it up against something adds to the allure of vintage golf! Clubs get rattled a little, but back then we didn’t care. Reminds me of the ol’ Jones canvas bags. I ordered a Jones in 1984 with my name on it from my pro, still have it, think I gotta break it out next year. 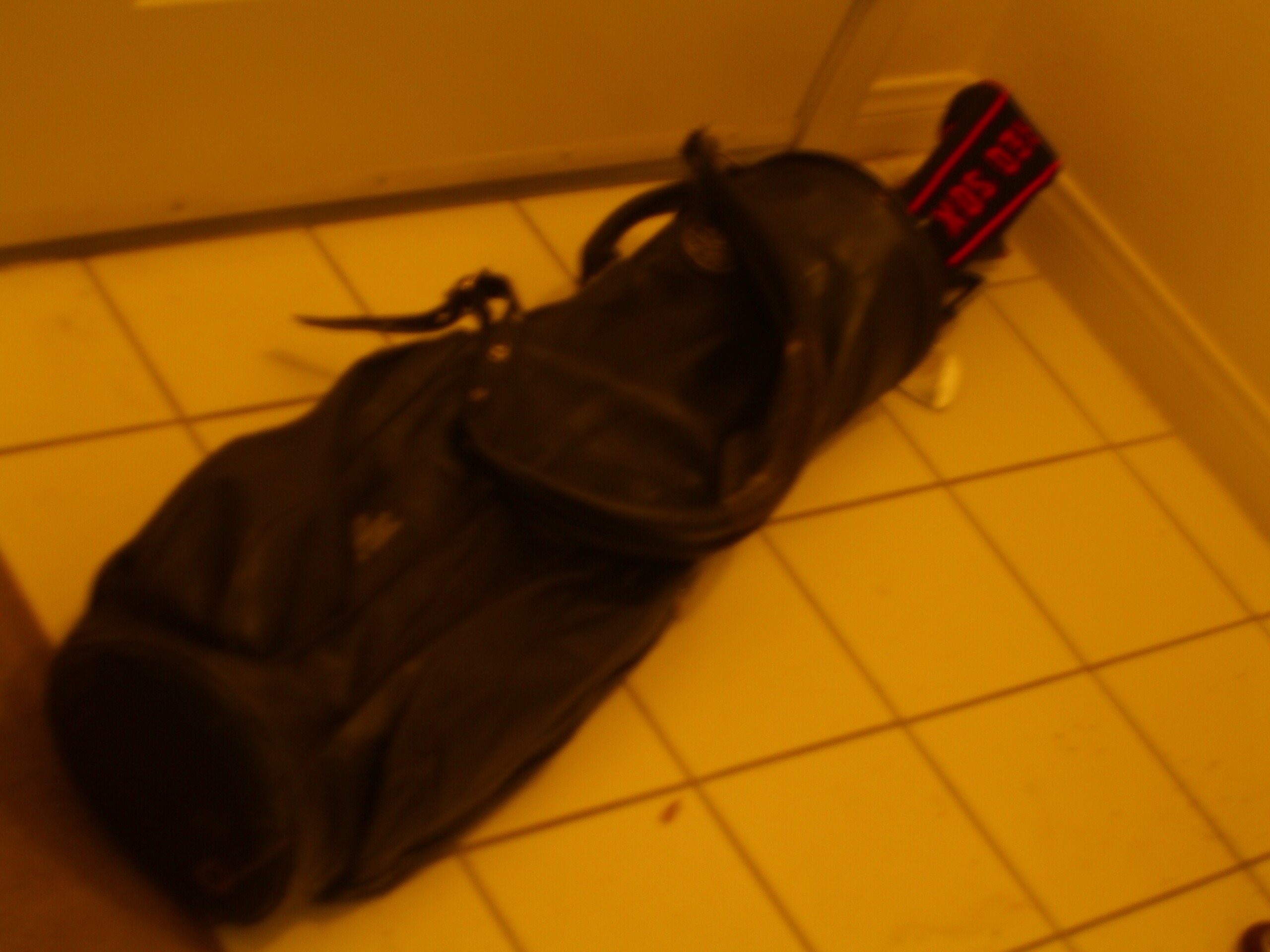 bad pic, I know. my stepson is gonna have to teach me how to do all this

Seriously, I hate Ping Bags. The feel of that paper thin plastic mesh nylon is like fingers on a chalkboard, EEEEEWWW!! And those aluminum legs are just asking to be bashed in. I bet you could fill a MAS*H unit with all the Ping Bags I’ve killed over the years. I remember one time playing up at Gonzaga I bashed the pocket with a 2 iron after I hit some gork way over wherever and broke 5 shafts under the grips. I had to play the last 12 holes with 9 clubs. Coach stopped replacing my bags after my Junior year and I had to play most of my Senior season with one with the old color scheme, no legs and duct tape over all the holes and the split in the base. It looked like it just got back from a 3rd tour of 'Nam. The best one though was a few years later when I put a brand new Polo Staff Bag through the wall of my Mom’s garage after returning from missing 3 cuts by 4 shots. It wedged through perfectly between two studs and nobody could get it out. It didn’t look too bad and I spackled around it and made it a little club storage spot. Could hardly keep from laughing on the phone to the RL staff dept to tell them my bag was ‘lost on the flight…’. Mom sold the house yeara ago, but I bet it’s still there.

That Mac Bag is probably the only one I’ve never struck or thrown in anger because it’s the only one I’ve ever loved. Perfect in every way, a labor of love the same way the Wood Bros Drivers are. A lot of times when I was playing events in strange, faraway lands like Florida and Texas I’d play the practice rounds hoofin’ that Mac bag and all 18 clubs I traveled with: Driver, 3 & 4 wood, 1-E, flanged PW, SW, LW and 2 putters so I could figure out the best setup for the tourney. No caddy or anything but that was the only bag I would dare do that with because the balance was so good and I could get the strap way up high on the big trapezius muscles away from the pressure points in my shoulder. Didn’t hurt that I was in really good shape but the 30 lb or so I was packing around however many miles right before I teed it up for real was a breeze. And the classic clubs just look like they belong in it. The standup strap is ok I guess but if you’re lazy like me just hook the strap with whatever club you got and pick it up with that. 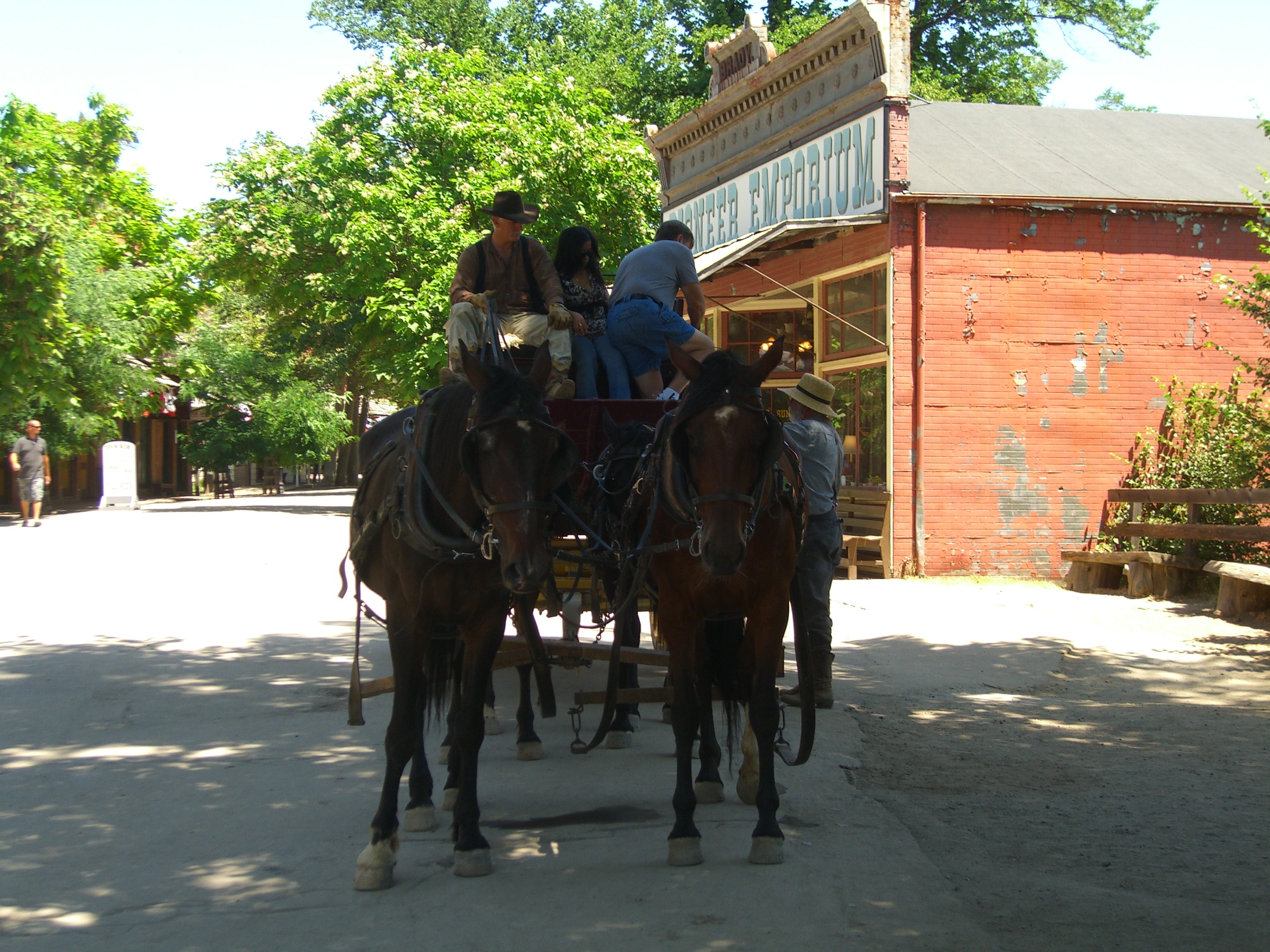 My hometown in Northern California. One of the pics we took while we were up there in June. I can’t imagine why everyone thinks I’m old school…

I picked up one of the canvas models they used to make years ago (I did a quick scan of the website but didn’t see any offered now). Haven’t used it in over a decade, but I may have to put it back into play. I loaded it up with my current set and was surprised at how comfortable it felt when slung over the shoulder. I always walk and have gone from Ping stand bags to Sunmountain’s latest lightweight mode. Although I like the double strap systems I find myself using just one a lot of the time anyway.

Nice, I had the canvas one too when they first came out, gave it to my cousin when I turned pro and got a pro price on the leather one. I think I paid 275 on cost+10 back in '96 when retail from them was like 485. I can’t tell what the first pic is, if it’s the divider come loose email Todd and arrange to send it to them. They make sure those bags will last FOREVER.

It’s made out of nylon rather than the heavy duty canvas but the $225 price tag is far kinder on the wallet. Still love the cow though, but anything MacKenzie makes will last at least 500 rounds. There’s a one pocket model of this one too.

Got myself a Llama!
Very good bag and very light, even compared to modern ‘light weight’ stuff.