Shackelford and Morri on the State of the Game

Insightful radio interview of Geoff Shackelford by Australian Golf Journalist Rod Morri. Rod was responsible for putting me on the cover of “Inside Social Golf” talking about persimmon and so forth in 2008.

Here is an except from the interview dealing with a common topic often discussed around here.

Thanks for posting the interview Lag

Also, Geoff’s article got a mention in this Saturday’s Wall Street Journal 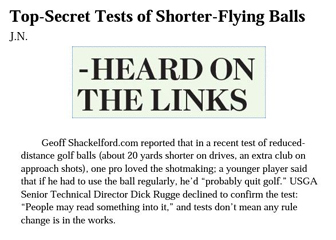 Whatever they “plan” on doing - they better do it in a reasonable and quick manner. If somebody wants to build a new golf course nowadays, or redesign their current golf course, all they are going for is length, to keep up with the technological advancements of the last decades. But every course that is built or redesigned under these principals will make it harder to realize a distance rollback, be it in golf balls or golf clubs.

The longer you build a golf course, the more expensive it is to be build and maintained. So whenever some of these marketing geniuses at a club or ball manufacture developes a new product that will make the ball go further, i assume that automatically means that in the longterm, the price for golf will go up. But if they wouldnt develop new products every 6 months, their shareholders wouldnt be to happy about it. That is some kind of devilish circle we are in…

The USGA -R and A will not be turning the game around anytime soon… that would be like asking an ocean liner to make a quick u turn. Rolling the game back needs to happen grass roots, or a smaller organization similar to what has gone on with TRGA.

I think the key is to get pros competing again with persimmon and blades on classic tracks. Spectators I think can warm up the idea of seeing real competition on courses similar to the ones they play, on less than perfect surfaces, and hitting the ball distances they can personally relate to.

Amateurs can be inspired by watching the pros. And even a $100,000 smaller purse still offers a $20,000 first prize which creates enough tension and drama for both the players and gallery to make an event exciting… especially given the thought that persimmon tour players might actually need the money to get to the next event. When I played on the Canadian Tour, there were guys sleeping in their cars at times, including Moe Norman. I suspect that most fans realize that the modern tour players are not really hungry in that way. Anyone getting a card will have enough endorsement money in the bank before they even tee off in the first event to buy their own Mc Mansion. I am not arguing that modern players are over paid, but I do think that with the vast amount of money out there, it does take away some of the game’s romanticism that can only really be found in “the trenches”

Too many players now are just playing for a good finish. There are players on the PGA that have made 5 million that have never won an event, and most would not recognize or even know their name.

The greatness of a game is best defined by it’s parameters. Chess has deeper articulations than checkers. Removing the finer points of golf makes it less of a game. More popular? maybe… Checkers may be more popular than Chess also… but that does not make it a better game.

Golf has always been popular… look at old photos and you will see big galleries in the era of Hogan and Snead, and even Jones and Hagen. How about Hogan’s ticker-tape parade in NY?