Can you talk a little about the snead_hip_key image with the squares on it? What’s the sideways block in front of his left thigh all about? Is that just the hands not getting too far out front?

In my talks with Al Barkow who knew Snead well enough for him to entrust the writing of his biography, Al told me that Snead’s knowledge of the swing was more than impressive. Any suggestion that Snead was just a home spun back country boy from West Virginia who just gripped it and ripped it… is simply not true. Snead really knew what he was doing and understood the golf swing. In my opinion Snead’s “Swing Keys” book is on a level with any instruction book including 5 Lessons.

The proper hip action is much better put forth in the illustrations here than in Five Lessons. Very delayed and paints a clearer picture than other books I have viewed on the topic.

It’s the acceleration of the torso just prior, through and beyond impact that gives the green light to “pour it on with the right hand” and really hit.

I want to get that book if it’s available. Is it still available? and what’s the title?

I want to get that book if it’s available. Is it still available? and what’s the title?

Maybe I’ve got the wrong book coming, but it’s called SS’s Key Approach for $7.34…I couldn’t resist to check it out

Snead had a lot of books out with his name on them. I think this one was his best most insightful work for the more
advanced players. It’s not a cryptic journey of vagueness like 5 Lessons.

Showed the box images of Snead to one who knows far more than me.

Hey Grandson, what do make of these mysterious little boxes with the keyholes in them.

Anything else you want to say about it…“No, just be done with it, lets go to Youtube to watch music videos.”

Learning moment here somewhere, just not sure of the beneficiary.

What a good book! I agree with Lag that this book should be right up there with 5L. I have read a few other SS books but this one is the best to me.

I haven’t seen an errata sheet is quite some time and posted it just in case it fell out on other copies. 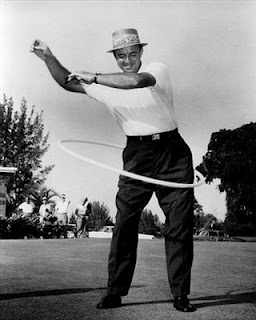 I love the Snead clock diagram describing huge shoulder turn and minimal hand travel! Whats got me wondering is how do you accomplish this concept when your left arm pit is glued to your side? Wouldn’t your arms and shoulders go equidistant with each other using the glued arm pit? Just a thought that has been on my mind for a long time!

Hope
The left arm need not be packed in on the way back or even at the top of the swing. Think of all those ‘funky’ backswings we have been told are no good…they are in fact quite ingenious and perfect for that person and how they need to get in transition and back in for final approach and exit.
We want the left arm/armpit to be pressured in tight into and through impact-that is the main ingredient- and for most players this will mean having some space and then packing it in. It is very hard to keep something pressured the entire way as it eventually gives out.
Lag and myself talk a lot about opposite forces and internal pressures and tensions. Don’t take it literally.

Trying to think some golf instruction you read and watch will drive you insane. That’s why we teach people what to feel -void of worrying about the look.Why we get people to do the work and not theorize too much about all the whys and whats. Lag and I have done all that for you. Drill baby Drill. The student then gets it and works it out themselves. Highlighted by the many post in the Lag Lightbulb thread where students talk about their experiences and what they eventually learn and feel.
Eventually the look of the golf swing that people drool over just pops up and is yours- once the body stations are intertwined in their working and the opposing forces and pressures all just fall into place with subconscious motion and not trying to do much of anything.

I think that was the best description I have ever heard concerning this topic!!! I have been studying Hogan since I was a boy and I had always strived for his theory of packed upper arms. When I would strive for Huge body turn my arms went crazy far back. The pictures that you showed me tell everything and that his arms were not packed in on the backswing but only through impact. This changes a lot for me cause now I can turn my shoulders like crazy and place my hands at my shoulder! I really appreciate your feedback.

There are big opposing forces created when we change the direction of the club. Some of the pressures land or accumulate in the feet and knees, some in our core, some in the shoulder or arm pit sockets and some in the hands, wrists and grip pressure points.

We teach that the body needs to have a strong cohesive tension… connection. As the change in direction happens, things compress. When the torso starts moving counter clockwise toward the target, the arms then compress into the armpit sockets. This pressure builds in a delayed way relative to the lower body and as Bradley describes builds to a peak through the strike. When the change in direction occurs, there is a delay in the movement of the hands… it gives a player a bit of extra time to get things lined up and in position before things head down into impact. If there is one thing I feel when I am striking the ball best it’s this.

The forces of impact are significant and we want to do all we can to resist any slowing down of the rotation of the pivot, shaft and golf club. This can also be assisted by our weight being shifted laterally through the strike… not shifted completely at transition as many are falsely instructed.

As far as Hogan and Five Lessons… the flatter you swing, the more pressure you will feel in the armpits at transition. Flat swings need lots of forearm rotation which Hogan had in spades. You can see the inward compression when viewing Hogan’s swing. With such a quick tempo which of course magnifies these pressures, it was critical to his swing that he had significant space there to compress into.

Two and Lag, thanks for this great explanation ! I have been trying to do exactly what you described : ‘packing the left arm tightly against the chest during rotation’ on the B/S and D/S , eventually during the downswing I can’t maintain that pressure and the club and arms eventually fly off… love the idea of creating some room and gradually tightening, compressing into impact. Working hard on MOD3 right now, hopefully and I can ingrain this feeling when drilling!