I have a set of blades which are too heavy and am thinking about trying to remove some deadweight (about 1/2 ounce on most clubs, 1 full ounce on 1 club).

They way I see it I have various options.

Think my prefered choice would be 5 and then 4 if required.

Any other Ideas? Anyone had to do this?

What about just adding butt weight? I’m sure you’ve most likely already thought about it though…

There’s no joke in there CC

Off the top of my head and without seeing what you are working with.

Your option 1 will decrease dead weight minimally, but will make things stiffer, which is ok if stiffer is what you are seeking.

Somewhere in these threads someone mentioned lopping off some of the hosel and re-bore the taper which I think is a great idea- although that will move the sweet area a touch.

I know this sounds goofy…but if you add weight, like a butt weighting, only this time just below the R hand, the deadweight will increase but it will feel lighter overall to move the club. Having more weight at the hands, or just below them, really gives some good feel…and you can then move the heavier club/mass faster.

That idea comes from Bom…who adds soldering wire around the shaft just adjacent to the R trigger finger.

I tried it and it works wonderfully.

Sure there are more options people will put up.

Mashie & Ratter, I have butt weights in right now.

Rat I think I remember someone saying that Johnny Miller used to saw length off the top of hosels to reduce the weight, that would be another option. Why would you need to re-bore the taper? Not sure I understand what you mean.? I find that reducing the Swing Weight by butt weighting reduces club head speed, but I’ve only tried it when the heads are already very heavy.

How heavy are we talking? An ounce is something like 28 grams, which is crazy. 2 grams is 1 SW point, as a rule of thumb.

then find yourself a lighter set… plenty of those around also.

then find yourself a lighter set… plenty of those around also.

out of curiosity, what are the clubs?

Epoxy weighs next to nothing, but there could be tip weights. If they are old blades, they are probably just built to a different “standard”.

What are the swingweights right now? How much do the buttweights weigh?

Its these MTs. Heavier than a heavy thing, but the 8 Iron is just off the map. 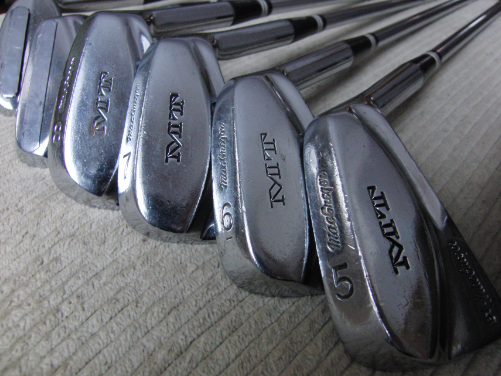 Will put some weights up later when I get a chance.

NRG, Are you sure you want to do this? Those seem like the perfect sticks

I find that butt weighting for me seems to increase swingspeed. For my set of (also very heavy) M85’s I added approx. 60 grams of lead to the butt end. Having more weight near the hands sure makes it easier to work the club around the body while the dead weight guards against over acceleration.

Don’t worry IOZ, I won’t mess them up, these were my favorite clubs before I added those extenders and butt weights, though I’ve just Lag spec’d some MT Split Soles which are new contenders.

I stripped down the 8 iron which was 519gms, removed the 20gm butt weights and the shaft extender which brough the weight down by 25gms.

Removed the head and all of the epoxy which went well up the length of the shaft and that was 10gms. Not totally suprised by that.

By the time I put everything back together with a dowel extender which is lighter that the previous one and a slightly lighter grip, it’s now 36gms lighter and D9 but still 10gms over Lags specs. Should be able to live with that with my huge forearm and wrist strength, If not I will sell them to someone stronger.