Recently on another thread, I had mentioned my newly-purchased set of MacGregor M85T irons (2-9 + matching Dual Service wedge rebuilt as a PW) that I recently had ABSed by Mike (mdrretired) via Lag, so I thought I’d talk a little more about them and post some photographs.

We all here know what a steal most purchases of vintage clubs are on Ebay, and these were no exception, especially because they recently underwent a total rebuild by The Iron Factory and came un-hit and in the original packaging as delivered by that outfit. Based on their most recent pricing list, I paid far less than half of what is termed a total rebuild (new Dynamic Gold steel shafts, grips, re-grooving, loft and lie set, balancing, polishing, blasting, re-chroming, repainting all lettering, and new ferrules).

Time will tell whether the re-chrome job will hold up (I have no intent of hanging them on the wall), but it doesn’t matter much at the moment as my investment of (1) purchase price, plus (2) getting them ABSed, is less than buying two new Ping metal “woods.”

In November 2011, Persimmon Golf Today had a nice overview of these classic clubs (that article includes all M85’s… MacGregor’s ‘T’ designation refers to cord grips).
persimmongolftoday.org/archives/548
As far as I can tell from the article, my M85T’s are likely from no earlier than 1951 and could be as late as 1953 but perhaps no later.

The noticeable features (borrowing from PGT) are the following…

The rebuilt version resulted in these additional features…

An added oddity is that each iron has the initials “BWH” stamped just below the ‘v’ on the back of the club. And, yes, I’ve checked: Hogan’s initials were ‘WBH’ not ‘BWH’.

But perhaps our own Twomasters’ middle name begins with a ‘W’?!?!?!?

When Mike got through working his magic, I had a set of clubs with flatter lie angles (ABS specs), and higher deadweights (ABS specs) and swingweights (E-0 to E-1, with the PW at E-8).

They are simply fantastic.

I gamed them this past weekend with LipOut and Nicelikejohnny, both of whom can really appreciate (and really game) the vintage stuff. We played at The Sea Ranch Golf Links up on the beautiful northern Sonoma County coast — we dubbed our outing the “Northern California ABS Invitational” with the marketing tag line “Where Nobody Finishes Lower Than 3rd Place.”

My kind of tournament.

What do I like about these clubs? First, the look they give me at address. The heads are small and low (especially the lower-lofted ones), and that thick topline makes you feel secure that you have something substantial down the other end of the shaft (LipOut appropriately described them as having little hammer heads).

They just simply look perfect to my eye, for me, which is somewhat of a surprise given the small head size (they are really small). A club with visuals that put you at ease at address is half the battle sometimes.

Second, they give you that proper feedback, but it really isn’t hard at all to find the sweet spot. And when you do, it’s pretty sweet.

Fourth, the ball flight is usually noticeably lower than other irons I play or have played. And I love golf when it is played close to the ground. It is just a personal preference that I’ve had for a very long time, probably influenced by my Dad’s points of view, but also from my experience of following Lee Trevino in the 4th round of the 1974 PGA Championship and watching him hit one low laser after another to take the trophy by one stroke over Nicklaus.

Most importantly, I seem (so far) to be able to hit them really well, which out of the gate gives me confidence.

And, in a totally unrelated Ebay purchase, I was able to obtain a MacGregor M3 Colokrom putter, which also looks to have been refurbished/rechromed. As you can see from the photos, it visually goes quite nicely with the irons. But after gaming it, I think a significantly lower lie angle (and perhaps a bit of loft) might be in order.

It’s a bit funky, but I’m going to give it a proper try.

Enjoy the pics I recently took over the last several days… 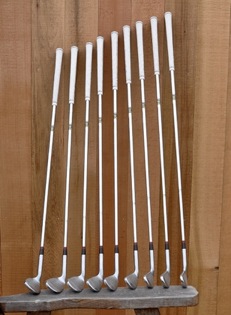 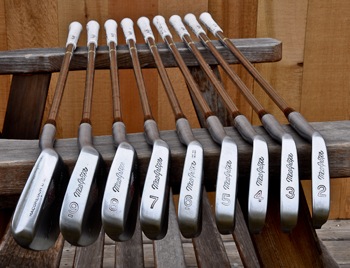 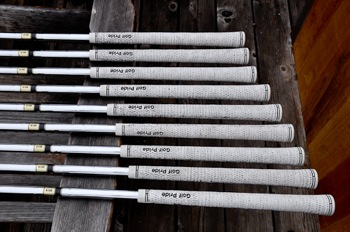 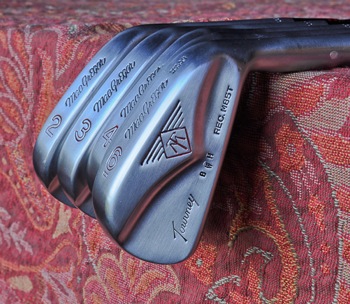 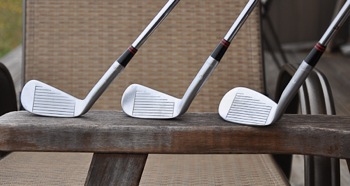 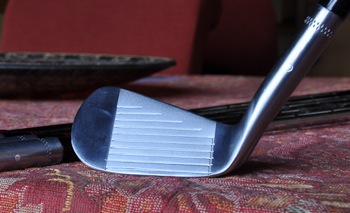 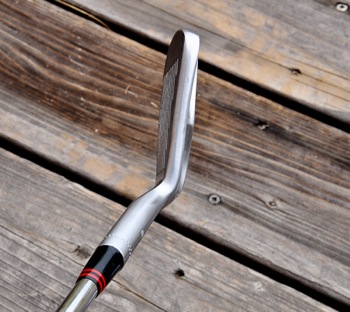 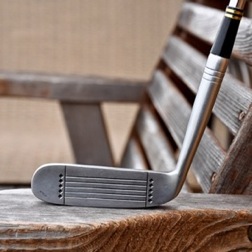 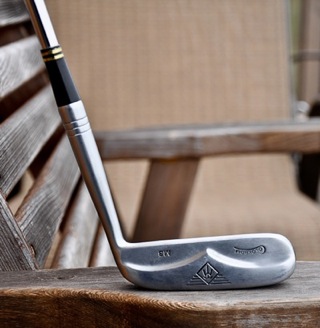 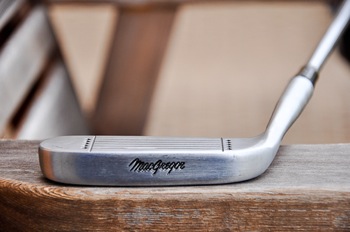 Wow, fantastic set of clubs! I would be obscenely proud of those things. Good job!