Putting together a Vintage bag!

Would appreciate the views of the traditional brigade on the best way to go for a new playing set I am hoping to put together.

Always played blades and persimmon but normally newish versions (Louisville woods / Maruman irons).
I am keen to go truely vintage and embrase the tradional clubs of the 50’s - 70’s. (I already have a set of playing hickories so not that far back before anyone suggests it!!)

Am thinking along the lines of early hogans/Aussie blades/FG17’s etc for the irons and a couple of Macregor woods from the 60’s / 70’s heyday of blocks.
Would be interested to hear thoughts on recommended set ups from your previous experiences.

What thoughts are then on keeping the clubs as original as possible or replacing shafts etc?
Cheers
Chris

My advice for irons would be to pay special attention to the shafts when you are browsing for purchases. There are lots of great looking vintage irons with shafts that won’t work for you because they’re aluminum or not stiff enough. It’s so much easier and cheaper to find a vintage set in the right flex, adjust lies and add tape and change grips if needed… $50 - $150 bucks. But if you get a great set with the wrong flex you will need to buy new shafts, pay for labor to replace, then pay for grips and lie adjustments…you might be closer to $300 bucks and it will take a lot longer.

Good advice from LipOut on the shaft front. At the end of the day there is no substitute for a little experimentation to find exactly what you like. Luckily old clubs are pretty cheap on ebay so buying and selling on is not too difficult. Though some of us find the buying part easier than the selling

I think the consensus is you won’t go too far wrong with any Wilson Dynapower iron from the late 50’s to early 70’s (1959 and 1962 Turfriders are my favourites) or many of the Hogan blades through to the 80’s. Plenty of good MacGregor blades as well of course. But thats just the start and you u can see all sorts of wondrous purchases made by forum users in this thread:

Similar with persimmons I guess you would get lots of votes for early 50’s Macs (M85’s etc), Toney Pennas, Harry Bussons and so on. I have lots of these if you want to take a look, have a hit to find out what you like.

I have played vintage clubs with both modern and vintage steel shafts. Nothing to be scared of either way as long as you are prudent re: condition, sometimes a little luck involved as well 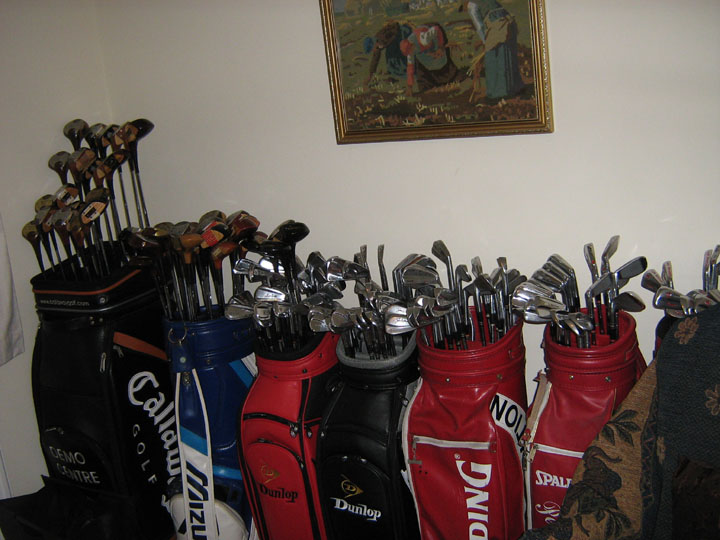 are those all your sets now? And those classic tour bags? wow…

Wow Arnie, I thought you would have more than that.

Off the top of my head in my loft I have

And about a dozen or Persimmons all with the shafts pulled out, waiting for the winter.

You have got to love ebay.

Thanks for the advise guys… sent you a pm Arnie… great looking collection you have going!!

Hmmm just added mine up -

worse than I thought, running out of places to hide them!

Well that’s pissed on my chips!

What a listing. Certainly very impressive!

You didn’t even cover your persimmon collection yet. I am guessing that is an upcoming attraction?

Let’s see, with a $100 entry fee, deduct green fees, and a cod and chips lunch, that still leaves you $1000 profit, which pays for most of the gear in one shot…but of course, not the van to move the gear around… but that’s coming soon!

I think that’s the pitch to the Mrs… to keep the collection moving forward!

Interesting Arnie that you ONLY have 3 sets of Hogans. Is that cause the Hogans often go for a lot more than the others? I managed to get most of my now rubbish collection for about £30 - £45 (some as little as a tenner), but paid about £180 for my first set of Directors.

Interesting Arnie that you ONLY have 3 sets of Hogans. Is that cause the Hogans often go for a lot more than the others? I managed to get most of my now rubbish collection for about £30 - £45 (some as little as a tenner), but paid about £180 for my first set of Directors.

I think I missed one set of Hogans out as I was recently given a set of 35th Anniversary Hogans (Apex 4) that were originally made for the Japanese market I believe. They were given to me by a good older player at my club who knew about my fetish for persimmon and blades. He said they were gathering dust in his closet and he would rather someone who appreciated them had them. I tried to persuade him to take them out for one last round but he was convinced that he wouldn’t be able to hit them any more. He is a good player who can still shoot par on occasion in his 60’s so I have no doubt that he would have been able to make them sing…shame really…

The Apex Redlines have apex 3 shafts in and I think were a £30 ebay pick up or similar. The 73 Apex and the PCs came over from the US and cost quite a bit more. I would really like to have a set of Bounce Sole +1s with Apex 4 shafts but they don’t come up much over here. Richie3Jack swears by the PC5’s and the Powerthrusts always look fun so both would also be on my long list.

Arnie
Did you say Bounce Soles? 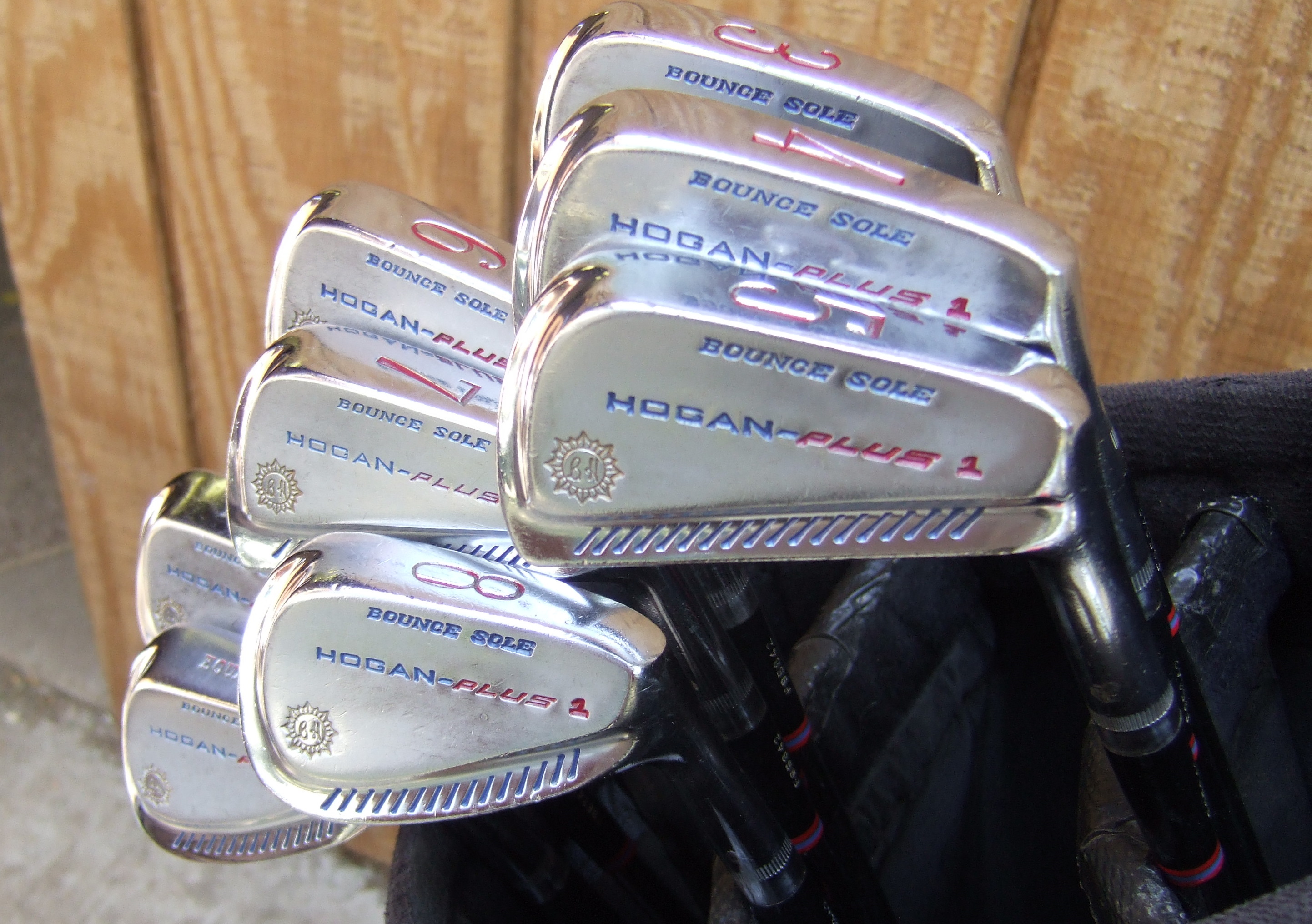 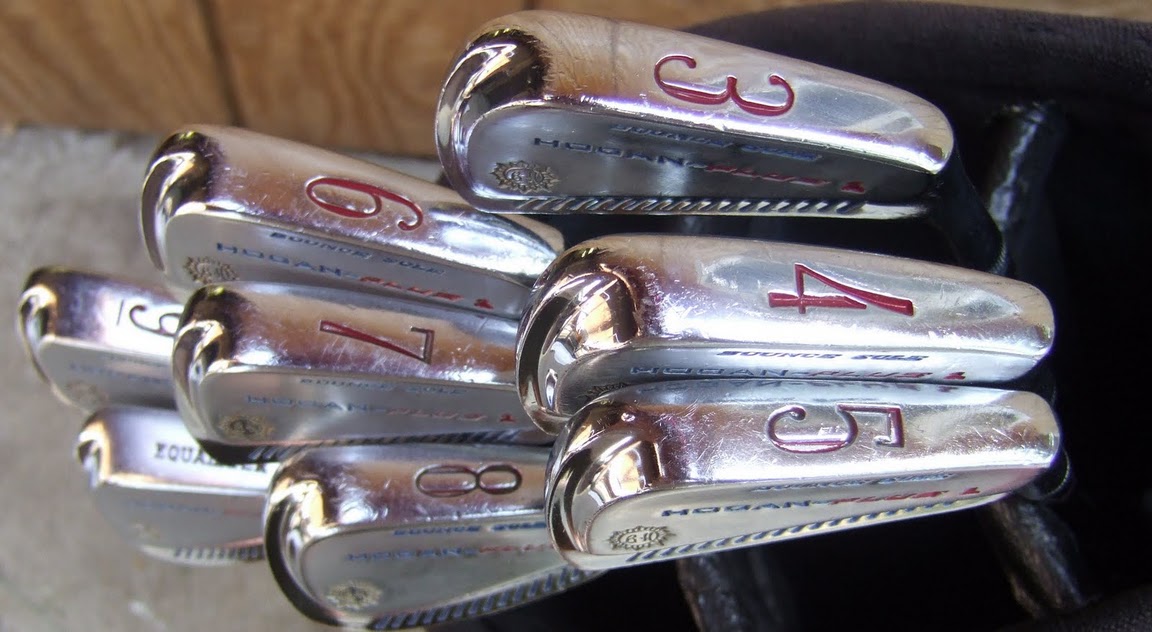 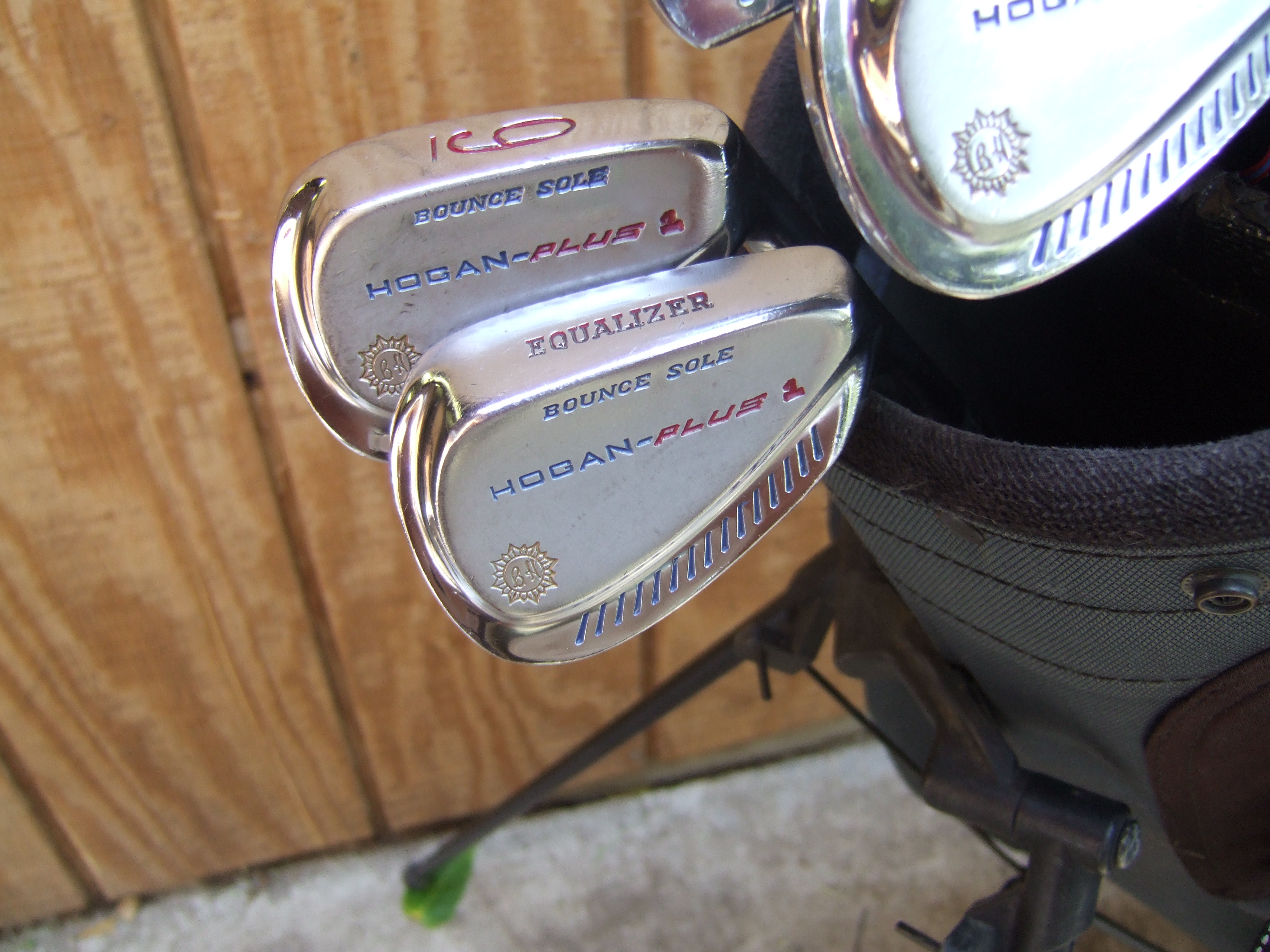 and the grooves? they look like they have played about 10 rounds!
sweet huh?

Very nice Bent…are they for sale

Very nice Bent…are they for sale

AA
you are a funny man!!! But IF IF IF
I ever think about selling them, you will be the first to know…

Hey AA,
those are nice looking irons indeed - when googling them i found this place who sells single irons (pretty cheap imo.). They dont seem to have a complete set with the same shaft but maybe you find something you like:
ironfinder.com/Individual-Ir … s_1-68.htm