Great to see one of the poster boys for this course making a good start to his seniors career. Peter Senior turned 50 on July 21 and has already chalked up a 4th and a 2nd in his first two starts on the European Senior Tour. Was 4 ahead at the start of yesterdays final round but despite hitting 18 greens in regulation he was pipped by a shot by Tony Johnstone whose putter was as hot as Seniors was cold in his final round 66. Also great to see Johnstone back in the winners circle as well for a second win since being diagnosed with MS.

Hopefully they will both be back here in the UK next year, I would love to go and see them in the flesh.

You’re understating it when you say Senior’s putter was cold Arnie.

PS hit all 18 greens but only managed a one under par 71.

He had 35 goes with the flat stick although watching him last night I have to say he makes that long putter look absolutely hideous.

I didn’t see it myself, just followed the result on the net. Where do they show the European Seniors Golf, could see who was broadcasting it when I looked?

Not quite sure, it was a highlight show on Sky sports that I seen it - late on Sunday evening

I’m playing in the pro-am for Peter Senior’s debut in The Legends Tour next week willowsgolfresort.com/content/view/92/855/. I am pulling every string to get into Peter’s group. If I don’t get him, Roger Davis would be a nice 2nd prize. But just to be around these guys for a day will be a bonus.

sounds fun…
keep us posted, and if you draw him… enjoy the sound of true compression… it really is different.

Hi everyone, first time poster here
It’s a funny thing, rather than fanatically following Norman in the 80’s and 90’s, I was always was drawn to the way Peter Senior hit a golf ball. Was this an unknown, unconscious thing - ‘compression’ - that i would be striving to find myself all these years later? Maybe because I didnt really get to see Greg perform on the world stage, but Senior always seemed to be in contention in the aussie tournaments on tv
Whatever it was it intrigued me at the time, and it would appear that a lot of the old magic still exists…

Didn’t get to play with Peter - my pro was a guy called Peter Criss (not the Kiss drummer!) who just happened to be a member of my old club, Long Reef, when I used to play there so lot’s of swapped stories.

But I did run into Peter Senior twice on parallel fairways. The first time he was 190m out on a par 3 with a 4 iron in hand. I gathered my group around and told them they are about to see a shot from a ball striking master. A quick chat with a very friendly Mr Senior to get his impression of the shot he was about to play - he takes his stance, swings (hits?) into the ball and it prceeds to take a small hop and run 40 yards down the fairway. Was he playing for position for his 3rd or was it a near whiff? The head in the hands gave the answer. He was kind enough to wait to watch me put a 6 iron onto a small par 3 green. Then this same sort of thing happened a few holes later. He hit such a poor 3-iron he looked like a 36 handicapper - and it’s an awful looking swing when it goes wrong!

Today is the last day of the tournament and he’s probably leading by 3 shots (if I find the result I’ll let you know).

Looks like he shot 66, 67 to win by 4 so I think you must have caught him on a rare off moment! Given how he hit it when you saw him I don’t reckon you are going to be top ogf the list for caddy duties

I guess it just shows golf is always humbling even for those who have come closest to mastering the golf ball.

That is seriously uncanny. The report says he hit the 2nd and 5th in 2 and those were the two holes where he duffed his 2nd shot when we were watching. And my prediction that he’d probably kill them in the real thing came true. A bit like the guy who wins the Friday chook run and gets clobbered in Saturday’s Monthly Medal (and visa versa).

It appears that most of these guys were led astray by Roger Davis who holds court at the bar until the barman calls “time” rather late (or is that early next morning?).

Thanks for the link as I’ve been trying to find the results.

The guys is unbelievable. He turned 50 on 31 July and then as far as I can tell started off like this:

Must be fun to be him right now

Based on Lag’s inputs from many month’s back, there is no surprise here!

Talk about flying under the radar! Senior seems to be a classic example and I suspect we’ll be hearing the announcers on TGC covering the Champions Tour using his name often. 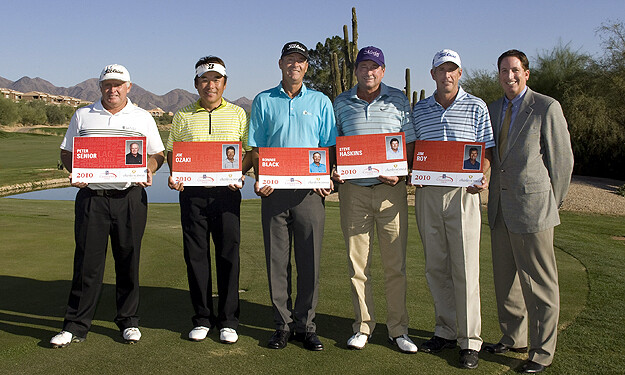 The Golf Channel Champions Tour coverage sure is going to be fun to watch in 2010!

I can’t think of anyone who swings the club more like Hogan and Knudson did since the 1960’s than Peter Senior. Having a great golf swing is not the only factor in being a top tier tour player, but is certainly doesn’t hurt. It’s nice to be around the hole more often than not. Senior has always been a flusher. When his putter is working half way decent, he’s tough to beat.
He’s also a guy who wouldn’t have any issues playing gear from any era. He’d have even a bigger advantage if the gear was rolled back. It’s nice to see him still playing a decent schedule… and getting his SPGA card here is no surprise to me.

In the award Peter is holding… what does it seem to say right after his name? or am I only seeing things…?

No, I don’t think you are seeing things, LAG… some might call it Karma.
Cheers to you…