Anyone have any opinion if these are desirable or not by ABS standards,
My blades sets are 80’s and early 90’s…hardly vintage gear…
Thought these might be worth getting off of ebay… look to be in pretty decent shape…

here are some pics 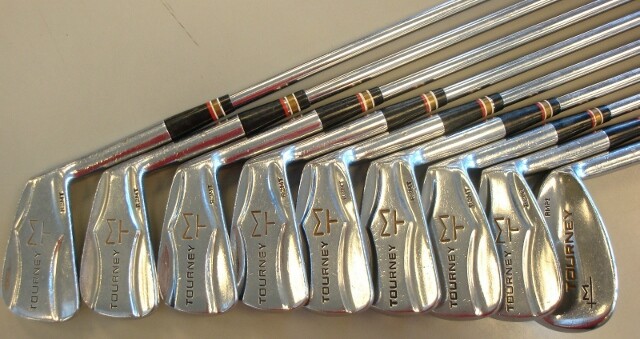 those look pretty nice, esp for the price. not sure of the year but i would guess early 60’s maybe even late 50’s so they should be nice and
heavy. nice long necks too, that makes them easy to work on. looks like the have pins so they have to be pretty old, i don’t think mac did
much past the early 60’s. according to lag, those shafts are not the stiffest that they made but still pretty stiff, kinda like dg s300 if i remember correctly.
thoes are propel 2, lag and others like the propel 1’s that are really stiff-like x-stiff plus some. probably too stiff for me at this time

one warning with the old stuff, they will usually be all over the place regarding loft, lie etc from getting hit around
over the years. i just bought some wilsons from the 60’s and some are way upright and some lie perfectly. some have no
offset some have too much offset but you should be doing some work to them anyway to get them a little flatter so you can
straighten them out all the same.

Thanks,
I found a young guy at a local golf shop who is really getting into bending
stuff as I request, without the usual silly comments…maybe a future ABS 'er !
He is busy removing the offset from some mizunos, we’ll see how they turn out !
I may pick these up and reshaft, pretty comfortable doing irons so far…maybe some KBS
125-130 G. Tours flex shaft would be a good fit…

have a good one
Dale

not sure why you would put $200 worth of shafts in them, i’d at least try them with the propels. if your going to spend that much i
would just pick up one of lags abs spec sets.

i have about 10 sets of blades now and not alot of money invested in them, avg $30-35 bucks each. i’ll buy sets out of a thrift store for $10 just for
the shafts if they have some dynamic golds in the them. so i can get 8 dg’s for $10 total vs. the current price which is $13-14/each.
i even bought a set of crappy irons for $4 because they had some kickass old golf pride classic cord grips that were in great shape. took the grips off and threw out the shafts and heads. those grips are gonna look real nice on my 1961 hogan power thrusts that i bought for $8.

this is all just my opinion, i’m one cheap bastard (my wife will vouch on that one) but i’d rather save my money on clubs and spend it on modules…

They are 1967 MT tourneys with the 2 standing for the regular shaft. These clubs would not be my chose of club to play from that era in the MacGregor line. The 67-68 VIP would be the best followed by the 65 Tommy Armour. Some of the othr MT models that came before this were good one but this started the time period when Macgregor we not making as good of clubs as they hade prior and some that came later in the 80’s in my opinion

Interesting, for 20.00 I could hardly go wrong, thanks for the feedback…
Lag was saying the propel 2’s were like todays stiff offerings…
Anyhow they look heavy and the faces are in really good shape.
I’'l bend em and hit , I do have a set of muirfields , they do look lot cleaner … and I have and ebay search
to notify me when some VIPS hit the market, I am looking for some '67 -'68 just like you mentioned.

The Propel 2 was listed by Macgregor as a medium/stiff. I found it to play slightly stiffer than an R but not an S. The Propel shaft itself had a low kick point which produces a higher lauch. It was a shaft similar to a TT Jet Step which was on the other end of the shaft spectrum of say a dynamic which had a high kick point and lower ball flight. The high kick point tends to be geared toward acuracy with the lower kick point geared toward helping one get the ball airborn. I think the Propell feels a little softer to the hands when hitting the ball. I liked the Propel in the woods especially in fairway woods like the Eye-O matic 60s. I liked the Tourney Shaft that came with the Armours. It is very close if not the same as the ND Tour shaft True Temper mad and used by many a Tour players of that era.

DNA,
welcome to the forum here. It’s nice to have another around here that understands the vintage stuff and in many ways, why it was better.

DNA thanks. For the tutorial
It will interesting to see the ball flight and feel
Of these since it will be my first pre70’s set