Ok, I’ve jettisoned my newer clubs for older blades as you may have read. Now I think I’m in the market for some older wedges and persimmon to compliment. I have some Wilson 4300 Staff- 1100 woods that came with the Dynas, but not sure what other interesting things may be out there.

I have a Hogan SureOn sand wedge, but not sure I like the “bulgy” look. Any suggestions on what to look for on sw or woods?

Or should I just stay with the Titleist wedges I have now? I like them well enough…
Thanks

Those Hogan wedges are good, I liked them for pitching and fluffy bunkers, but once the ground firms up–beware-- they have a lot of bounce on them

As for woods I would look at something with a smaller head. They tend to be heavier swingweight than the T-Rex’s they tend to make nowadays and also more in tune with the smaller blade head you are using

There is a ton of good persimmon around on ebay. The 50’s Macgregors still play very well. The most famous models I think are the 693, MO9 LFF, M85 and 945. Other ideas would be:

Personally I have always prefer the pre-1995 stuff as some of the modern persimmon has followed the lightweight route. Here are some pics of my colleaction that i can’t resist showing off at every opportunity

The best advice Lag gave me when i was starting off was to find something with a decent stiff shaft, though if you are planning to rebore flat that may not be such an issue.

Ditto what arnie said - cleveland classics rc85 and mac toney pennas. if you can find a wood bros texan on the bay, pop for one of those, for sure.

Of all classic equipment, I like sand wedges the least…I actually do think the shape of modern wedges are more pleasing to my eye, but I hate deep, modified u-grooves, which is why i’m psyched for this new groove rule.

However, if you can find some late 80s, early 90s forged titleist wedges, those are nice and a lot of hogan wedges from the 70s-80s are very nice, as well.

Thanks fellas! I’ll be sure to post if I come across anything good…

This is my main wedge I play most rounds with, unless the set has a really great wedge, I usually keep this in the bag.
The split sole is an amazingly versatile club. You can really nip it, or open it and not have to worry about too much bounce, but when you take a divot, the second rear flange takes over and stops the club from digging… great stuff… Silly that no companies make this anymore. I think they are the greatest wedges ever. I just added a bunch of tape onto the back to get more mass and a heavier swing weight.

That baby has personality. If wedges could talk…

I do know an addiction therapist!

I want to learn a bit about refinishing persimmon - may have seen the speed slots I posted - but not sure I have the time, so I’m back on the ebay train and came to review Arnie’s suggestions. Found these in the basement, and thought they weren’t anything special, but realized they’re on the list. Are these decent or interesting? 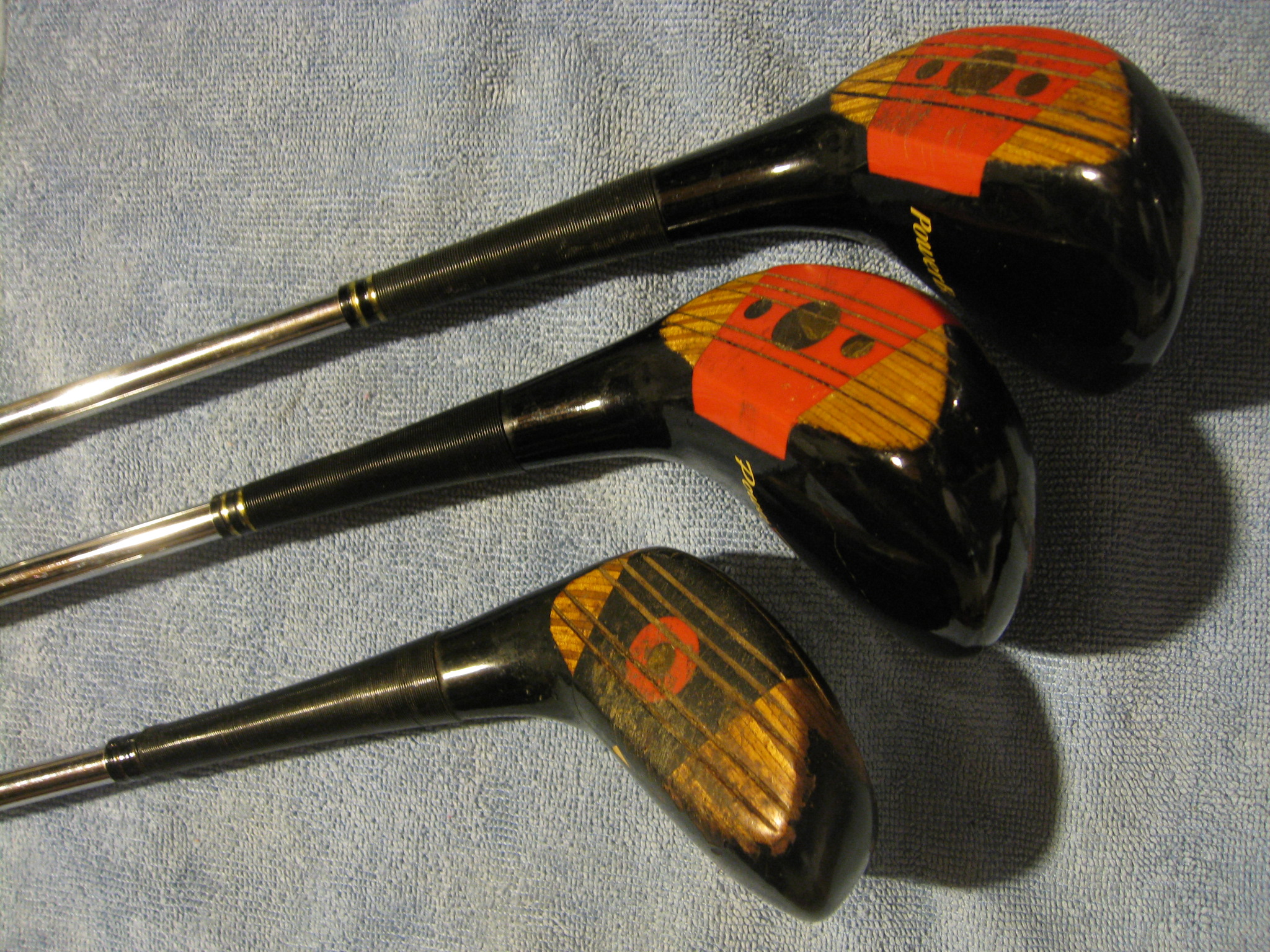 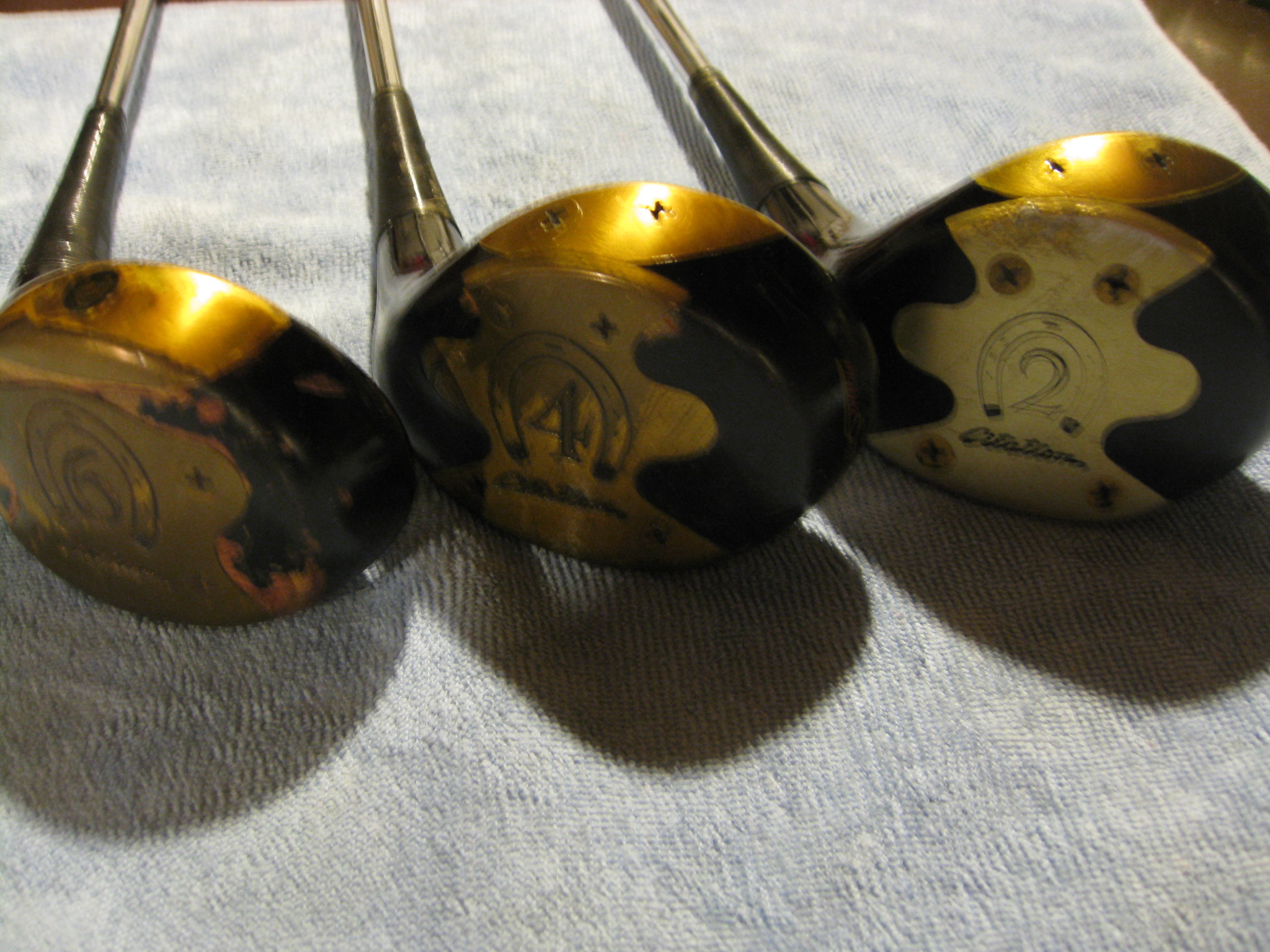 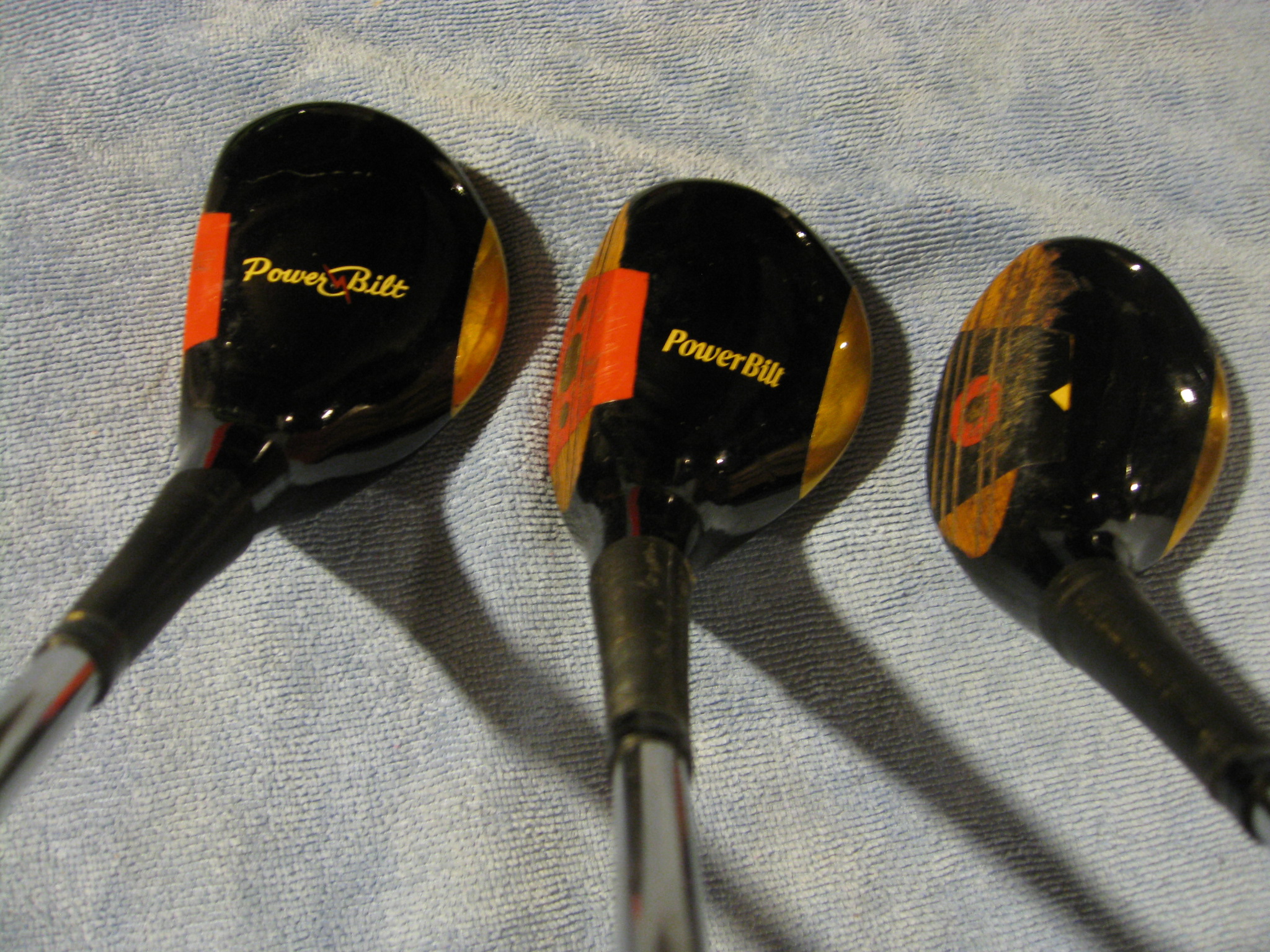 Powerbuilt made good woods. These ones are laminated . Which is thin layers of wood stacked on top of one another to make the size/shape of the club. You can see all the different layers of the panels if you look on the face.
From my experience laminated woods tended to get beat up and fall apart and chip much easier than persimmon.
Persimmon is one big solid block of wood shaped into one head. Laminated is all thin pieces layered and stuck together. Not much difference hitting wise but I think Persimmon made more of a crack when hit and laminated woods sounded a bit softer

Ahhh, thanks TM. Off to ebay they go…

If you can find some of the early Powerbuilt or H&B persimmons from the 50’s or 60’s you would do well to get them… some really great stuff.

It’s probably been discussed before but what type of balls should we used with Persimmon woods?

It’s probably been discussed before but what type of balls should we used with Persimmon woods?

Good question Pipp. Some persimmon purists will have you believe that hitting a vintage persimmon with anything else than a genuine balata ball is an act of defilement that should carry a custodial term

My experience is that if you follow a common sense approach you should be fine. To me that would be:

Others will have their favourites and I hope to hear some feedback from them. I think the Srixson Soft Feel was used at the Las Vegas Class Club Tourney that Lag won. The old Nike Gold was also mentioned in another thread. 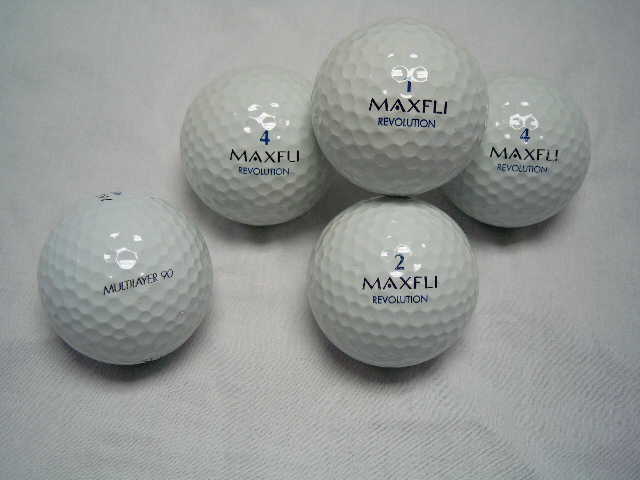 This past year I’ve played pro v1’s and wilson zip’s. The zip launches a bit higher which is why i prefer it over the pro v1 (despite getting less spin, but thats probably because i think i generate too much spin with my swing as it is). I prefer the zip for putting as well.

there is no doubt that the ball is going further, but I blame the titanium drivers with their added shaft length. A 47 inch driver super lightweight will create tremendous velocity, with the same rotational speed of the torso compared to a 43 inch persimmon. Throw in the spring board effect of the faces also… but with the frying pan heads, there is no need to make a precision balanced swing anymore, so everyone just goes at it as hard as they can on every drive, swinging out of their shoes with no fear of missing or whiffing the ball with the frying pan… so that also has a huge effect. If some of these young guns swung like that with a little persimmon head they’d be missing the ball completely… and often.

I hit my persimmon about 260, but I can hit a titanium 40 yards farther…same ball… and if I want to swing for the fences I can hit it 320 no problem. Fortunately I don’t feel the need to do that.

Does anyone know anything about '67 Haig Ultra irons, TPW wedges, and '64 Powerbilt Citation Woods? I’ve never heard of the TPW wedges, but have a chance to get PW and SW.
Grad

67 Haigs are great…
The Haig’s were Wilson’s premier release, considered above and beyond the Dynas…

Citation Persimmons are great blocks… just make sure they are persimmons…