Old vs. New/ Small vs. Large

i’ve been ABSing since Mid Dec and currently on Mod 4. My swing is nowhere where i want it but i see the path and i like it. this ain’t about my swing anyway, this is about equipment.
When i started abs i ran out and bought a set of cheap blades straight off and have been collecting them ever since.
i started to work on sets and practiced alot with them but when i had a game i stuck with my old srixon cavity backs and a frying pan. I did this mainly because i had my main event of the year in late april (just a member guest, nothing too big) and did not want to shock the system. I did alot of practicing with the old irons, but not so much with persimmon. about mid march, i was just ready to get the main event over so i could go retro full time.

needless to say, it has been nice. granted most of my playing is only on emtpy muni’s or a 3 hole practice course i frequent, but these past fews weeks have
been way more fun playing wise and truly eye opening to what old equipment can do to your pysche. a couple of weeks ago i was out at the 3 hole course
playing 4 or 5 balls which i have always done, and i was just hitting my new/old penna 240 yards into a peach basket. seriously, they were all with
10-12 feet of each other and with a nice power fade (never hit a fade until abs). i’ve played 4-5 balls a round a million times and have never ever done that. done do it with a 7 iron plenty, but not a driver much less one that is supposed to be “unhitable”. a few weeks ago i started putting my '53 mac m85’s in the bag and have just fallen in love with the thick topline and tiny head. if you’ve never looked down at one, it’s nothing you’ve ever seen.
once you get over how small they are they just feel like one big sweetspot. i feel like i’m playing tennis with a wooden racket again and smackin the
same spot on the gut strings. today i was at the first tee course with my 8 year old (actually a pretty decent executive little nine holer) and brought out my
66 hogan percussions with dg shafts that were pulled from modern titleists. they felt like pings compared to the m85’s. shafts were just a little too long and the heads just a little too big…i never thought i would think that a set of mid 60’s blades would feel too clunky, but don’t get me wrong, i still love those hogans-i had fun taking the old rusty shafts out, steel wooling them to death and bending them all around. it’s just eye opening how your perspective can change, and quickly.

i tried to hit one of those white taylor made things at a scramble the other day and whiffed, yes wiffed, not once, but twice. after the laughter
died down i grabbed my penna and smacked a nice little 240 yard cut… 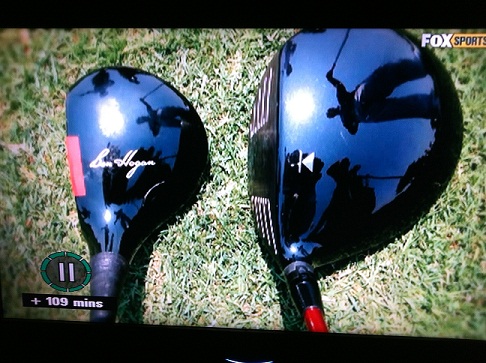 Says it all really

ocat I totally agree with you here. I also love my M85’s. Most people bash on thick toplines. I love it! It says,“I have tons of mass behind the sweetspot!” And the tiny, beefy little blades, like you said, “there’s nothing like it!”

Love my sets of M75’s and M85’s. talking with Charley Penna (nephew to toney) he gave a little suprising info on the clubs. Said the M series was a bit of that era’s version of game improvement , although the term was not used. GAME IMPROVEMENT!!! you owners know just how small the heads…different times.

"The game improvement aspect came from the ease of getting the ball in the air. These clubs replaced the flat back blades which were originally from the prewar era. These were the first irons by a major manufacturer that were not blades. At the time, MacGregor, Wilson, and Spaulding had most of the top line club market. As an aside, Toney got the idea from a club made in Scotland around 1910 which was in my grandfather’s attic. He saw the club when he went to Harrison on a holiday visit. My grandmother would not allow smoking in her home. After dinner, the men would go up in the attic open a window, and puff. There was a bag of old clubs which had the club with a wing back in it.

The M series were the first heads that seemed to center the mass behind the sweetspot with a much shorter head. So a lot of the weight out on the toe got re distributed behind the impact area. So am am sure this improved some ball striking.

Mehlhorn was doing this years before, but I have never seen any of those clubs he had custom done. He said he sawed the toes off and epoxied them onto the back of the club behind the sweetspot.

So this probably came from his idea. Mehlhorn claimed to be the first to put numbers on the bottom of the clubs also.