I’ve been watching replays of today’s round and am surprised with how few players are hitting greens. Misses long always have sharp downhill chips that roll off the front and shots that land on the green just skip off the back. The commentators mention that the greens are much smaller and have much more aggressive slopes than other spots since it’s an older course. Has anyone played here and can comment on the course conditions vs other tour stops?

Riviera is a great old fashioned course. It really reminded me of Australian courses with the kikuyu fairways and the smaller greens and guarding bunkers on some doglegs and around the greens. Allenby won there one year. Elk won the PGA there…even a hack like me had a 5th and a 10th there in the event when it was called The Nissan Open back in late 90’s early 00’s. So it was a great looking course for the Aussie’s and fitted our eye well.

I honestly don’t think the greens are that severe there. Not ridiculously filled with humps and hollows…although one green has a bunker dead smack in the middle of the green.

A few of the greens like #2 and #9 get a bit quick because those greens are built sort of into the hill at the base of the clubhouse area,so the hill dictates some back to front slope on those but certainly nothing crazy whatsoever. The greens are narrower in width than the majority of PGA courses, but still plenty of grass to hit at.
A few holes were lengthened from the time I first played there to the last time I played there such as holes 9 and 12 were lengthened significantly and Hole 6 (the par 3 with the bunker in the middle of the green) was pushed back 25-30 yards…but I haven’t been there for a few years now but I don’t think they could have altered it much as they had no real estate left to drop and tees back any farther. The 8th hole looks weird. It used to be a split fairway par 4 with trees …so you could play left fairway or right fairway…now it looks like they ripped all the trees out and put a few fairway bunkers in. That old 8th hole was so tight from the tee, it was magic…position and then approach…I bet the guy who designed the course originally would have a cow looking at that hole now.
I think the fact that precision more than power may be finding a few guys out. The greens are not that small…smaller than your TPC elephant burial ground greens but hey- the greens are there ready to be hit, sounds like the commentators are making excuses for some sloppy play 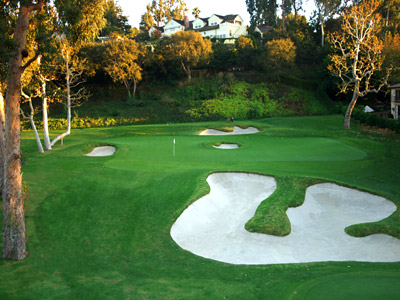 Riviera is a ballstrikers course. I played high school matches there growing up, and remember the unmolested version of the golf course. I don’t know what they have done to it recently. A lot of the modern players skip it because it’s too tight off the tee.

There is a lot of strategy, and you have to think a bit out there. It’s one of the last remaining real golf courses the US Tour plays anymore. I’m sure it’s days are numbered… so anyone getting a chance to get out there and see it this weekend would be well advised. Not sure the modern gear is really going to help a player all that much there, unless they have cut down a lot of the tree branches like they did at Harding Park.

Thanks for the first hand view. Couples has the clubhouse lead and he kept saying it was a ballstrikers course. They also kept mentioning how Pavin used to win or do well but now he doesn’t have the distance to handle it. Just pulling up his stats, his driving avg of 248 yards vs Couples of 300 yards is a pretty big margin to make up. Although I think Pavin hit 14 greens during the 2nd round.

I’ve been keeping my eye on Pavin this week too. He must be going after it a little harder than normal because his driving avg this week was 260. Didn’t know this was his home course in college…makes sense that he would put it on the schedule and play well. I wonder how much money he is turning down by using that old bullseye putter instead of something new shaped like a puzzle piece painted white.

With persimmon… it was a long course at 6900 which was what it played before alterations. The kikuyu grass is really odd
for some people, and it takes a certain feel to play off it. Chipping out of it can be really difficult especially if the ball is sitting down. For those who have not played kikuyu, it’s like crab grass that grows sideways in thick above ground roots, and then those roots that weave above ground have thick blades that point up. The ball can really be “teed up” sometimes… often too much… and other times it will sit down in that stuff and it’s like swinging through barbed wire. In places where the rough is grown out… it can be the worst kind of rough on the planet if your ball is sitting down. It really is a different kind of animal.

At times the grass can act very spongy, and I have seen drives hit the ground and literally jump backwards… especially if the grass has not been clipped real short. Bottom line is it is very unpredictable. However, I think it’s a great grass to grow up on. because if you can deal with kikuyu, it makes other grasses a lot easier to deal with.

I think Riviera is one of the great courses of the western USA. It certainly favors a long hitter, but only a long hitter that drives it straight. It’s also “gamey” enough of a golf course that a shorter hitter can work their way around and play strategically and do well also. So it kinda gives different style players a chance to do well with different styles of play which is EXACTLY what a great golf course should offer up. This is why you see Pavin, Kite, Casper and other shorter hitters on the trophy also.