Maybe I’m the last one to know about this tee…I got it from my Dad for Xmas…He gave me just one and said that’s all I need. I don’t even know who makes it but I’ve played two rounds and can’t seem to break it in 40 degree weather. Apparently you’re supposed to line up the tee when you stick it in the ground with the direction you’re going. In the pic the direction would be where the shadow is pointing.

Anyone else using these? So good so far for me. 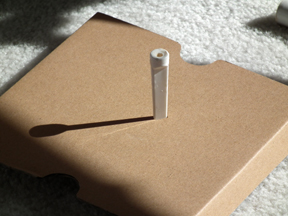 But the real question is…has it shaved 5 strokes off your game yet?

They’re pretty common here. From what I’ve heard they don’t ever break, however their life is limited by the cup at the top wearing and refusing to hold a ball anymore. Also good for fixing ball marks.

These are pretty good and have been around for a while, but I find as the tee ground starts to firm up over summer they are very hard to get into the ground…

just stubbed up a piece of turf with his shoe and sat the ball on top hehe. Even for the driver!

But the real question is…has it shaved 5 strokes off your game yet?

Too funny and it obviously hasn’t yet but will let you know if it happens…It’s strange to truly give a hoot where the tee goes after the tee ball and 2M is right that they are hard to lose. For the time being I’ve nicknamed it Moe because from my understanding he rearly broke a tee

One would be astounded if they were to see how many patents on golf tees have been filed.

One would be astounded if they were to see how many patents on golf tees have been filed.

Ah yes, the wonderful world of intellectual property.
This is a nice site (albeit a little slooooww) with al sorts of strange patents related to golf.
golf-patents.com/

Must be an original Pelz patent

It’s a good site that, Rod Morri interviewed the guy who runs it once.

Regarding the putter, well the Rules of Golf require a putter’s clubhead to:

a) be plain in shape
b) not resemble any other object, and
c) not have facsimiles of golf balls or actual golf balls incorporated into the head;

I always wondered how the Odyssey Two Ball passed.