I grew up on this golf course… Palos Verdes C.C.
It’s the kind of golf course that would always keep your interest, and it always felt special playing it.
Ben Hogan’s 1951 film “Follow the Sun” was filmed here for Hogan’s live ball striking shots. Ben loved this course. It was not filmed at Riviera as many speculated.

Very tight driving course, and very small greens requiring very precise ball control. Crazy rough, with the great bridge on the 12th. I used to laugh at the bridges at Augusta!

Nice pics Lag.
I can now see why you loved playing in Australia so much. It reminded you of your home course. Smaller greens, narrower fairways, tee trees off to the sides of many holes to penalize an errant tee shot, even a few gum trees hanging over the fairways requiring some shot shaping, bunkered greens still giving you options

I remember you telling me how you loved Riviera, and had some good finishes at the LA Open. I bet you felt right at home. George C. Thomas who designed Riviera, also designed PVCC. Later the course had some work done by A.W. Tillinghast who of course designed The San Francisco Golf Club, Baltusrol, Bethpage original design and many others. They used to have the qualifying for the LA Open here at Palos Verdes CC. 66 was the best I ever did there. Rarely did anyone shoot low. Mark Pheil grew up there too and his best was 64. The course record of 61 is still held to this day by Jim Ryseki who grew up here and played at USC with Stadler back in the early 70’s. Jim didn’t pursue a career playing golf but we played together even after he was done playing serious golf and he was just an awesome palyer. He would shoot 67 or 68 like nothing playing a few times a year. I wish I had pics of his swing because he was a classic pivot driven hitter. We also had Joanne Pacillo who won the US Womens Amateur grow up here. Pheil was a PGA Tour winner and Walker Cup player. Kathy Hanlon Marino also won on the LPGA. She beat me in the Junior Club Championship finals one year…

My wife is off +0.1 so I know the feeling of being beat by the other sex

Those pictures look fantastic, uou can almost see what is being asked just by the the pictures and I imagine it is so much more in the flesh.

Every shot out there is a challenge, you have to do something really good to get the ball into the green under the hole and from the correct part of the fairway. The first hole you typically have a 6 or 7 iron from a downhill lie hitting to a small heavily trapped extremely sloping green, into a direct ocean wind.

The second is a 220 yard par 3 dead into the wind, bunkers left and right.

The third leaves you a downhill hanging lie, hitting an 8 iron into a small green that you have to draw your shot off this lie below your feet to avoid trees hanging over the green on the left, with a bunker on the right.

The forth is that long par three in the picture to the postage stamp. Usually a 2 or 3 iron. Short is the only safe play.

The 5th is a tricky par 5 you can see in the photo going left then up through the tightest shoot of trees you have ever seen.

It just goes on like that all day… it’s only 6300 yards but I never once saw anyone shoot par out there on a first or even second look at it… and I brought some pretty good sticks out there over the years.

I suppose that is why I am so bored to death with flat long 7000 plus courses where everything is just right there in front of you. I love the idea of getting to know a golf course… learning about all the nuances.

I suppose without really big money the economics, production logistics, and marketing issues work too much against us ever seeing a PGA tournament on a course like this.

The leaderboard could be totally crazy all four days.

I don’t see any reason why there shouldn’t be a persimmon tour, as other sports have split into different games and gone on to do well.
Look at all the different types of auto racing. Indy, Grand Prix, Nascar, Drag Racing.

I think Golf should follow that model. Then we could all be happy and pick our poison accordingly!

Lag,
That course is to die for! It really looks spectacular. A great example of old school golf. If I ever get back out the Cali in the next few years, I’m gonna try and play it, assuming its public. I love that bridge. There is a great Ross course near me called Brae Burn, which has a bridge very similiar, its on a 225 yard par 3 over a big ravene. Here is a pic of that hole and the bridge I took in Aug. 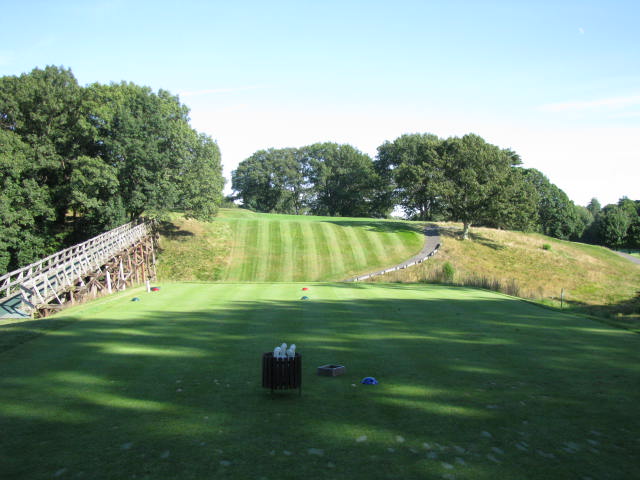 That looks like a great hole… almost hauntingly familiar!

You can play Palos Verdes CC
it is semi private, open to public in the afternoons I believe… so call out and book in advance…
that’s where I really learned to play golf…

Whatever they charge… just pay it… you won’t regret it!

They have made a few changes, but for the most part, it is original…

Lag: Looks like a great place to play…shotmakers heaven. That bridge would cost me two strokes easy…don’t do heights well. If I’m on an elevated tee place money I block it right. The ammunition bunkers at Mare Island is fascintating. If they are in play I hope McCumber doesn’t get near them with his beaver pelt divots!

There’s a non-descript small couse near me that has a different past. Salt River GC was built upon an old indian burial ground. The original treaty signed by the indians said that no matter how many times the land changes hands the bodies cannot be moved. In fact, hole #4 is an actual burial site. That’s correct…when rolling the rock the bodies are about 20 feet below you- at least that’s what the course claims. From it’s look it would be hard to dispute. I’m going to try and learn how to post pictures and I’ll post one. It’s an eerie hole…and an emminent 3jack for even the best pro.

Lastly, about bridges…I was there when the LPGA had a stop @ Hillcrest Country Club when the bridge spanning the Clinton
River collapsed while players and caddies were crossing. Maybe too much persimmon and carbon weight

The LPGA is acutally incorrect…so long ago I used it to designate some type of womens pro tournament. Happened so long ago forgot the name

I just saw this thread and didn’t realize that Lag grew up playing Palos Verdes. I grew up playing on the cheaper side of the hill at Los Verdes. I was fortunate to play PV many times during my high school days in the early 1980’s. While it was a private country club at one time Junior golfers were allowed to get on in the afternoon at twilight. We used to pay a whopping $5 to get on! The best deal in town if you think about it, but at the time $5 for a starving high school kid was still some money. Now if the urge was great, we used to sneak on PVCC. I think it was #3 that was right beside the road and the only thing that separated the course from the fairway was a low white wooden fence. We’d play several holes near dusk then jump off back to the road before the getting to the clubhouse. Sorry about that Lag, your course was too nice to resist! Those carefree times formed my best memories of this game.

Los Verdes and PVCC both great places to play on the hill, So much better than Montebello and Rio Hondo.
The new Terranea 9 in PV is a nice place to work on your short game.
The architect is a minimalist who as it happens is from just outside Santa Cruz and grew up playing Pasatiempo