My first foray into the world of persimmon modification

I’ve been a little under the weather for a few days, so since I haven’t been playing, I decided it would be a good time to dive right into some persimmon work I’ve been wanting to do for a while. I have a set of Powerbuilt Citations(1,3 and 4) I bought on ebay 4 or 5 months ago that are a little banged up and have very whippy shafts in them. I plan to reshaft them with tipped x100’s and refinish them too. I might try to flatten them a couple degrees, but nothing drastic on my first try.

Today I got to work on the driver. It had a lot of nicks and dings, as well as some checking in the lacquer finish. It also has a bad gouge under where the back screw is.

Today I managed to undo the whipping, remove the set screw (way harder than I expected it to be), pull the shaft, strip the clearcoat, and begin sanding. It’s coming along nicely, and now I just need to decide whether I will use black paint or a stain instead. I think I’ll be able to fill in the nicks with some sanding sealer I have laying around too. I’m also going to add some weight in the back.

Here’s what I started with:

Here is what I have now:

If you are going to flatten then at all, you may aswell go the whole way.

The best way to add weight is to remove the sole plate and add some weight in under there then it can be covered nicely by the sole plate. You will probably need to heat the screws up to get them out, they will be bedded in epoxy. Heat up the tip of a screwdriver until its red hot then press it into the screw for about 10 seconds till the heat has transfered, then use another screwdriver to remove the screw. Its really important that you have the right size screwdriver to fit the screw and don’t damage the screw cause once they are damaged they are much much more difficult to get out.

Am sure they will look fantastic after a bit more sanding.

Thanks for the input. Originally I wasn’t planning on re-boring the hosel, and I was just going to widen it a bit and shim it to flatten it out a couple degrees. Since then, I’ve decided I will go ahead and flatten it all the way.

Unfortunately, these are Frearson head screws, and I can’t get them out with any of my Phillips head screwdrivers even with a lot of heat, so the sole plate will have to stay on. Luckily it is nice and tight.

The heads are looking good now aftermore sanding and lacquer thinner on the two fairway woods. I only had 150 grit on hand, which was taking forever. I am going to pick up some 80 or 100 grit tonight. I’ll also probably pick up some stain tonight.

Aye, those screws can be a nightmare to get out. You can always add some powder to the tip, it will be pretty close behind the sweetspot.

Yeah I might do that…That’s how I do all my irons and modern clubs. I think I might want to experiment with the external weighting though. Sounds like an interesting process.

There is another possibility, sometimes they pre drill a second hole for adding weight and you can sometimes get to it and add some powder mixed in epoxy without removing the sole plate. 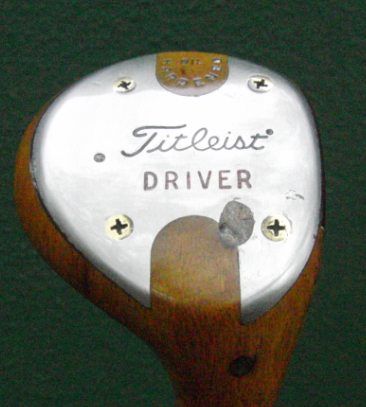 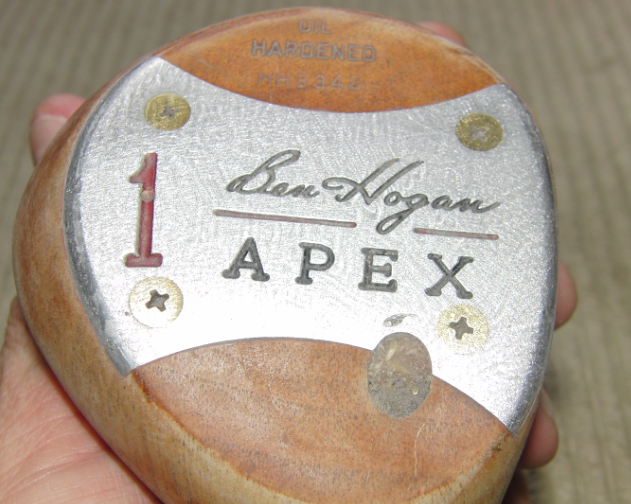 External weighting can be a messy affair.

I now have all the heads sanded and ready, and yesterday I tried to fill one of the bores with epoxy and sawdust. How do you guys make sure you fill them well enough? I’m worried that I didn’t fill the entire length of the neck. Is there a good way to get the epoxy in there evenly?

If you have one of those oversized syringes (used for turkey/meat injectors) you could use that to get the epoxy down there but you will ruin the injector. Don’t use alot of sawdust though.

The other way is to just put a little bit of epoxy at a time and use a stick to help push it down and break up any air bubble. Make sure the epoxy touches all of the sides. That way you won’t have any gaps. It’s slow but effective. Just don’t take too long because the epoxy will hardened up. Speaking of epoxy, for this operation you will probably want the slower setting stuff. You need to keep it liquid for a longer time to allow it to settle down the bore.

If you have it bored through all the way, let the epoxy drip through to the bottom for a bit to make sure you get all the way down. Then you can tape the bottom hole to contain the epoxy. I also like to tap the bottom of the clubhead to help the bubbles rise to the top as I fill a section of the bore. Don’t just wait till it is completely filled to start tapping. The bubbles may not make it up that far.

A recommendation for filling the hosel prior to reboring is to use a good hardwood dowel rather than Lag’s sawdust and epoxy technique. I showed Lag this method and I think he will endorse it. Make sure the dowel is real hardwood and not the soft varieties some stores pass off. I find that the craft stores carry better wood than Home Depot etc. you might have to enlarge the bore a tad to fit the dowel diameter but that is easy. Epoxy the dowel and go to work. Mike

A recommendation for filling the hosel prior to reboring is to use a good hardwood dowel rather than Lag’s sawdust and epoxy technique. I showed Lag this method and I think he will endorse it. Make sure the dowel is real hardwood and not the soft varieties some stores pass off. I find that the craft stores carry better wood than Home Depot etc. you might have to enlarge the bore a tad to fit the dowel diameter but that is easy. Epoxy the dowel and go to work. Mike

I’m going to give this a go on my persimmons. This has been the only part of the process holding me back. I have several more I’d like to do, and I’m really looking forward to the refinishing part.

I know this is an old thread, what diameter of dowel did you pick up!

That’s what I did. The doweling is way easier than the sawdust way. The dowels I use have ridges, so they work great for being epoxied in place. The re-boring is easy if you follow John’s tutorial. Seeing this post makes me want to get back to work on mine. I haven’t done anything to a nice set yet, I’ve just experimented with some cheap persimmons.

Thanks,
My first project really bombed, when I started the bit to rebore it walked to far towards the face and
I could not get it back on line, even after cutting the neck down and drawing the lines, it takes a steady hand and good eye,
I’ll be practicing on another before too long, In the mean time I am shipping 3 clubs to Mike to do for me,
So I can at least train my swing with the right driving gear…
I’ll try the hickory method next time, thanks

My dowels are nowhere near 3/8ths. I think they’re closer to 1/4". I just finished re-boring a Toney Penna driver head at 48 degrees. I’m going to do the refinishing this weekend. I should have taken some pictures of the doweling process.

Yep, doweling is the way to go,finding good dowels has been a challenge, nothing but crap indonesian and chinese wood at retailers around here… hunting around on line…
I did end up using a 3/8 ‘’ dowel … after the neck is cut I drilled up in three bit increments to an 8.5 mm bit and just sanded the dowel with 80 grit until it fit decent and epoxied it in , worked good.