My 2 year old son schooling me in ABS 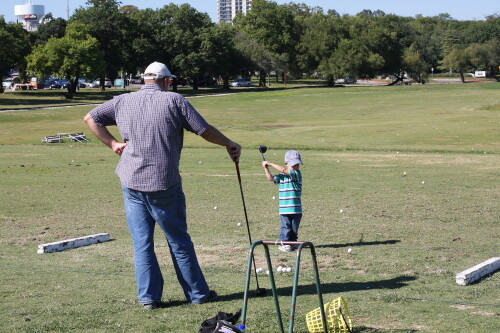 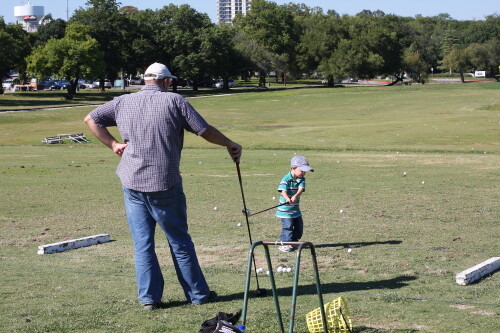 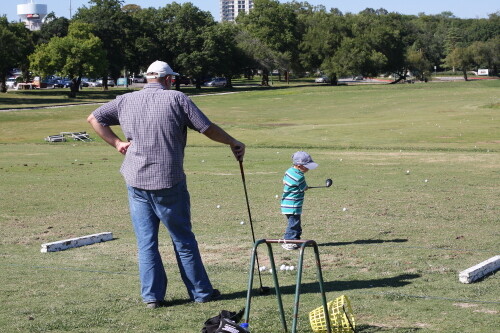 Seeing these memorable pix and captions made my day.
Thank you.

From the mouths of babes… .

The kid is just obsessed with Golf. He started swinging a plastic club about a year ago, and we upgraded him to a kids Taylor Made 3 wood about 6 months ago. It’s still a bit long and heavy for him, but he can actually hit it about 35 yards or so. He has been to the driving range with me several times, and is just like a mini iron byron robot…hit hit hit hit hit…dad I need a new tee…hit hit hit hit hit. Last week we went out to the local Par 3 pitch and putt, and he actually played all 9 holes, and was so amped up, he ran…not walked…RAN to every shot. He can look at video and tell you who is Ben Hogan, who is Sam Snead. No joke, night before last he went into my office and grabbed my copy of 5 lessons and asked my wife to read him the “Ben Hogan Book”

In true ABS fashion, I found a pristine set of forged Hogan junior muscleback blades that he’ll be ready for when he’s about 5 or 6.

Great photos! Thanks for sharing these, aldear… Some of the coolest and most informative footage on youtube is of kids swinging the club, it always amazes me where there instincts take them. Looks like you’ve got your very own teacher- just don’t tell him he’s the one teaching you just yet, he’ll figure it out eventually, I’m sure!
The other ABS connection with this stuff is the weight of the club relative to their strength- they have to use their strongest method available to move it around the place. It makes the modern weight lifting golfers using super light clubs seem a bit dodgy to say the least.
Cheers…

I was thinking the same thing about the natural instinct to swing a club (more around and not up), when I looked at these. The quotes were meant to be funny, but there is definitely an air of accuracy to them. I mean in the second photo, he really does squat a bit, and in the last photo…he really does cut it left with little to no roll. His shoulder turn is very level as well.

This past Sunday, my dad showed up at the house with several kids clubs he got from a friend…one is is an old, OLD Walter Hagen 3 wood that fits him perfectly…and is actually WOOD thank goodness. And on old forged 7 iron of some sort, that is his size as well.

His 3rd Birthday is coming up in January, so the other day my wife asked him “Jackson, where do you want to have your birthday party?”

I think Paulsy mentioned a while back while teaching juniors up in Toronto, the ones working with heavy clubs improved leaps and bounds quicker than handing kids lightweight gear.

My personal belief is that lightweight gear over time is a swing killer. Once the muscles acclimate to the light clubs, muscle tone decreases and well as both control and ball compression. You might not notice it at first, but over time… you will notice your handicap go up.