“It’s a swing, not a hit. You should have a pulling sensation.”
Moe Norman

“The heavier the clubs the better. The swing weight on all my clubs is E-3, and my driver weighs 16 ounces. To get them that heavy, I put lead tape under the grips and on the clubhead. I don’t like light clubs. They feel like matchsticks to me and tend to wave all over the place when you swing them. Speed is important, but so is mass” 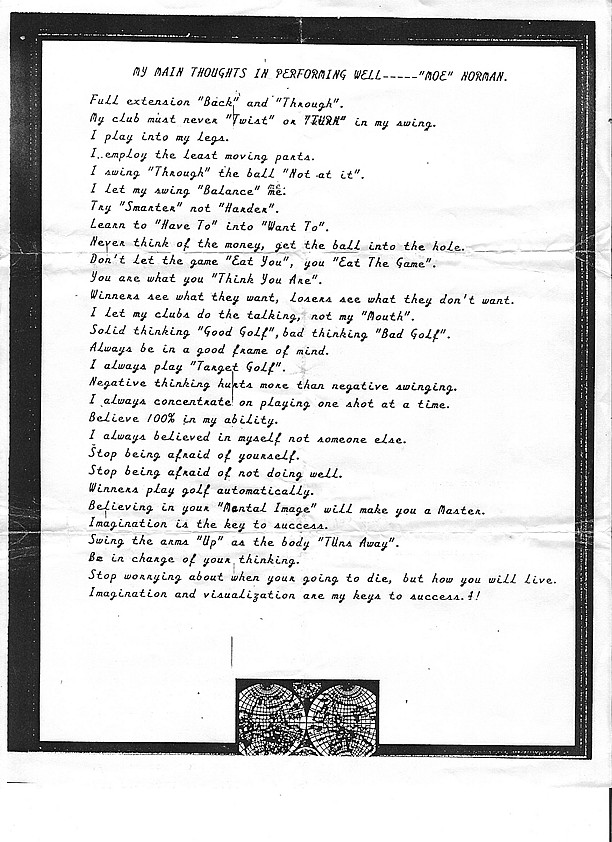 A missed golfshot will never hurt my golfswing, only my vanity. And vanity is the luxury of fools…
-Moe

You gotta know what makes you tick, and only you know. What makes him tick may not make you tick.
-Moe

“I play with an alert attitude of total indifference”.

“Hitting the ball pure and accurate is more rewarding than hitting it far. Don’t forget that, ever.”

“we swing into our legs not on top of them”

“understand one thing the ball goes were the hands go”

“everything is so connected”

“Going through the ball, I feel my right hand is a claw. No hinging of my right wrist at all. I just gather the ball up. No supination or pronation. On the follow-through I shake hands with the flagstick.”

“Don’t hold the club lightly. That’s a mistake, because you’ll get too wristy. Hold it firmly. You won’t hit the ball quite as far, but you’ll hit it straighter, which is what this game is about.”

“its all the left knee and club shaft”

Moe was playing with Snead, they come to a par 4 with creek crossing the fairway. Moe pulls driver, Snead says “What are you doing, you can’t carry that creek” Moe replies “I know, I am aiming for the bridge”

I found a Moe quote today from a general golf book I was looking through:

Apparently Trevino had a new set of clubs and walked up to Moe (who was hitting balls on the range) with the 4 iron in hand to show Moe and ask him what he thought of the club.

Moe took it in his hands and waggled it a few times and replied “Too light…Piece of shit. Too light”

Trevino persisted and asked Moe to hit it anyhow. Story goes he hit about 5 balls with it and they all landed close enough to throw a blanket over…
Trevino shook his head in amazement that he could still control the ball with a club he didn’t like the feel of and went back to practicing himself.

"The first time I saw Ben Hogan was at the Carling World Open at Oakland Hills. He was on the range, and all the players gathered to watch him. Hogan didn’t notice because he was really concentrating, but when he finished he looked up and saw all the guys watching him. As he walked away he said, “I can see why you guys are no good—you’ve all got calluses on your asses.”