This kid is 16 and won the British Amateur last year… what a golf swing! It’s got so much old school flavour that it’s hard to believe it’s from today. His club is coming into impact on such a deep and low path- fantastic. Let’s hope all the great coaches don’t get their hands on him and make him ‘better’ by teaching him to ‘stay taller’ on his downswing…or god knows what else!

If I had to hazard a guess, probably brought up away from the influences of swing technology and popular opinion, allowing him to find his own swing, that works.

Amazing comparison to the guy who lost to Manassero. Where did he learn the cut it left move. 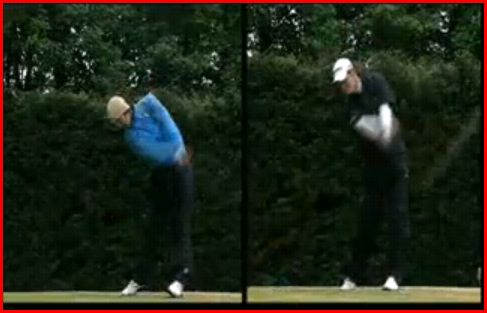 This kid is 16 and won the British Amateur last year… what a golf swing!

He also finished 2 over, tied for 13th place in last years British Open. I remember at a certain point during the tournament the both were high on the leaderboard: a 16 year old and a 59 year old (they even played together on the first two days). Seeing as he won the British Amateur he’ll also compete in the Masters.

Like the little sit down he does for his trigger

I like how his head has lowered several inches when he gets to impact. Very powerful move. His position at the top is pretty much optimal imo.

Thanks for framing this Lag… great stuff. I had to cobble the other three together to get close to the right positions but regardless, the similarities are pretty strong

He’s not doing too bad in Dubai at the moment either: 69-72. -3 and currently (half the field is still playing their second round in 13th position).

I am really really impressed by what this young lad is showing. He’s only missed one cut this year and within 6 months after becoming a professional (shortly after this years Masters) he’s allready won his first title. I hope he keeps it up. (Danny Lee, former US Amateur winner and winner of the Johnnie Walker Classic in 2009 only made the cut in 11 of the 22 events he played this year and had a 21st place in the BMW International Open for his best result).

Did we all call this back in Feb?

Further to thoughts he had been left to find his own swing, as you can see he is the product of the Italian Golf Federation proving that a lot of the Golfing Unions have the best interests of young players at heart. Ireland have supported Rory McIlroy and Shane Lowry helping them get to where they are and clearly Italy have done the same with Manny.

[b]"Manassero, of Verona, Italy, turned pro in May. His previous best European Tour finish was third in the Omega European Tour Masters. That result ensured his playing rights for next year. He now has a European Tour card for 2012, too.

Manassero is proof that if you invest in talent, you often get results. The young man is a product of the Italian Golf Federation. Identified as a true talent as a boy, he has been nurtured thanks to intensive coaching from the federation.

“You could see then that he had the patience and the determination to learn,” Binaghi said.

Ballesteros inspired Manassero to play the game when the Spanish great chipped balls with a 4-year-old Manassero at Gardagolf & Country Club.If he has even half the career Ballesteros had then, Manassero could go on to become Italy’s greatest golfer, perhaps Europe’s."[/b]

Styles, I think the overall point was that he wasn’t corrupted by bad teaching. Having someone like Binaghi guiding you and nurturing you, would be a fine example of that. It’s tough to win on tour at 17 without bringing something of your own to the table. Thankfully, like Rory, he was in good hands.

I now know how hard it is to achieve those positions during a swing…especially the shaft position in the middle photo.

Back to the modules!