HEAVY HEAVY rains now in Georgia, with flash floods, but predicted to end by tomorrow and be nice the rest of the week. 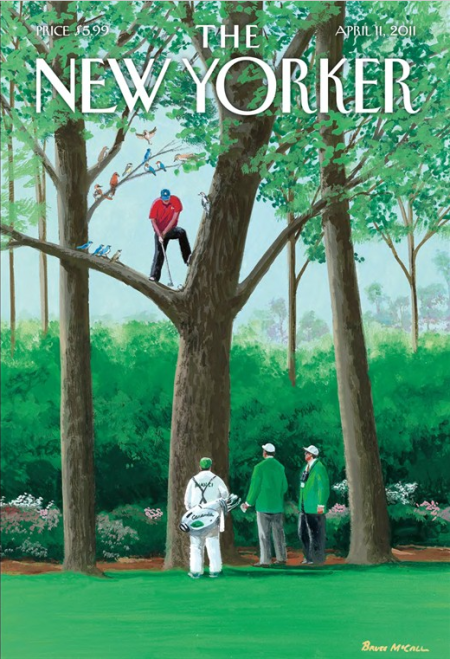 There is a quick video of Jimenez stretching. I noticed he has old fashioned shoes with real metal spikes. Go old guys lol

Wow - quadruple bogey 9 for Dufner at 13. Amen corner is playing really tough today with a lot of players coming away +1 or +2.

HEAVY HEAVY rains now in Georgia, with flash floods, but predicted to end by tomorrow and be nice the rest of the week.

Eagle–are you on property this year? It looks like the treetops were thinned out from the rough winter down there.

Nope, unfortunately I’m not there, so I cannot see how it looks firsthand. But yes, there was an ice-storm in GA, so I’m sure many limbs and some trees were lost. But pine limbs are an ever growing/increasing crop. So I bet while a lot of hard work was needed to clean up, the course did not suffer damage that will affect play.

The heavy rains on Monday helped the pollen situation. But on TV it looks like the greens are fast already, and with sunshine and a breeze predicted to get faster. Conditions for spectators, and golfers, are near perfect for a few days now. 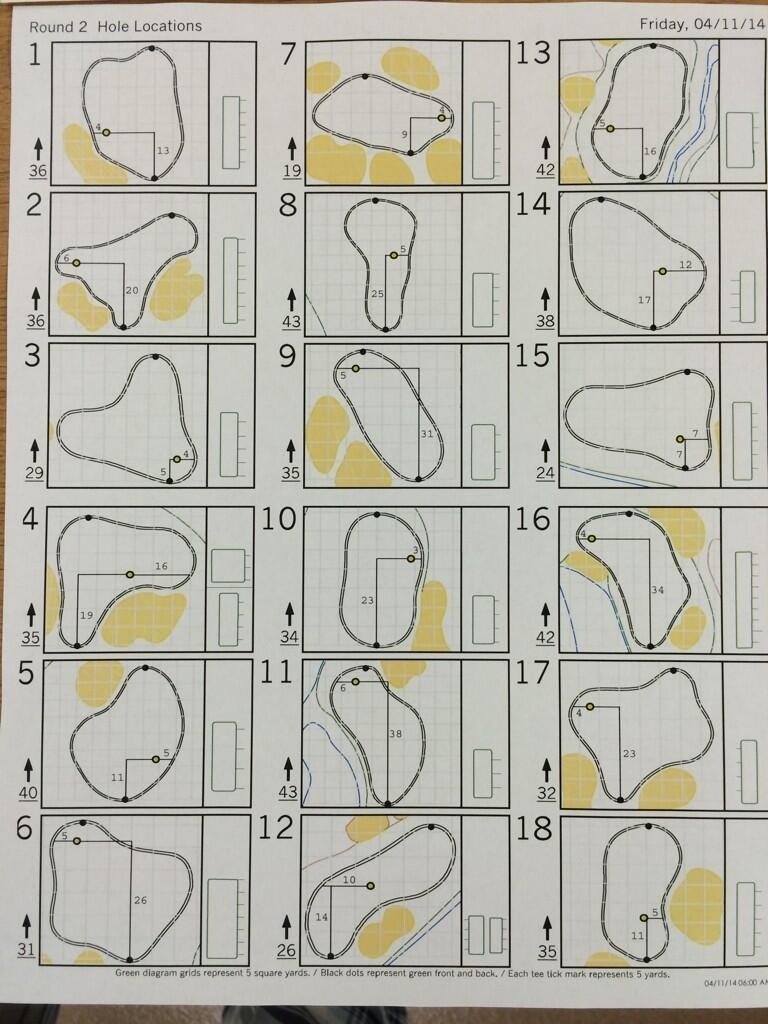 It must be me… but it seems every time I turn on the TV to watch some pro golf, I see the worst ball striking I could imagine.
Today, I turn on The Masters for the first time this week, Jimmy Walker is hitting a 9 iron into 18 and leaves it 20 yards short of the left bunker. I know pros hit bad shots, I might hit a shot like that after not playing for a month, not stretching in the morning, and driving 2 hours to play golf somewhere, but that is just hard for me to understand. Thankfully there are no pictures on the scorecard, and Walker flips a wedge in using the backstop and rolls it down for a kick in par.

Hopefully we’ll see some good stuff this week from these guys like Sunday last year.

The greens are getting so hard and fast, almost nothing is holding. The difference between holding the green and rolling off the back is a matter of inches. 13 almost everyone was rolling it off the back of the green because the green wasn’t accepting any shots.

I watched Phil go front bunker-back bunker-front bunker on 12 to record a 6. Then Rory hits his just a foot longer and rolls it up tight (missed his birdie putt).

Well done Olie! Oliver goss, the boy from my club royal Fremantle has just secured the low amateur title by making through to the weekend. A few frothies being drunk in Fremantle this weekend.

Some corner pins there. No doubt Bubba took advantage of his superior shot making skills to work the ball into those pins.

A few frothies being drunk in Fremantle this weekend

And in Knoxville because he is a fellow Tennessee Vol! 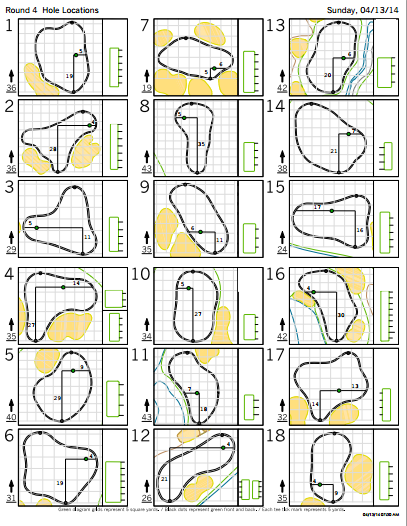 For those here on ABS who have worked on or through Module #2, take a close look at Spieth’s foot action. It’s very good.

It just doesn’t seem the same. I used to watch as much Augusta coverage as I could but just can’t get motivated to do that anymore, but I watched a few holes here and there and found a new diversion:

Ya’ know how a first base ump will use two senses to make a call- while looking at the bag only, waiting for a foot to plant and the sound it makes, he is listening- not watching the ball in any way- waiting for the ‘pop’ sound a hardball makes smacking into leather. If the sound of leather precedes the sound of foot hitting bag along with the additional sight variable of seeing foot hit bag as an additional input, the runner is out.

Assuming the television audio is properly linked with the video, I was listening for the strike while watching the right foot seeing who leaves it early by getting out toward their toes. Interesting television anyway.

Some of the clubs Bubba hit was absurd.

Good for Bubba. He hit some nice specialty shots and that drive on (13?), 360 yards was ridiculous. I thought Bubba and Jonas Blixt were the only ones releasing the club on a consistent basis throughout the round. I was impressed with Blixt and think he held up well, just didn’t have the lines, maybe. I think he can win one.

Jordan Spieth will win one too, but he stopped releasing the club on a lot of shots starting at no. 8. He had one greenside bunker shot on the back nine (front right) where he released the club fully and thought maybe he would use that sensation on the next tee and going forward. Kid is smart, smart and will win a lot, I’ll bet.

I thought the telecast was lacking even in light of the foregone conclusion. Lots of unnecessary,distracting camera switching. I’m surprised b/c that truck crew (Lance Barrow directing?), is the elite at CBS Sports. There’s nothing worse than following a drive and squeezing in on the ball as it bounces to it’s stop. No perspective, no drama. But really it’s a tight finish that influences the quality of the telecast and brings out the best in the truck and camera crew.

Congrats to Bubba. Considering he was hitting the ball 16 miles I thought he hit it pretty Strait.
Other than a rough Saturday with the putter he was a lot of fun to watch.
Jordan did great too, just started hitting some loose shots. But he is 20 so there is plenty of time.

If that is what the world’s best can offer up on the game’s most glorious staging, I might just pass on next year.
That was a pathetic display of ball striking by both of them on the last nine. Dropping the club out of his hands numerous times, dumping the ball in the water, both spraying the ball all over the place, Bubba missing the green on 10 with an 8 iron, on 12 with a 9 iron, the wedge into 13 was horrible, Spieth’s iron into 14 looked like a 15 handicapper, Bubba’s go through the trees on 15 with a three shot lead… glad he pulled off the huge gamble.

The golf ball and frying pan combo need to reeled back at least 50 yards for these guys. Hitting 340 yard drives routinely… what a bore.

To me, this is an event formerly called The Masters. I don’t know what to call it. Maybe it should go back to being the Augusta Invitational.

In an event… that at one time…year after year… would bring the cream of the game’s elite players to the top of the Sunday leaderboard…it sure isn’t doing that now.

Bubba averaged over 300 off the tee and hit 71% of the fairways… Very impressive. I was literally laughing when he hit the shot on 15. Who would do that with a 3 shot lead? haha but I guess that’s the way he likes to play