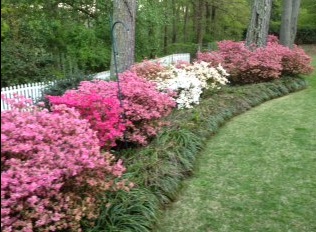 The azaleas were early, and some are starting to wither already…but with Tiger peaking and showing renewed promise, there should be plenty of energy and excitement in Augusta. 

Lag, I remember you mentioning a while back in some thread that you have old footage of the Masters from the persimmon era. Don’t you think the time would be perfect to post that in the Classic Golf Rewind section now as the modern tournament is about to begin?

Did you ever get some white bib overalls to wear while doing your yardwork. I would if I had azaleas on my grounds.

How about marketing some white bib overall pajamas down there…but we couldn’t sleep in a green hat now could we.

The echoes in the pines…

Lag, I remember you mentioning a while back in some thread that you have old footage of the Masters from the persimmon era. Don’t you think the time would be perfect to post that in the Classic Golf Rewind section now as the modern tournament is about to begin?

You must have been reading my mind… been working on converting video files to flash as we speak.

Mid to long irons coming into #10 and #11. The green was designed to accept lower trajectory shots being deep but narrow in width.

A lot of 7 irons being hit into #12. Basically 6 to 8 irons which has the ball coming into that shallow green quite a bit lower in trajectory which really makes the hole much more interesting.

#18 was only 410 yards, but straight uphill, and some of the guys would hit iron off the tee to lay back of the left bunker, then come into the green with a 4 or 5 iron. Most of the guys were hitting 6 or 7 iron in if they hit a perfect drive.

What everyone seems to forget is that Augusta is all about the relationship between trajectory of shots and shape of the greens. This is how great courses are designed. If you overlook that element you are not making a great golf course from an architectural standpoint.

Did you ever get some white bib overalls to wear while doing your yardwork. I would if I had azaleas on my grounds.

How about marketing some white bib overall pajamas down there…but we couldn’t sleep in a green hat now could we.

The echoes in the pines…

Not yet RR. But I do have some vintage white Cons like those guys used to wear to match the overalls. Will never forget how relaxed, cool, and casual they looked as they lounged on a hill beside a bunker while the golfers played out a hole.

I’m looking forward to a great Masters this year, should be exciting if things go to plan.

Unfortunately for some, it’ll be an unbearable viewing experience, though no doubt they’ll watch enough of it to know all the bad parts

My outside money is on Martin Keymer, a terrible record there, though a great golfer maybe ready to prove a point.

Lol Bom. Yes it is sad that the only reason some will watch it is so they can whine about how bad it was afterwards.

Personally I like the new changes to the course :-p

The Masters is always a pleasure to watch. Surely the thought of how much better it could be will enter my mind a few times, but I will enjoy it nonetheless.

Funny video Styles, thanks for posting

In case everyone doesn’t know, some cable providers (AT&T U-verse) are picking up the traditional internet coverage so you don’t have to watch it on your computer…

Tiger interviewed today, he played 9 holes, hit 7 drives and had 7 mud balls. There goes pretty much any chance of a shorter hitter this week. Let hope there is no more rain so it doesn’t become the usual boring putting contest.

Ineteresting comparison between Tiger and Jack from 15 years ago, be interesting to see how different that is this week. 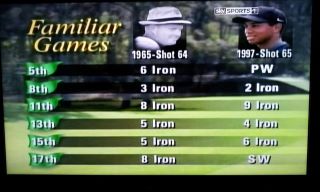 Ineteresting comparison between Tiger and Jack from 15 years ago, be interesting to see how different that is this week.

That is interesting. I wish they would have that info for every hole, over multiple eras.

What would really be interesting is what Tiger will use this week. The specs they show are for Tiger 1997 which I think was when he was still using a steel shafted driver and the titleist blades (mizuno copies) IRC. Alot of technology has happened in even those 15 years for Tiger. Let’s see what he specs up against his own 1997 tournament.

Not to mention the “Tiger proofing” that Augusta National has done since then to lengthen the course. Hard to compare eras even a decade ago since the ball keeps changing, the course keeps changing, the equipment keeps changing. Imagine how long/wide a football field would have to be if they allowed the Nerf spiral football to be used by the professionals. Instead of 10 yards for first down it would have to be 30. Oh wait, they did a commerical like that and Deion Sanders looked pissed off at the same time Troy is all smiles…

If someone is following Tiger this week, can you write down what he used on those holes so we can have a somewhat comparison to what he is hitting today.

The difference in the course conditioning was incredible. In 1972 you saw ragged edges around the bunkers; weeds/grass in the creeks, and greens full of multi-hued splotches.

In 1982 you saw a generally neater environment.

In 1992 everything was perfect. No ragged edges. Manicured creek beds. Perfect greens. The whole place looked like a 200 acre pool table with felt slicked down with Brylcreem! No wonder the tournament became a putting contest.

I went to the Masters for the first time in 1988 for a practice round. I had never seen anything like it. It was incredible…200 acres of perfect grass. It even felt like walking around on a pool table. I feel sorry for the people who go for the first time now. They will never experience that perfection. I went yesterday, and the course was beautiful, but it looked like many other courses I’ve seen. It’s not unique anymore, and it just doesn’t feel as special. The golf challenge may be greater with the first cut, but the visual spectacle is sadly diminished.

ESPN Classic is running half hour highlights of classic masters tournaments today. Right now is 1982. Worth watching if anyone gets ESPN Classic.

How short is Mickelson’s putter? Looks like a kiddie club, 32" if that? Official Uh-oh and provisional on 10, it’s a tradition unlike any other… Where’s Kenny in the tower when you need him? I can hear it now, “It’s been raining for two days, the golf course is receptive to every shot. It’s right there in front of them and I don’t see anyone taking advantage of it. These players have to understand that no one is going to give them a Championship like the Masters, you have to take take it. I just don’t understand the play we’re seeing… Lets go out to Verne…”

Feherty just said something that sounded like D Clarke was from the Midlands, that can’t be right… I thought only communists that made those terrible old Land Rovers that came apart at the seams were from the Midlands.

When was the last proper Masters played in your mind?