I don’t know if any of you caught this, but Mac is indeed playing at the Australian Senior Open:
pga.org.au/default.aspx?s=pg … e&eid=6404

Tied for 5th I believe…

I’m glad it was 2500 miles away - I would have been annoyed missing it.

Ya, that would be cool. I mean I’m sure some people would react negatively to that… but I think people from the ABS clan would love it.

Thought you may also be interested to know that Mac O’Grady used persimmons and old 1974 Hogan irons while playing in the event in Perth. Nice touch of his to honour the late Roger MacKay.

Also see his remark about any club being easy to hit once you’ve mastered persimmon.

American Mac O’Grady’s round may not have been as good as he would have wanted but he earned the admiration of spectators and fellow players for including former Australian PGA champion Roger MacKay’s old persimmon woods in his bag.

The two-time US PGA Tour winner is one of the purists of the game and wanted to honour West Australian MacKay, who died of cancer in 2002. O’Grady’s simple philosophy to the game is that any club is easy to hit once you’ve mastered a hand-made persimmon wood.

I’m nothing but glad to see Mac… beat me to it! It certainly makes the argument that I put forth a while back, that the there is nothing wrong with vintage gear… and on the right golf course, you can do fine competing with it. A fifth place finish in a very strong field brings home to point.

Good stuff, Lag - thought you’d like to know about that. I also saw this comment about Mac made by Mike Clayton on another website which you may find good food for thought and comment:

he hits the wooden driver at least 250 yards and often times, further.
On the range he turned it upside down and swung it left handed and flew it 250. Staggering.
He argues that he plays with guys now who ‘I used to bomb it by who now hit it past me - and they are not the ones doing the push-ups’.
It takes so much more skill to hit the sweet spot but when you do with a wood it goes very well - it is just that the game is ridiculously easy with frying pan heads on drivers - clubs that have been a catastrophie for the great old courses.
Then there is the throw-away line that ‘players are so much better now’
How would you know until they played with the old equipment?

Reading that Mac used persimmon has pleased me no end. Great that he put in a good show too… he can talk the talk and walk the walk…

After Griffo, str8 and I played with the vintage gear a couple of weeks ago, I have played a couple of old courses since then with the modern gear, and its clear to me that its not as much fun as it is with the vintage. on the right course, I would love to go out with the old gear on one of the tours and put persimmon in the bag when the opportunity arises… doing the business in a tournament against the top boys with the old gear… now that would be job satisfaction!

My argument has always been that the game is more interesting if you have to drive the ball in the fairway, and if you are in the rough, you typically have to play a run up shot into the green… not stop it on the green with a space age ball, milled faces and sharp edged grooves.

If the whole thing is to make the game easier, then just make the hole bigger… that would make it easier… and more fun for your average golfer… so they could shoot lower scores like the pros…

But… no money to be made with a bigger hole… so instead of playing a really wonderful traditional game that requires great skill, we get a watered down version of the game that is overpowered by big publicly traded companies that hire powerful lawyers to stiff arm the regulatory bodies of the game into equipment rules that help shareholders with a complete disregard for the game’s traditions and existing establishments.

The obvious argument is that “The game has always changed”… yes this is true… but not to the extent that is has recently to where the majority of the games finest courses are basically slated as obsolete… or re designed - reshaped in a way that completely obliterates the strategic intentions of the original designer.

I don’t see chess players making the pawns move like rooks so it would easier to take opponent pieces and make the game easier.

that way you play the game you like… Indy or Nascar, 100 meter or 400 meter. Street track, dirt track. It should happen.
Why are golfer so close minded? Other sports split all the time. Clearly there must be interest in the traditional game… the entire history of the game is based on it.

Suppose that in 1985, a promoter came out and said “we are going to start a new tour where the pros can use frying pan size drivers, and golf balls that fly 400 yards… long putters you can fixate on your body and grooves on clubs that will spin the ball from anywhere.”

That would be the oddity, not the traditional game that basically went unchanged since 1935 or 50 years.

I’ve beat this topic to death since I returned to the game in complete shock and horror!

I think your preaching to the choir. Where are you going to play the first inaugural “old school” tour event? When will you hold it spring, summer, fall?

The PGA will sanction it. They must have some desire to preserve the history of the game (and they want to make money) - PGA Tour, Champions Tour, Nation Tour, “Old School” Tour. What name do you envision for the new tour? The equipment companies will get behind this because they will want to capitalize on selling the equipment. John Erickson, the tour’s first commissioner will kept it pure, classic, and historic. Hopefully I’ll be good enough to play in it someday.

Here’s a great Golf Digest article from 2007 I stumbled across “The Shape of Shotmaking.” Great insights from some of the old-timers and pretty good arguments as to why today’s players are ignoring it. 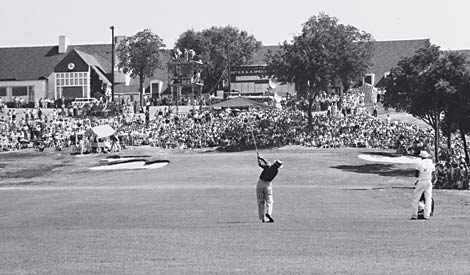 Mac could probably play with a mixed bag of right and left handed clubs and still score par or better. The guy is way out there when it comes to ball striking abilities. If anyone practices hitting from their opposite side it automatically improves the dominant side. There are now studies that are starting to prove that the brain rewires itself with ambidextrous training.

I gotta chuckle at the journalist’s line about Mac’s ‘simple approach to the game’…Obviously he has never sat at lunch with him going on ad nauseum about the 26 Perfect Positions of the Golf Swing. I like the idea of the Persimmon Tour, but what about the Ball? The Ball has bacome so much more the problem than the clubs. More than wondering how the big boys would fare with wood driver, I’d like to see the US Open scores at a 7700 yard course if they were all using Titleist Tour 90s and Maxfli HT Tour Balatas. Remember when thinning a 9 iron meant turning the ball into a duck egg with a big fat smile? Remember smashing drivers that balloon a mile high and plug in the fairway at 240? And remember when a tight lie from 90 yards meant leaving half the cover i n the grooves? I’d pay good money to see that on tour nowadays. I love talking like an old timer at the ripe ol’ age of 35.

This is all still new to me due to a golfing hibernation, but there is a gap of knowledge I need filled.

Lets say I don’t disagree with LAG at all about how important feel is with a driver, is there other reasons a persimmon performs better than a titanium? I guess my question is, does a titanium technically lack any accuracy compared with a persimmon, or is it just that talented players just can’t get a feel for their driver properly and have lost an important factor in hitting the ball straight?

Not that I’d be able to find a decent left handed persimmon too soon anyway?

Woods had a bulge/roll effect
A strike towards the heel or the toe would have an adverse affect on the balls rotation.

I haven’t heard much discussion for years on bulge and roll of a club head, but the subject has come up rather often lately. It is becoming a point of discussion because of various OEM commercials. In the past when clubs were made of persimmon wood it was somewhat common to hear discussion of bulge and roll. This was because it could easily be changed by sanding down the head. With today’s steel and titanium heads changing the bulge and roll is impossible.

On off center shots the clubhead rotates around its center of gravity causing a sideways movement of the point of contact. This places sidespin on the ball, which normally causes an undesirable hooking or slicing to take place. Bulge compensates for this hooking and slicing sidespin by intentionally starting the ball farther out to the right on toe shots and left on heel shots. This allows the hooking or slicing spin to bring the ball back toward the target.

The commercials mentioned above speak as if their club is the only club with bulge and roll. In all the years I have been building and repairing clubs, I have never seen a wood head without bulge."

here’s a pic describing it- the pic is obviously not a wood!! but you should get the idea 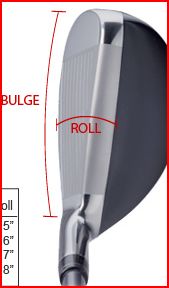 Beautiful explanation TM, I completely agree with your thoughts on Roll, I could never understand why it was there, I always found it counterproductive and in fact I asked a lot of clubmakers about Face Roll and never got a satisfactory answer, always just that this is the way it has always been. If Face Bulge is there to self correct off-center hits, then why not invert the Roll to to do same. It would look quite bizarre, but if it works, I could get used to it. It would make it more dificult to shape the height on tee shots, like when you tee it down a bit into the wind but I’d be fascinated to mess around with a driver or 3 wood with inverted roll just to see what would happen.

I’m imagining that roll has a softening affect on the bulge in the four corners of the face preventing it from starting the ball too far off line when hit there. This being a compensation for the lessened impact the COG would have out in the corners to bring it back? While having an inverted roll would then eliminate the possibility of having any bulge at all? I think. I’m trying to picture it in my head but it’s like that painting where all the stairs go nowhere so I’m not 100% sure

Very interesting stuff…
Has anyone hit or got any thoughts on the quality of Louisville Persimmon Drivers?

Has anyone hit or got any thoughts on the quality of Louisville Persimmon Drivers?

I have hit some trial ones (see pics), and they perfectly ok but hand on heart I couldn’t tell you that I liked them as much as plenty of other “vintage” persimmons I have. Really depends what you like. They only had a couple I could try and they had graphite shafts, slightly oversized heads and just felt light to me. They performed fine to be honest. I believe they do make classic orientated versions as well. I wish them well. 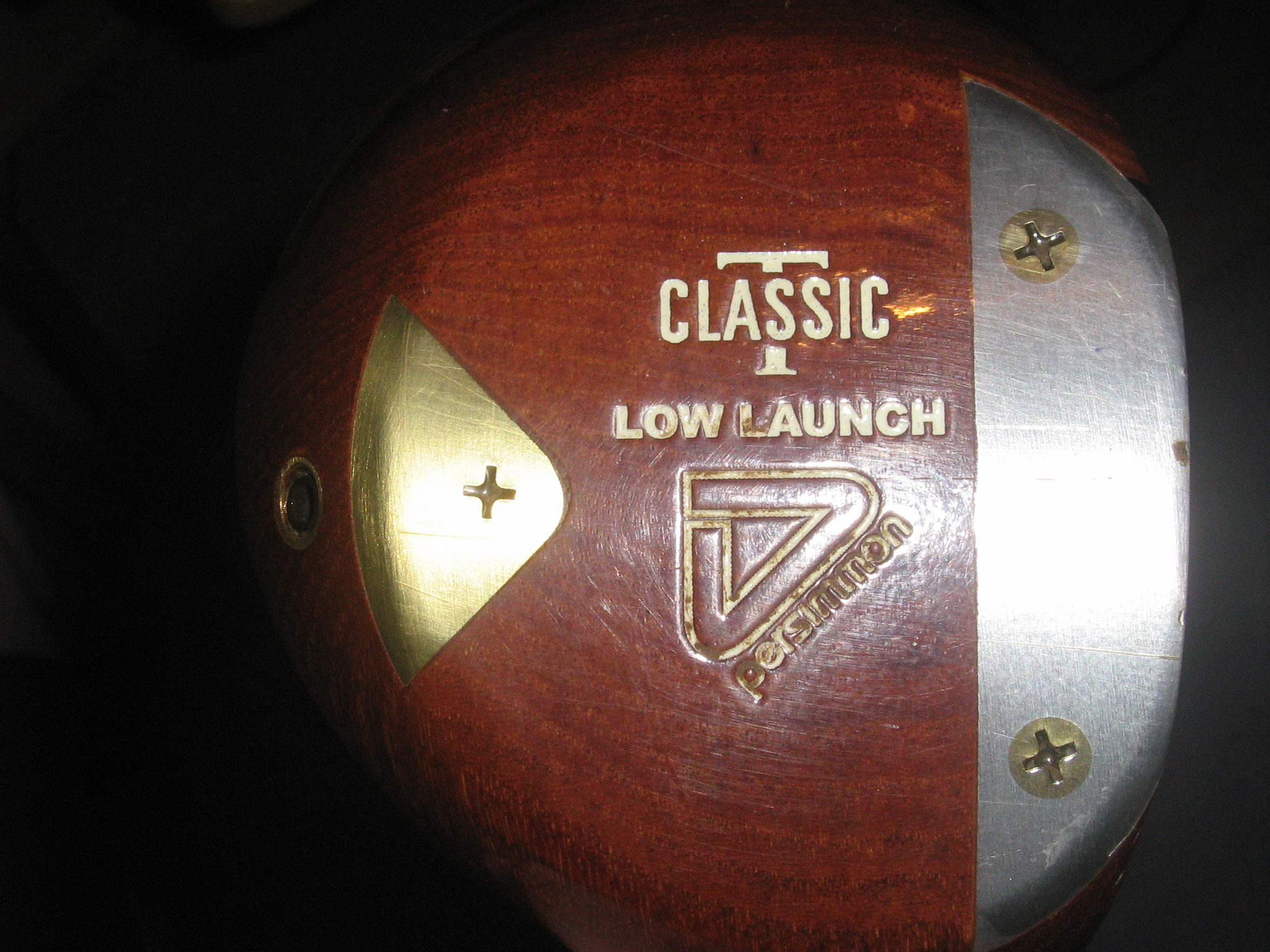 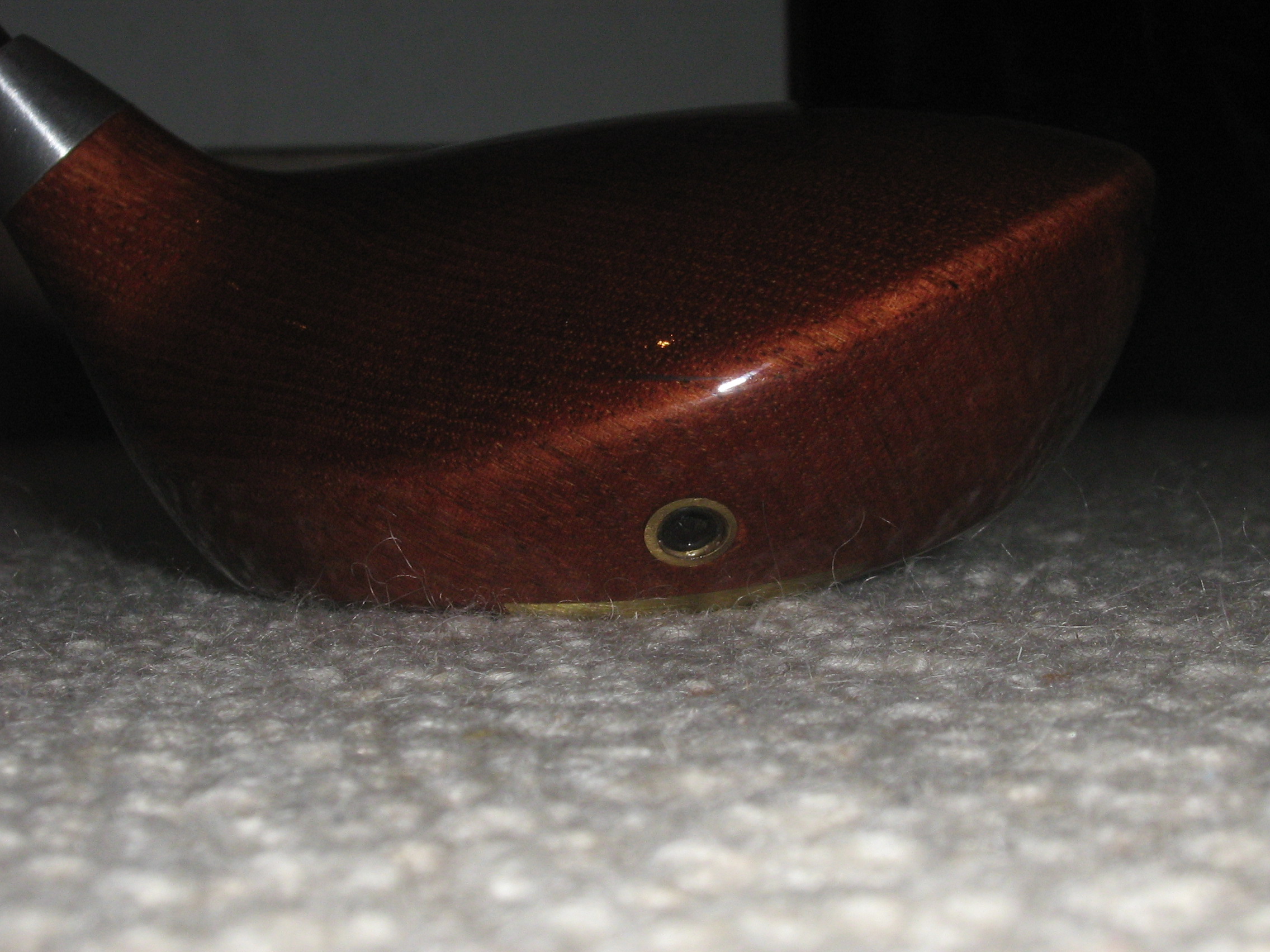 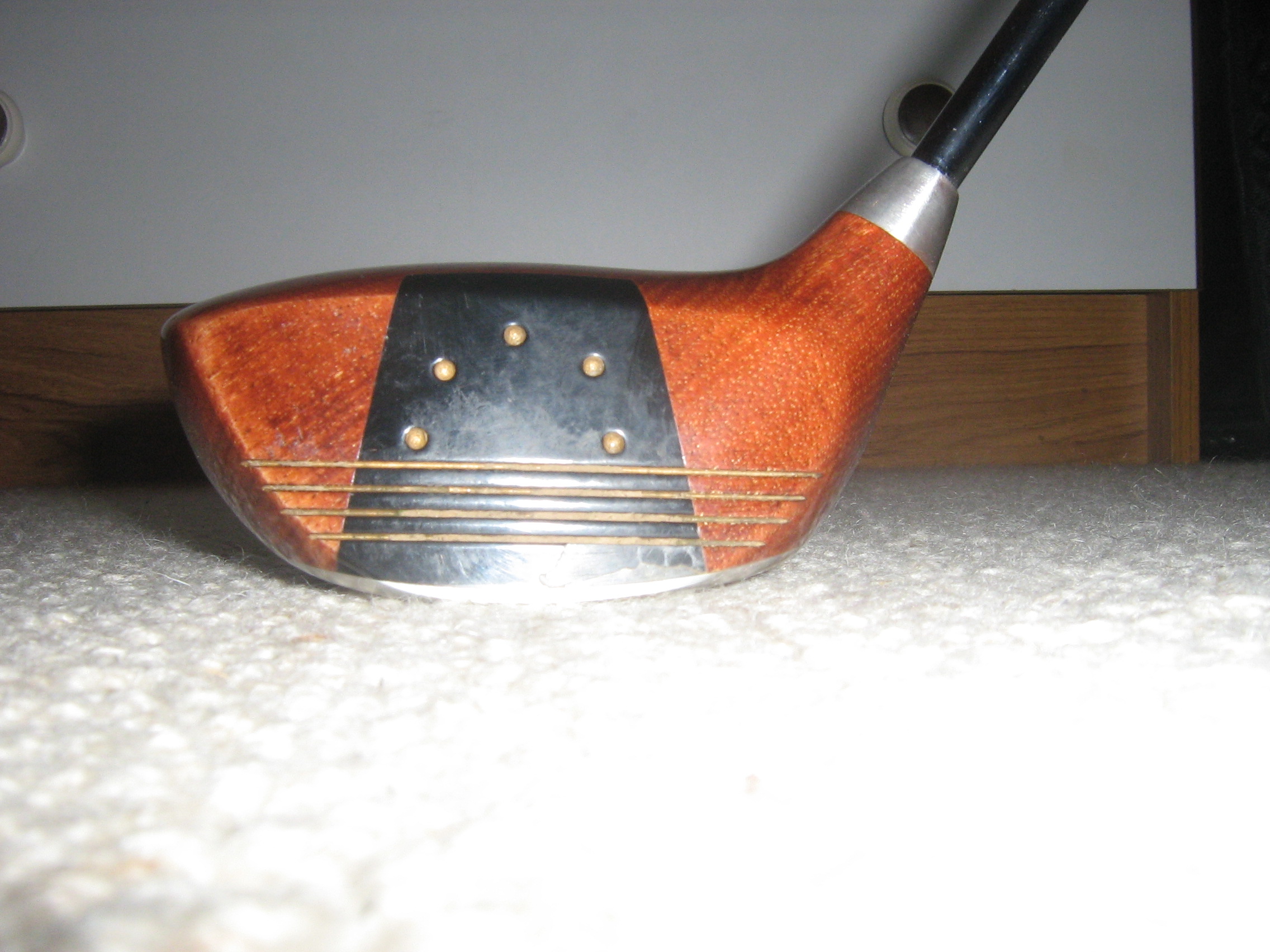