A few months ago I picked up a set of new Mac 675 V-Foil irons on ebay. I’ve always wanted a more current Don White designed set and these were shafted with the hard to find satin Proj X shafts (6.5’s) and were allegedly the “tour head” so I forked out a bit more than the normal vintage set cost.

I believe these came out in 2005 or 2006 and are an intriguing looking design with a progressively wider “muscle” as you get into the long irons. As you can see I had to use lead tape to get the swingweights up where I wanted them. Unfortunately during the flattening process two of the clubs developed a slight split in the hosel. My club guy didn’t think it would be a problem, but 2 months later the 6-iron now looks like this: 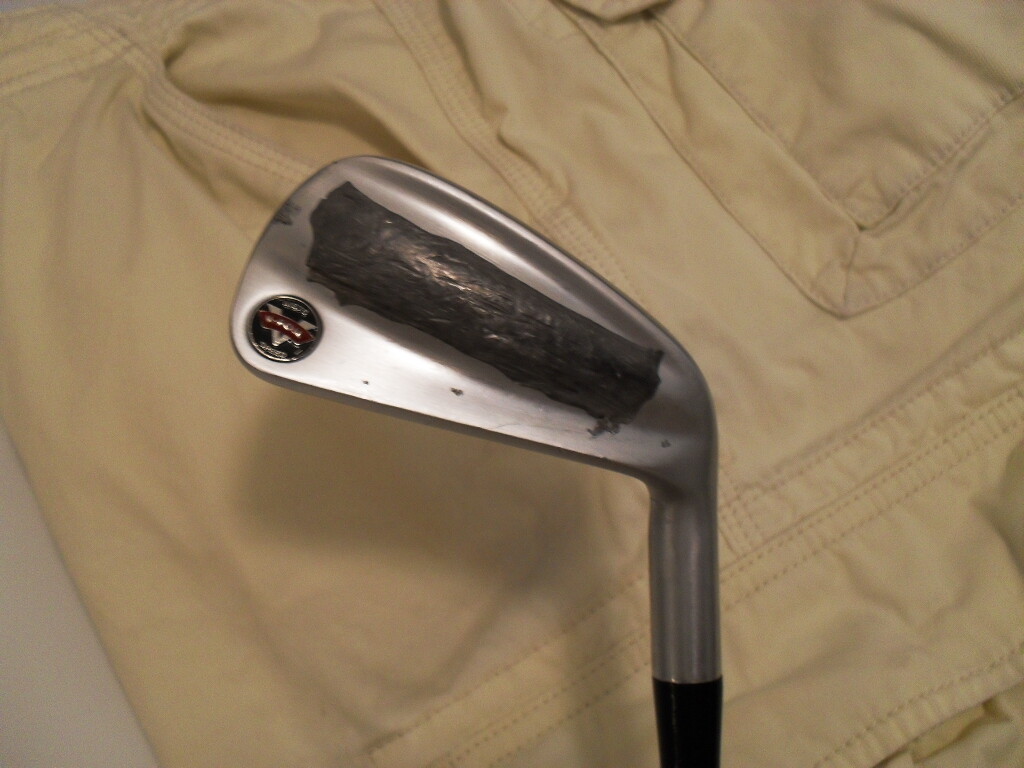 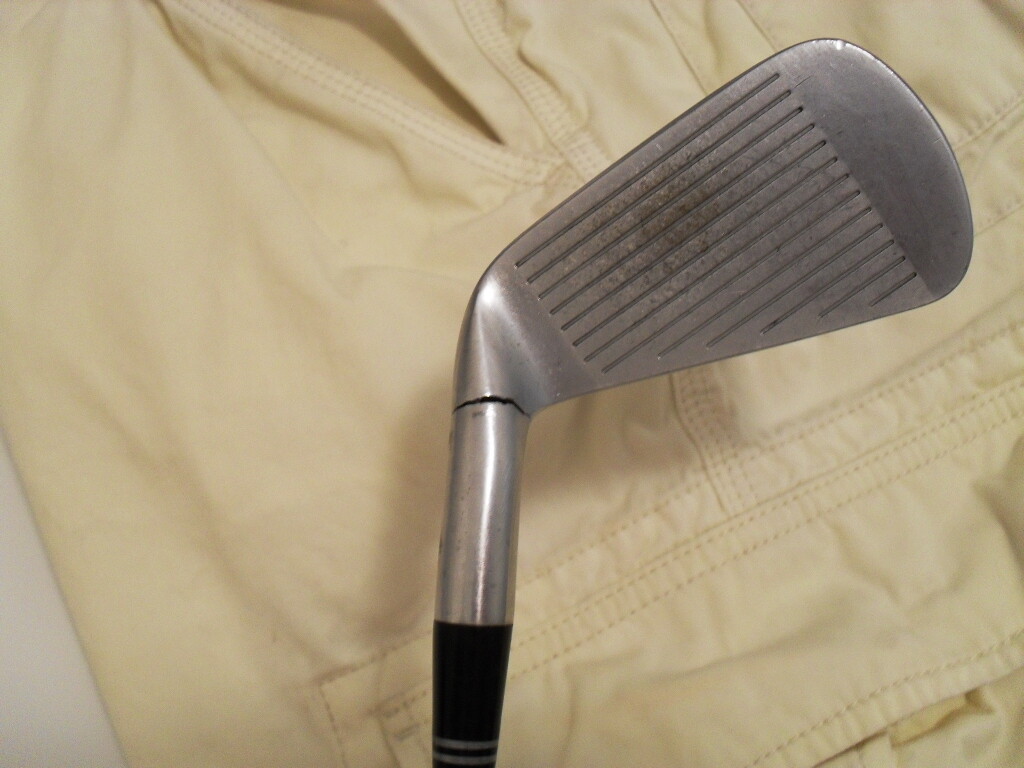 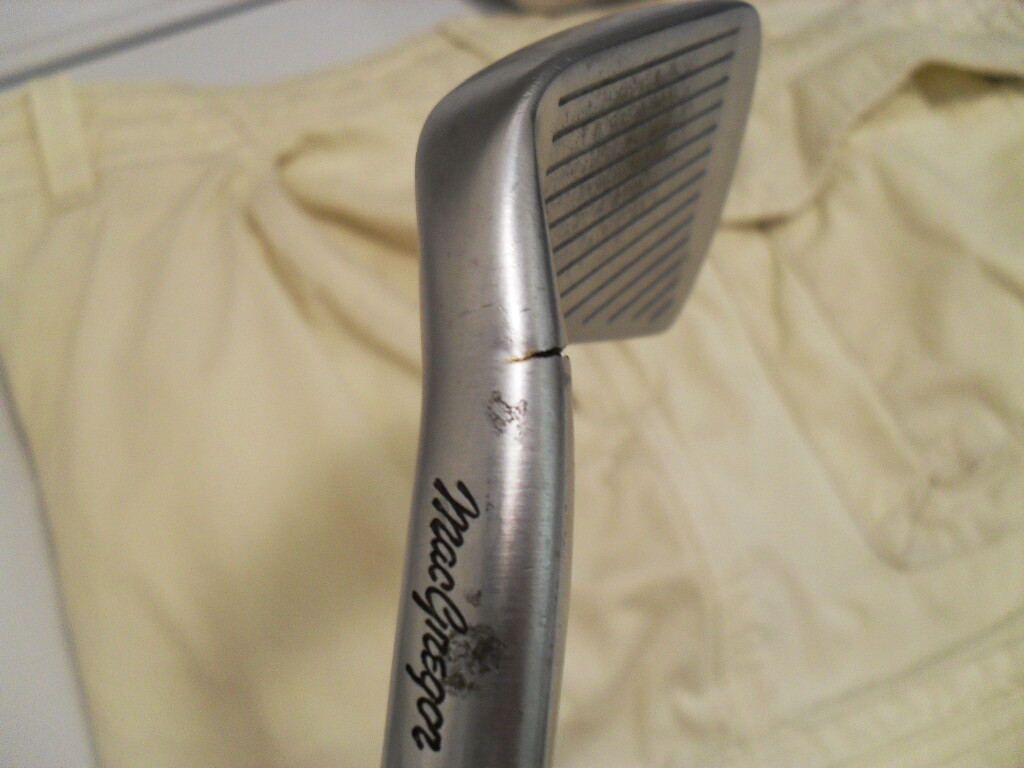 Needless to say this club is now out of play. This is the first time I’ve had this happen after having more than a dozen sets “flattened”.

What would happen if you tried to get the split welded? My assistant’s husband is a welder and I will ask him about the process and if he thinks it would work.

I’m sorry for your loss robbo! I hope that they can be welded!
I can’t help but think that the steel was not soft enough to cope with the bending / flattening of these beautiful clubs.
That being said; I think this could have been prevented if the hosel had been heated / softened with a blowtorch prior to the bending.

Bob - I was wondering about the welding as a possible repair as well. I’d be very interested in what you find out. I may also contact The Iron Factory to see what they think.

IOZ - you may be right. This club repair person has always done a great job on lie alterations for me. My guess is that he’s used to me bringing him older and probably softer forgings. This set may indeed have been different and a little heat prior to bending might have prevented this.

Getting a replacement 6 iron could be a bit complicated. There are some on ebay but they all have a different head stamping which (as I understand it) differentiates them as the “retail” head. The tour heads (that these allegedly are) have no stampings and are supposed to be slightly different in design and possibly performance.

Back to the Hogans for now… it’ll be like seeing an old friend.

I was at GolfSmith’s a couple of months ago and saw some of the MacGregor Pro M model irons set. I just happened to noticed what I thought was the same thing, except it was welded. I didn’t dare hit the club, but it looked like it was workable.

The finish on those look like the Mac satin finish on an investment cast head to me which is why it split. So many of the Macs made in the last 20 years have such GAWDAWFUL QC and end up having to be thrown away. It makes it worse that some of it really looks good and you want to fall in love with it but I learned the hard way to stay away from them like the plague. Sorry Rob but that’s terminal. Don’t throw good time and money after bad.

I dare say you’re probably right on these. I’ve played a couple of rounds with my late 90’s Hogan Apex (with 5’s in em) since this episode and I’m quickly forgetting about the Macs. I don’t dig the offset of these Hogans but I’ve been able to adjust and it’s a verrry solid feeling set. I’ve knocked a few pins down with them in the short time they’ve been in the bag.

I did like the shafts in these Macs so I’ll pull em and use them again.

Lesson learned on this one,