Louis was so kind to send me some of his recent swing clips. For those of you who know or have heard of Louis, then you’re aware of his reputation as one of the dangerous ball strikers down in the Peachtree State.

Louis and I roomed together at the Junior World Championships in 1980 and followed similar paths through the US Collegiate program, then playing on the international pro tours after graduation.

Always a top tier ball striker, I have been hounding Louis for some swing clips to put up here for some time. It was nice to find this in the mailbox this morning!

Louis also has a fine reputation as an instructor, so if we all hold our breath long enough, maybe we can get Louis here for a bit of commentary on his swing thoughts and ideas that made him such a successful player throughout his career.

Justin,
Thanks for the pics there also on Lynn’s site. Yes a great swing the downswing just pure straight lines all the way you wonder how he ever hits a bad shot been fortunate thru Ted Fort to see his swing and listen to the stages he works on. Thank you Louis for letting others see a great action.

Very nice. That third frame is pure gold there… lots of club saved up!

Unlike Johnny “Lag”, I didn’t grow working with a swing guru. Good setup basics, rotating around a steady head and axis, and maintaining good rhythm were the only keys I really had. Noted Jupiter Hills instructor Bill Davis was a big help in the refinement of my game through college and my touring pro years. He taught every aspect of the game - swing, short game, shotmaking, the mental game, etc., and serious players need that.

I understand there was some confusion about my swing being posted on Lynn Blake’s website. One of my friends here in Atlanta, teaching pro Ted Fort, filmed my swing and put it up there. While Ted and I have consulted together on a number of occasions, I haven’t worked with Lynn. I know what I need to do with my swing to hit the ball well, and Ted is one of several people I talk to about it. The basics in my swing have been solid for a while now. My main focus now is my plane. When I get the club hitting my elbow plane pretty early in the downswing, very good ball striking usually follows. In the 70s when I was a kid, so much emphasis was placed on turning the body and driving the legs. I have had to work to overcome some problems stemming from that. When I work my lower body correctly, I can keep the club on plane so much better. When I don’t work my lower body correctly, it moves in toward the ball a bit in my transition and can pull me off plane.

Good work with the site, John.!

Lou, thanks for clearing that up…

Out on tour, you were always considered I think by most to be in the very top tier of flushers… I still hear stories about rounds you played most recently, one at Industry Hills in LA (one of the west’s toughest tracks) where I think you shot the course record.

I know you were always concerned with a crossed the line move at the top, which we see a lot of great players do, including Nicklaus, Gil Morgan, and Gay Brewer. There’s certainly an argument for such a position at the top, as it can move you very nicely and logically into an inside quadrant delivery upon the golf ball. I remember you swing back then moving from there into a very deep position of the shaft behind your body coming from the inside, then you rotated your hands very strong into the ball with the arms staying pinned upon the body through impact minimizing clubface rotation through impact. I also remember some clips of you really keeping your right arm bent very long post impact.

This is a concept that is mentioned in TGM but certainly lost or falling on deaf ears with all TGM instructors that I know of.

Any thoughts on your right elbow moving through impact? … or how you find that deep shaft position on the downswing?
Also you swing has always been very rotary looking, very level with the shoulders moving through and beyond impact. Wonderful stuff…any thoughts on that as well?

A clip of that wonderful swing…

Thought I’d bump this up to the top for re-review.

Holiday stuff was going on, and I had to miss the live interview with Louis this afternoon. Hopefully it will be available to hear.

I was in awe of his ballstriking and play when he was growing up…he must have weighed 135 pounds soaking wet as a teenager, but could rip it. He was and is smooth as silk.

Isn’t that a “flip” in frame 5 of the topset picture? Such a fast rotation of the forearms/wrists turning the club face over?

you have to remember that at P4, once the torso has rotated around, you are essentially looking at a DTL view from a caddy view due to the rotation. Also if the player is actively resisting the CF uncocking tendency, wristcock can be increased as the club loses velocity… depending upon other things also like it a big divot was taken.

A flip look is not always a true flip… you have to look at what the pivot is doing also…
If the shoulders go steep, and things stall, then that’s a recipe for flip. 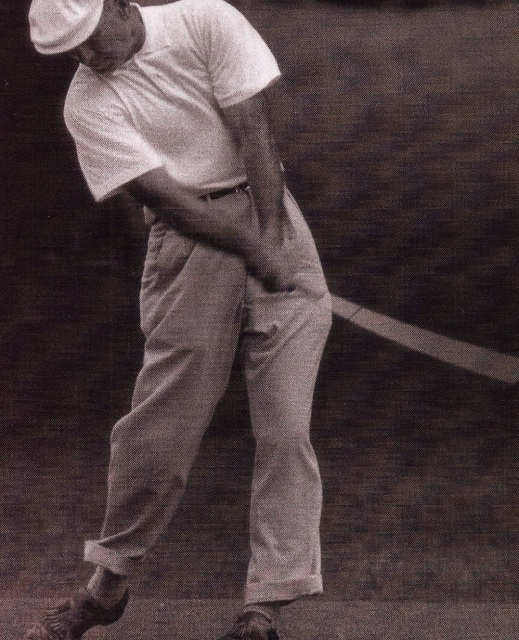 sure, because CF does not want that… it wants the left arm and shaft inline. So the fight goes on post impact.
When the torso turns around left, that roughly 120 degree angle gets held… call it a flip if you want, but I’ll call it as
I see it… a flush…

The golf swing really needs to be understood in 3D not 2D. Why? Because unless you are a cartoon, when we swing a club, it is in fact 3D.

I simply cannot properly value a players golf swing until I see both front and DTL views… I need that to construct a 3D image in my brain of what is going on. All the module work is always two views because of this.

The problem with swing plane analysis is that it is typically viewed as a 2D thing. That’s reasonably acceptable from P3 to P4, but if we are going to create an on place action through the hitting zone, we need to be entering and exiting from beyond a 2D realm… because this is the only way you can properly pressure the shaft which ultimately creates an on plane strike through the impact arena pinned by forces not just passively aiming. It’s an enormous lightbulb moment for those who can really wrap their heads around this… difficult to do, because you simply are going to have to feel this within the body, not just look at it on the drafting board or an LCD screen.