“There is no such thing as a natural touch. Touch is something you create by hitting millions of golf balls.”
Lee Trevino

" We learned the game differently, on bad grass and good grass and a lot of bad lies, we had more shots. So I don’t think the best players are as complete today, simply because they didn’t have to learn what we had to learn. Being a shotmaker was a forced necessity. [size=150]Today’s golf laboratory is sterile. It doesn’t call for anything[/size]. "

Between Mare, Lincoln Park and the Presido, I have three very unsanitary labs to work in!
Lots of viruses at these old courses…

I should play each one of them 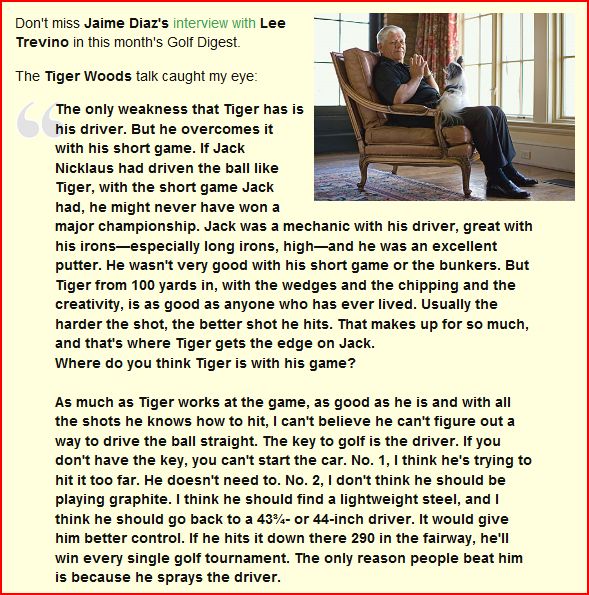 It seems Tiger avoids all the tight courses like the plague… and because of his attendance draw, the tour has gravitated toward more and more wide open golf courses to promote “Tiger” style golf…

On the PGA Tour… what is left? Pebble, Riviera, Colonial, Harbor Town… maybe one or two more…

The rough is not that big a factor, and with the grooves in the irons… and milled faces makes the rough a non factor.
Drives going 350 yards puts a short iron in the tour players hands for all par fours.

Tiger has no motivation to change. I blame the tour for caving in to the likes of one player… more than I would blame Tiger.

And the gear follows that entire paradigm.

Tiger doesn’t have to drive the ball straight… neither does Phil, VJ or any of the bomb and gouge guys winning out there…
Perfect greens make it a putting contest.

Not like he’s my favorite person in the world but I think Tiger, for him hits it really straight. Remember where he comes from, dynamics-wise. He used to be so CRAZY STUPID RIDICULOUS INSANE LONG that he could barely keep it between the fences. Ever see anyone plug 3 wood in the front grenside bunker on 17 at Pasy? How about cut driver 9 iron, #1 Spy? Nobody, I mean nobody hit it where he did. Hell ya he plays the courses that set up good for him, anyone would. And to his own eye he’s Radar Reid compared to the way he used to be. 56 wins this decade, next closest, Hogan 52 in the '40s. No one else close. Playing the minimum number of events give or take. Every year. Not counting International wins. Not enough?

“Before we build a course with deep bunkers, railroad ties, forced carries and water everywhere, just remeber that no Donald Ross course has ever gone Chapter 11”