Is it possible that my laminated woods feel at impact softer than persimmon?
It feels like persimmon = cast - laminated wood = forged! Just my subjective feeling. 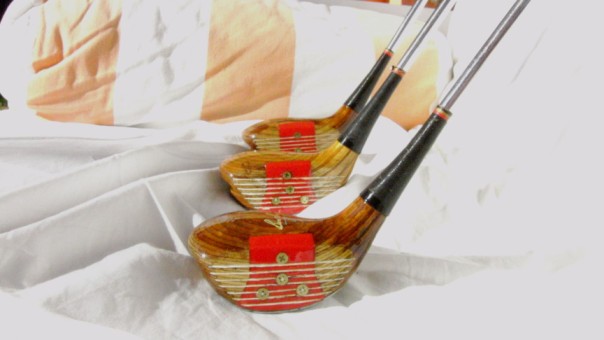 Someone else had experience with both?

I had to lenghten my Speedslot 404 set, so they are over 14 ounces and play between
D7 and D9 which is my prefered swingweight for woods…

Maybe it is just the honeymoon phase…

I remember a fair amount of discussion about the pros and cons. Some believed that the glued layers were stronger than a solid block of persimmon or that hitting into the cross section of the layers added density. But I have seen a few come apart over the years, splitting and separating… so it probably depends.

But by far and away, the majority of good players and touring pros preferred the unity of one piece of persimmon over laminated blocks.

I’m sure the roots of laminated blocks was aimed more at cost cutting than function.

One deserves a place in my golf bag, the other my fireplace IMO

I have the book, The Hogan Mystique, and some of the photos in it clearly Hogan with laminated woods in the bag (at least the fairway woods, I can’t tell for sure on his driver). I thought this was interesting when I first saw it but I have yet to see any other photos of his personal driver. This was later in his career during when he was using Ben Hogan equipment.

If anyone is curious I can try to scan the photos from the book to show everyone, but I am not sure how well the details will show up.

Hogan was also running a company in his later years… and having to deal with the costs of supplies and materials making clubs for the entire range of the golfing public. The most important thing is that the club is weighted and set up correctly. But with persimmon so cheap to start a project with these days and all the ebay stuff so cheap… I don’t see any reason to work on a laminated club. If only for the aesthetic of it… a solid block of wood is going to be more visually desirable for most.